Our mission is to reform the institutions and structures holding women back from getting involved in politics. Recruiting, training, and funding women candidates will be more effective once our electoral systems stop systemically disadvantaging women.

Below are suggestions on how to dismantle these barriers for women candidates.

The U.S. Constitution provides few guidelines for how we elect our representatives, yet many voting rules and standards have hardly changed over time. While other countries, such as New Zealand, Mexico, and Sweden, have embraced contemporary voting techniques that improve representation, the U.S. system is past due for modernization. Consider the following chart, for example.

Of the 37 members of the OECD, many of which are our close allies, the top-ranked countries use proportional voting systems and gender quotas - both improve representation outcomes for women. The United States, with it's single-winner winner-take-all elections, ranks 25th in the OECD for women's representation in the House of Representatives. Of the 190+ countries monitored by the Inter-Parliamentary Union, the US ranking is even lower.

At RepresentWomen, we believe it is vital that we pay more attention to what our peers are doing to elect more women. The US is already fortunate to have a robust women's movement and, increasingly, greater numbers of women are running for office. What we need next is a system that is fair for all candidates to run in. Keep reading to learn more about how parity is over a century away with our current system and what we propose instead.

What We Have: Winner-Take-All Elections

Most of the U.S. uses single-winner, winner-take-all elections. This means everyone in a community votes for their favorite candidate. The candidate with the most votes wins the election and represents the whole community, even if they have failed to win a majority (50%+1) of the votes.

Our research (2016, 2020) shows this type of election disadvantages women - especially women of color. It will take multiple generations for women to reach parity if we keep this antiquated system.

Here is how winner-take-all elections are disproportionately bad for women candidates:

What We Need: Fair Representation Voting

The alternative is fair representation voting, which combines

Multi-winner districts - districts represented by more than one person.

Candidates do best when they attract a strong core of first-choice support while also reaching out for second and even third choices.

How Does RCV Work? Facts on RCV 2020 Report RCV in Oakland RCV in Cambridge RCV in NYC

Compared to winner-take-all elections, ranked choice voting in multi-winner contests allows more diverse groups of voters to elect candidates of choice. This promotes diversity of political viewpoint as well as diversity of candidate background and demographics.

Increasing the Seats in the U.S. House of Representatives

The combined importance of name recognition and money in our current political system results in a nearly insurmountable incumbency advantage. While this seems like a gender-neutral problem on the surface, in reality with the majority of incumbents being men, it has a profound gendered effect. While ranked choice voting and multi-member districts would help to mitigate some of the advantages enjoyed by incumbent officials, increasing the number of seats in the U.S. House of Representative would create more open-seats, which in recent years have seen the highest number of women win.

The current 435 seats in the House of Representatives, has not changed since 1963. Currently, there is on average one voting representative for every 747,000 constituents; this is one of the highest constituent to parliamentarian ratios in the world. Montana has already surpassed the 1:1million ratio, with 1.05million constituents being represented by one member of the House.

Increasing the number of seats in the house with help improve women's representation:

Read more about the systems reforms RepresentWomen supports and the Congressional legislation we endorse to ensure more women can run and win elected office.

What We Can Do: The Fair Representation Act

The Fair Representation Act (HR 3863) gives voters of all backgrounds and all political stripes the power to elect House Members who reflect their views and will work constructively with others in Congress.

Under the Fair Representation Act, there will be more choices and several winners elected in each district. Congress will remain the same size, but districts will be larger, each electing 3, 4, or 5 winners. Voters will be free to rank their choices without fear of "spoilers." No district will be “red” or “blue.” Every district will fairly reflect the spectrum of voters. 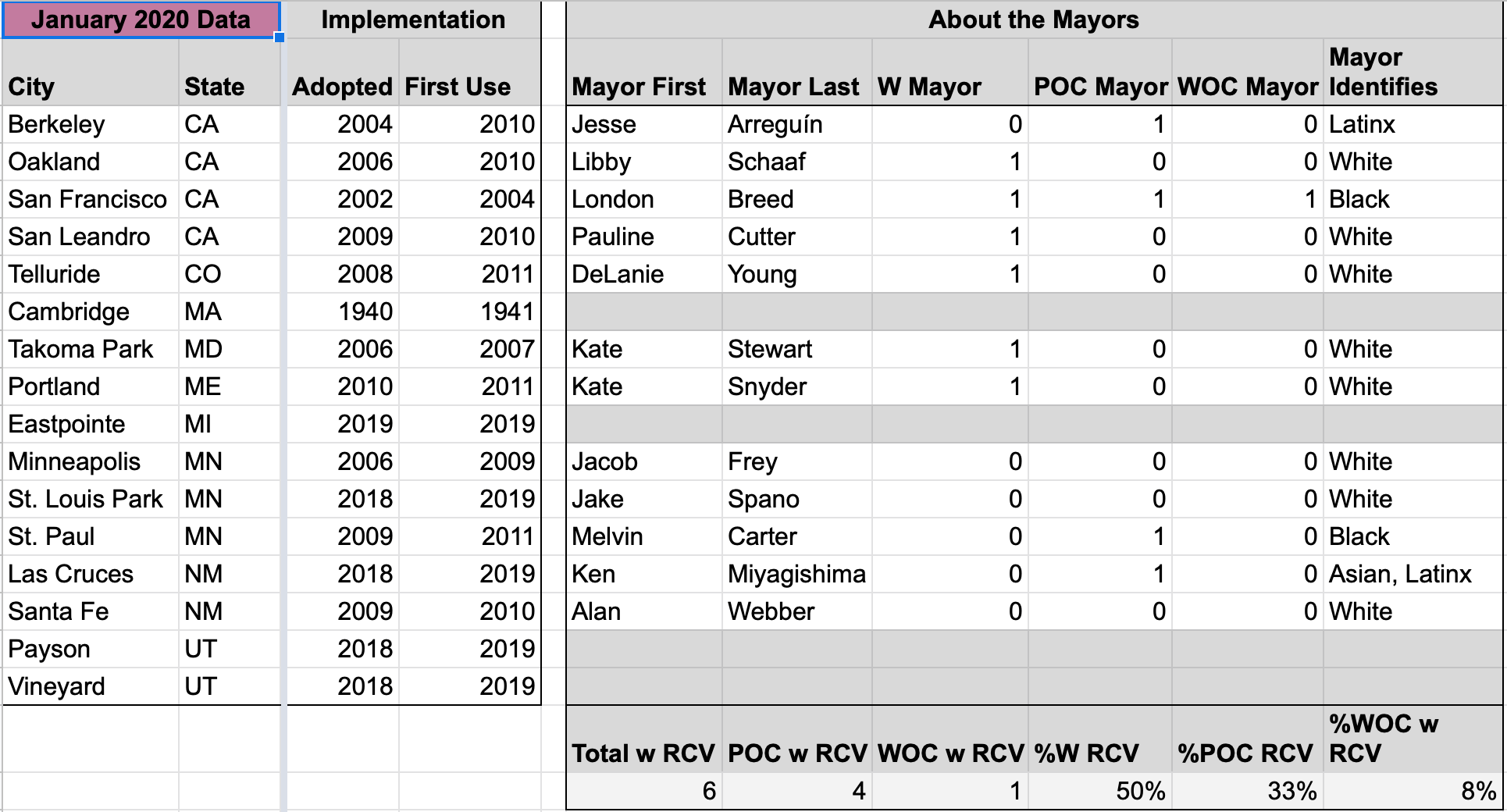 Women serve as governors in only nine states (3 Republicans and 6 Democrats), making it one of the most underrepresented positions. Only 45 women have ever served as governor of a state, and 19 states have never had a woman governor. Ninety-three of the 310 elected statewide executive positions (30%) are currently filled by women.

Ranked choice voting would help to represent states more accurately and to dismantle the overwhelming incumbent advantage that puts women on an unequal playing field.

Some states have incorporated multi-member districts into their state legislatures, and RepresentWomen believes every state should move in this direction. When districts are represented by more that one person, constituents are more likely to have representation for their divergent views, and elected officials are more likely to come from diverse backgrounds and have diverse views, better reflecting the American people. This is particularly true when ranked choice voting is combined with multi-winner districts.

Every year, RepresentWomen grades and ranks all 50 states for gender parity at the local, state and national levels. To see how each state ranked view the map below:

Other countries provide a model for how to elect more women

For example, the Australian parliament contains two chambers, the Senate and the House of Representatives - just like in the U.S. Voters elect the Senate through a form of proportional representation, while the House uses a winner-take-all system.

The graph below shows the stark difference in women's representation between the two chambers and their different electoral structures. The graph also shows the U.S. House of Representatives, which has consistently lagged behind the proportionally represented Australian Senate for over 70 years.

To learn more about the intentional electoral actions taken around the world see our international dashboard below:

How can the U.S. get back on track? The Fair Representation Act

The Fair Representation Act would create multi-member congressional districts and implement ranked-choice voting for congressional elections - all across the country.

This bill would restructure the House of Representatives so it could accurately reflect and represent the people of the U.S.