Post-Soviet States: Learning from Women Amid a Battle for Democracy and Gender Equality 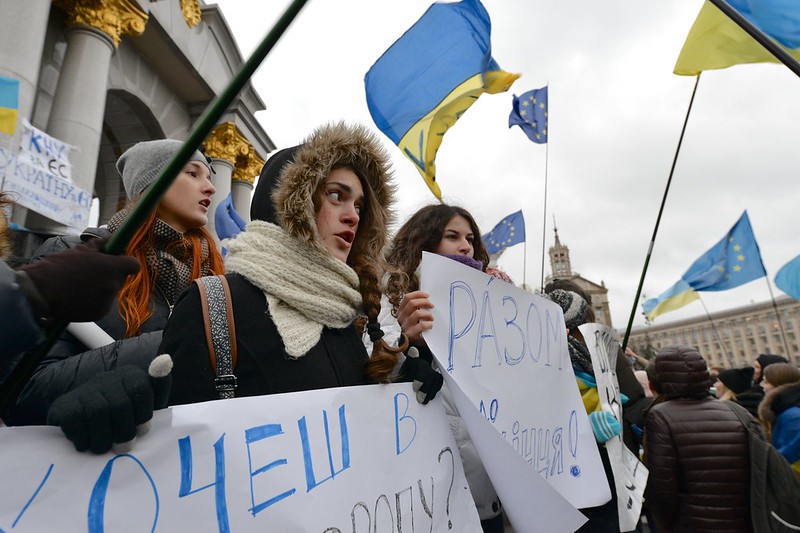 By Alisha Saxena and Kaycie Goral

Thirty years ago, the world’s largest country dissolved: The Soviet Union broke apart into 15 new and independent states, leaving a region comprised of some of the world’s youngest nations and democracies to date. The roots of today’s crisis in Ukraine grew from said breakup, becoming a flashbulb for the growth of authoritarianism across the globe.

We must address this moment and reflect on our democracy by examining post-Soviet state’s numerous battles for free and equal democracy.

The United States, one of the world’s oldest democracies, is now seeing a rise of antidemocratic views—not only among citizens but at the heart of the country’s politics. Extreme political and cultural polarization has aided in this. As a result, the U.S. has a lower freedom status then countries that have experienced multiple military coups and now invasions.

The conflict in Ukraine demonstrates that misogyny and authoritarianism walk hand in hand. Though we cannot claim all post-Soviet states are flourishing democracies, and we absolutely cannot claim that gender is central to the conflict in Ukraine today—we can assert that the fight against autocracy and the establishment of a free and fair nation relies on bringing everyone to the table. Women included.

New research from thinktank RepresentWomen shows that intentional strategies in the region have bolstered representation in many post-soviet states. Beneficial techniques which are often overlooked or outright rejected in U.S. Politics.

As part of their international research series, RepresentWomen’s brief on this region shows gender quotas or something similar might be an interesting lever for increasing women’s representation and overall fairness in government.

With the United States far from achieving a gender-balanced government and having never elected a female head of state, strategies that mimic gender quotas (like recruitment targets for political parties and funding targets for PACs) might be helpful if the U.S. is to reach gender parity in our lifetime.

It is important to note that authoritarianism, patriarchy, gender-based violence and misogyny are all predominant motifs in the post-Soviet region, with Freedom House ranking eight of the 15 states as “not free” and another four as “partly free.”

These cultural biases limit post-Soviet women’s agency to fully participate in national politics. Instead, women in the region primarily engage in political change via grassroots organizing and local politics. Strategies such as quotas and national equality initiatives further support the work of women activists by trying to level some of the mountainous political playing field.

While women’s caucuses and government initiatives lack adequate funding and resources to enforce political equality in this region, many governments have also adopted formal national action plans. Something we’re still fighting to achieve in the U.S.

Although there are unique challenges faced by the post-Soviet nations—they continue to remember the women. Their efforts and intentional strategies to achieve gender balance continue to provide crucial insights.

Comparing the U.S. progress to these much younger states shows our true lack of authority. While the states in this region are far from perfect, some are employing intentional actions to change—fighting to bring women to the table. And they are succeeding.

Changemakers and activists alike in the U.S. should take note, as one of the oldest democracies and as we continue to fall in global rankings for equality. In the words of Vice President Kamala Harris, “The status of women is the status of democracy.”

As of this month, the U.S. ranks 72nd for gender parity in government, but we cannot sit on our laurels and wait for change—for a remarkable woman to simply make her way over the barriers baked into our politics. To make substantial and sustained steps for women’s equal representation, we must look to how other nations address systemic issues and learn from their success.