From sports, to TV, to government; this week was chock full of updates on women's representation. The RepresentWomen team is excited to bring you all the latest news rundown while I have been working hard during my travels. The team has been getting ready to release our Ranked Choice Voting in NYC Report and we cannot wait for you all to read it soon! 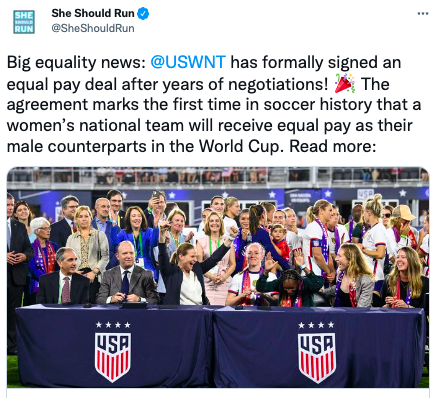 Back in 2019, the USWNT filed a lawsuit against U.S. Soccer on the grounds that they were discriminating based on gender due to unequal pay, leading to a bargain agreement announced back in May. Last week, both the men's and women's teams signed the agreement that finally guarantees equal compensation:

On Tuesday, each team signed a collective bargaining agreement, both of which run through 2028, that sets a standard for equal pay through "identical economic terms," according to U.S. Soccer. The federation says both teams will get the same compensation for all competitions, including the World Cup, as well as the same commercial revenue sharing mechanism...

"It's so good. It's such a proud moment for all of us," USWNT forward Megan Rapinoe, who served as a face of the equal pay fight, said after the bargaining agreement were signed. "...That same 'never say die' attitude we had on the field, that's the same vibe we brought to this. So, it's a super proud moment. Really excited for everyone and really excited to see where this pushes the game up."

U.S. Soccer President Cindy Parlow Cone, the first woman to hold the position and a former USWNT star who won two Olympic gold medals and the 1999 World Cup with the team, said the deal will have global repercussions. 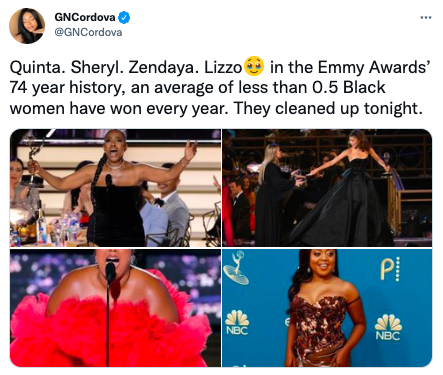 At RepresentWomen, we're continually talking about how representation matters. This message remains true, whether it be in our movies and TV shows or our elected offices. Seeing more Black women finally be represented in media has undoubtedly made a monumental impact on young women, from Halle Bailey as the Little Mermaid to Lizzo, Zendaya, Quinta Brunson, and Sheryl Lee Ralph winning at the Emmys.

Sheryl Lee Ralph was the first major win of the evening, winning the award for Best Supporting Actress in a Comedy Series for her role as Barbara Howard in ABC's breakout sitcom Abbott Elementary, followed by Lizzo winning her first ever Emmy Award (and being halfway to an EGOT!) for Best Competition Series for her Prime Video show Lizzo's Watch Out for the Big Grrrls.

Ralph began her acceptance speech with a rousing impromptu performance of Dianne Reeve's "Endangered Species" that brought the audience to their feet, while Lizzo reflected on being able to pave the way for diverse storytelling onscreen in hers.

Later in the evening, Zendaya accepted her second Emmy award for her starring role in the HBO drama Euphoria. She won her first Emmy back in 2020 (with a virtual ceremony due to the COVID-19 pandemic) for the same acclaimed role.

As you may have seen, during Quinta Brunson's acceptance speech, Jimmy Kimmel remained laying down on the ground next to her as part of a "comedy bit." I myself, like many others online, was disappointed that he took away from Brunson's moment. On Wednesday night, though, Kimmel apologized to her on his show and Brunson gave a full acceptance speech at the end of his monologue. 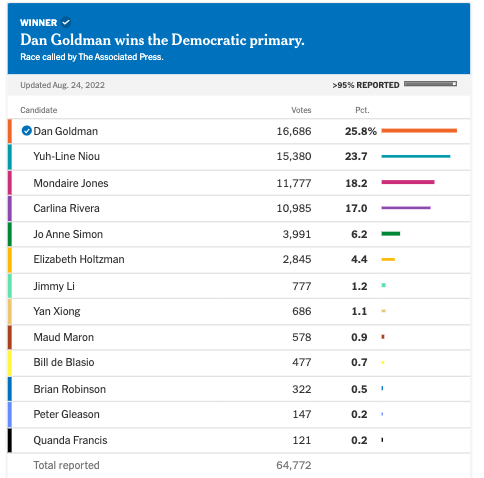 The results from the primary election in New York's 10th District, representing Lower Manhattan and Brooklyn, are in and Dan Goldman has emerged victorious. Winning with only 25.8% of the vote, he barely beat out woman candidate Yuh-Line Niou who received 23.7% of the votes cast. Goldman is just another example of how our current system favors candidates who are white and male and also why we need reform:

Unlike how Goldman won with just a slice of the electorate, ranked-choice voting requires a winner to have at least 50% of the vote. As the votes are tallied, less successful candidates are eliminated and their voters’ second and third choices are distributed to those remaining. The ultimate winner is the one who has garnered votes from a majority of the electorate.

This is a bit more complicated than a straight run-off among the first round’s top two or three candidates, but it is more efficient and less costly. New York City voters used this successfully in the 2021 municipal primaries and will again next year, with all candidates having to appeal to the entire district. In the end, the process reduces hyperpartisanship and assures a more representative winner...

While we are addressing reforms, we would be remiss to ignore that District 10 was a poster child for how money sometimes plays an outsize role in our elections. There is no question that Goldman’s personal fortune enabled him to blanket the airwaves and inundate voters’ mailboxes.

In Turkey, Semra Güzel, along with other members of parliament, have been sent to jail. Akshi Chawla in her #WomenLead blog spotlights what has been taking place:

Türkiye has been coming down heavily on the HDP - 13 MPs from the party have lost their parliamentary seats since 2016, and a dozen have been arrested so far. Several remain in prison, including senior leaders of the party.

The party has called this a plot and criticised the inhumane treatment meted out to Güzel during her detention. Videos show her being handcuffed and her hair being pulled as the police take her away...

Güzel is not the first Kurdish woman to be jailed by the Turkish state. In the early 1990s, Leyla Zana became the first to suffer the fate - she was jailed after she spoke Kurdish while taking parliamentary oath, wearing a hairband in the Kurdish colours: green, red and yellow. She was honoured with the Sakharov Prize in 1995.

Another article highlights the reaction to Güzel's arrest:

HDP Women's Council declared its solidarity and described Güzel’s arrest as an attempt by the misogynist state to distract public attention from its escalating abuses of human rights and political problems:

"You cannot cover up your own crimes with agitation and fueling nationalism, racism, sexism and misogyny. As women, we will not bow to this dirty politics."

On Wednesday, 21 in '21, an organization founded with the goal of achieving gender parity on the New York City Council, rebranded as The New Majority NYC.

21 in ‘21 aimed high and still overshot its goal. The organization focused on electing 21 women to the City Council in 2021 instead saw 31 women get elected to the 51-member body – good enough for 61% of the legislature. Now the hailed nonprofit is rebranding, looking to the 2023 City Council elections and beyond...

“The challenge that we’re taking on now is not just to achieve a very specific number in a very specific year for gender parity, but to say that 2021 was the year that we achieved authentic representation and we’re going to maintain it into the future" [said Executive Director Jessica Haller].

The New Majority NYC has been working with RepresentWomen to craft our Ranked Choice Voting in NYC Report explaining what factors, both systemic and organizational, led to this feat. Our executive summary for the upcoming report can be found here.

“Neither systems-level (term limits, small donor public financing, ranked choice voting) nor candidate-level (recruitment, training, support) efforts create sustainable opportunities for bringing more women to office,” the summary reads. “The secret to New York City’s success story is the ‘yes, AND’  approach that 21 in ‘21 took to incorporating a systems-level awareness to candidate recruitment and support throughout the 2021 election cycle.”

The organization's rebranding emphasizes that reaching a majority in 2021 does not mean the hard work is finished. Sustaining this majority will take just as much effort. Once released, the final report can be found here.

That's all for this week! I have been traveling to the Bay Area in California and Seattle, Washington to meet with amazing change makers in the democracy reform movement. After being in Jackson Hole, Wyoming this week, I will be heading to New York City for an upcoming RepresentWomen event!

Thanks for reading and have a lovely weekend. 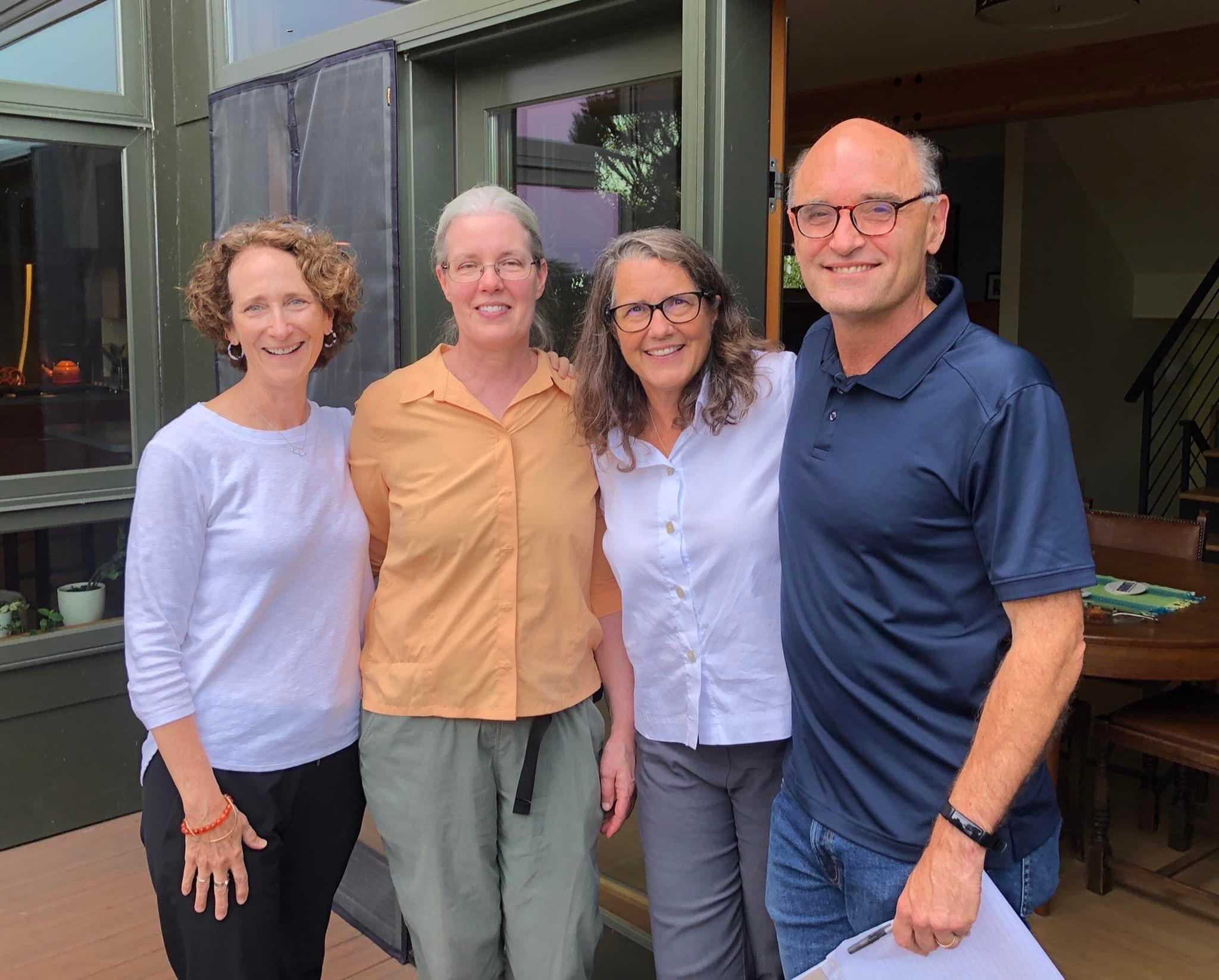 P.S. Have you had a chance to check out the Rules of the Game Podcast episode where Cynthia was a guest? Take a listen for a conversation on different aspects of electoral systems, the role of women in politics and society, and the strategies that RepresentWomen advances to build women's political power in the United States! 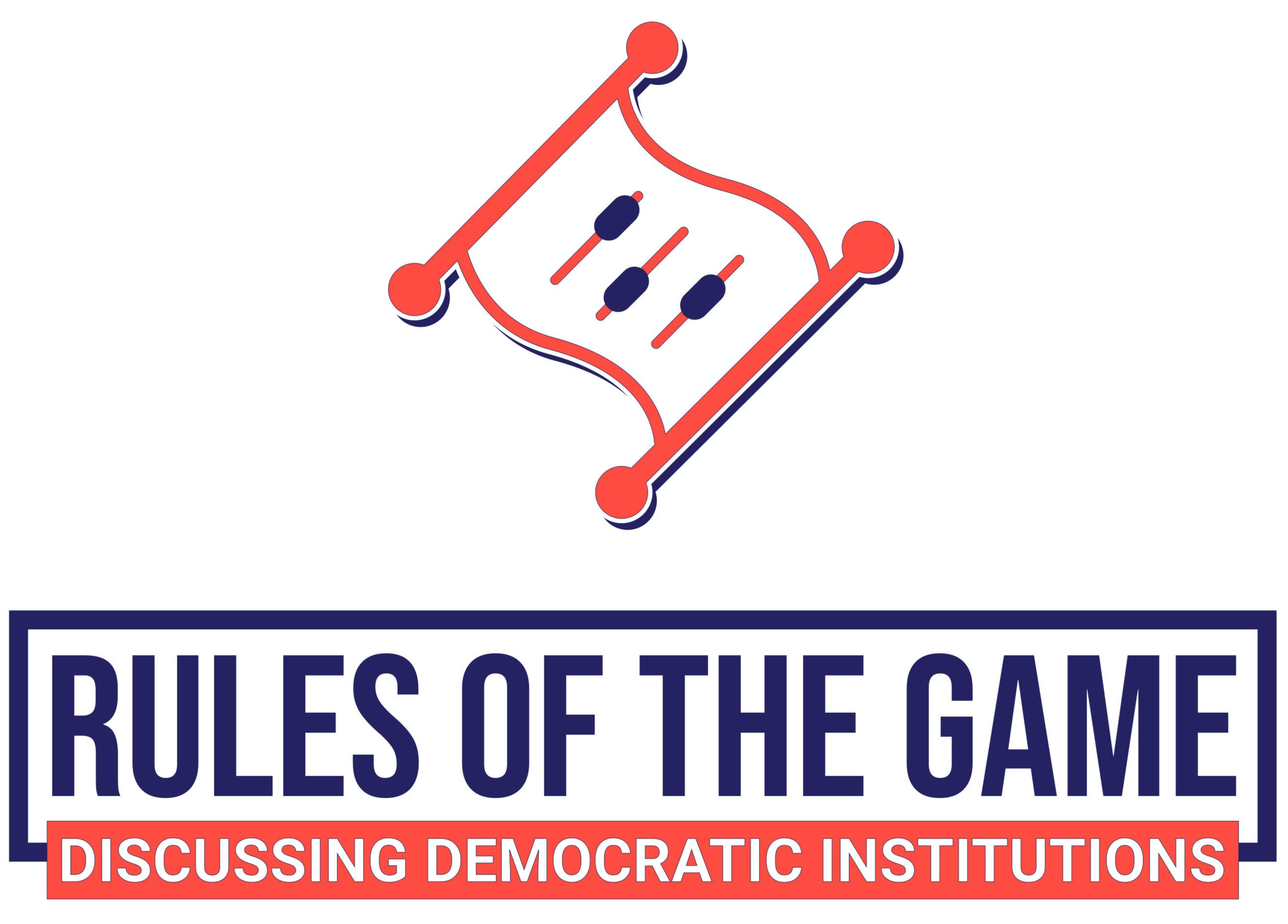