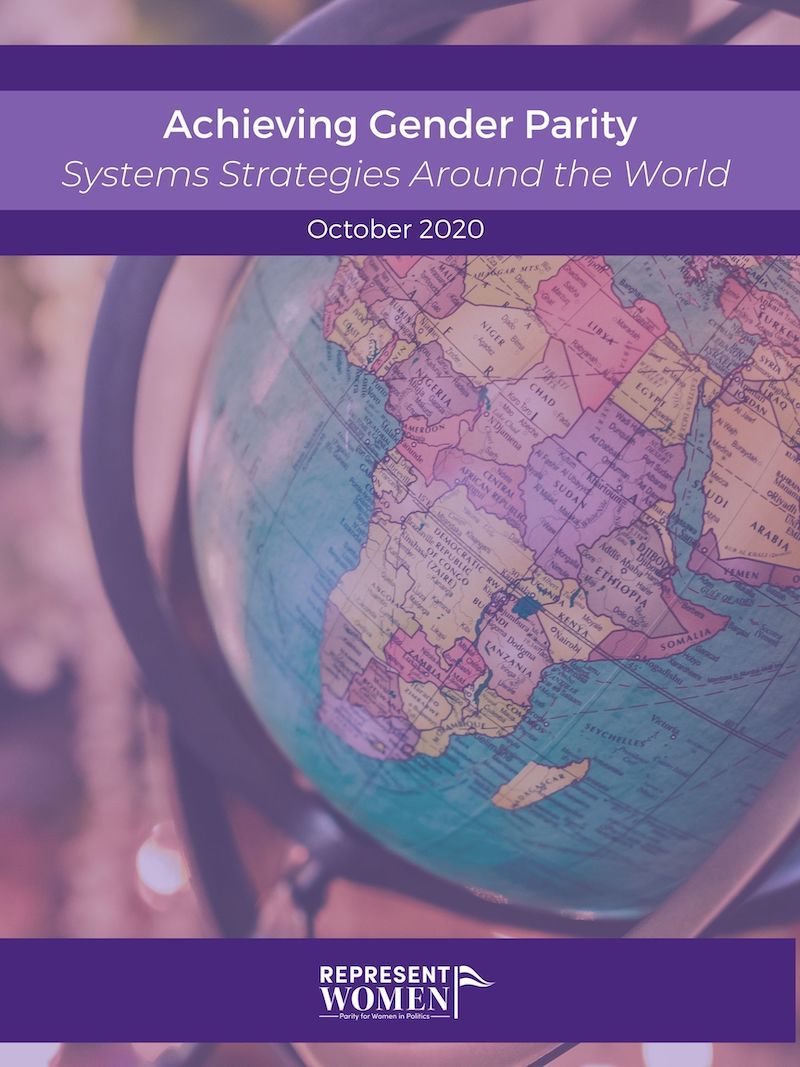 Dear fans of women's representation,
This week RepresentWomen released its Achieving Gender Parity: Systems Strategies Around the World report that offers a deep dive into the electoral systems, recruitment practices, and representation outcomes for women in nearly every country. Twenty years ago the United States ranked 48th globally for women's representation. Today the United States ranks 87th among nations for the number of women elected to the House of Representatives. Most of the countries in the top 50 for women's representation use a proportional or semi-proportional voting system to ensure more women win & some type of quota or temporary special measure to ensure more women run.
We study what's electing more women to office faster in higher ranked countries to ground our work for data-driven systemic reforms to advance women's representation and leadership in the United States in order to achieve parity in our lifetimes:
Between 2000 and 2020, nearly all parliaments around the world saw an increase in women’s political representation. In January 2000, there were 82 countries in which women made up less than 10% of parliamentarians, and as of January 2020 there are only 26 countries. Twenty years ago, no country had achieved gender parity in their legislatures, currently four countries are at parity with an additional 20 quickly approaching parity. And while the number of women elected to the House of Representatives has increased over the past two decades, from 13% in January 2000 to 23% in January 2020, the increase of women in the lower house has been slow in comparison to the 86 countries outranking the United States.

While the United States continues to use a single-winner plurality electoral system and leaves the recruitment of women candidates up to party discretion many of the countries  improving at a faster rate than the U.S. have adopted better recruitment methods, modernized workplace rules, and more representative electoral systems all of which help to improve women’s opportunities to run, win, serve and lead. In the past two decades many   countries have outpaced the United States in electing women to both the legislative and executive  branches.

Our single-winner plurality system maintains the status quo and hegemonic male leadership by favoring incumbents and discouraging competition. The United States can learn from and adopt the innovative strategies used in other countries to spark and sustain progress toward gender parity.
The RW communications team has developed some useful graphics that we will be sharing with allies in a separate email but here are a few examples: 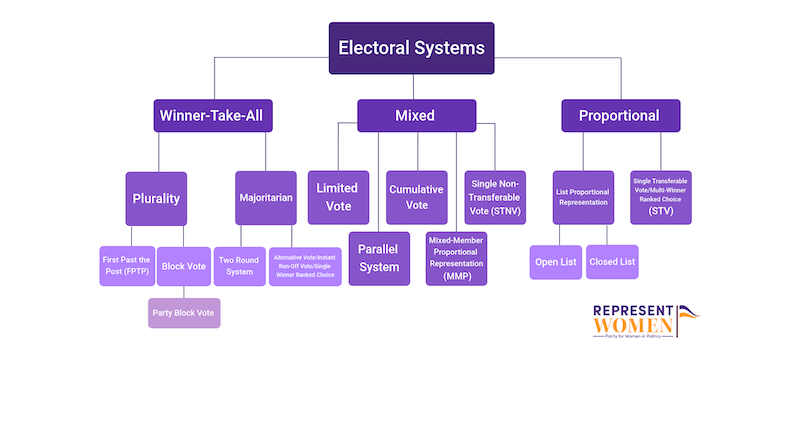 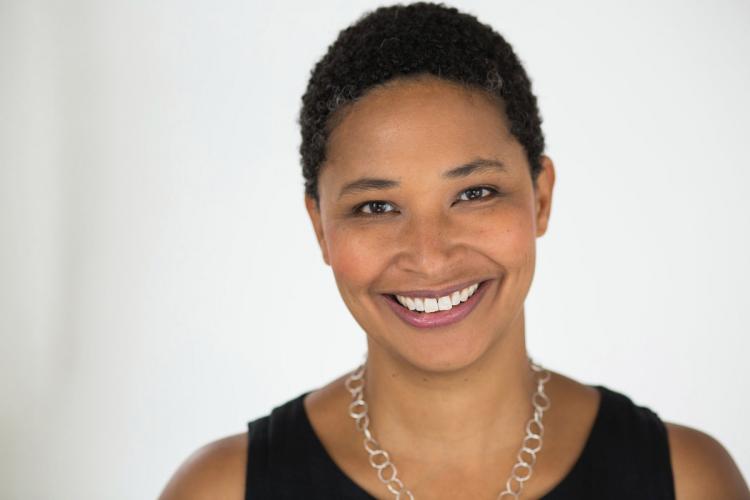 All eyes are on the races for the White House and Senate and the Amy Coney Barrett confirmation hearings. But potentially even more important to the long-term health of our constitutional democracy are reforms on the ballot in states across the country.

Our politics are trapped in a vicious cycle: Political institutions don’t deliver effective governance, leaving voters feeling unheard and disempowered. Over time, people become increasingly disinclined to participate in governance, from the local to the federal levels. Participating less in our collective decision-making diminishes opportunities to encounter fellow Americans with different backgrounds and perspectives. Our civic culture and civil society fragment and tribalize. Groups develop an active dislike of one another.

With 2020 turnout likely to set records, this energy and engagement need to be harnessed to flip a switch on our democracy — to convert our universe’s negative equilibrium to a positive one. We should aspire to a virtuous cycle in which responsive, empowering political institutions are worthy of engagement; where engaged Americans learn more about one another, partner with one another, and rebuild the norms and guardrails that sustain democracies. These include a willingness to forge compromises and to let the losing side play a substantive role in post-election deliberations — even as they don’t lead.

How do we flip that switch? This is where the state ballot measures come in. As colleagues and I argued in a recent report, “Our Common Purpose,” our society needs reforms that empower voters, deliver equal voice and representation, and create responsive political institutions. We need to invest in civil society organizations that can help bridge divides and in a civic media ecosystem that can fill news deserts and address disinformation. We must actively rebuild a civic culture of mutual commitment to one another and to our constitutional democracy.

Five reforms that advance these goals are on the ballot around the country.

In Alaska and Massachusetts, voters have a chance to adopt ranked-choice voting. In Alaska, voters can embrace ranked-choice voting in general elections combined with nonpartisan, open top-four primaries for state executive and legislative offices and for federal offices. In Massachusetts, voters will consider ranked-choice voting in both primaries and general elections for state and federal offices other than the presidency. Allowing voters to rank their first, second and third choices, and so on, ensures that no one takes office without having a majority of voters behind them. This encourages a greater diversity of candidates to seek office. It reduces the negativity of campaigning, since candidates need to build broad coalitions, not drive wedges to get their limited plurality portion of the electorate to turn out... 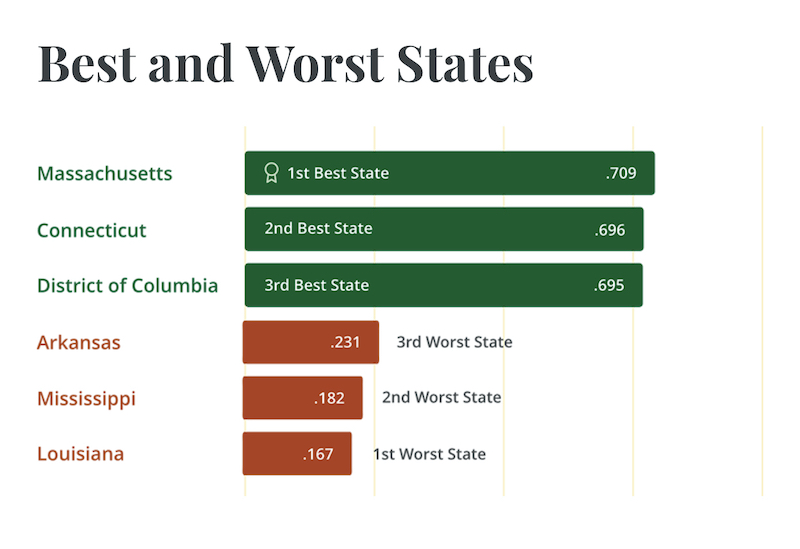 The Georgetown Institute for Women, Peace and Security issued a very informative report on the best and worst states to be a woman in the U.S. that tracks a number of factors that impact women's well-being:
This first-ever examination of women’s status along the dimensions of inclusion, justice, and security across the 50 states and the District of Columbia reveals vast disparities across place and race. It highlights that much work needs to be done at the federal and state levels to achieve gender equality across the nation. Gender inequalities are compounded by racial and class injustice.
What is the United States Women, Peace, and Security Index? The US WPS Index captures key aspects of women’s status at home, in the community, and in the economy and society. The index is structured around three basic dimensions: inclusion (economic, social, political); justice (formal laws and informal discrimination); and security (at the individual and community levels; figure 1). The index and its 12 indicators, grouped into these three dimensions, provide a standardized, quantitative, and transparent measure for ranking all states.
What does the index show? Our new and comprehensive measure of women’s well-being, rights, and opportunities in the United States reveals vast differences across the 50 states and the District of Columbia. There is an enormous range in performance, from Massachusetts at the top (.709) to Louisiana at the bottom (.167), on a 0–1 scale. A full ranking of all states and the District of Columbia is shown in figure 2.

Terrific ally and longtime democracy reform partner Steve Hill sent this very encouraging update on the new rules regarding mandates for women's representation on publicly-owned companies in California - another great example of the power that executives and gatekeepers have to advance women's representation and leadership through intentional actions and strategies that focus on changing systems:

Women have claimed 669 seats on the boards of California’s publicly-held companies since 2018, the year then-Gov. Jerry Brown signed a law mandating women in corporate boardrooms, according to a Tuesday report from the California Partners Project. The nonprofit cofounded by First Partner Jennifer Siebel Newsom commissioned the report, which also found that the number of all-male corporate boards fell from 29% to 2.3%.

Last month, Siebel Newsom’s husband signed a law mandating corporate boards have at least one member from an underrepresented community. 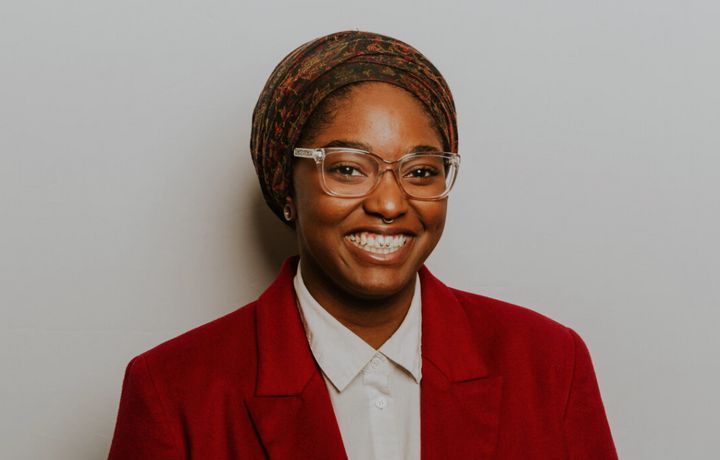 Sarah Ruiz-Grossman wrote an interesting piece on HuffPost about Mauree Turner who is running for office in Oklahoma who, if elected, would become the state's first Muslim lawmaker:

But in less than three weeks, she could become the state’s first Muslim lawmaker.

In a heavily Republican state, Turner’s district, which includes Oklahoma City, leans solidly Democratic — giving her a good shot at the seat.

“Oklahomans have representation that doesn’t have our shared lived experience — that hasn’t been in a family that had to live off SNAP benefits, [or] a single-parent household because one parent was incarcerated,” said Turner, a yearslong community organizer. “That was my upbringing, and it’s not a unique one.” 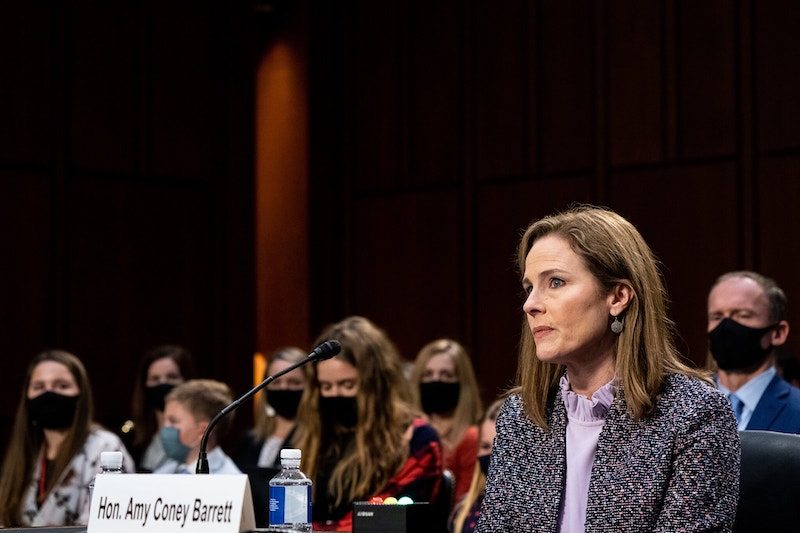 Amy Coney Barrett at the U.S. Senate hearings this week

A number of you suggested I include this story from The New York Times written by Claire Cain Miller and Alisha Haridasani Gupta on the conversation around motherhood during Amy Coney Barrett's confirmation hearing and the 2020 campaign:

During Judge Amy Coney Barrett’s Supreme Court confirmation hearings this week, Republican senators, one after another, marveled at a role that doesn’t appear on her résumé: mother of seven. They described her mothering as “tireless” and “remarkable,” clear evidence that she was a “superstar.” Senator Josh Hawley asked her for parenting advice.

Judge Barrett has embraced the image. News cameras were there to watch her load her large family into her car before her official nomination. “While I am a judge, I’m better known back home as a room parent, car-pool driver and birthday party planner,” she said the day she was nominated.

One of her sharpest questioners, Senator Kamala Harris, the Democratic vice-presidential nominee, has, in other settings, repeatedly emphasized her role as stepmother, which she took on when she married six years ago. She’s called Momala, she has told voters, and she cooks the Sunday night family dinners.

For American women in public office, being a mother has become a powerful but tricky credential. A woman who is professionally successful and ambitious is often seen as threatening or off-putting, researchers have found in multiple surveys of voters, but being a mother tempers that. It makes women seem warm and relatable — and suggests they can relate to voters’ lives, too.

Yet Americans are also ambivalent about mothers who work, forcing women to negotiate an obstacle course of perceptions and expectations.

Little of this is required of men. Compare, for example, the confirmation hearings in 1986 of Justice Antonin Scalia, a mentor of Judge Barrett. Senators welcomed his children to the hearings and offered them breaks, but spent little, if any, time connecting his fatherhood to his professional life. Justice Brett Kavanaugh spoke of coaching his daughters’ basketball teams, but there was little focus on his family life as a qualification.

“It’s that tightrope that women have to walk that men don’t,” said Christine Matthews, a Republican pollster at Bellwether Research and Consulting, who focuses on female voters and has been critical of President Trump. “If you’re a mom of young kids, how are you managing that? If you’re a career woman with no kids, do you just not understand my life? You have to address that before you can move on.” 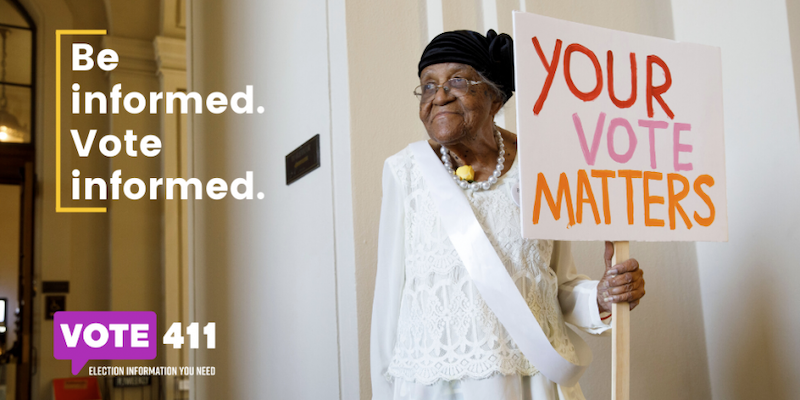 Terrific ally Kathy Chiron, president of the League of Women Voters for the District of Columbia, sent along this important reminder to VOTE! And check out this link to the Art Watch DC campaign Vote Your Life Depends On It that is selling great shirts to raise money to support the LWV and Rock the Vote. Many thanks to Shelley Lowenstein for her work on this project. 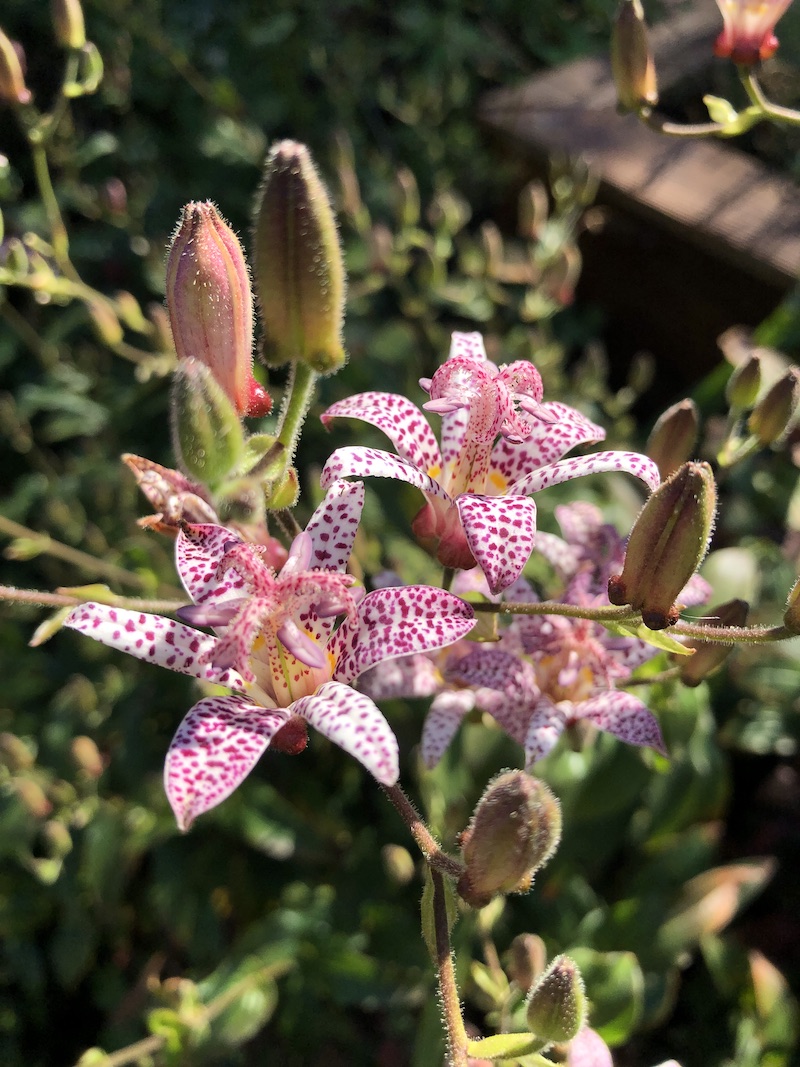 I have harvested the last of the tomatoes

, green beans, & squash but anemones, toad lilies, marigolds, zinnias, rose, and lavender are all still in bloom.
That's all for this week.
Warmly,
Cynthia
P.S. I was on R Street's Why Public Service podcast - listen in if that's of interest, consult this list from Mashable for top feminist podcasts, and check out this week's suggested reading from the team at RepresentWomen that offer various perspectives on international women's representation: 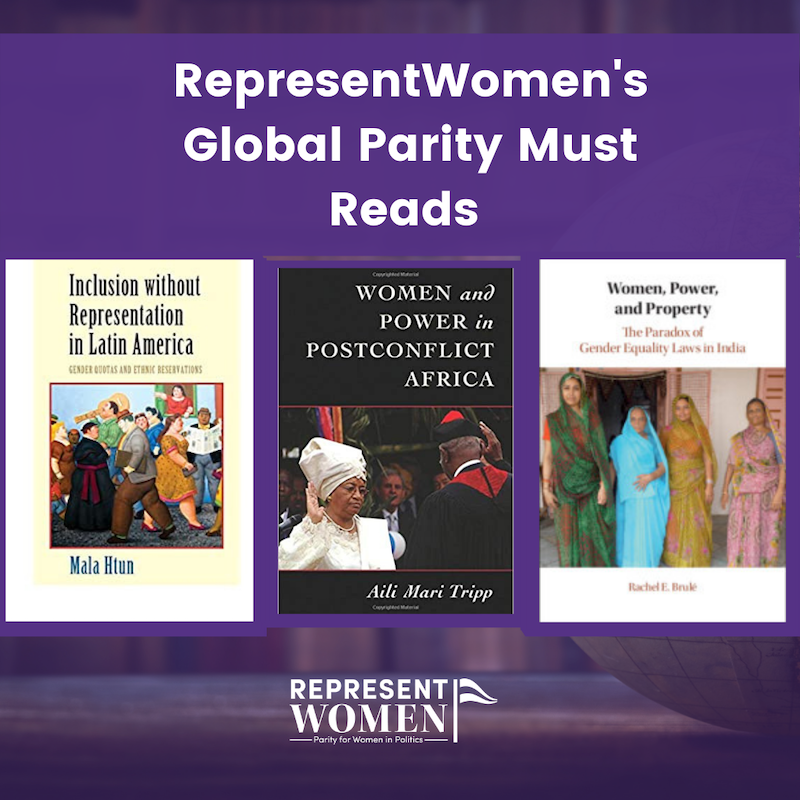