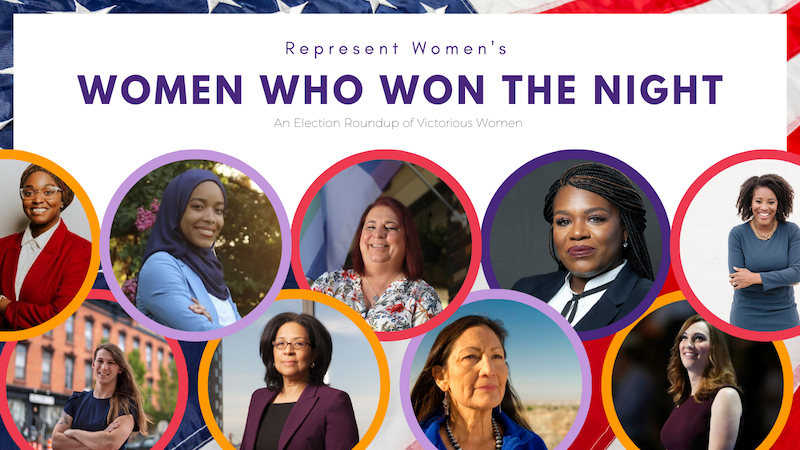 Top row (Left to Right): Mauree Turner, Madinah Wilson-Anton, Stephanie Byers, Cori Bush, Christina Henderson
Bottom row (Left to Right): Taylor Small, Marilyn Strickland, Deb Haaland, Sarah McBride
Dear allies in the work for women's representation & equality,
Election results are still coming in but we know that record numbers of women won at the local, state, and Congressional level this week. Some highlights include increased numbers of women of color & Republican women who have been elected to Congress, wins for ranked choice voting reform allies at all levels, gender parity on the Washington, DC city council, and wins at the local level for allies like Natalia Macker who won re-election to the Teton County Commission.
RepresentWomen's research fellow & champion writer Maura Reilly has compiled a list of key wins for women:

While many 2020 races remain undecided, including the presidential race, many women made herstory this week up and down the ballot. These victories include 87 women elected to statewide executive positions including 15 women of color, and at least 133 women serving in the 117th Congress with at least 43 women of color & record numbers of Republican women.

State Legislatures: several women made history at the state level this year including:

The 117th Congress: will include at least 132 women, with at least 107 women in the House of Representatives and 25 women in the Senate. Some of the women making herstory this year include:
Local progress toward parity - a couple city and tribal councils achieved gender parity this week, including:

Uncalled Congressional Races: of the 36 uncalled House races, 21 feature at least one woman and three have the potential to make history for women’s firsts, including:

Despite record numbers of women running for Congress, however, women will make up just 26% or 27% of members of the U.S. House of Representatives because we have a winner take all voting system that limits competition and protects incumbents. While it's exciting to celebrate candidates firsts and additional women elected to Congress, this election should serve as a clear reminder that we must invest in systems strategies that create more opportunities for women to win such as the Fair Representation Act & expanding the size of the House. After all the votes are in we will know exactly where the United States ranks internationally but it looks like gains for women in the House of Representatives will put the U.S. either right above or right below Afghanistan.


At the risk of saying this too often, countries that have adopted fairer voting systems have elected more women to office. A shining example of this reality is New Zealand which moved from our antiquated winner take all voting system to a mixed member proportional representation system in 1993 and now ranks 20th globally for women's representation with women making up 41% of parliament. Jacinda Ardern, elected to a second term as prime minister of New Zealand, has just appointed a diverse cabinet that includes Maori women in prominent leadership positions including the new foreign minister, Nanaia Mahuta, according to this story in The Washington Post:
New Zealand Prime Minister Jacinda Ardern announced a new cabinet Monday, describing her ministers as an “incredibly diverse” group who are highly qualified for their positions and reflective of “the New Zealand that elected them.”

“I think as a country we should be proud of this,” said Ardern, 40, who has been widely praised for her handling of the coronavirus pandemic. The island, home to about 5 million people, went into a strict lockdown early on in the pandemic and has thus far recorded only 25 deaths. Ardern won reelection in a landslide last month, with her Labour Party taking the majority in Parliament.

Her cabinet, set to be sworn in Friday, will focus on helping the nation recover from the coronavirus pandemic. It is made up of 20 people, five of whom are Maori, the Indigenous people of New Zealand who make up more than 16 percent of the nation’s population. Eight cabinet members are women.

They include Nanaia Mahuta, who will serve as foreign minister, becoming the first woman to do so in New Zealand’s history. She was first elected to Parliament in 1996 and has also served as minister for Maori development and local government. In her new role, she will replace Winston Peters, who lost his reelection bid this year.

“She is someone who builds fantastic relationships very, very quickly, and that is one of the key jobs in a foreign affairs role,” Ardern said Monday. “You only need to look at the difficult work that she has had to conduct over, for instance, her local government portfolio, and that to me demonstrates those diplomacy skills that we need to represent New Zealand on the world stage.”

Mahuta has already made history in New Zealand’s Parliament. Four years ago, she began wearing moko kauae, a traditional Maori chin tattoo, becoming the first woman to do so while serving as a lawmaker.

Women leaders of Nordic countries
There was a good piece in Borgen Magazine about the systems strategies that are being employed in Nordic countries to advance women's representation across sectors:
For the past couple of years, Nordic countries have made phenomenal progress in elevating the status of women to ensure gender equality is achieved. In fact, all five Nordic countries—Norway, Sweden, Iceland, Finland and Denmark—hold the top spots in the World Economic Forum’s 2020 Global Gender Gap Report for gender equality. This is largely due to women’s significant political representation and specific policies implemented that promote gender inclusivity.

Currently, most of the Nordic countries possess female leaders or prime ministers that are successfully leading their economy, especially in its recovery from COVID-19. Additionally, at least 40% of Parliaments have female leaders. In particular, 46% of Sweden’s Parliament and half of the seats in its government’s cabinet are held by women. Similarly, in Finland, more than 47% of the parliamentarians are women and currently has the world’s youngest female prime minister, Sanna Marin. Also, to ensure that women are politically represented in the government, these countries—specifically Sweden—enact quotas that motivate and prepare women for these powerful political positions.

Encouraging women to pursue political positions is crucial in narrowing the gender gap. When more women are in positions of power, they are more likely to implement legislation and policies that promote gender inclusivity. For example, the Gini coefficient metric system used to measure income inequality (where 1 is complete inequality and 0 is complete equality) calculated an average of 0.25 in Nordic countries. However, in countries such as the United States and the United Kingdom, income inequality is measured as above 0.30. This is because in Nordic countries female leaders encourage women to occupy jobs. In fact, an analysis made by the Organization for Economic Cooperation and Development estimated that more than 75% of women across all five Nordic countries have jobs.

Many women occupy jobs in countries such as Finland and Norway because there are implemented policies that benefit women in the workforce. For example, in Finland, a law was passed where both parents are guaranteed paid parental leave for at least 14 months. With the additional paternal leave, mothers are less obliged to stay at home and are given more opportunities to obtain jobs. This incentives fathers to provide for childcare, meanwhile allowing mothers to explore jobs and career paths in the given time. Studies have shown that with this policy, countries like Sweden can see a 7% increase in the mother’s annual salary with each additional month of paternal leave taken.

Following the principle of equal pay, Iceland implemented an effective law ensuring companies prove that they provide equal pay among its employees every three years. What is especially unique about this policy is it leaves the responsibility up to the company rather than the employee, which has been proven to be ineffective in the past. Even holding the number one spot on the Economic World Forum for gender equality, Iceland still took accountability for its 16% pay gap among its employees. By ensuring that more than 25 companies abide by this recent legislation, Iceland—along with the other Nordic countries—significantly narrowed the gender gap in impendent situations, such as wage disparity.

If many other countries, such as the United States, follow Nordic countries’ examples in minimizing the gender gap, they would be able to reap the many benefits from gender equality. For example, if the United States closed its gender gap, it will be able to receive an additional $1.2 trillion into the economy. By enacting policies and providing job opportunities that promote gender inclusivity, many nations will be able to further narrow their gender gap in the future.

Ranked choice voting was used for the first time in a state - in Maine - to tally presidential votes and was used in the U.S. Senate race there as well along with a handful of first-time uses in local elections around the country. The ranked choice voting team in Massachusetts ran an incredible campaign but last minute attacks from the Republican governor and a negative editorial in the Wall Street Journal contributed to a loss. Ballots are still being counted in Alaska so we don't yet know the outcome of the measure for ranked choice voting but we do know that ranked choice voting was adopted in all five cities where it was on the ballot. There was a good write up of ballot measures in Ms Magazine by Oliver Haug:

Alaska also voted on a similar initiative—Measure 2—proposing the adoption of an RCV system for certain races. However, final results for that race will likely not be known till next week (though with around 80 percent of precincts reporting at the time of this article, results are currently leaning against the measure, by a margin of 57 percent).

While a similar RCV measure made it to the ballot in North Dakota, it was removed from the ballot by the state Supreme Court prior to the election in August.

However, voters came out in support of RCV in all of the cities where it was on the ballot: Albany, California; Bloomington, Minnesota; Boulder, Colo.
Eureka, Calif.
Minnetonka, Minn.

“I think the loss in Massachusetts and the tight race in Alaska are a reminder that working with legislators to pass RCV through the legislative process may be an effective, and certainly the most affordable, way to advance reform,” said Cynthia Richie Terrell of RepresentWomen. “It’s important to have conversations about reform with existing lawmakers to build investment in the reform and protect it from the inevitable attacks.”

RCV as a voting reform benefits women and BIPOC candidates by eliminating vote-splitting and incentivizing positive campaigning, among other benefits.

Electoral College explainer graphics designed by the RepresentWomen outreach intern team
The United States is the only country in the world with the Electoral College system - Jesse Wegman, our friend at The New York Times has a good explainer video  and book on this topic. Colorado voted this week to join the National Popular Vote interstate compact. As a reminder, Hilary Clinton won the popular vote by 3 million or so votes in 2016 and Joe Biden is on track to win by an even larger number in 2020. 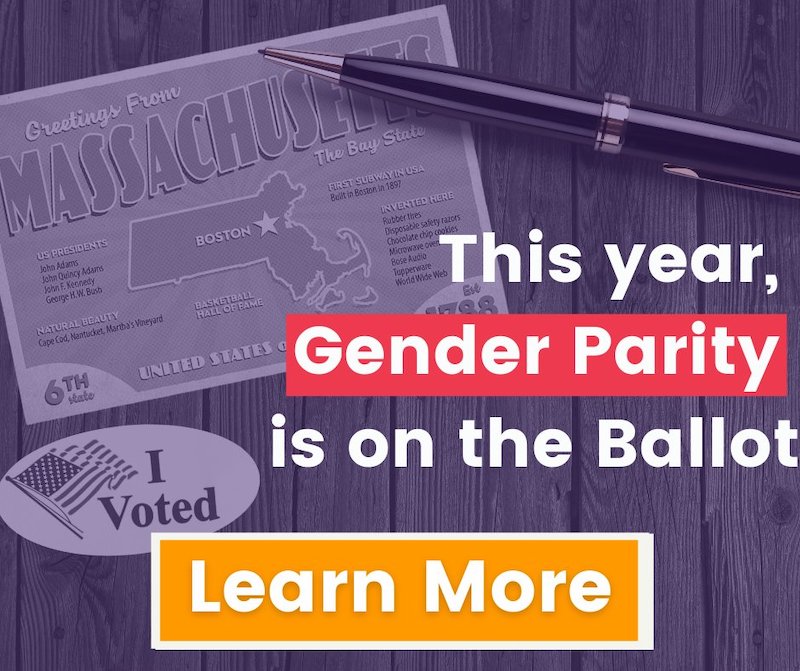 Gender was indeed on the ballot this week and there is a lot to celebrate but the results also confirm that there are serious deficiencies in our electoral system - from the Electoral College to winner take all voting to the inevitable partisan swings in midterm elections that will impeded serious & sustained progress toward gender parity and to that elusive more perfect union.

I am writing this blog from my hometown of Hamilton, NY where I am spending a few days to attend the memorial service for my dear friend Betsy Pownall's mother, Gertrude Pownall, who, in 1961, became the first female instructor to teach at the then all-male Colgate University. Gert was an incredible person in many respects but I will remember especially her injunction to meet people where they are and to love generously, those are words I aspire to live by.
Warmly,
Cynthia
P.S. Check out this week's suggested reading that includes books by Katherine Gehl, Martha Burk, and Elizabeth Rusch. 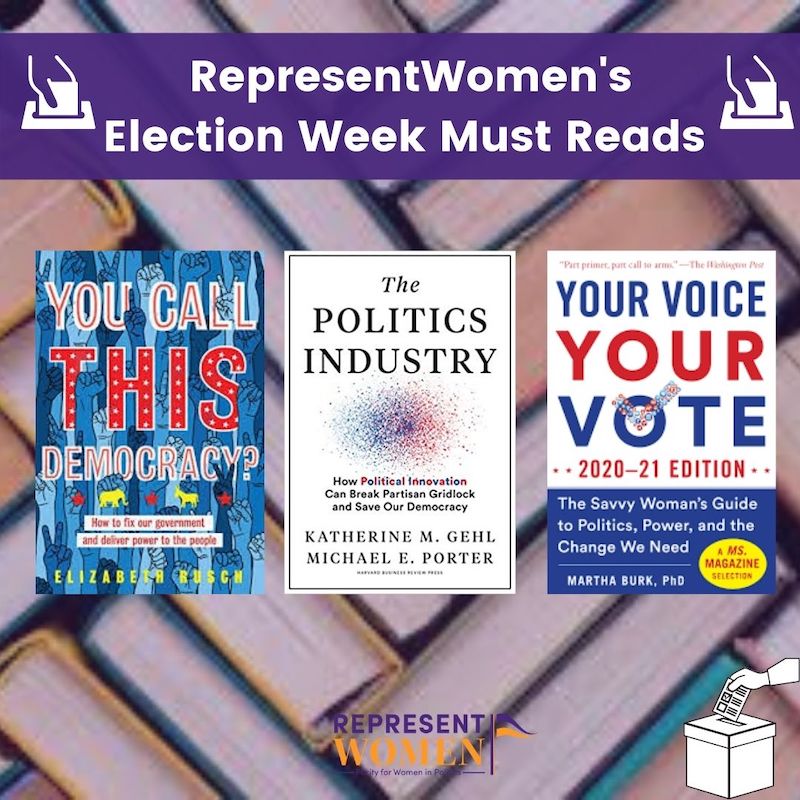