I am writing to you on a Thursday again because we are dashing off to our beloved cabin in the Pine Barrens tonight to spend 36 hours with all three of our children after my husband testifies to the NYC Charter Commission about the merits of Ranked Choice Voting which most New Yorkers call Instant Runoff Voting (IRV). Implementing IRV in NYC will save taxpayers millions of dollars by eliminating costly/low participation runoff elections. IRV/RCV will also help to increase turnout & civility, and fuel the election of women & people of color.
If you are a New Yorker please visit the new FairVoteNY website to learn how to contact your council member and the mayor and ask them to support Instant Runoff Voting! It'd be great if you would also sign the petition and follow FairVoteNY on Facebook, on Twitter, & on Instagram! Katie Pruitt has been researching and writing about women in judicial positions for our Balanced Bench project & tracking outcomes for female candidates in recent international elections: Izzy Allum researched indigenous women's representation in North America and wrote this blog about what she found:
With the 2018 midterm elections quickly approaching, American politics are once again in the spotlight. However, one area of American politics that has long being left in the shadows is the sovereign Native-American governments housed within our country. Native-American tribes, or “nations,” have separate, federally recognized governments, and they have the right to pass their own laws and run their own courts. For decades, the political representation of women and how to increase it has been extensively studied and discussed, but little research has been done on the representation of women in Native-American tribal governments. In an attempt to begin filling in this missing data, RepresentWomen has begun looking into the legislative and judicial branches of thirteen tribal governments.

Evelien Van Gelderen has been working on the PACs as Gatekeepers project with Jamie and building RepresentWomen's digital library. This week she and Barbara interviewed Oakland mayor Libby Schaaf :
The RepresentWomen interns spoke with Mayor of Oakland Libby Schaaf on Tuesday. Elizabeth “Libby” Schaaf was elected the Mayor of Oakland, California in 2014 in a ranked choice voting election. Schaaf was born and raised in Oakland and has long been involved in volunteerism in her community. She co-founded Oakland Cares, a non-profit dedicated to organizing volunteer and community projects. A Loyola Law School graduate, Schaaf worked as a legislative aid for former mayor Jerry Brown and served on the Oakland City Council. As mayor, Schaaf has focused on improving education, reducing homelessness, and improving community safety. In 2016, she launched the Oakland Promise, an education initiative aiming to triple the number of college graduates from Oakland by 2025.

In our interview, Mayor Schaaf spoke about her career path, emphasizing her lifelong passion for volunteerism and serving her community. She also spoke about how ranked choice voting made campaigning more civil and encouraged her and the other candidates to appeal to all voters, instead of focusing on a narrow group of voters. Mayor Schaaf shared her advice for women interested in pursuing a career in politics, highlighting the need to build strong relationships with people, be kind, and stay firm and true to one’s core beliefs and passions. She ended on an inspiring note, expressing her belief that when those who have “non-dominant identities” are able to enter the halls of power, everyone benefits. Kendrik Icenhour has been analyzing a 100 page document prepared by our pro-bono partners at Hogan Lovells that tracks gender quotas in use in every state in the US - stay tuned for more on the State Party Rules project.

How does this all fit together you may be wondering? I believe that in order to accelerate the rate at which women are winning elections we need to better understand gatekeepers like political parties & PACs, we need to know who is in office now and how they got there, and we need to learn more about strategies that are advancing women's representation in the US & around the world.
If you haven't done so already please consider registering for the Seneca Falls Revisited Conference & Retreat in Rochester, NY on Women's Equality Weekend - August 24th - 26th - it's going to be a terrific event!
Thanks for all you are doing,
Cynthia
P.S. RepresentWomen is planning an event this fall at the fabulous Succotash Restaurant! Please join us on October 11th if you can & look for a proper invitation in the coming weeks! 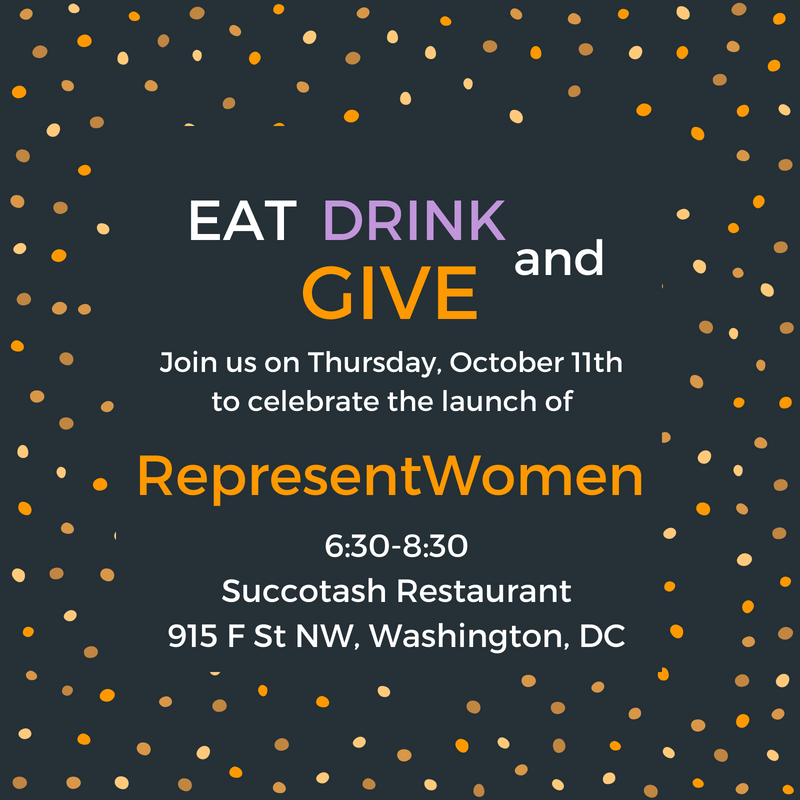