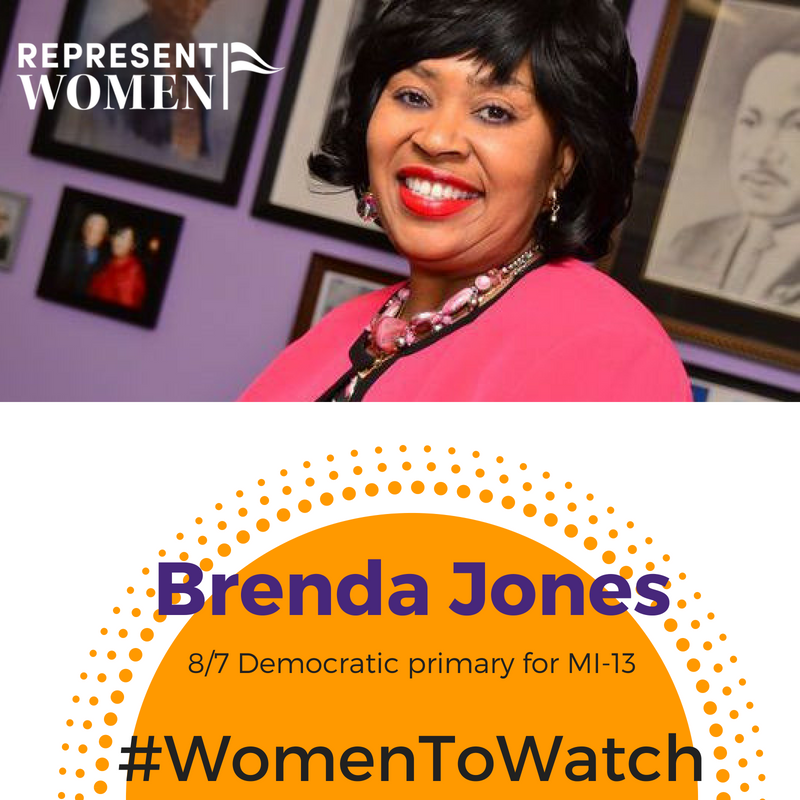 Primary season resumes in early August, when voters in Tennessee, Michigan, Kansas, Missouri, and Washington will pick their candidates for the 2018 midterm elections.

There are dozens of accomplished and passionate women running in these five states’ primaries, and it was difficult to choose just one woman to spotlight this week as part of #WomenToWatch. Brenda Jones, House candidate for Michigan’s 13th district, stands out because of her 13 years of service and leadership on Detroit’s City Council. Currently, Jones is serving her second term as the council’s president. She describes her Congressional platform as “JONES: Jobs, Opportunities, Neighborhoods, Education, and Safety”, and says these have been her priorities since her first term on the city council.

RepresentWomen is researching trends of women’s representation in U.S. cities, and preliminary analysis indicates that women may be more likely to hold at-large council seats than single-member district seats. Detroit is one of many U.S. cities that elects both at-large and district council members. Both of Detroit’s at-large council members are women. Of the seven members elected from single-member districts, though, just two are women. RepresentWomen finds that city councils made up entirely of at-large members have about 22 percent more women than councils made up entirely of district members; city councils like Detroit’s with both kinds of seats have about 11 percent more women.

Jones was selected as City Council President by her fellow council members using several rounds of ranked choice voting (RCV), a system that allows voters to select and rank multiple candidates for a position to ensure that the eventual winner has a majority of support. Jones’ election as city council president may well be partially attributable to RCV: RepresentWomen’s research on RCV shows that the voting system elects more women than typical single-choice elections, clearly demonstrating that rules matter for parity.

Whoever wins the Democratic primary for the 13th district is likely to win the seat in November, given the district’s 32-point Democratic lean and its majority-minority demographics.

Another unexpected perk should Jones be elected? She’d join fellow Michigan Democrat Brenda Lawrence in Congress, and both of Detroit’s majority-Black congressional districts would be represented by Black women named Brenda.