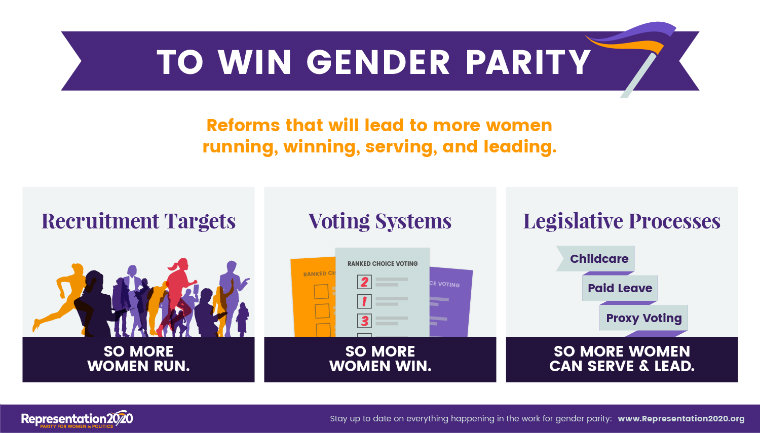 The nation may wake up tomorrow to its first woman president and a record number of women Senators, but down ballot, the news is not good for women in elected office. At least 44 governors will be men next year, and the U.S rank among all nations for the representation of women has declined from 44th in 1995 to 96th in 2016. To win gender parity, intentional action and structural changes are necessary at every level of government.

Today’s election results are unlikely to improve our international ranking significantly. FairVote’s Monopoly Politics — which has near-perfect accuracy in forecasting congressional winners — projects that incumbents are favored to win in most of the congressional races nationwide. While women may pick up a few seats in the House and as many as three additional women in the Senate, the pace of change in the United States is much slower than in other countries.

The number of elected women serving in the House of Representatives has increased just 9% in the last 25 years while women’s representation in the Senate has increased by 13 percent. Women’s representation in state legislatures has grown by only 4% over that same time period and the representation of women as mayors and on city councils is under 20%. Women hold more than a third of the legislature in only four states, and are not more than 42% in a single state. If history is an indicator, the number of women elected to state legislatures is more likely to drop than to increase.

A deeper look reveals stark differences in the rate at which different political parties and regions of the country elect women. Republican women make up only 9% of Republicans in the House, 11% of Republicans in the Senate, and 10% of all state legislative seats. In contrast, women comprise 33% of the Democratic delegation in the House, 32% of the Democrats in the Senate, and 15% of state legislators.

The average share of all women in state legislatures in Plains and southern states is far below other regions of the country. Southern states score the lowest on Representation2020’s Gender Parity Index which tracks progress toward parity by adding up the number of women elected at the local, state legislative, statewide, and federal level. Georgia is third from last with a score of 8.6, while Louisiana is 2nd to last with a score of 8, and Mississippi ranks lowest in the nation with a score of 6. A gender parity score of 50 means that there are an equal number of men and women in elected positions in government. The top states for gender parity are the two most northern states: New Hampshire tops the list with a Gender Parity Score of 49.99 and Washington comes in second with a score of 46. However,

It’s not just republican women and southern women who are underrepresented at all levels of government. The voices of women of color and younger women are not being heard in the corridors of power either. To reach real gender parity women from across the political, geographic, racial, and age spectrum must be represented fairly in our governing bodies.

First, we need better recruitment. We must challenge the institutions that influence who runs for office — like PACs, donors, and political parties — to set targets for the number of women candidates they recruit and support. These voluntary targets mimic the quotas that are used in over 100 nations to fuel the election of women candidates and are similar to the widely accepted gender balance that comes from rules in other fields like entertainment and athletics.

Second, we need fair voting systems that give people the power to choose their representation. Multi-winner districts (where more than one member represents a community) have a history of electing more women. Ranked choice voting allows voters to rank candidates in order of choice and support the candidates they like the best without fear their vote will help the candidate they like the least. Fair representation voting combines multi-winner districts with ranked choice voting to create openings for women, people of color, and all parties in areas that are now one-party strongholds. It is in use today across the country and can be used at the local, state, and federal level without amending the U.S. Constitution.

Third, we need to promote better legislative practices for collaborative policy making. Better internal legislative practices can help women — and men — juggle the demands of family and their elected office. Tailored to the specific of the level of office, changes include better on-site child care, paid leave, virtual or proxy voting, and leadership selection processes based on both merit and intentional actions to elevate women to leadership positions.

We have strong precedents for such changes. Title IX leveled the playing field for girls and women in education & athletics while the Voting Rights Act addressed systems that disadvantaged people of color. Republicans led the way nearly 100 years ago to enact gender quotas for their state and national party committees as well as convention delegates from many states, with the Democrats following suit. The common thread is that we addressed inequality by changing the rules and laws — not by expecting individuals to change.

The United States can make progress toward gender parity but only if we adopt these innovative strategies that challenge the status quo and bring new talented voices to the table.