Getty Images: 116th Congress
Dear women's representation enthusiasts,
There were several key primaries this week with fascinating wins and losses for women candidates along with a number of landmark Supreme Court decisions that will dominate the headlines for weeks to come. In the midst of all this news I was very glad to read the latest report from Sarah Bryner from the Center for Responsive Politics who writes about the likely composition of the 117th Congress. While there have been a number of stories about the number of women running, Sarah's report examines the prospects for these women to actually win. It's so important to remember that the power of incumbency, the challenges of raising money, and our antiquated electoral system fortify the status quo:

The group of candidates running for Congress in 2020 is the most diverse in recent memory.

However, early OpenSecrets analysis suggests that the 117th Congress will be only slightly more diverse than the 116th. Congress is already less diverse than the U.S. population, with 78 percent of members identifying as white, a much higher percentage than the 60 percent of white Americans. Women hold 24 percent of all congressional seats. Despite the relatively small number of women in Congress, especially women of color, and the underrepresentation of people of color as a whole, the 116th Congress is the most diverse in history.

First, incumbency reelection rates are high and since the current body of representatives is largely white and largely male, we would expect the following Congress to be the same. Second, when incumbents do retire, creating open seats, voters tend to select candidates who “look like” the member they are replacing. Finally, candidates of color — particularly women of color — face hurdles in fundraising... CTGN America
Catherine Wineinger wrote quite an interesting article for the London School of Economics & Political Science on the challenges conserative women face as candidates in the UK and the United States:

The most recent national elections in the United Kingdom and United States yielded record numbers of women legislators. Yet in both countries, those numbers were driven by the election of women on the Left. While women are now a majority of Labour MPs, fewer than a quarter of Conservative MPs are women. In the US Congress, women make up 37.7% of the Democratic Party and a mere 8.8% of the Republican Party.

The underrepresentation of women in right-wing parties is a global phenomenon. In our recently published article, Mary Nugent and I argue that comparing the experiences and strategies of Conservative and Republican women can help us to better understand this phenomenon. It also allows us to delve deeper into the structural and ideological differences between UK and US politics, and the gendered impact of those differences.

We analyzed how women in the Conservative and Republican parties have made the case for electing more female legislators. Our findings show that right-wing women work as strategic party actors, advocating for women’s increased representation tactically within the specific electoral, ideological, and institutional contexts of their party. Listen in to this terrific podcast on Engendered with Erin Vilardi, CEO of VoteRunLead, who talks in detail about her work to train women candidates to run and win at the local, state, and federal office:
On this episode of the en(gender)ed podcast, our guest is Erin Vilardi, the Founder and CEO of Vote Run Lead, the nation’s largest and most diverse training program for women to run for office and win. She first launched Vote Run Lead as Vice President of Program and Communications at The White House Project. We speak with Erin today about Vote Run Lead’s work to help train female candidates to run and win, some of the barriers they face along the way, and how society benefits when we have more women in elected office and positions of power. Marianne Schnall, founder of What Will it Take Movements, writes about her conversations with 12 women philanthropists in Forbes Magazine about the need for increased investment in change-making opportunities:

Over the past several years, we have seen women rising up in all kinds of powerful ways. In addition to the unprecedented surge of women running for office and organizing grassroots movements, women have also been exerting their influence through philanthropy, mobilizing their economic power and resources to create change by giving to myriad causes, campaigns and donor networks aligned with their values.

Women have become increasingly energized and resolute, and our commitment to giving has strengthened and continued. In the wake of the COVID-19 pandemic (and growing awareness about the many cracks and inequities that plague our society and institutions such as systemic racism), women’s philanthropy has become a powerful force responding to the many urgent needs on a local and national level, filling in the gaps of inadequate government funding and also addressing the often unrecognized specific needs of marginalized communities who have been disproportionately impacted by COVID-19, including women and Black and Indigenous people of color (BIPOC).

The fact is, we need philanthropy more than ever—not just to assist those who are most vulnerable as a result of the pandemic but also to proactively use gender-lens, intersectional giving as an engine to support a purposeful re-shaping and rebuilding of a more equitable and just world. Money is underutilized as an enormous potential force for good, and now is the time to use as many tools as we have to address the many serious problems we currently face. Suffragist Inez Milholland (right) was a key figure in the 1913 women’s suffrage parade on Washington, D.C., depicted in the new PBS documentary “The Vote.” An online preview on July 1 includes commentary by two Central Florida leaders, Linda Chapin and state Rep. Geraldine Thompson. (Library of Congress / Courtesy photo)
I am looking forward to watching The Vote which is airing next Monday & Tuesday on PBS - this good piece by Joy Wallace Dickinson in the Orlando Sentinel provides a glimpse into the movement for suffrage:

One of the turning points of the movement took place in 1913, the day before President Woodrow Wilson’s inauguration (until 1933, inaugurations after Andrew Jackson’s took place March 4).

On March 3, thousands of women marched down Pennsylvania Avenue in Washington, D.C., in what’s generally considered the first large, organized march on the capital city to make a political statement.

Organized by suffragists Alice Paul and Lucy Burns, the march aimed to express “a spirit of protest against the present political organization of society, from which women are excluded.”

Orlando Sentinel readers learned details a few days later, in a “Washington Letter” report on March 11. “Never before had Washington ever seen such a parade,” the article declared; “a valiant army of American women” had achieved their purpose of putting “their cause so closely before the government.”

That was the good news. The day was marred, the report went on, when the mostly male crowd “literally mobbed the marchers. ... The police in many instances stood idly by while rowdies mauled and insulted women.”

In spite of the troubles, the women had “seized the national stage ... and put their bodies on the line in what turned out to be a raucous scene,” historian Martha Jones writes on the website for “The Vote.”

The parade also revealed painful divisions in the movement. Paul and her collaborators had inherited the racism that too often ran through white suffrage associations, especially in the South, Jones notes. “When given her opportunity to remedy how white supremacy threatened to taint her parade, Paul faltered.”

Maura Reilly, research fellow at RepresentWomen, writes this week about the Seneca Falls Women's Rights Convention, held in upstate NY in July of 1848 where advocates gathered to discuss the best strategies to win the right to vote:

During the 1848 Seneca Falls Convention, the declaration was read by Elizabeth Cady Stanton protesting women’s inferior political and legal status in the United States and set out eleven resolutions calling for women’s economic, political and moral equality. The final resolution called for women’s right to suffrage and risked being excluded from the document until Frederick Douglass, an early advocate for universal suffrage, gave an impassioned speech in favor of the motion.

At the convention, 68 women and 32 men signed the Declaration backing the resolutions which served as the foundation for the women’s rights movement. It would be 72 years until the 19th Amendment granted women the right to vote and 116 years until the Voting Rights Act enforced the universal suffrage demanded by the Seneca Falls Convention and promised by the 19th Amendment.

By the time the 19th Amendment was ratified in August of 1920, Charlotte Pierce née Woodward, was the only living signatory of the Declaration of Sentiments. At the time of the Seneca Falls Convention, Pierce was 18 years old and travelled over 40 miles to the convention after reading about it in the paper. Charlotte was quoted as saying, “I do not believe there was any community anywhere in which the souls of some women were not beating their wings in rebellion.” Following the 1848 convention, Pierce continued to fight for women’s rights and suffrage and joined the American Woman’s Suffrage Association. Despite living until the ratification of the 19th Amendment, Charlotte Woodward Pierce was never able to exercise her hard earned right to vote, falling ill before election day. I have been thinking this week about the wives, mothers, and daughters of the men who signed the Declaration of Independence and I am happy to report that I found this list of the signers and their wives. I don't know very much about them beyond Abigail Adams and her much-heralded plea to "remember the ladies" but I can imagine them gathering in each other's homes to discuss the system of government for the new country. I suspect a number of them shared Abigail's concern for the welfare of women and might be shocked to learn how poorly women are represented in the United States...but I think they would be very glad to know we are all working hard to make sure that the gatekeepers do indeed remember the ladies. Here's to the women who worked for equality who came before us, those who will follow us, and to all of us working pell mell to advance women's representation and improve upon the systems set in motion by the "founders" centuries ago.
Cynthia
P.S. As always, check out our suggested reading for this week from Soledad O'Brien, Representative Pramila Jayapal, and Katherin Gehl 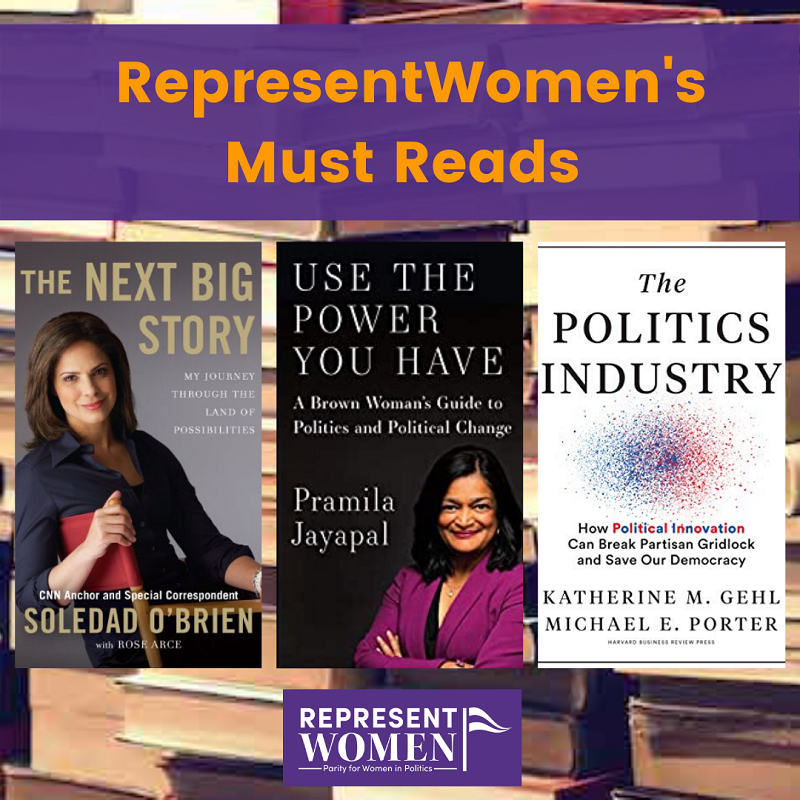