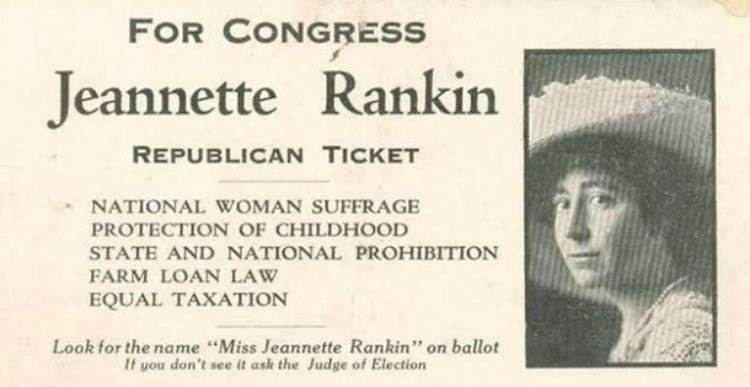 Most Americans don’t realize it, but yesterday, April 2 the US quietly celebrated the centennial of an event that is as auspicious as Martin Luther King’s birthday or July 4, Independence Day. On April 2, 1917, Jeannette Rankin from Montana was sworn in as the first woman ever elected to the U.S. Congress. Her election occurred three years before women won the right to vote. For advocates of greater political equality, Representative Rankin’s election was a giant step forward toward the revolution that became the 20th Amendment to the US Constitution.

And yet advocates of women’s representation say progress has been glacially slow since then. Cynthia Terrell, director of Representation 2020, which focuses on political equality, says “While women compose a majority of the nation’s population, progress towards political parity has been disappointing.”

With Hillary Clinton’s loss, the United States failed to join other nations around the world with a a democratically-elected female head of state, including Germany, United Kingdom, Chile, Poland, Lithuania, Norway, Bangladesh, Croatia, Namibia, Malta, Taiwan and more.

But even more disappointing to Terrell and other advocates is the slow progress in the US Congress and state legislatures. A century after Rankin’s swearing in, the overall number of women elected to Congress remains stuck at 19% in the House and 21% in the Senate

In the 2016 election, the number of women in the House actually declined, and the number of governors dropped to just five. Women’s share of over 7300 state legislative seats across the country is still under 25 percent. The United States now ranks 104th among nations for representation of women – sandwiched between Panama and Kyrgyzstan – a steep decline from 44th in 1995.

Heidi Hartmann, an economist who runs the Institute for Women’s Policy Research, says “We calculated this at some point, and at the same rate we’re going, it would take about 100 years to get an equal share of women in Congress.”

Why so little progress? There are several factors, say experts, including cultural attitudes and traditions. One reason also is incumbency. Michele Swers, a political scientist at Georgetown University, says “Congress has historically been all male, and members of Congress get reelected at rates above 90 percent. That means you’re basically waiting for people to retire.”

But Terrell points out that if you look at other nations, it reveals another crucial factor in women’s political success.

Take a country like Germany. It has fairly conservative social norms, with a traditional perception of motherhood. Yet Germany has nearly twice as many females elected to its national parliament as the US. How can we explain this stark difference?

Part of the explanation undoubtedly lies with Germany’s different political and electoral institutions. They are arguably better suited for today’s pluralistic societies.

For example, Germany has universal voter registration – every eligible citizen is automatically registered to vote. It also has public financing of campaigns, to ensure that non-wealthy candidates and political parties can reach voters with their message and create vigorous electoral competition. These two reforms undoubtedly bring more women into the process.

But Terrell points out that, most importantly, Germany also elects its legislatures with a method known in the US as “fair representation” voting (and known in Europe as “proportional representation”).

With that method, instead of using single-seat ‘winner-take-all’ districts in which the highest vote-getter wins and everyone else loses, multi-seat districts are used in which candidates and political parties are elected in proportion to their share of the popular vote. So in a 5 seat district, twenty percent of the vote wins one seat, 40 percent wins two seats, and so on.

Various studies by political scientists have demonstrated a high correlation between this method’s use and higher rates of representation for women. Sweden, with 44% of its national parliament members being female, has been a leader. That’s double the number of female members in the US Congress. Other global leaders include Finland (42%), Norway (40%), Spain and Argentina (39%), Denmark, Belgium and Netherlands (38%) and Germany (37%)

In the US, current remedial efforts put great emphasis on increasing individual women’s capabilities, ambition and skill set (such as enhancing their fund-raising abilities). “But that puts all the responsibility on women to change,” says Terrell, “As if they just need to try harder, rather than on where it belongs, which is on modernizing the rules and institutions that govern the electoral process.”

The US already has a long history of addressing inequality with structural solutions, instead of personal ones. Whether Title IX fighting sexual discrimination in education and athletics, the Americans with Disability Act, or the Voting Rights Act for fair racial representation, changing the rules has been the best way to advance equality.

The United States now ranks 104th among nations for representation of women – sandwiched between Panama and Kyrgyzstan – a steep decline from 44th in 1995.

Other advocates of political equality have called for voluntary recruitment targets for political parties, so that they nominate more female candidates. More than 100 nations use mandatory quotas for parties to enhance women’s chances of election.

And widely accepted gender-balance practices are deployed in other fields, such as entertainment and athletics. Nearly a century ago, the Republican Party led the way to enact gender quotas for their state and national party committees, as well as for convention delegates from many states, and the Democrats eventually followed suit. Leadership of parties and committees also should be based on both merit as well as intentional efforts to elevate women.

But does women’s representation really matter? Some defenders of the status quo have made the claim that the gender of our representatives is not important, that a man can represent the interests of a woman, and vice versa, and that we should aim to be a “gender-blind” society, just as we should aim to be a “race-blind” society. But various studies have shown that electing more women as officeholders has a significant impact on public policy.

Studies of both state legislatures and Congress have found that women and men typically make different choices about their legislative priorities. National studies of state legislators conducted by the Center for American Women and Politics (CAWP) found that women legislators were more likely than their male colleagues to list a women’s rights bill or a bill affecting children and families as a top priority.

In Patterns of Democracy, Professor Arend Lijphart, a nationally renowned political scientist and former president of the American Political Science Association, found strong correlations between the presence of more women legislators and more policy advancement on issues like the environment, macroeconomic management, comprehensive support for families and individuals, violence prevention, and alternatives to incarceration. Other studies have found that women legislators – both Republican and Democrat ― introduce a lot more bills than men in the areas of civil rights and liberties, education, health, labor and more.

Of particular relevance to a nation like the United States, which is so plagued by deep polarization and balkanization, research has shown that ethnically diverse and divided nations that elect women rather than men to key national leadership offices end up with better economic performance. Columbia professor Katherine Phillips and her co-researchers found that for the most ethnically diverse nations, having a woman in the top national leadership position was correlated with a 6.9 percent greater increase in GDP growth in comparison to nations with a male leader. The authors attribute that to women leaders having a more participatory, democratic style than men, and more confidence from voters at managing difficult situations that require more inclusionary or cooperative approaches.

So not only are female political leaders emphasizing vastly different policy priorities, but they also tend to bring to the table a different political style that abets the bridge-building process. During an impasse over the federal budget, former US Senator Susan Collins, a Republican from Maine, said, “I think if [women] were in charge of the Senate and of the administration that we would have a budget deal by now,” she told ABC News, surrounded by her fellow female senators. “What I find is, with all due deference to our male colleagues, that women’s styles tend to be more collaborative.” Indeed, one study from the National Bureau of Economic Research found that female Republican officeholders’ policy positions are closer to those of the median voter than their male GOP counterparts, and they are more likely to sponsor bills that attract bipartisan support.

Evidence of the beneficial impact of women’s presence in leadership appears beyond government as well – in the realm of private enterprise. Research has found that a company with more gender balance positively correlates with better economic performance. And a Deloitte report noted that changing the gender balance of product development teams yielded positive results in terms of business performance.

So whether it’s in the public or private sectors, the evidence strongly suggests that more female participation and leadership translates into better performance, more efficiency and more policy congruence. Yet despite the heroic efforts from organizations like Emily’s List and Feminist Majority, progress toward political equality is not only glacially slow in the US, but is actually falling behind its international competitors. That’s because the political institutions in the US are not suited for a modern society that values broad representation and greater equality. No matter how hard individual women or organizations try, they are being flooded by the tidal wave of failing political institutions and practices.

But there’s hope. Soon a bill will be introduced into the US House of Representatives, the Fair Representation Act, which if passed will elect members to the House by “fair representation” voting. Use of this method would not only elect more women, but also would elect a fair proportion of racial minorities without having to draw race-conscious districts, a remedy that has been made more difficult by the US Supreme Court. It also would likely open up opportunities for smaller parties to win some seats, creating a more robust multi-party democracy in the US and giving voters more political choices on election day.

Says Terrell, “We are three years away from the centennial of women winning the right to vote in 1920. Then it took 96 years more for the first woman presidential nominee from a major political party. At the current rate, we won’t see gender balance in legislative bodies for a very very long time.”

It’s time for the US to join the many other democracies around the world that have opened up their democracies to create broad representation. Founding father John Adams once said about the U.S. Congress, “This representative assembly should be in miniature an exact portrait of the people at large. It should think, feel, reason, and act like them.” American have been marching, protesting and in some cases literally dying trying to achieve that ideal. Sadly, the US is not that much further towards this goal than it was when powdered wigs were in fashion. New strategies are badly needed. Given the recent struggles of US democracy, the time is right for innovative solutions, like “fair representation” voting, as well as public financing of campaigns, universal voter registration and a national popular vote for president.

Steven Hill (www.Steven-Hill.com) is a senior fellow at FairVote and author of “10 Steps to Repair American Democracy”