This week RepresentWomen hosted an event with women leaders in New York including The New Majority NYC Executive Director Jessica Haller, Representative Chantel Jackson from NY's 79th district, former speaker of the NYC Council Melissa Mark-Viverito, and current NYC Councilwomen Amanda Farias & Althea Stevens. Speakers discussed the Why Women Won in 2021 RCV in NYC Report and how a twin-track approach helped dramatically increase women's representation! We will be posting the recording of the event to our YouTube channel soon! The articles for this week were found by our Outreach Associate Alissa Bombardier Shaw and Research Associate Steph Scaglia. 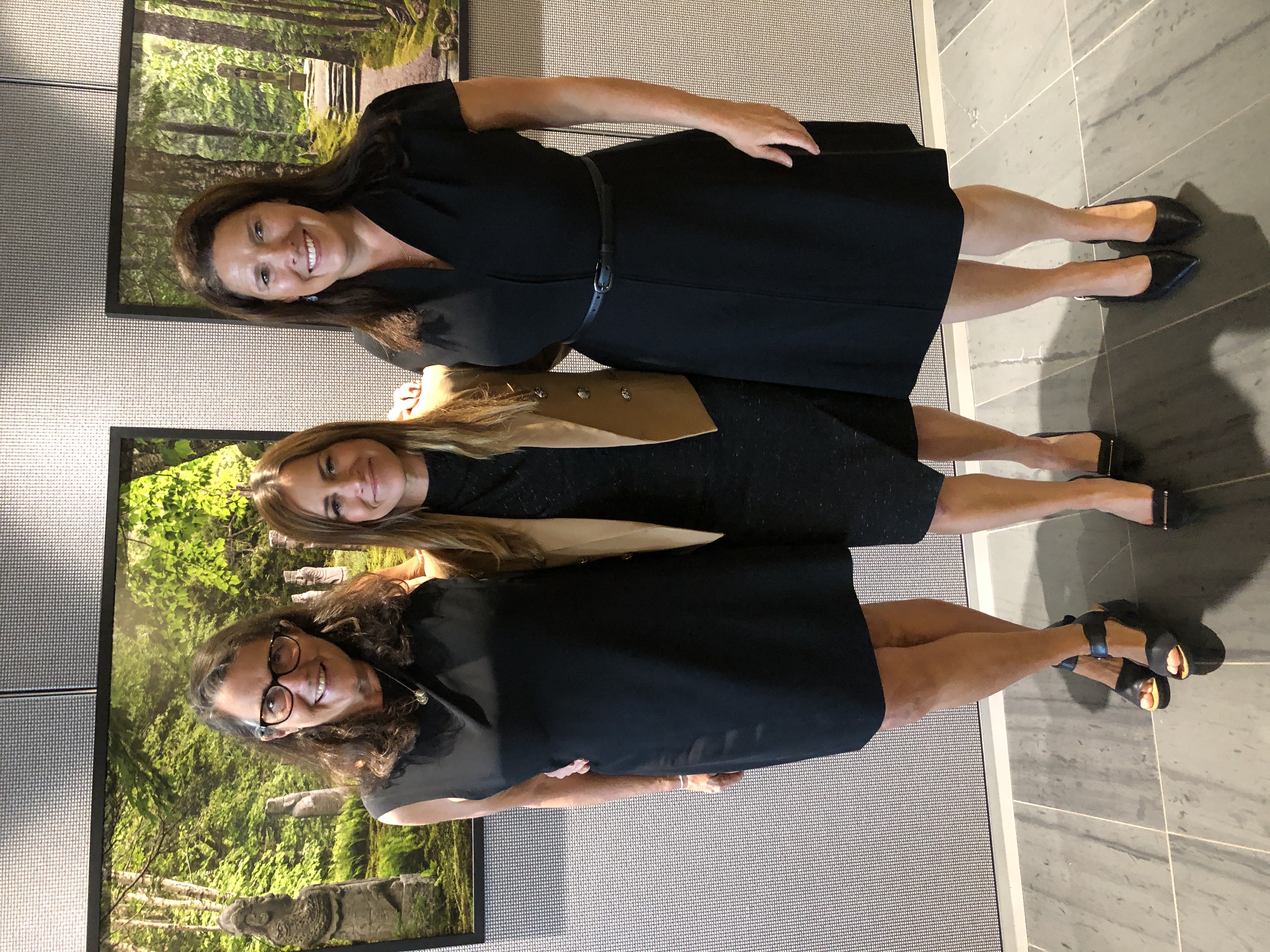 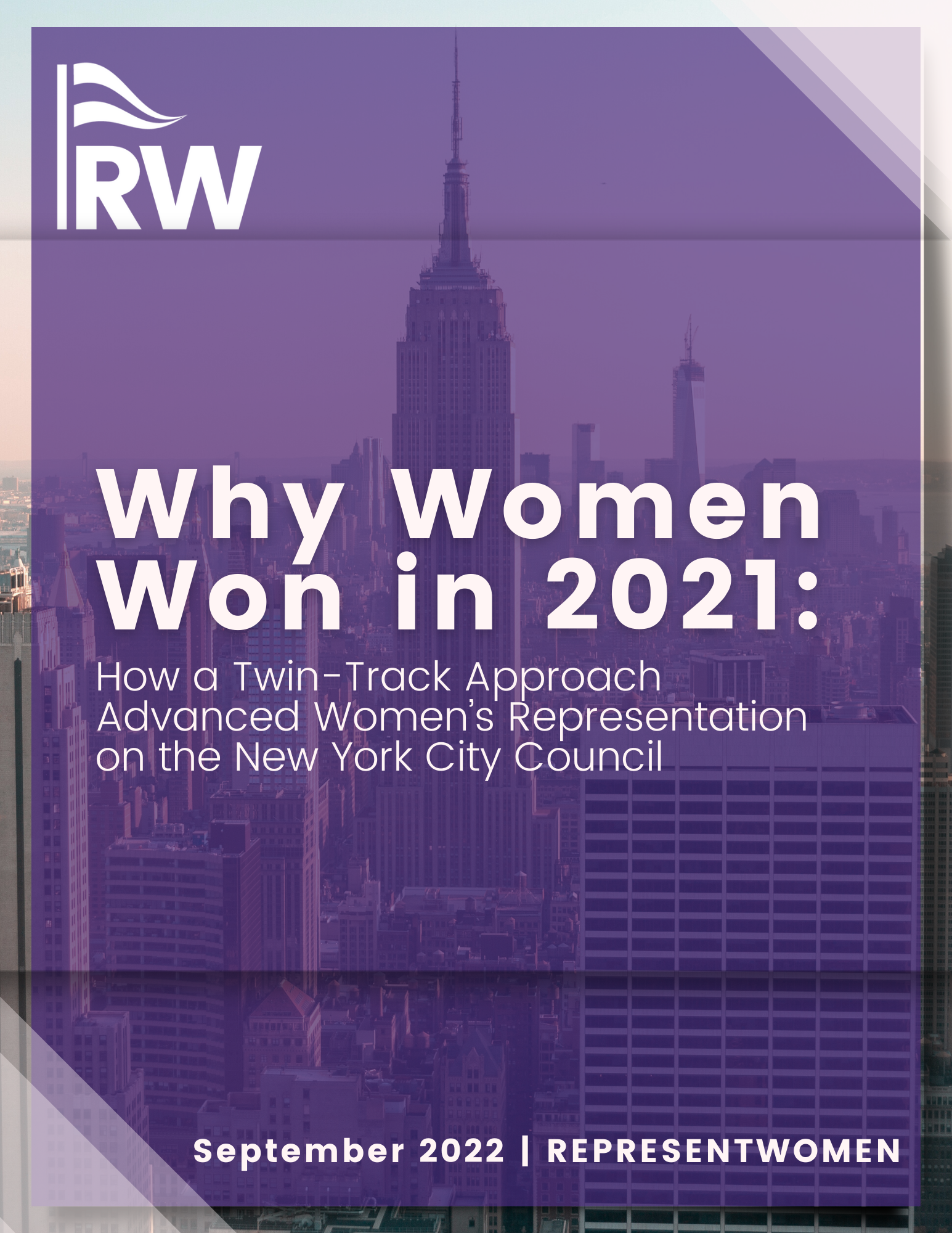 Following the historic win for women on the NYC council in 2021, The New Majority NYC teamed up with our RepresentWomen team to figure out what led to women gaining 31 of the 51 total seats. Here are the major takeaways from the report:

1. Open seats continue to have a positive impact on women’s representation.

3. Both political leadership incubators and systems reforms are needed.

4. Within the candidate-focused sphere, multiple organizations are needed.

5. One successful cycle does not mean the fight for gender equality is over. 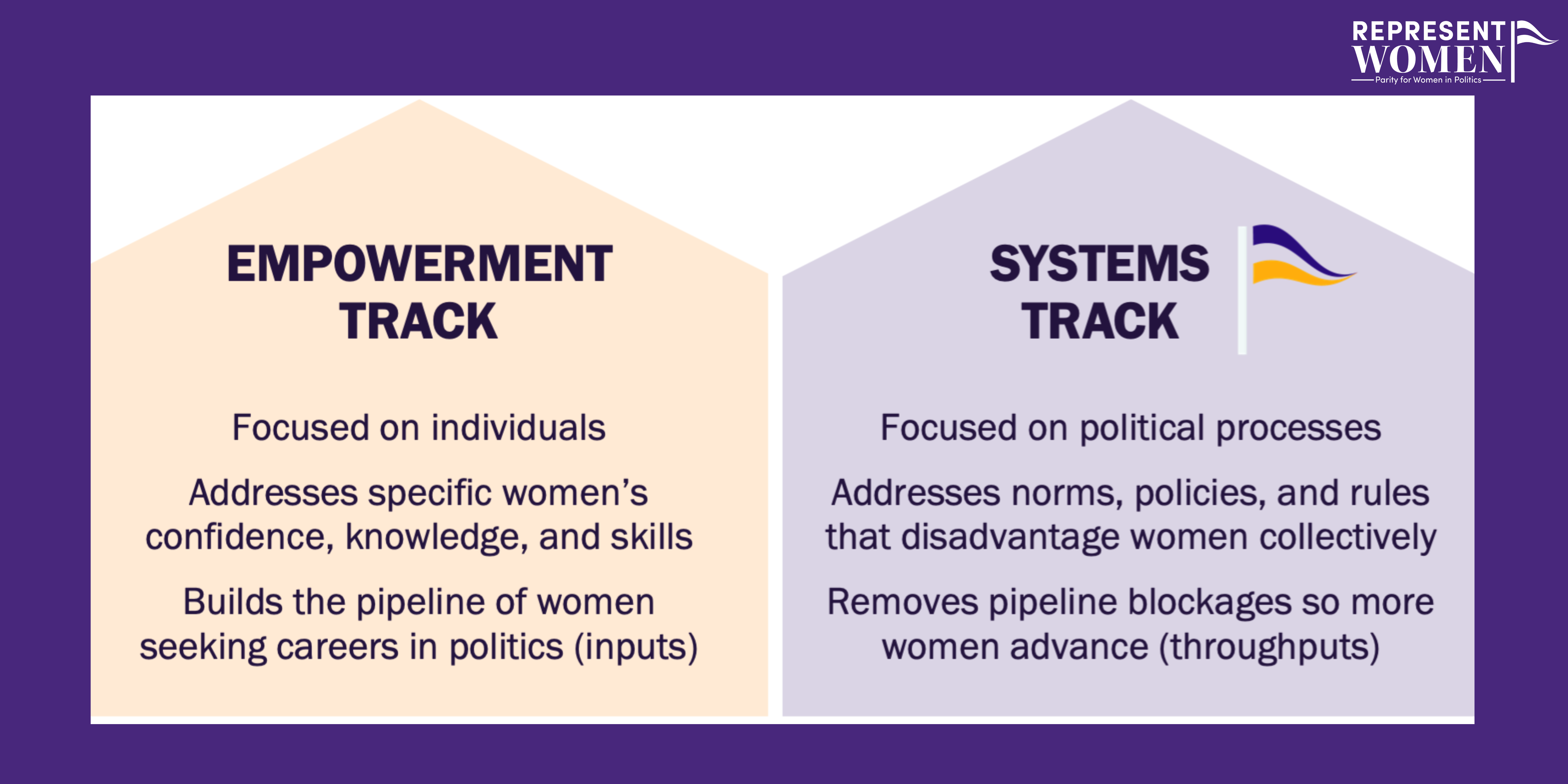 The twin-track approach, as explained above, is crucial to advancing women's representation. Combining both systems reform such as ranked choice voting, term limits, and matching funds (as done in NYC) with candidate-focused groups who provided support and resources to individual candidates is the key to building a healthier democracy. 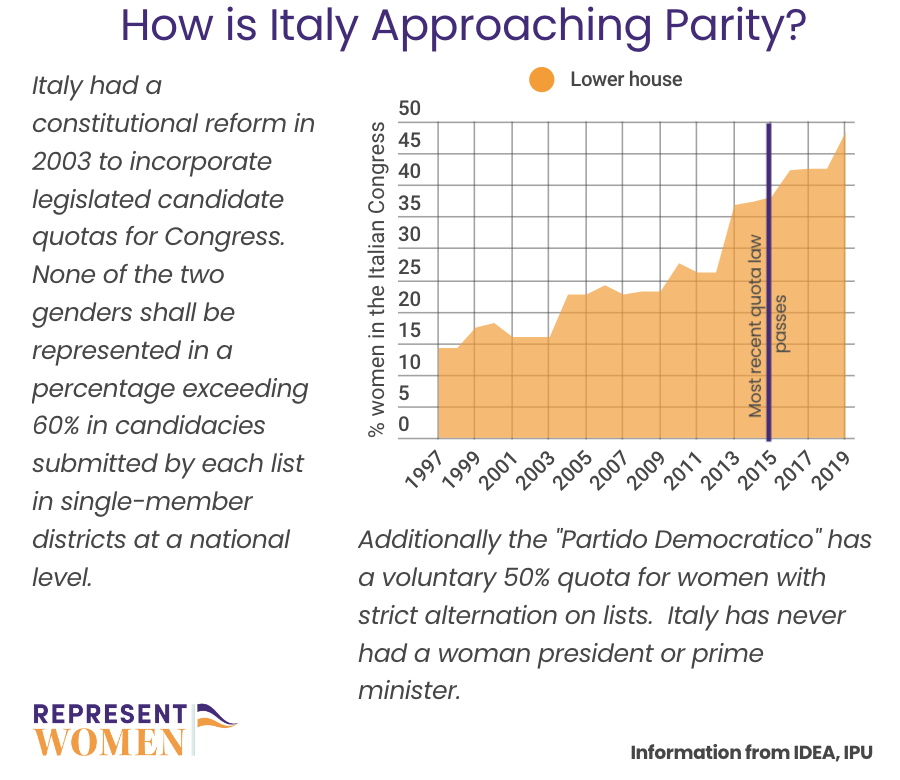 Based on recent opinion polls, Giorgia Meloni is shaping up to be the clear favorite for Italy's upcoming election in just two days. But, this may turn out to be a negative thing for Italian women. Meloni has repeatedly criticized the right to abortion (but has not gone as far as to say she would repeal the current law, which legalizes abortion for the first 12 weeks).

Meloni's election would not only be a step backwards for women, but for immigrants and LGBTQ+ individuals, as well. She has repeatedly smeared migrants, calling for a naval blockade against them, and has referred to the European Union as akin to “the project of ethnic replacement of Europe’s citizens desired by the great capitals and international speculators.” Moreover she has "scoff[ed] at the concept of gender fluidity and supports Italy’s ban on adoption by single people."

Interestingly, Meloni has leaned in to being a woman in politics, despite having attracted generally more male voters. This has had mixed reactions among Italian women.

“It would be better to see a woman in politics hold a role of that kind (like premier), but perhaps not her. Maybe someone with ideas a little more open, more current,″ said Riboli, from Aosta, northern Italy.

But other women back Meloni’s agenda.

Lavinia Mercante, 25, from Rome, said she backs her “as a politician, not as a woman.” Mercante wants to see the political right come to power.

The contentions over whether Meloni's win would have a positive effect on women raise important questions globally. Yes, parity is important, but, we must still judge women on the impact they will have on those who are under their rule– including other women.

Italy ranks 41st on the IPU's August 2022 ranking of women in national parliaments, and has gender quotas but only at the sub-national level.

The amazing teams from RepresentWomen, the Brennan Center, and Ms. Magazine collaborated over the last couple months to bring you the Women Saving Democracy Project! We have brought together women leaders in politics to provide videos, essays, and a podcast on the impact of women's leadership.

As one part of this project, RepresentWomen's Programs and Partnerships Director Katie Usalis sat down with Gowri Ramachandran, senior counsel at the Brennan Center, and two officials who served in the 2020 election: Natalie Adona from Nevada County, Calif., and Tina Barton from Rochester Hills, Mich. to discuss their experience as women protecting democracy:

Ms.: Ms. readers might be surprised to learn that more than 80 percent of election officials are women. What role do you think gender plays in the attacks on officials?

Adona: In one sense the experience of being harassed is different when you’re female, and when you
operate in a world where you feel like you have to work harder than everyone else around you to advance, to get noticed, to enjoy the benefits that other people enjoy.

Barton: A lot of the threats that are coming in to women are very sexually charged, using sexual terms to threaten us, to call us names or to intimidate us in some way.

Ramachandran: When you hear the anecdotal stories from election officials that we heard and you hear about misogynous language or gendered and racial tropes being played upon in these messages and in the sort of lies that are being spread about these public servants, you can see that at the very least gender and race are playing a role in the way in which these people are engaging in this behavior...

But I will say that the good news is that people have been really coming to gether; awareness of this issue is really being raised. The Brennan Center conducted a poll in spring of this year and [found that] despite all of this, despite everything they were reporting, the vast majority of election officials who responded to our poll said they still really love their job. And they’re working on partnerships with law enforcement to make sure that [election officials] feel safe and they know that people have their back as they continue to dedicate their lives to helping the rest of us vote and participate.

On a similar note, the Center for American Women in Politics released a report earlier this week on the experience of violence and harassment for women mayors. Their findings remind us of the importance of creating a space where women and women of color can safely serve their communities: 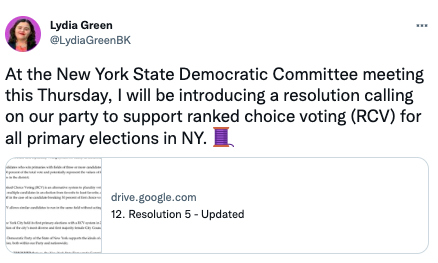 During the New York State Democratic Committee meeting, Lydia Green brought forth a resolution to implement RCV into the primaries for the Democratic party. Green highlights why implementing RCV would be so beneficial:

Last month, over 65% of NY-10 voted for one of four progressive candidates, but a moderate got the nomination instead with a plurality of less than 30% of the vote. Someone out of step with the values of our district will be representing us — this is not democracy...

RCV allows similar candidates to work together & share voters, rather than undermining each other as they do under a plurality winner voting system. In an overwhelmingly Democratic state where candidates for office often have more in common than they do differences, we need RCV.

We already have RCV for city elections here in NYC, and last year we saw this system lead to the election of the most diverse and first ever majority female City Council. RCV leads to better representation.

While the Resolution unfortunately did not pass, the votes show that there is still significant support for RCV. Green plans to propose this resolution again in the spring. 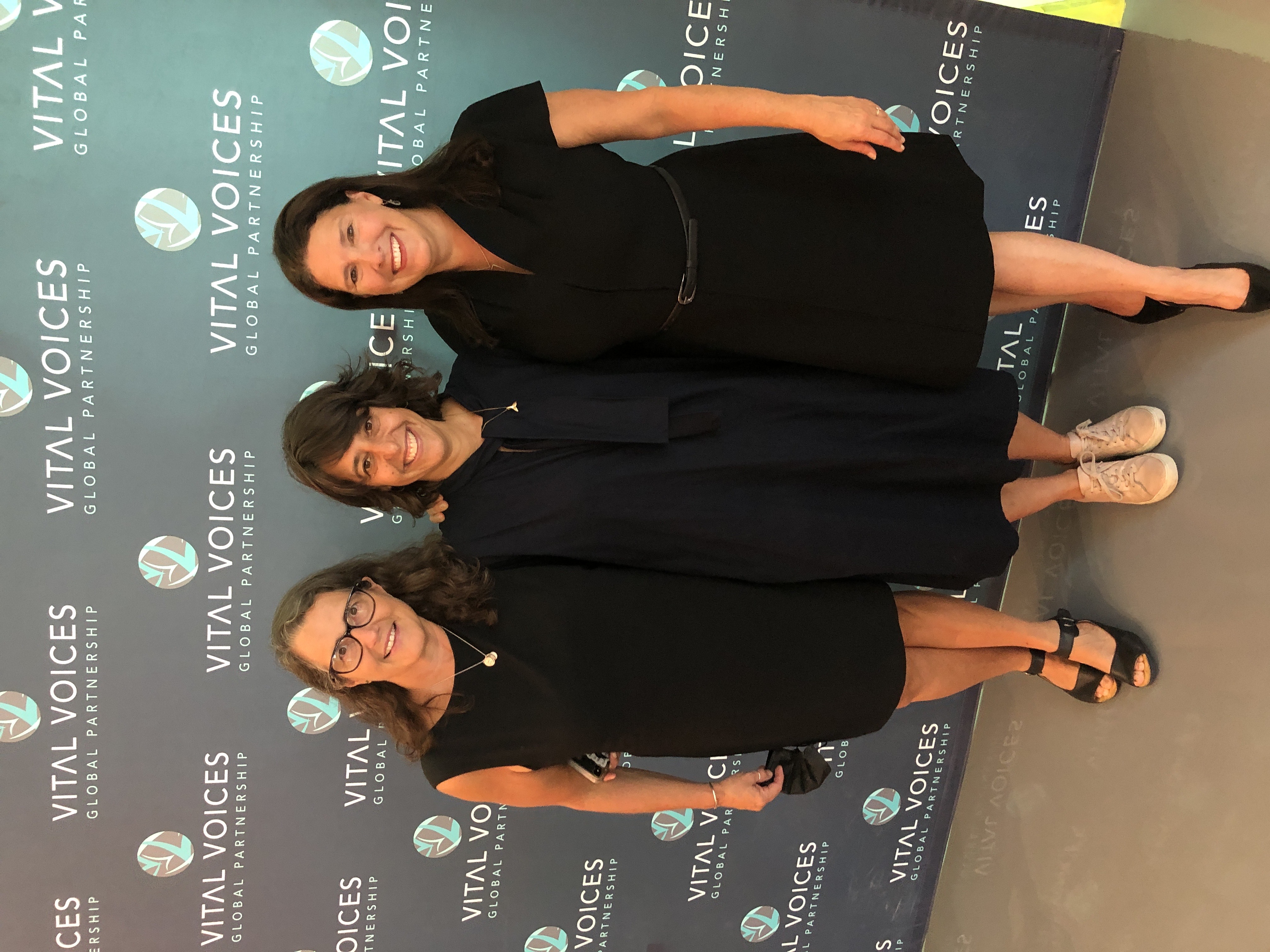 We also had a wonderful time in NYC this week getting to connect with members in the democracy reform and women's representation movements. Thank you to everyone who attended our events! 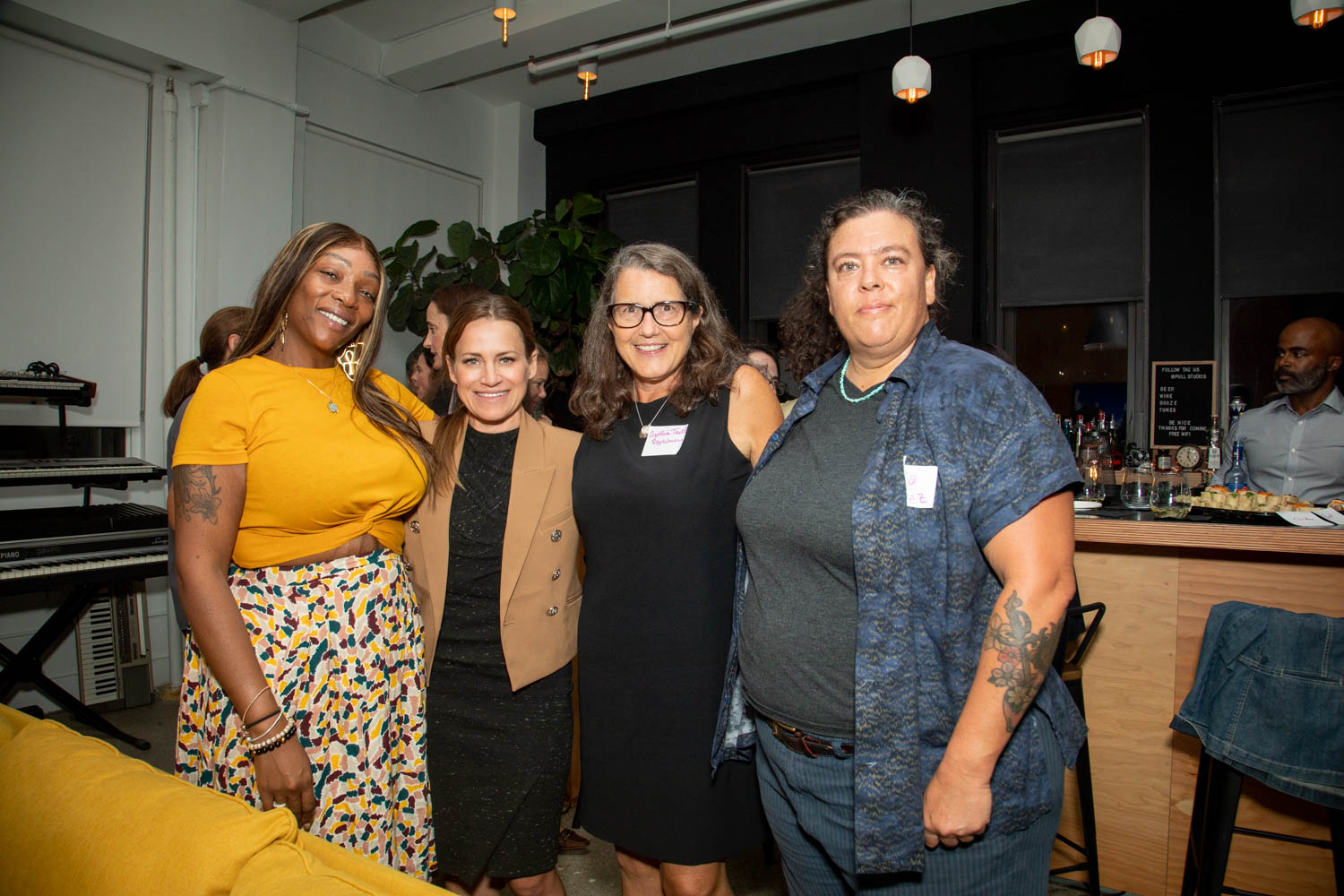 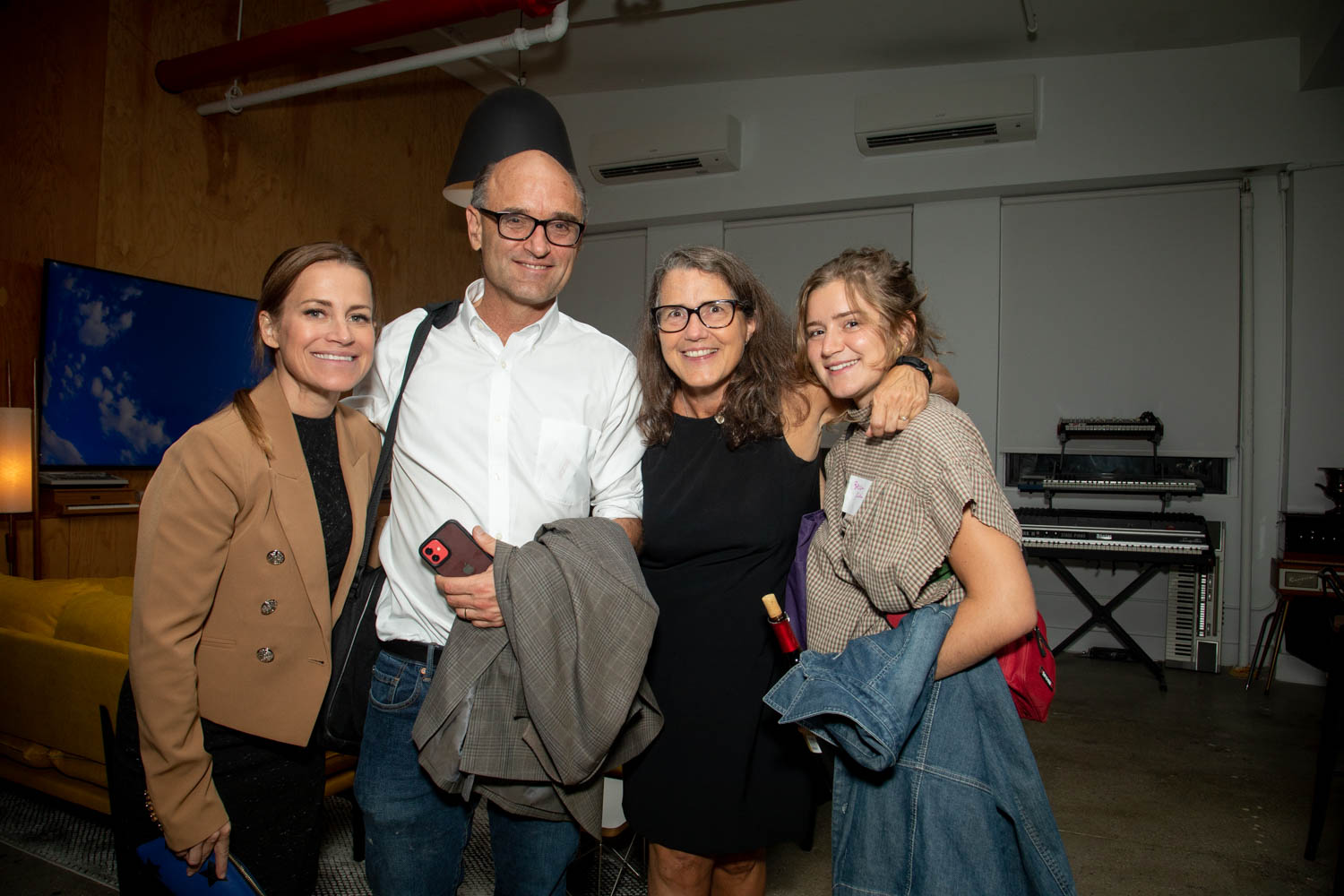 Thank you for reading. Have a great weekend!

P.S. Check out the latest DemocracySOS piece, To Split or Not to Split: The Negatives of Vote Splitting on Diverse Representation by summer 2022 Communications Intern Haley Silva! She dives deep into the detrimental consequences of vote splitting and how RCV can remedy them! 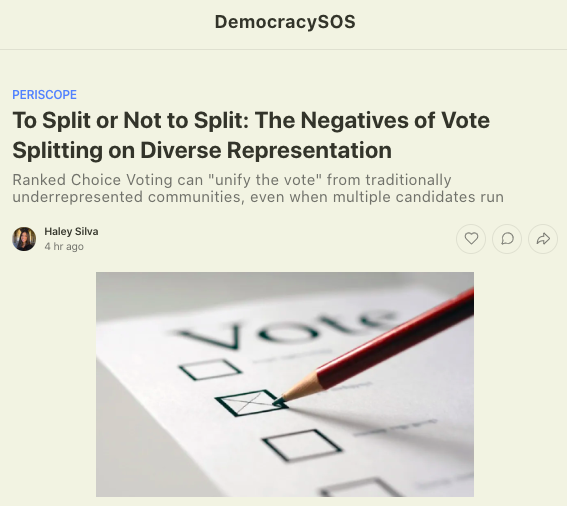