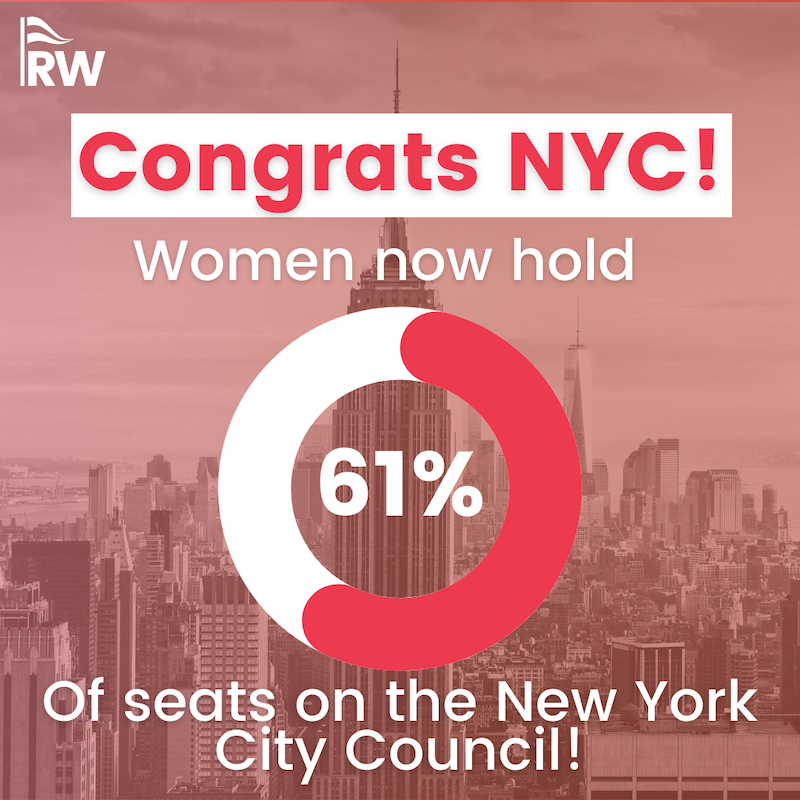 Dear fans of gender balance in politics,
Nearly a century after the first woman was elected to the NYC council, women now hold 61% of the seats and the majority of those women are young women of color. Ranked choice voting was a key ingredient to women's electoral success in 1937 and in 2021.
As my colleague Courtney Lamendola puts it "one of the most promising aspects of ranked-choice voting comes down to how it redefines "electability" for women candidates. While voters and party leaders might otherwise worry about multiple women candidates running against one another in a winner-take-all election, in RCV elections, multiple women can run without splitting the vote, which has had a positive effect on the number of women running and winning in ranked-choice voting elections."
The City online paper offers a good summary of the victories for women in New York City Council races this week:

As voters chose moderate Democrat Eric Adams as mayor, the City Council replenished its ranks of progressives in an election that turned over most of its seats on Tuesday, while potentially adding some Republican newcomers.

Three races were too close to call as of early Wednesday morning — including a re-election bid by Brooklyn Democrat Justin Brannan, who wants to become the Council’s speaker.

The coming class of 51 City Council members includes many first-time candidates and more women serving than in any time in its history. The 31 women who won or are favored to win will more than double the current Council’s class of female leaders.

Among them will be the first Muslim woman to serve, Shahana Hanif of Brooklyn’s 39th District. Speaking to supporters Tuesday night in Brooklyn — following her participation in 10 days of a 14-day hunger strike with taxi workers — Hanif said she will “keep a check on the mayor” in her new role. 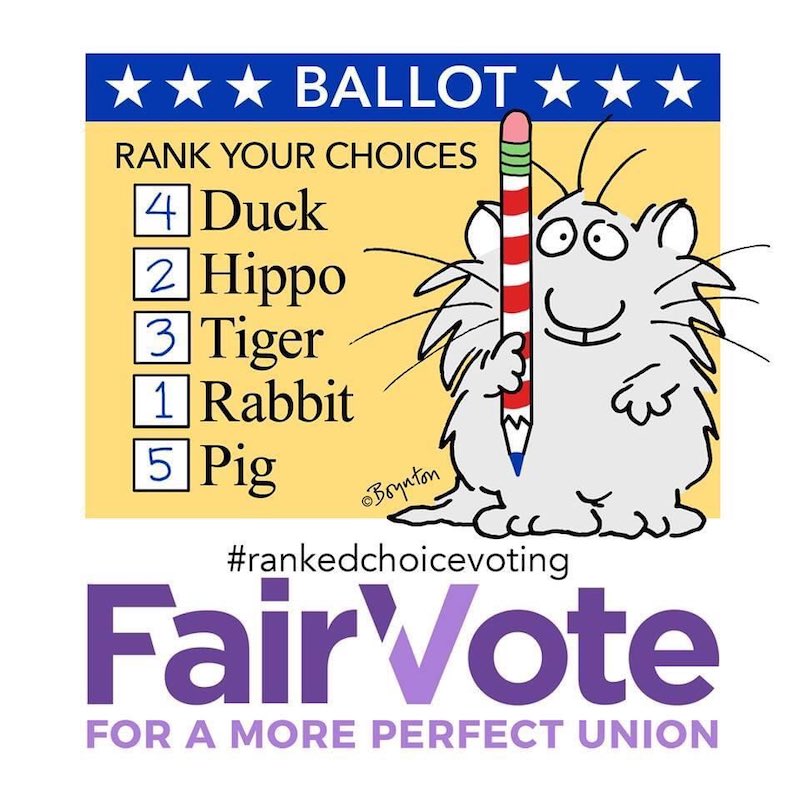 According to a press release from FairVote, there were big wins for ranked choice voting -- and women as a result - around the country this week:

Last night, Virginia Republicans swept statewide races for Governor, Lt. Governor, and Attorney General. All three candidates were nominated during Virginia’s first-ever RCV Republican convention. The use of RCV encouraged a less negative primary race and ensured all three candidates had majority Republican support, unifying the party going into the general election. Winsome Sears will be Virginia’s first Black woman Lt. Governor, and Jason Miyares will be its first Latino Attorney General.
High-profile mayoral races in Boston and Atlanta have gone to expensive runoffs or second-round elections this year. The use of RCV has removed the need for separate runoffs, and an extended campaign season, in large cities such as New York City and Minneapolis. 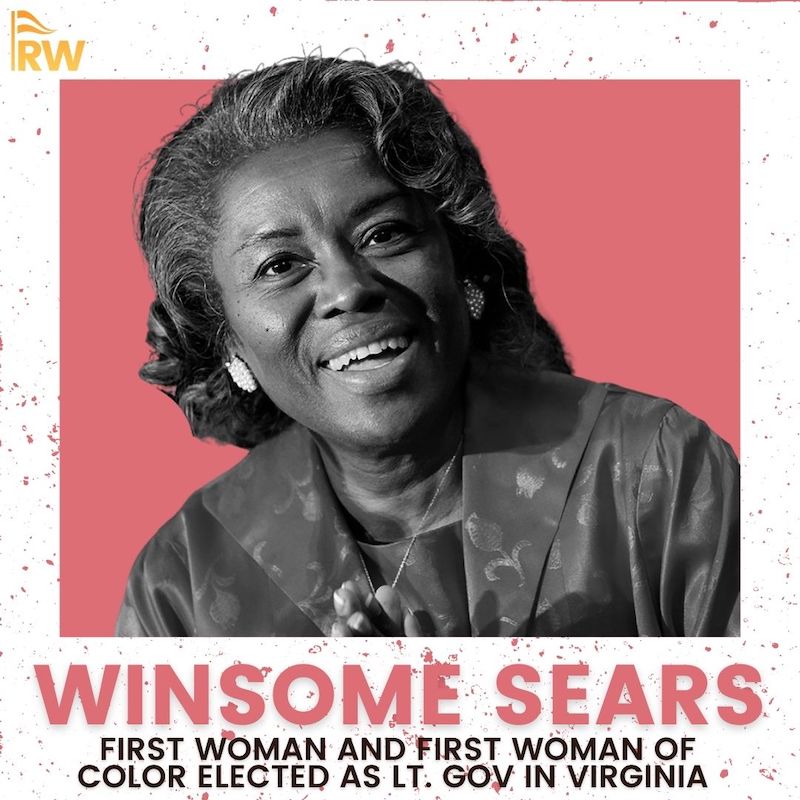 As noted above, Winsome Sears was elected lieutenant governor of Virginia this week - she is the first Black woman to be elected to statewide executive office in the state, this story from The Washington Post reports on her win:
Virginia’s political landscape saw a historic shift this week when a Black, Jamaican-born woman won the race for lieutenant governor and the son of a Cuban refugee became the state’s next attorney general.

The fact that Winsome E. Sears and Del. Jason S. Miyares (Virginia Beach) are both Republicans reflects the inroads the GOP is making in the African American and Latino communities that have long favored Democrats, political analysts say.

By reaching those historic milestones first with a ticket led by Glenn Youngkin, the governor-elect, that was more diverse than the Democrats’, which featured two White men, Republicans now hold a symbolic advantage over Democrats, said L. Douglas Wilder, who as a Democrat during the 1980s and ’90s became Virginia’s first Black lieutenant governor and governor. 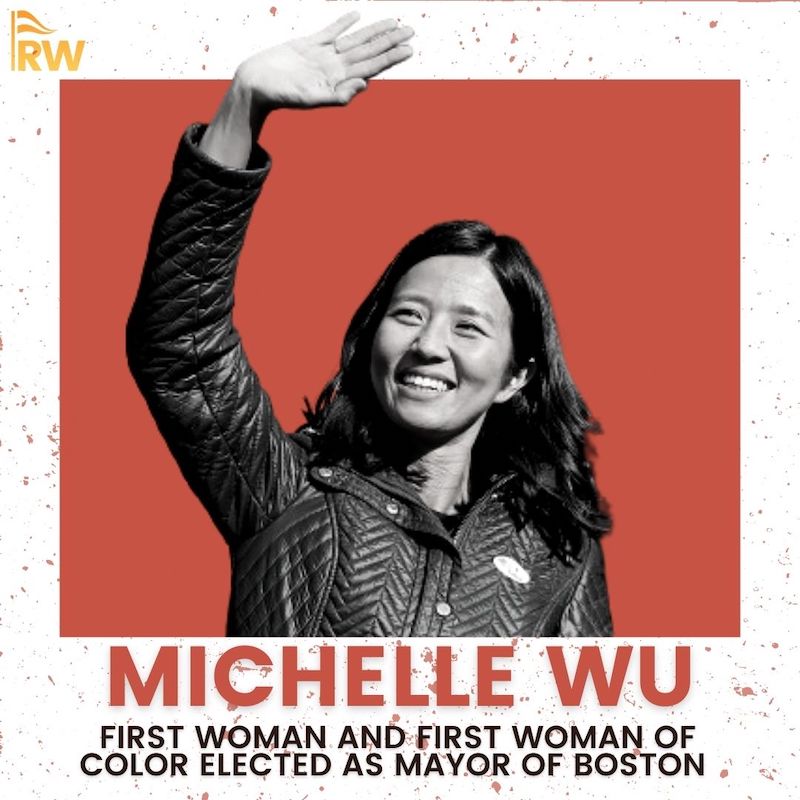 Voters in Boston, MA have elected the first woman and the first woman of color as mayor according to this piece in Ms Magazine by RepresentWomen's digital media specialist Kaycie Goral:
City Councilor Michelle Wu has shattered Boston’s glass ceiling—she will be the first woman and person of color elected as mayor in the city’s history.
“One of my sons asked me the other night if boys can be elected mayor of Boston. They have been, and they will again someday, but not tonight,” Wu told supporters Tuesday. “On this day, Boston elected your mom because, from every corner of our city, Boston has spoken.”

This election significantly departed from the city’s usual political environment, with no incumbent seeking reelection. This mayoral race created a fruitful scenario for multiple women of color to run for the mayor seat. Research from think tank RepresentWomen indicates that women are more likely to win in open-seat races like that of Boston. Male incumbency advantage and the risk of becoming a “spoiler candidate” if multiple women run causes a chilling effect for women candidates. 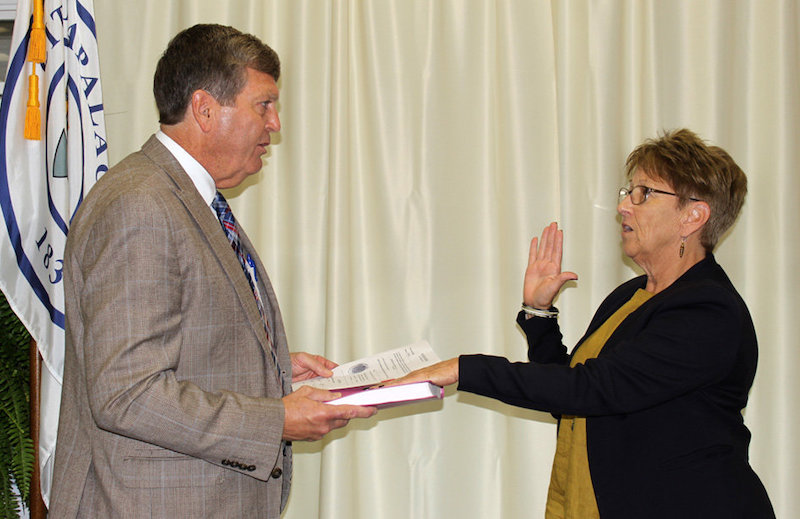 City Commissioner Anita Grove is sworn into office by County Judge J. Gordon Shuler.
Apalachicola, Florida now has an all-women city commission according to this story in The Times - thanks to Melanie Humble for sending me this good news:
It’s not a first for our country or our state, but it is for Franklin County, and an uncommon picture for the state of Florida.

Apalachicola now has an all-female city commission, with the swearing in Oct. 5 of Mayor Brenda Ash to complete the last two years of the four-year term of the late Kevin Begos, and with that taking of oaths for full four-year terms for commissioners Anita Grove and Donna Duncan.

The three join incumbents Despina George and Adriane Elliott on the commission.

Ash, the first female mayor of Apalachicola, said she is looking forward to the future. “I think it’s going to be good,” she said.

“As with any board, each of us brings a different perspective to the role, which is good,” she said. “We all have different points of view, different backgrounds.

“Women see things differently; we have a tendency to look at things from all perspectives,” Ash said. “We’re more apt to look at unintended consequences of a decision." 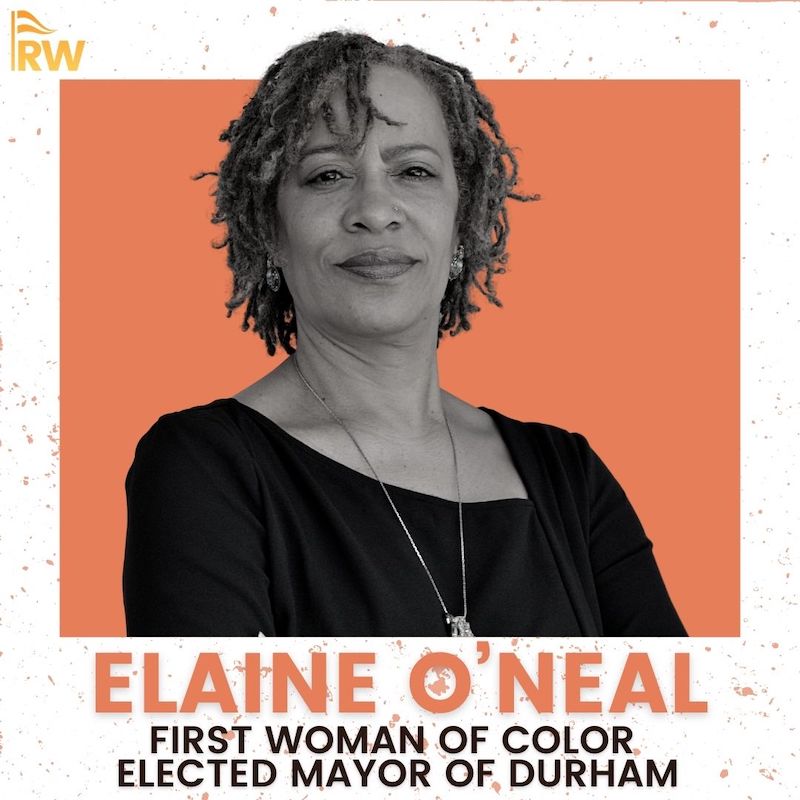 Congratulations are also in order for Elaine O'Neal who was elected mayor of Durham, NC this week - she is the first woman of color to hold this office as The Chronicle reports:
Elaine O’Neal became the first Black female mayor of Durham Tuesday evening.

DeDreana Freeman and Mark-Anthony Middleton also won reelection in Wards I and II in the Durham City Council elections. Leonardo Williams won the Ward III election in a much closer contest, only beating opponent AJ Williams by 635 votes.

Only 15.18% of registered Durham voters voted in Tuesday’s municipal elections, according to the North Carolina State Board of Elections. 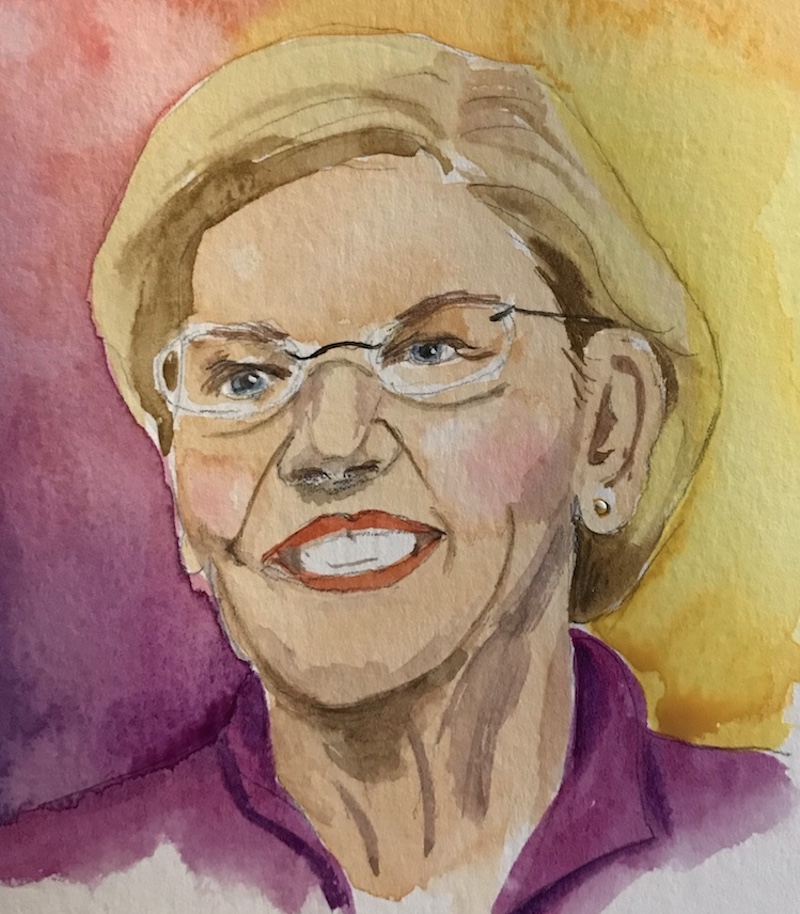 Elizabeth Warren painted by Melanie Humble
Katrina vanden Heuvel, publisher of The Nation magazine, wrote a column this week in The Washington Post about the persistent leadership of Senator Elizabeth Warren on pressing issues that impact everyone, but impact women and families in particular:
As the debate rages over President Biden’s social spending bill, with several long-sought progressive ideas tantalizingly close to reality, there’s been little attention paid to the woman who’s helped lead the push for them throughout her career: Sen. Elizabeth Warren.

Warren (D-Mass.) is familiar with the history of progressive advocates being consistently dismissed until their visions become realized. At the height of her 2020 presidential campaign, she delivered a remarkable speech putting her ambitious plans in powerful perspective: “Over and over throughout our history, Americans have been told that big structural change just wasn’t possible: They should just give up. … They didn’t give up. They organized. They created a grass-roots movement. They persisted. And they changed the course of American history.”....
Warren delivered that campaign speech on big structural change just half a block from the site of the Triangle Shirtwaist Fire, where, in 1911, a corporation’s negligence toward its workers cost 146 lives. (That event particularly resonates in a year in which we’ve seen strikes against at least 178 employers, and Americans are demonstrating the most public support for unions since 1965.) After the 1911 fire, female factory workers across the city protested and went on strike. They were routinely ignored until one witness, Frances Perkins (then executive secretary of the New York City Consumers League), successfully pushed for labor reforms in New York state. Perkins went on to become labor secretary for President Franklin D. Roosevelt — the first woman ever to hold a U.S. Cabinet position — and the reforms she pushed for in New York became part of the blueprint for the New Deal.

“So what did one woman — one very persistent woman — backed by millions of people across the country, get done?” Warren asked. “Social Security. Unemployment insurance. Abolition of child labor. Minimum wage. The right to join a union. Even the very existence of the weekend. Big. Structural. Change.”

She’s right. Change comes from people like Perkins and Warren: those with the moral clarity and the tenacity to continue the fight for progress, through losses and long odds — until that “right moment to rendezvous with a political need” finally arrives. And for her efforts, Warren hasn’t gotten the credit she deserves. 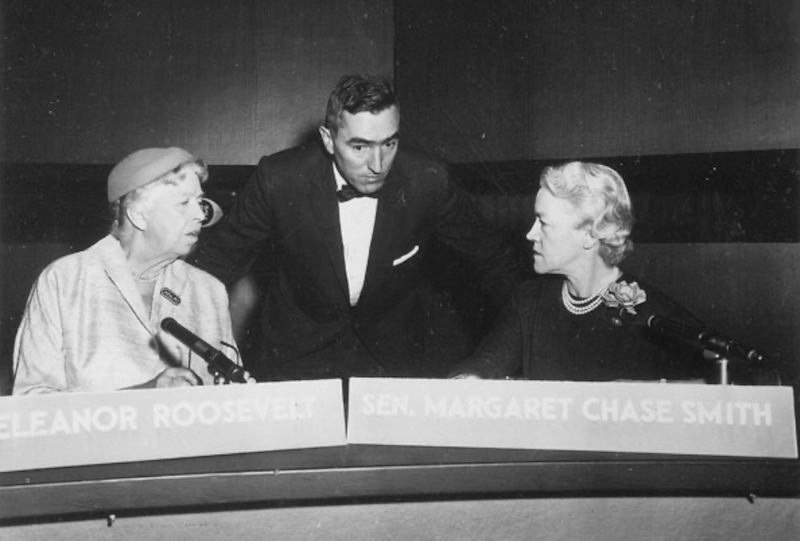 Eleanor Roosevelt debates Margaret Chase Smith on November 4, 1956
Sixty five years ago this week Eleanor Roosevelt and Margaret Chase Smith took part in the first ever televised presidential debate as leaders of their respective parties. How I would have loved to have been in the room for that event and to have learned from them about how to be a gracious and effective leader while also thinking about the big structural reforms that Elizabeth Warren and so many others know are necessary.
That's it for this week my friends, by next week we may know the results for women in the state legislative elections in New Jersey and Virginia and I will be sure to share them here.
Cynthia
P.S.  Don't forget to check out this week's suggested reading from the team at RepresentWomen! 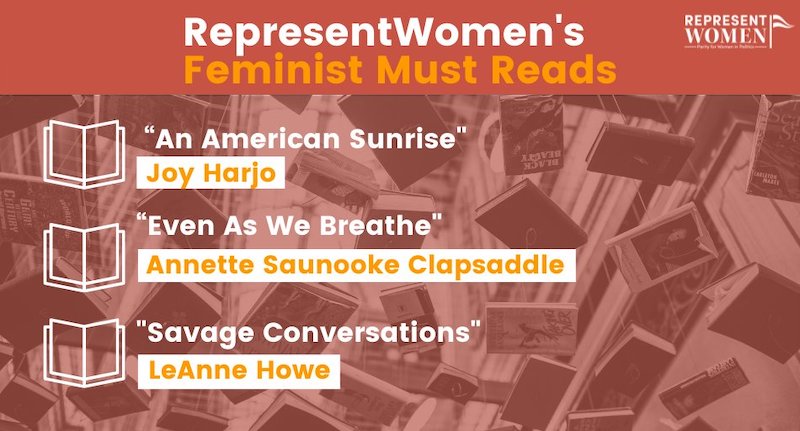