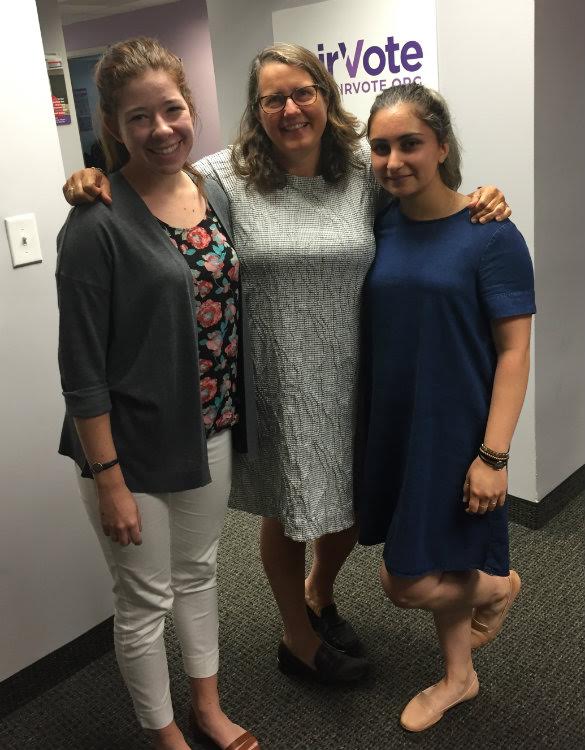 There is simply too much to do! This week will be short on content but long on appreciation!

I am reminded daily of the absolutely necessary and fabulous work that all of you are doing to advance women's representation in the United States and around the world. I hope that all of you are fortified by the power of our growing movement - made richer by sharing our successes, building relationships, and holding fast to the vision of gender parity.

I am especially grateful this week to the team of fabulous interns who worked at Rep2020 this summer! Many thanks to Anna Scheibmeir, Neeknaz Abari, and Katie Shewfelt who spent the summer delving into research, writing projects, updates to the website, and video production!

It would be great if you can watch, 'like', and share their video on Ranked Choice Voting - Katie wrote the script, Neeknaz did the animation, and Anna is the narrator - with the hashtags #RankedChoiceVoting #RCV #WomensRep or #paths2parity! Thanks!

While sorry to say goodbye to these exceptional young women, I am thrilled to welcome Toni Gingerelli - a 2017 graduate of Rutgers University - who has a passion for gender parity and lots of terrific experience! Toni will be working at Rep2020 as a Democracy Fellow for the coming year!

Women's Equality Day - August 26th - is fast approaching. There will surely be a tidal wave of posts about the status of women's equality. I expect that Bella Abzug - who proposed the holiday in 1971 to celebrate passage of the 19th Amendment - would be sobered to see the many challenges women still face but motivated to push even harder for parity - and equality:

The observance of Women’s Equality Day not only commemorates the passage of the 19th Amendment, but also calls attention to women’s continuing efforts toward full equality. Workplaces, libraries, organizations, and public facilities now participate with Women’s Equality Day programs, displays, video showings, or other activities.

Joint Resolution of Congress, 1971
Designating August 26 of each year as Women’s Equality Day

WHEREAS, the women of the United States have united to assure that these rights and privileges are available to all citizens equally regardless of sex; and

WHEREAS, the women of the United States have designated August 26, the anniversary date of the certification of the Nineteenth Amendment, as symbol of the continued fight for equal rights: and

WHEREAS, the women of United States are to be commended and supported in their organizations and activities,

I so appreciate Bella and all the many before us who dreamed of equality.