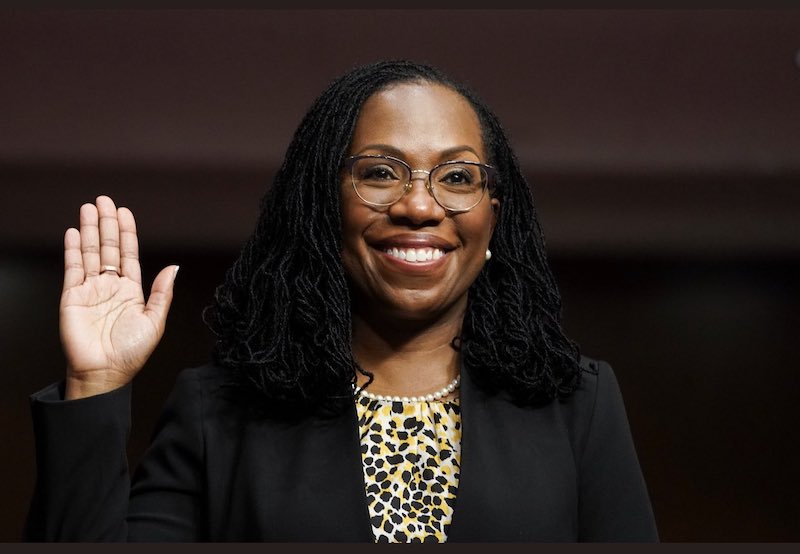 Judge Ketanji Brown Jackson
Dear friends of women's representation,
While it has been amazing to read all the stories about the confirmation of Judge Brown Jackson to the Supreme Court, Black women continue to be under-represented at all levels of government. There are bright spots - like the NYC Council that is now led by women of color - due in part to the combination of 21 in 21, public financing, and ranked choice voting. But according to this piece by Glynda Carr, Monica Simpson, and Leah Daughtry in USA Today we have a lot of work to do to reach a democracy that reflects the communities it represents:

Black women are one of the strongest voting blocs in our nation, making up 7.6% of the population. Yet we account for just 4.9% of congressional members.

Despite Vice President Kamala Harris (a Black woman who is the first woman to hold the second most powerful position in the free world) presiding over the Senate as it voted on Jackson’s confirmation, there were zero Black female senators to vote for the judge. There are no Black female governors in this country. Fewer than 20 Black women have ever held a statewide elected executive office, and Black women hold just 354 of the country’s 7,383 state legislative seats.

We must increase the number of Black women in elected office and expand the political power of Black women in order to achieve equitable representation across all levels of government. Too often, decisions are made that impact our communities without having our voices at the table.

By electing more Black women, by seeing more Black women in positions of power, we begin to inspire and build a pipeline of Black female decision-makers. Visibility and representation are powerful tools to inspire the next wave of lawyers, doctors, congresswomen, organizers, CEOs, teachers and Supreme Court justices. White supremacy’s tight grip on the institutions in our country prevent us from having the same opportunities as white men and women. 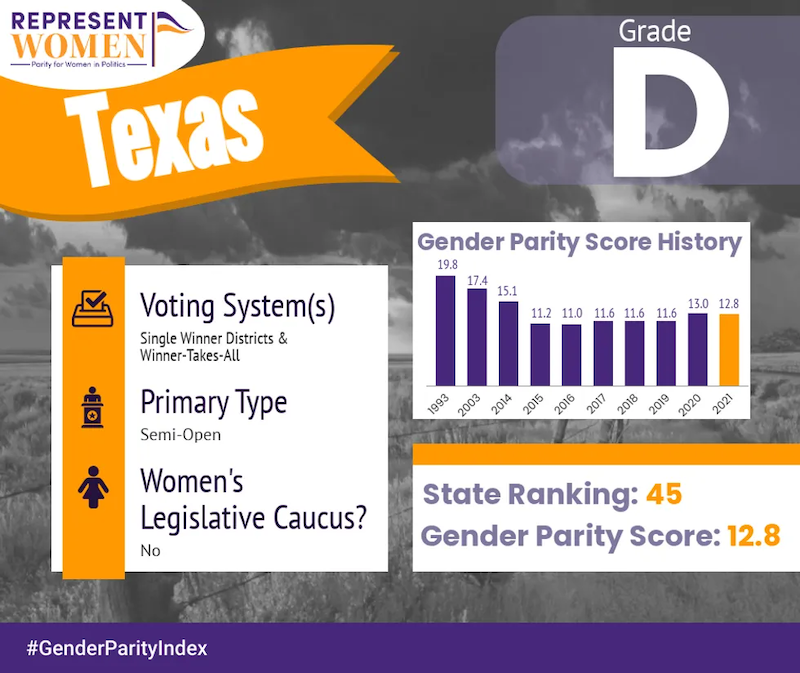 Another election year in Texas means another large batch of high-profile races going into a second round runoff, 23 to be exact. These races are expensive, time consuming, and disproportionately disadvantage women candidates - instant runoff aka ranked choice voting is an efficient solution to this problem. This article in The Fulcrum from RepresentWomen's strategic partnerships director Katie Usalis explains:

Texas election law states that primary candidates must win with a majority, which becomes tricky when there are more than two candidates running. This results in an extraordinary amount of elections being forced into a runoff, where the top two candidates compete head-to-head in a second round of primary elections.

What’s so wrong with this? Two words: time and money. Both of which women candidates generally have less of...

...We also know that campaigning is expensive, especially for women candidates. RepresentWomen’s 2020 PAC Report found that individual donors are less likely to be women, that Republican women are the most underfunded candidates, and it simply takes more money to win as a woman. The report goes on to say, “women are underfunded by PACs and in turn are reliant on smaller donations from a larger network of donors (i.e. 'grassroots fundraising’). Grassroots fundraising requires more time to raise the same amount of money putting women at a strategic disadvantage.”

The time cost of dragging out an election season is a serious burden for candidates, especially women. Our current culture dictates that women take on the majority of unpaid work at home, which means women who enter the workforce carry a dual burden that leaves them in major time poverty. The Pew Research Center found that working mothers in the United States spent an average of 25 hours per week on housework and childcare, compared to working fathers' 16 hours. Imagine hearing that your race has gone into a runoff and you have to start all over again! 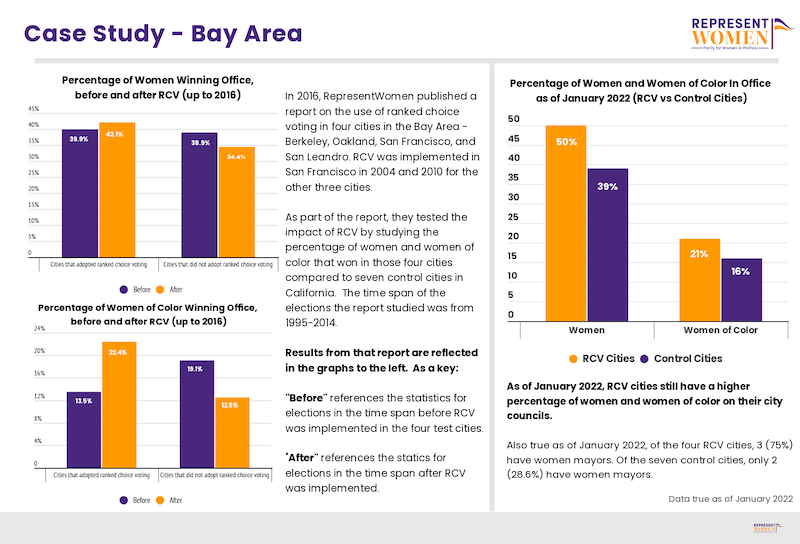 In response to anti-RCV legislation proposed in California, Oakland mayor Libby Schaaf and Berkeley mayor Jesse Arreguin penned an OpEd in support of continued use of ranked choice voting in the Bay Area, citing RepresentWomen's data on the impact of RCV and the costly reality of two-round runoffs:
In an article written by Arreguín and Oakland Mayor Libby Schaaf, the two noted how RCV removes the need for runoff elections.

Holding just one election instead of two reduces the burden on voters, and ultimately leads to far more voters — and a far more representative group of voters — participating in choosing their local government,” Schaaf and Arreguín said in the article.

Arreguín and Schaaf also emphasized the role RCV plays in increasing diversity across the political spectrum.

Having been elected through RCV systems, both argued that this system of voting allows for more representation in government.

“In communities that have implemented RCV, their elected officials are more likely to represent the diverse demographics of that community,” Arreguín said in the emailed statement. “In all Bay Area cities with RCVs, their mayors are either women or people of color. Additionally, Councils in cities with RCV are comprised of 51% women, whereas cities without it average 41% women. 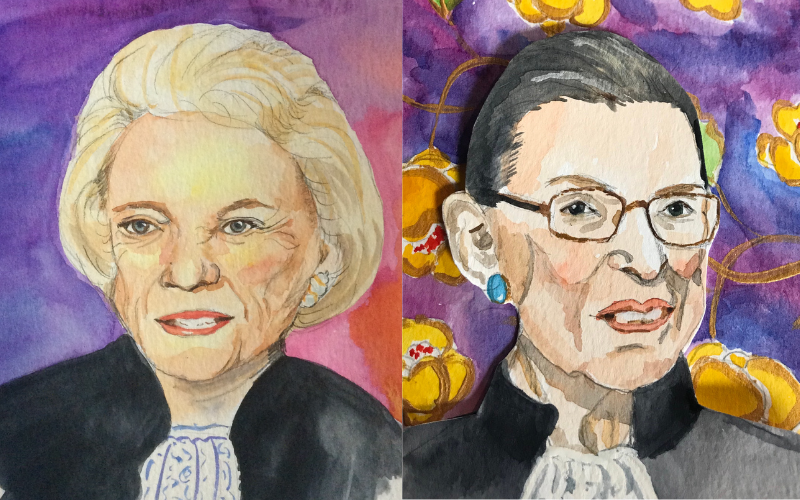 Just 14 of the 200 statues in the U.S. Capitol depict women but according to this article in The 19th by Mariel Padilla that is about to change:

Sandra Day O’Connor and Ruth Bader Ginsburg — the first women to sit on the highest court in the country — are joining the relatively short list of women memorialized as sculptures at the U.S. Capitol. Bipartisan legislation to add statues of the two Supreme Court justices to the Capitol was spearheaded by women lawmakers, passed the Senate last December, passed the House at the end of March and signed by President Joe Biden on Wednesday.

“Justices Ruth Bader Ginsburg and Sandra Day O’Connor were trailblazers long before reaching the Supreme Court, opening doors for women at a time when so many insisted on keeping them closed,” Sen. Amy Klobuchar of Minnesota, a Democrat who introduced the legislation, told The 19th, after the bill was signed. “The Capitol is our most recognizable symbol of democracy, a place where people from across our country have their voices represented and heard. It is only fitting that we honor their remarkable lives and service to our country by establishing statues in the Capitol.”

Klobuchar said she was able to pass the news on to O’Connor’s son and Ginsburg’s daughter and looks forward to “welcoming them to the Capitol” to see their mothers’ lives commemorated. As it stands, only 14 of the more than 200 statues on the Capitol grounds are women, she added.

ReflectUS partner She Should Run and ReflectUS announced a new program this week to equip women with the support they need to launch careers in politics, as ReflectUS CEO Tiffany Gardner explains below:
I am also delighted to announce the launch of our ground-breaking, cutting-edge program - She’s Ready. The She’s Ready Program is a pilot program between ReflectUS and Coalition member She Should Run to provide women individualized support on their political leadership journey.  As women move through She Should Run's suite of programs to the point of declaration, ReflectUS will provide support by creating a customized political leadership plan, connecting them to other national, state and local resources and conducting periodic check-ins. As studies demonstrate, there is a period of time between when women decide to enter political leadership and when they actually declare their candidacy or apply for an appointment. She’s Ready will help to ensure we do not lose this important pipeline during this intervening time. 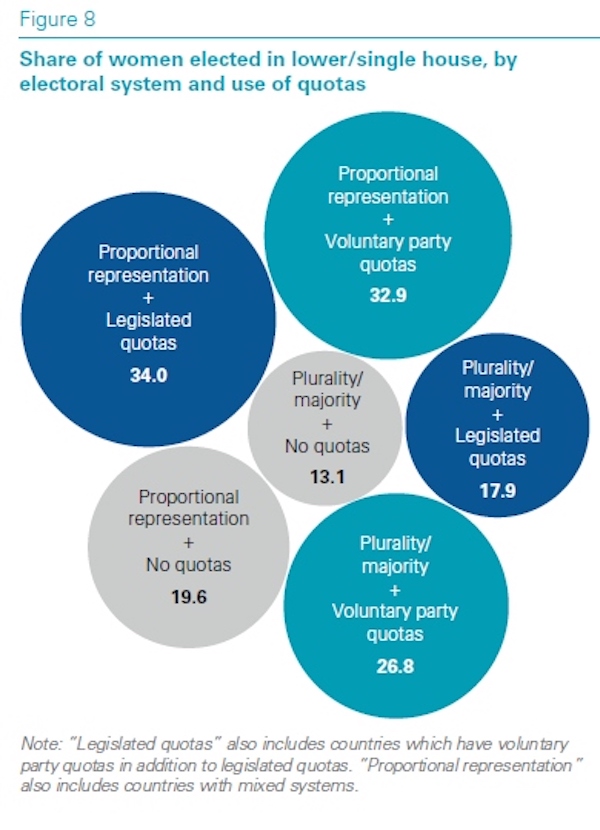 The BBN Times wrote this week about why some countries rank higher on the Inter-Parliamentary Union's list of women in government around the globe. Not surprisingly the United States, with its plurality/majority system and lack of gender quotas, ranks behind nearly all established democracies:
Much of the report is a country-by-country overview of changes in the last year or or two. But overall, what causes some countries to have substantially higher shares of women than others? Cultural and historical factors surely play a role, but the report emphasizes some institutional factors as well. For example, a number of countries have a quota requirement: for example, requiring that each party must have a certain proportion of women among its legislative candidates.

Another institutional factor that seems to matter here is that countries where elections are by majority vote in a district seem to have a smaller share of women legislators than those with proportional voting–that is, where voters cast their ballot for a party, parties receive seats in the legislature according to how many seats they receive, and parties (mostly) determine who will fill those seats. 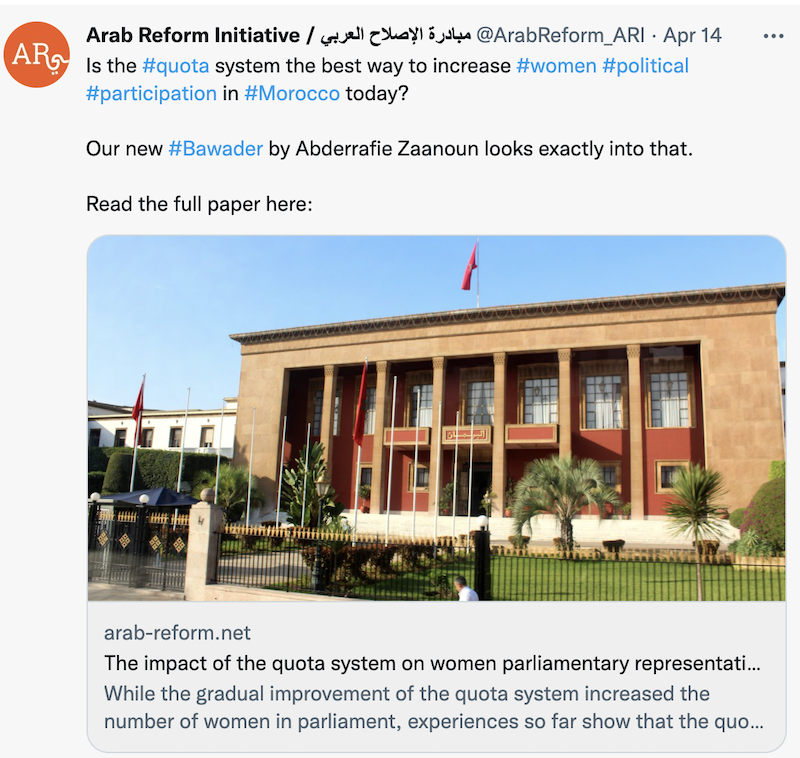 Gender quotas are not a panacea, of course. There are often barriers based in deep cultural biases which must be addressed for women's representation to increase, as is the case in Morocco according to this new report from the Arab Reform Initiative:
After decades of patriarchal dominance in representative institutions, Morocco began to implement transitional measures for affirmative action in favour of women in the political sphere since the beginning of the new millennium. This was achieved through a series of reforms that have facilitated women’s access to Parliament by implementing the women’s quota, which has helped alleviate the prejudices that have long perpetuated male dominance in the field of political representation. The gradual improvement of the quota system increased women's participation across institutions, especially the House of Representatives, and to a lesser extent, the House of Councilors – with a greater focus on gender balance in the make-up of the executive branch.

However, the statistical analysis of parliamentary representation indications may give a false image of the reality of women’s political empowerment. Previous experiences have proven that the quota system has been used as an electoral patronage tool by a political class that exploited affirmative action measures to seize more representative seats through kinship and personal connections. This was done at the expense of giving priority to women who have been fighting and progressing across parties and civil and human rights networks. In light of the above, this paper will look into the contexts surrounding the implementation of the women's quota in the Moroccan electoral system, its advantages and disadvantages, as well as the possibility of redirecting the quota system to achieve true political empowerment for women.

To analyse these issues, the first section will discuss the paths and outcomes of women’s parliamentary representation in Morocco before and after the adoption of the quota system. The second one will list the quota system’s advantages and reveal the true repercussions that the numbers may conceal before exploring opportunities to improve affirmative action measures in a way that strengthens women’s political role and enhances their contribution to public policy-making. 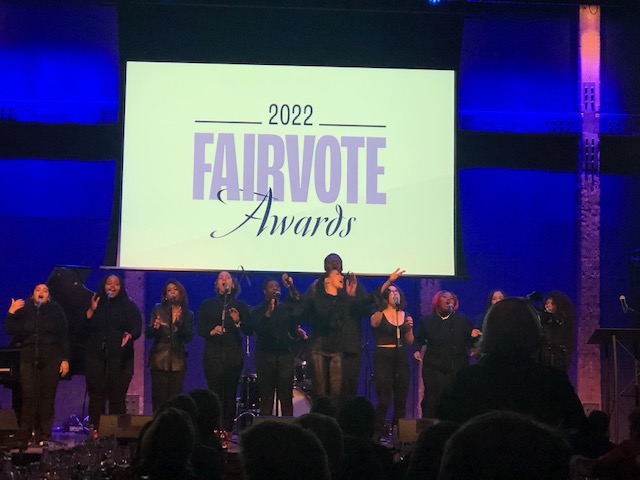 Sing Harlem choir at the FairVote Awards this week 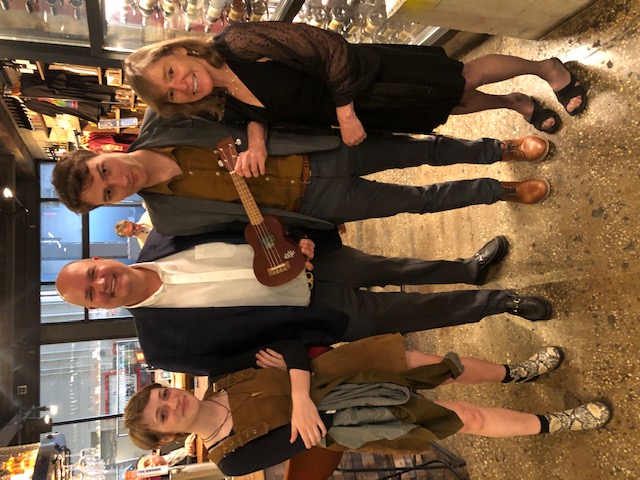 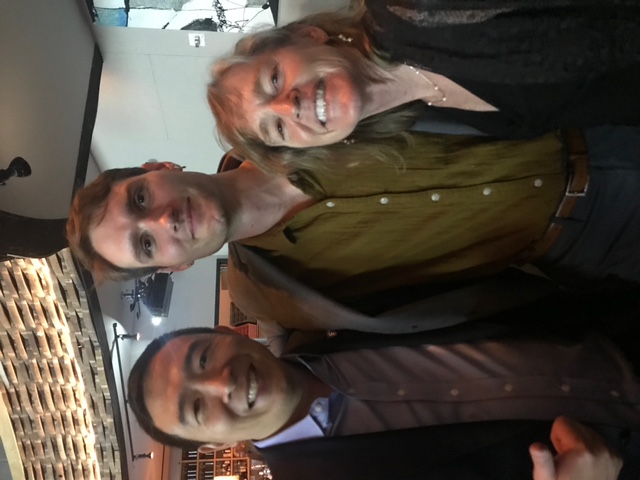 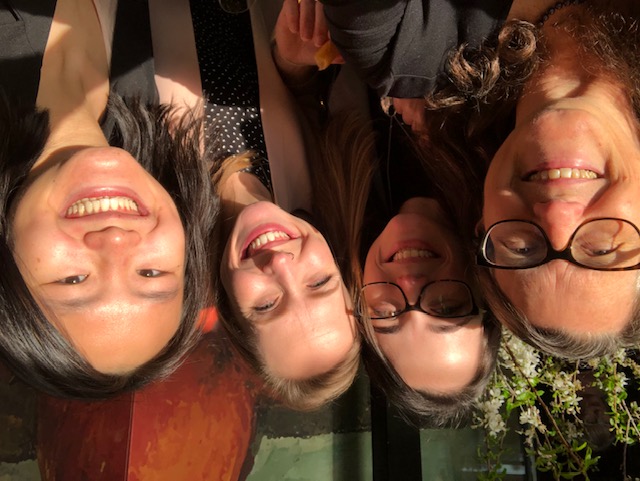 RepresentWomen team members Courtney Lamendola, Katie Usalis and Paige Chan
I was in NYC this week to help celebrate the FairVote Awards which this year honored the work of Danielle Allen, Andrew Yang, Kathryn Murdoch, and Katrina vanden Heuvel - learn more about the honorees in this video featuring the amazing Sing Harlem choir!
That's all for this week my friends,
Cynthia
P.S. Check out this week's suggested reading from the team at RepresentWomen: 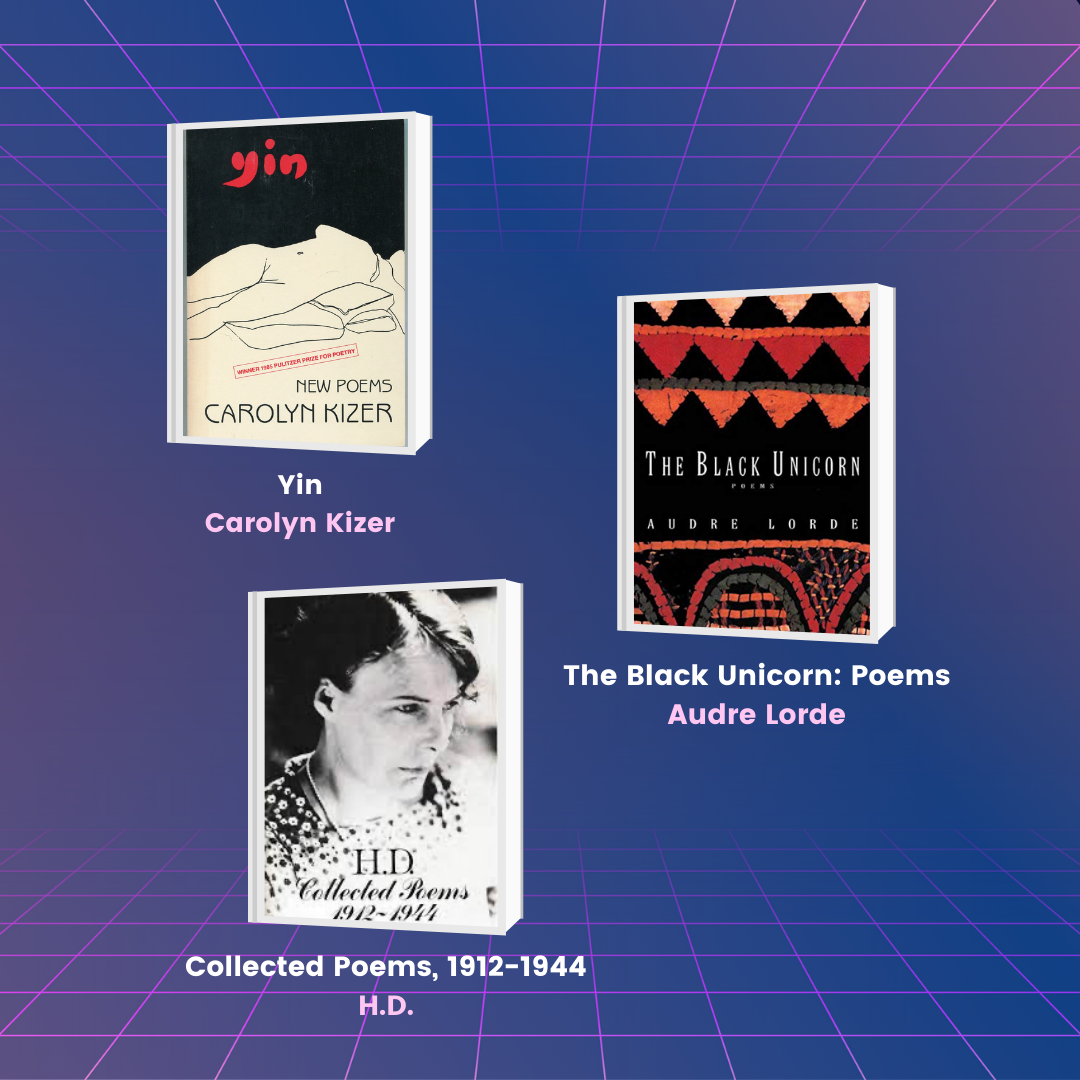