It’s tempting to be really encouraged about the state of women’s representation in politics today. After all, we've seen success stories everywhere. Elise Stefanik, a Republican out of New York, earned the title of youngest congresswoman ever elected when she took office in 2014. Mia Love became the first black Republican woman to be elected to Congress when she won in Utah that same year. In fact, all over the country, 2014 was hailed as a “Year of Women.”

Both of these women are unquestionable victories for their constituents and women’s representation in general. But are they indicative of a broader trend towards parity? Underneath the celebratory headlines, is the country making substantive progress towards gender parity in politics? Unfortunately, the answer is a hard “No.”

The problem is that the trend of women in Congress (or really any other elected offices) isn’t the smooth upward slope that most people imagine.  In fact, the national trends of increasing representation are leveling off, like a plateau, rising to a certain point then flattening out. Although the elections of Elise Stefanik and Mia Love representent positive signs for women’s representation, they are anomalies and not indicative of the overall sluggish path to gender parity in Congress. Just look at the trend of women in state legislatures, a critical pipeline to higher office. 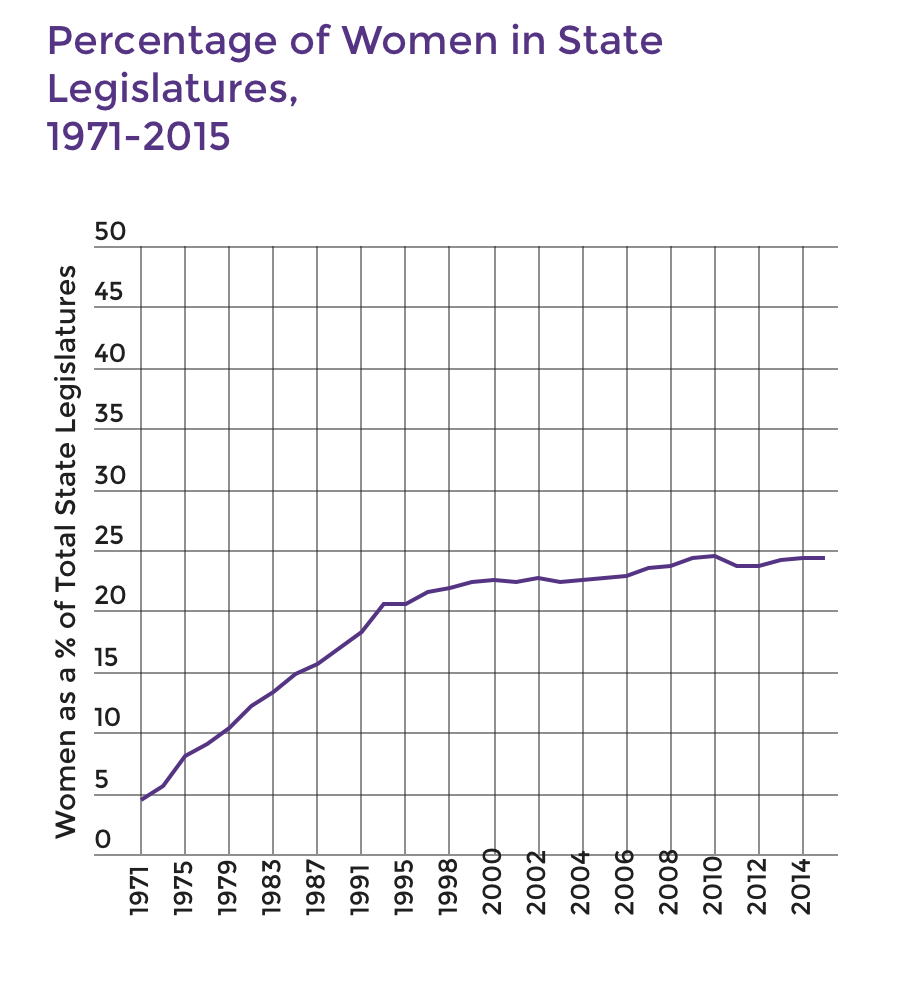 If these current trends of nearly “break-even” progress continue, we won’t reach political parity. Not in our lifetime, not in our children’s lifetime, not ever. There is nothing acceptable about barely creeping towards equality for women in politics. As long as women remain only a small fraction of overall state legislatures and Congress, true political equality for women can never be realized-not in any sense.  Numerous studies have demonstrated that there are just as many qualified potential female candidates as there are men. However the number of women recruited for office, the way women are recruited, and the electoral systems in which they are forced to run institutionally stack the odds against them. As Douglas Amy (2002) points out: Nordic countries are much closer to gender parity not because they  have higher quality female candidates, but because their party and election structures inherently disadvantage candidates less on the basis of gender then the structures present in the U.S.  To see real change, we’ll have to engage in a deeper conversation about structural reforms, changes to legislative practices and party rules to address the root causes of our male-dominated political arena. You can learn more about the steps we must take to see parity in our lifetime in Representation2020’s new State of Women’s Representation Report.

So while it is tempting to be encouraged about how women are faring in today’s political environment, the reality of the situation demands something different. We must celebrate the success of trailblazers like Mia Love and Elise Stefanik while still remaining unsatisfied with the consistent lack of broader progress towards parity. It’s been more than 100 years since women earned the right to vote, and if we don’t start focusing on substantive reforms to open up politics for women, we’ll be waiting longer than that for real parity in politics.

In the second part of this two part series, Kathryn Gansler explores more discouraging data that shows that we may be stuck at less than 25% women in American politics for a long time to come. ​