It is a widely-held belief in political science – and one of the core tenets of Representation 2020 – that multi-member districts help more women get elected. This argument is based on broadly observable correlations, like the fact that the 20 countries with the highest percentages of women in their national legislatures all use multi-member districts, or the fact that six of the ten U.S. states with the highest percentage of women in their state legislatures use at least some multi-member districts. It is also grounded in a sound theoretical idea: that parties will feel pressure to run an equal number of women to men if they are running a slate of candidates, and that voters are likely to vote for candidates of both genders if they have the opportunity to do so.

It is difficult to find convincing examples of this phenomenon in action, given how many outside variables can be in play in any particular election. Fortunately, New Hampshire exists as an ideal case study.

New Hampshire: A Paragon of Parity

New Hampshire is the gold standard of women’s representation in the United States. In the 2012 elections, women completed their sweep of all five major statewide elected offices: governor, both Senators, and both congressional seats. Its State House of Representatives is 33% female - not perfect gender parity by a long shot, but still good for sixth in the country.

The New Hampshire State House also happens to be the largest in the country, with 400 members. Those members are elected from districts of varying sizes, ranging from single-member districts to one 11-seat monstrosity of a district.

In order to really see the effects of multi-member districts in New Hampshire, then, we need to zoom in to some hard election data from the state’s biggest districts.

New Hampshire has nine districts with at least five seats. We’ll focus on those districts because it’s around a district magnitude of five that multi-member districts really begin to have a significant effect on women’s representation – voters start to notice when they’re confronted with a slate of five male names and zero women on their ballot.

All of these districts but one are heavily Republican. They are also elected using a winner-take-all system of election, meaning that if everyone voted on purely party lines, Republicans would win every single seat in these districts. For all that New Hampshire is a relatively independent-minded state, it still largely follows the rule of party-polarized voting that has come to dominate the United States in recent years. Republicans should have been able to sweep these districts.

But they didn’t. In five of the eight Republican multi-member districts, Democrats won at least one seat. In the 10-seat district of Rockingham-06, Democrats stole two seats away from Republicans.

Those six seats don’t matter much in the grand scheme of New Hampshire’s state legislature right now, but they are an oddity. How did Democrats win them? Why did voters in Hillsborough-37 check off the names of ten Republicans but cast their final vote for a Democrat?

The answer, it turns out, is simple: voters wanted to vote for women, and the Republican Party simply failed to nominate enough of them. Voters took matters into their own hands, choosing to vote for gender parity in the state legislature over their party preference.

Every one of the six Democrats that won a seat in a Republican district was a woman. The Republican candidates that lost out on a seat as a result were all men. That’s too powerful a trend to be coincidence. 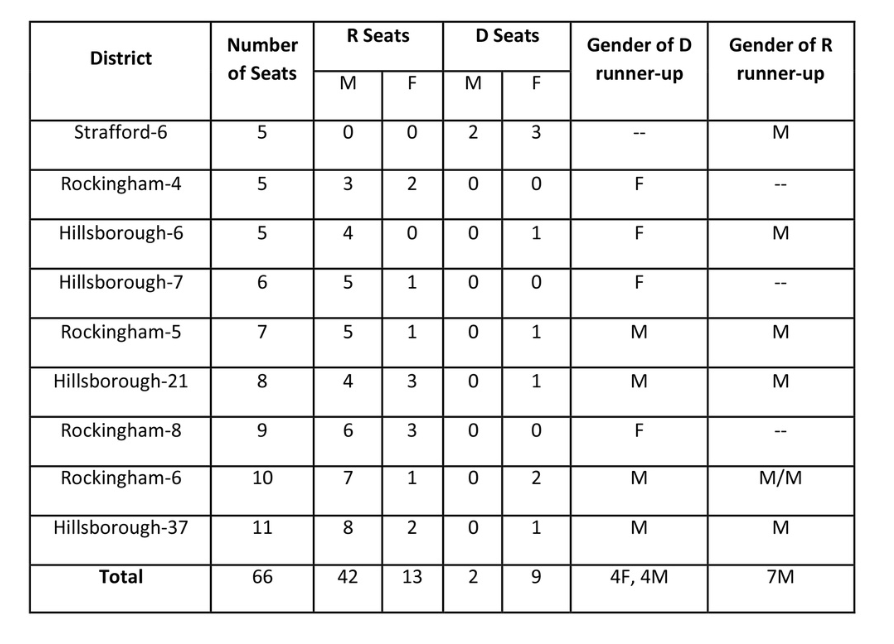 Let’s go district-by-district and see how multi-member districts affected the ability of women to get elected in each of these races.

Strafford-6: This is the only one of the districts analyzed here to be majority-Democrat. Democrats win all five seats, with three women nominated and elected. Parity is achieved.

Hillsborough-6: Here is the first example of the phenomenon of gender trumping partisanship. Republicans nominate five men for five seats. Democrats are able to win the last seat in the district by nominating a woman, Ruth Gage, who voters choose over the fifth Republican man. Another Democratic woman, Reta McGregor, comes within 100 votes of unseating Republican Calvin Pratt.

Hillsborough-7: Republicans manage to win all six seats in this district despite only running one woman. This was a very Republican district – no Democrat received more than 62% as many votes as the lowest vote-getting Republican.

Rockingham-5: Democrats steal a Republican seat after Republicans run only one women out of seven candidates. The upset Democrat winner is, of course, a woman, depriving a Republican man of the seat.

Hillsborough-21: The Republican slate in this district has an unusually high percentage of women – three out of eight. Still, that’s not good enough for the voters: they want parity, and elect a Democratic woman instead of one of the Republican men. Parity is achieved.

Rochingham-8: Republicans sweep all nine seats in the district, likely because they ran three women candidates. Even so, a Democratic woman, Susan Desmet, very nearly wins the last seat and gets the district up to parity. She loses to Republican man Patrick Bick by less than 200 votes.

Rockingham-6: Republicans should have won all ten seats in this district, but their slate of candidates includes only one woman. Democrats nominate two men and two women; the two women both win election instead of two Republican men.

Hillsborough-37: In New Hampshire’s largest district, Republicans nominate only two women. As a result, voters choose to vote for the strongest Democratic woman running, who receives more votes than two of the Republican male nominees.

Creating a System That Lets Voters Vote for Parity

The implications of these elections are inescapable. When voters in New Hampshire were given an opportunity to vote for more women – to vote for gender parity in the state legislature – they did so. In the majority of these large multi-member districts, the goal of parity was important enough for voters that they set aside their Republican party identity to vote for Democratic women.

Typically, gender is not put in the same category as race as a factor that dominates voting behavior. In most single-member races, it should not be – voters are highly unlikely to vote for a candidate for Congress of the opposite party because she is a woman, for instance, while majority-black districts typically elect black representatives. But in the multi-member districts of New Hampshire, gender has become a factor that actually does determine votes and election outcomes.

The intention of this report is not to chastise New Hampshire Republicans for nominating too few women. It should, however, demonstrate to the New Hampshire Republican Party that it is very much in their self-interest to run more. Democrats won six extra State House seats in 2012 by running women against male-dominated Republican slates. By nominating more women, Republicans would easily take back those seats, which could make the difference in determining control of an always hotly-contested legislature.

More importantly, the case studies of these elections shows the value that multi-member districts could have for women’s representation if implemented in more state legislatures and for the U.S. Congress. It cannot be assumed that the dynamics at play in these districts will develop identically in other areas of the country. New Hampshire voters, after all, have proven themselves to be more independent-minded and more interested in electing women than the average American voter.

But it is certainly plausible that similar phenomena would start happening around the country if the use of multi-member districts were more widespread. If these districts were elected using fair representation voting methods, it would be even easier for voters to vote for women, as they wouldn’t have to vote against their partisan interests in a winner-take-all district, as Republicans did in New Hampshire.

Multi-member districts allow voters to vote for gender parity, at least if the parties nominate enough women. That’s a goal that most Americans want to achieve. We should design an electoral system that lets them achieve it.