Kansas began the new year with absolutely no women in statewide executive office, something that has not happened since 1966. Insurance Commissioner, Sandy Praeger, was the last lone woman left in the  the statewide offices of Kansas, leaving a gaping hole for women’s representation once Commissioner Praeger left office this past Monday.

Kansas has been progressively getting worse in gender parity for the past two decades, perhaps signalling a need for change in the state. In 1993, the Sunflower State led the nation as the best state for gender parity with a score of 36.9 according to our Gender Parity Index. Since Kansas’s glory year, it has fallen behind other states who are making efforts to increase the number of women in elected office. Last year, Kansas ranked 14th out of the 50 states in gender parity and has now fallen to 25th in the new State of Women’s Representation Report 2015, to be release this next month.

The 11 place fall can perhaps be explained by the GOP incumbancy that made it impossible for three Democratic female candidates to win a seat at the table this past midterm election. But it is important to note that the lack of women in office is not an isolated event that has only manifested this election--Kansas has been on a steady movement away from gender parity for years as seen in Figure 1. 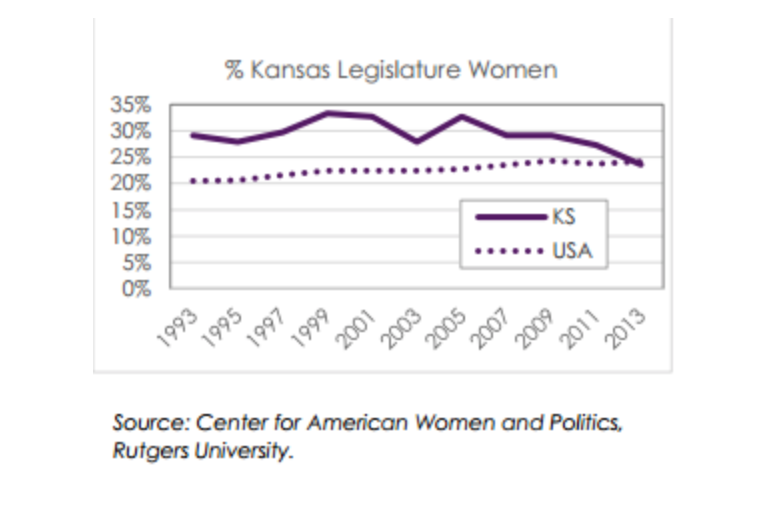 Commissioner Praeger commented on possible causes for the trend,pinpointing the “current climate of drawing a line in the sand, that doesn't sit well with a lot of women,” Praeger said.

Representation 2020 recognizes that training efforts are necessary to prepare women for the nature of working in the polarization of government. But it is too easy to assume that perhaps women are “naturally” not willing to enter into the dog-eat-dog world of politics. Instead. the nation must analyze the structure in which we recruit, elect, and run our government to have a comprehensive understanding about the barriers women face in particular when running for office.

Kansas is not the only state that needs to finds methods of improving women’s representation in statewide executive office. Five other states have men’s clubs in statewide offices:

Four of the five states listed above are among the worst in general for gender parity. While some of them are making progress, the rate is so slow that, for example, it will take Virginia an estimated 220 years to reach gender parity at their rate of improvement.

Representation 2020 suggests having proactive recruitment practices that foster more “queen-makers” instead of continuing the constant “king-maker” habits that are so pervasive behind the scenes. Additionally, incentivizing parties to include a minimum amount of women in their roster of candidates they wish to support has the possibility of speeding up state’s progress in gender parity. Finally, switching to multi-member districts that use fair representation voting systems tend to do better in women’s representation. Instead of waiting until our great-great-great-granddaughters have an equal chance of getting elected, the nation must implement the structural recommendations Representation 2020 offers so that our daughters can have an equal opportunity to win office.