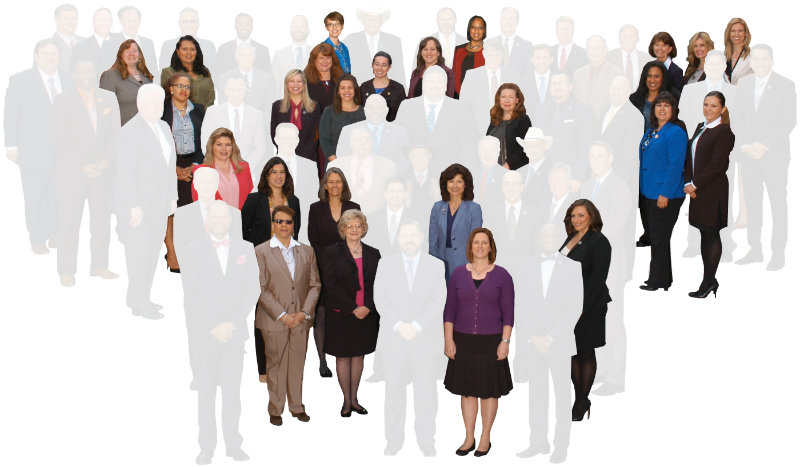 The New York Times wrote about women's representation in state legislatures and how those statistics are likely to change after the general elections in November. The piece quotes Katie Ziegler from the NCSL who rightly points out that the central reason that women remain underrepresented is because incumbents win re-election and incumbents are mostly men. While more women are projected to win this November, any that win in seats held by the opposite party are unlikely to hold on to those seats in the next election cycle - which confirms the need for reforms of our district design and voting systems:
A record number of women won Nevada’s primaries in June. And there is now a possibility for the Legislature to have more women than men, which would be a first in United States history. Of the states that have had primaries so far, at least eight more have a shot at reaching or surpassing the 50 percent mark in November.

To reach this milestone, however, a woman must win the general election in every district where at least one is running, a difficult feat. Some female candidates are running in districts favoring the other party, and many are challenging incumbents, who historically almost always win.

“The power of incumbency is so, so strong, particularly at the state level,” said Katie Ziegler, a program manager at the National Conference of State Legislatures. “It’s rare for an incumbent to lose their seat.”

Nationally, for women to be at least equally represented as men in all state legislatures, voters in November would need to elect 1,816 more women, nearly doubling the current count of female legislators in state office.

Women now make up a quarter of all state legislature seats in the United States.

​There was a fascinating story in The Guardian about the push for women on corporate boards in California - these types of intentional actions are exactly what is necessary to advance women's representation in the private and the public sectors:


In 2013, the California state senator Hannah-Beth Jackson made a certain amount of feminist history when she authored – and the legislature enacted – a first-in-the-nation resolution urging the state’s publicly held companies to appoint more women to their boards of directors.

The resolution endorsed research finding that companies with women on their boards perform better than those without, and encouraged corporations to add at least one and as many as three women to their boardrooms.

Five years later, Jackson is blunt in her assessment of the achievement.

“It was just sort of a thud,” she said. “We had virtually no success in getting any kind of positive response ... I realized that we were going to have to do more than ask politely.”

“There’s a dam in the way of progress and opportunity, and that dam is the boardroom,” Jackson said. “We feel that corporate culture starts at the top, and if women are left out of corporate boards, we lose their expertise and leadership.”

The bill has passed the California state senate and is now under consideration by the assembly. Among the companies that could be immediately affected by the changes are Skechers and Tivo, which currently have all-male boards. Facebook, Apple and Tesla would need to add at least one female board member each by 2021; Google and Uber are already compliant, with three women on their boards each.

But while Jackson is optimistic that her bill will be passed by the legislature, the measure has touched off debate over an issue that is all but a dirty word in American politics: quotas. Corporate board gender quotas may have been effectively enacted by a number of European nations, but in the US, quotas are widely derided as anathema to the principle of “meritocracy”.

The California Chamber of Commerce and a host of business groups have come out in opposition to the measure, arguing that the bill “likely violates the United States Constitution, California Constitution, and California’s Civil Rights Act” by forcing companies to discriminate against men. Jon Healey, deputy editorial page editor for the Los Angeles Times, called the proposal “social engineering at its worst” and said that Jackson “doesn’t seem to understand that selling shares of stock is just a way to finance a company, not to create a host of public-interest obligations”. Susan Fowler, a software engineer and advocate for women in technology, tweeted concern that the bill would result in the “tokenism of women”.

But for some advocates, the time has come to stop waiting for things to change on their own.

“If boards were going to achieve gender parity, they would have done it by now, and the fact that they haven’t could mean that it’s time to try something else,” said Y-Vonne Hutchinson, a founding member of the tech diversity initiative Project Include. “We know that internally driven [diversity and inclusion] initiatives have a lower rate of success. Usually it takes some external pressure, like compliance with a law, to make it work.”

There was an interesting story in the Global Banking and Finance Review about the decision by CA Technologies to promote parent leave policies to enable gender parity in the workforce - this is a terrific example of private sector innovation that ideally will spread to the public sector:

CA Technologies (NASDAQ:CA) today announced a groundbreaking policy for new parents to promote and extend gender parity across the organisation.

The Company will offer all employees globally—male and female— a minimum of 12 weeks paid leave during the first 12 months following the birth or adoption of their child. As well as supporting female employees following the birth of their child this will encourage male as well as female employees to be actively involved in the initial months of caring for their new child. This forward-thinking policy will help CA Technologies to create an even more inclusive culture and position the Company as an employer of choice both among existing employees and in attracting new talent.

“CA Technologies is delighted to announce the launch of this innovative and exciting new parent leave policy, which will enhance our existing broad range of family friendly benefits” says Gail Wilkinson, SVP People, CA Technologies. “Equality, diversity and inclusion have a vital role to play in business success and this new policy—a first for the technology industry—will help drive an even greater level of gender balance across our global business while offering a more rewarding employee experience. The technology industry has particular gender parity challenges and we are confident that this new parent policy will also play a wider leadership role in promoting a more sustainable, prosperous, and inclusive society.”

In New Zealand it's the public sector that is attempting to influence the private sector according to this story in Stuff:

The Government has set a compulsory target that would have women make up half of the directors on all state sector boards and commmittees by 2021.

The Minister for Women Julie Anne Genter said even representation was something the Government wanted to lead by example on.

"By making sure the public sector has equal representation at the top, we hope to inspire the private sector to lift its game."

More than 2,600 appointments are made to state sector boards every year including state owned enterprises, conservation boards and community trusts.

According to the Government's the latest stocktake of gender on state sector boards and committees, women's participation last year reached a record high of 45.7 per cent.

But the percentage of females on the NZX's top 50 boards at the end of last year was just 14 per cent. Women made up 19 per cent of executives and senior officers..

Further, a Grant Thornton survey of private and public companies in New Zealand this year showed that the number of women on senior teams had slipped from 31 per cent in 2004 to 18 per cent in 2018.

​Genter said the Government wanted to "issue a challenge" to the private sector to change their current workplace cultures and support women into leadership roles.

"Not just because that's the fair thing to do, but also because diversity helps organisations function more effectively.

​​
RepresentWomen and a number of other allies are partnering to sponsor the Courage to Run 5K on September 16th. Here is a note from the coordinator extraordinaire, Frieda Edgette, who envisions 'runs' happening all over the country on that same day. Let me know if you have any questions or contact Frieda directly at [email protected]:
###
A quick update to you all that the Virtual Courage to Run 5K option is now LIVE on the website. When you click through to the website, you'll see there are now DC and "Anywhere" options. Run details now reflect both, too.

The Virtual Courage to Run 5K allows people across the country to claim their courage from anywhere and at any time on September 16, and to be part of the growing community (bib, t-shirt and medal included!). If you have local chapters or affiliates or alumni, please do encourage them to set-up a [Your City/Location} Virtual Courage to Run 5K. Below is a template letter and attached are the general materials to get folks started. We are here to lend a hand, too

I have an exciting opportunity for you to further elevate the "Year of the Woman" and [YOUR ORG] in your community: to set-up a Virtual Courage to Run 5K! As an [alum, affiliate, chapter, partner] dedicated to women's political leadership, you came to mind as the person to make this happen.

[YOUR ORG] is partnering up for the Courage to Run 5K, the nation's first nonpartisan run and walk celebrating the rising wave of women lacing up, getting civically active and running for office. Importantly, it also elevates the needed mindset, endurance and heartfelt vision to be healthy and lead effectively in civic life today. We’re not just walking the talk, we’re running it. Net proceeds are being distributed back into the community, including [YOUR ORG].


The Virtual Courage to Run 5K allows people across the country to claim their courage from anywhere and at any time on September 16, and to be part of the growing community (bib, t-shirt and medal included!). It allows political players and civic believers to choose your route, set your pace, time yourself and post your experience on social. Some virtuals are choosing meet-up locations. Others are hitting the treadmill at the gym. Still others are doing a 5K door-to-door canvas.

Finally, I so hope you can participate in an important event on Women's Equality Weekend in Rochester, NY where activists and advocates will gather to discuss the past, present, and future of women's equality in the United States. It's going to be a great event so I hope that you will come be part of it! Register here!

​Have a great weekend!
Cynthia
P.S. MEXICO BECAME THE THIRD NATION TO REACH GENDER PARITY THIS WEEK! Read more about the national elections and the election of the first woman mayor of Mexico City in this blog by RepresentWomen intern Jamie Solomon!

In both the United States and Mexico, 2018 has been called “the year of the woman,” an inspiring phrase based on the surges of female political activism across the globe. Despite using the same battle cry, the electoral landscapes for women in the two countries are drastically different: according to the Inter-Parliamentary Union’s measurement of women’s representation in parliament, the US ranks 102rd internationally, while Mexico ranks a striking 9th. Such an incredible gap cannot be simply explained by only one factor; however, Mexico’s mandatory gender quotas for political parties, along with a combination of proportional and winner-take-all districts, are indelibly crucial components, offering insightful lessons for visibly urgent change in the US.