Querida hermanas,
Mexico now ranks 4th for women's representation worldwide! Women in Mexico, of course, are pretty much the same as women in the US but gender quotas and proportional voting are fueling women's electoral success there. RepresentWomen intern Jamie Solomon wrote about women's representation in Mexico last week and political scientists Jennifer Piscopo and Magda Hinojosa wrote an excellent piece for The Washington Post this week:

While observers discuss leftist Andrés Manuel López Obrador’s victory in Mexico’s presidential election, complete with majorities in both chambers of congress and control of nearly half the governorships and state legislatures up for election, another historic earthquake has been overlooked: gender parity in congress.

When the new Mexican congress sits on Dec. 1, women will make up 49 percent of the lower house and 51 percent of the senate. Mexico will rank fourth in the world for women’s legislative representation. And it will be the only country with an elected senate that is majority female.

Across the board, Mexican women won big in the July 1 elections. The second most important political position in the country (mayor of Mexico City) also went to a woman. At the subnational level, women will make up 50 percent of most state legislatures.

But the forces bringing AMLO — as López Obrador is widely known — and women into office are different. AMLO’s election speaks to Mexicans’ desire for change. Women’s wins are the result of 15 years of electoral reforms, in which Mexico incrementally refined the affirmative action rules that compel political parties to nominate women.

How did Mexico do it? And will women help AMLO transform Mexico?

Gender quotas for legislatures are a global trend

More than 75 countries have some form of gender quota for the legislature. Most commonly, gender quotas are imposed via candidate quotas — requirements that political parties nominate certain percentages of women. All Latin American countries except Guatemala and Venezuela have such laws.

Gender quotas work because parties control access to the ballot. Unlike in the United States, candidates in most parts of the world cannot simply run on their own initiative. Rather, parties select and register their candidates. Quota laws essentially regulate parties’ candidate selection processes.

Not all gender quotas work equally well. Brazil has a 30 percent candidate quota for women, but fewer than 15 percent of those actually elected are women. It is tempting to blame voters because Brazil has a system in which voters pick their preferred candidates off the party’s electoral slate. But as research shows, the real problem is that parties run women in losing districts, give women fewer resources for their campaigns and generally fail to support female candidates.

Mexico, by contrast, imposed strict rules on how parties could fill the quota.

Getting to parity in Mexico

Mexico started with a mandatory 30 percent quota for female candidates in the 2003 elections and raised the threshold to 40 percent for the 2009 elections. But parties found many workarounds. They ran women in losing districts and forged deals so that women would resign once elected, yielding their seats to male alternates. A loophole exempted parties that held primaries from having to fill the quota — so parties called almost any internal selection process a “primary.”

But these maneuvers resulted in huge scandals. By 2009, prominent female politicians from the left and right pushed back, forming a cross-party coalition and pressing officials of the National Electoral Institute to rewrite the quota rules.

They also took the parties to court. In 2011, women won a landmark case requiring parties to respect the quota at all costs. The court struck down both the primary exemption and parties’ ability to pair candidates with alternates of the other sex.

In 2014, Mexico amended its constitution to require gender parity for candidacies for the federal and state legislatures. The new electoral code stipulated that parties could not send female candidates exclusively to losing districts. And so we come to 2018’s results.

Before Mexico’s mandatory 30 percent quota, women held just 17 percent of seats in the lower house — a proportion not far from the 20 percent of seats women hold today in the U.S. House of Representatives. Now Mexico leaves the United States — and most of Latin America — far behind on women’s representation.

But that has not proved accurate. Research shows that women elected under quotas have the same credentials as men or are better qualified. Once in congress, they are as productive as men and have fewer absences.

Second, quotas can work in districts represented by single members. Mexico elects its lower house via a mixed system, with 300 seats allocated in single-member districts. Parity requires that parties nominate women to 150 districts. The National Electoral Institute looks for parity not just across districts, but across district type: Are nominations distributed 50-50 across winning, swing and losing districts?

Third, neither party ideology nor parties’ goodwill explains when parties nominate women. Our research shows no variation across left and right parties in nominating women, no matter the quota rules in place.

Our research shows that women in the Mexican congress care more than men about rights, equality and social issues. Women from parties on the right are more progressive than men from  those parties. And women are just as effective as men at passing legislation. These trends matter as AMLO looks to demilitarize the drug war and to confront widespread poverty and inequality.

AMLO also announced a gender parity cabinet, with women in top posts: energy, labor and social welfare, and the economy. He has picked a woman to be minister of government — the most influential position in the administration. 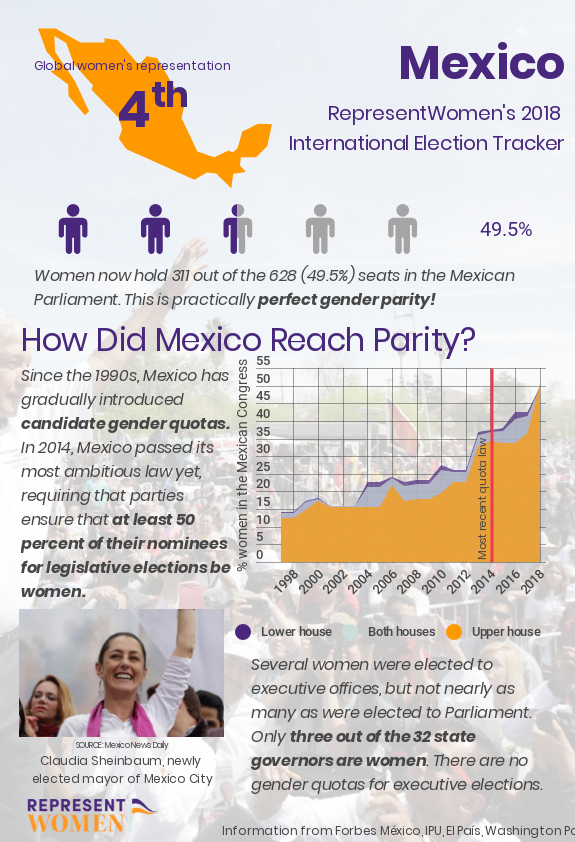 RepresentWomen intern Barbara Turnbull saw this very interesting piece about a coalition of elected officials in Illinois who have launched an effort to address barriers to women in politics.
Here is a link to the newly-formed Anti-Harrassment, Equality, and Access Panel website and a few more details about their plan:

Figuring out how to intentionally get more women to run for office in Illinois is the focus of the new, nonpartisan Anti-Harassment, Equality and Access Panel founded by Mendoza, state Sen. Melinda Bush and state Rep. Carol Ammons. Together, the group aims to help eliminate harassment in the workplace, including within government.

To do that, the panel is hosting listening sessions across the state for women who have worked on any party’s political campaign in Illinois. Panel members hope to offer a safe space for participants to discuss their experiences, and notes from the sessions will be used to create a list of recommendations for all parties to follow. The recommendations are set to be released in mid-August.

“So the work of this panel is going to be forward-facing,” said Mendoza.

So far, three sessions have been held, including this past Sunday in Chicago and Rockford.

“It was a great cross-section,” said lawyer Tina Tchen, who is serving as legal counsel for the panel. “I think we had women who had been active in a political campaign, some women who had not but participated in some way in the political process, some people who had worked for various elected officials – both Republican and Democrats, city and suburb.”

Tchen, a partner with Buckley Sandler LLP and co-founder of the Time’s Up Legal Defense Fund, says another problem in addressing workplace harassment is the law.

“There’s a whole range of behaviors that is not covered by the law, and it really has to be about what kind of culture you want to have in your workplace,” Tchen said. “And I think that holds for campaigns – what kind of culture do the candidates want to say he or she is promoting for the people who are working for them and volunteering?”

According to the IISD, the annual report of the International Gender Champions network was presented at the UN on July 5, 2018. The report highlights 205 champions from over 60 nations:

5 July 2018: The annual report of the International Gender Champions network was presented at the UN, highlighting that 205 champions from over 60 countries have made 600 commitments to advance gender equality, since the network was launched in 2015.

The Champions currently include the UN Secretary-General, the heads of the UN Offices at Geneva (Switzerland), Vienna (Austria) and Nairobi (Kenya), the heads of many UN funds, programmes and organizations, non-governmental organizations (NGOs), academic institutions, and permanent representatives of UN Member States.

The report titled, ‘International Gender Champions 2017 Annual Report,’ describes progress on commitments related to good governance, organizational culture, leadership and accountability, meetings, conferences and delegations, selection and recruitment, and work-life balance. Other highlights showcased in the report include the addition of 112 new Champions, and the expansion of network hubs to New York, US, and Vienna, with “soft launches” in Nairobi, and Bonn and Berlin, Germany.

All International Gender Champions sign the Panel Parity Pledge to not sit on single-sex panels. The report states that it is now considered “unacceptable to have single-sex panels on any topic.” According to the network’s annual survey, parity was achieved in 44% of the 328 panels reported on, in comparison with 18% in 2016, and champions had to intervene to improve panel composition in only 11% of cases, compared to 42% in 2016.

Despite progress, the report cautions that the world “will achieve gender parity only by 2234,” based on the current rate of change, according to findings by the World Economic Forum (WEF). The report concludes that achieving SDG 5 (gender equality) “is not simply a Goal in itself, it is a precondition for all other Goals,” and urges everyone to champion gender equality in their work, schools, homes and lives.

Addressing the report presentation event, UN General Assembly (UNGA) President Miroslav Lajcak reflected on examples of progress on gender equality and women’s empowerment, including the gender-balanced team within the UNGA President’s office and greater gender parity throughout the UNGA, with a higher number of women co-chairs and co-facilitators and gender-balanced panels. Lajcak shared findings from his morning dialogue on gender mainstreaming, including that only one woman has ever served as Chair of the UNGA’s Main Committees, and challenges related to the limited number of women permanent representatives to the UN. To promote women’s participation in the UNGA, Lajcak suggested Member States: consider applying voluntary quotas to their delegations; present more women candidates for UNGA leadership positions; and increase emphasis on work-life balance measures to address challenges that hinder women’s participation.

Finally, RepresentWomen interns have been writing great content and making terrific graphics all summer - here is their latest on women members of the SCOTUS.

Have a great weekend everyone,
Cynthia
P.S. And, if you want to be in the room where the conversation about winning gender parity happens check out the Seneca Falls Revisited Conference & Retreat in Rochester, NY and join us if you can! Next week will mark the 170th anniversary of the Seneca Falls Convention so it's extra timely to be continuing the conversation about women's equality that began so many years ago!