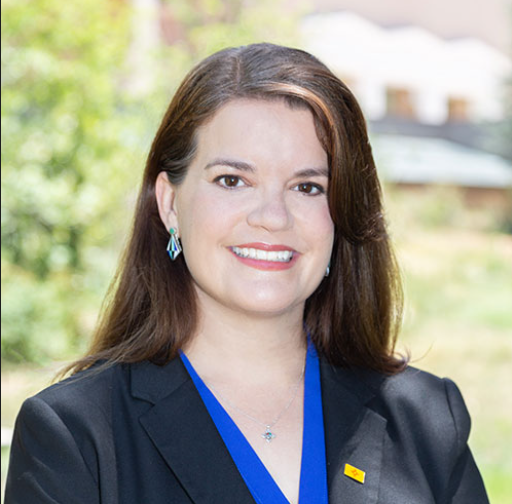 Maggie Toulouse Oliver is New Mexico’s 26th Secretary of State. She has served the people of New Mexico in this role since first being elected in 2016. She was first appointed to public office in 2007 when she became County Clerk in New Mexico’s largest county, Bernalillo County. Elected to her first full term in 2008, Secretary Toulouse Oliver served 2 1/2 terms as County Clerk. Overseeing elections in the state’s largest county gave Secretary Toulouse Oliver detailed, on-the-ground expertise in election administration that has helped to guide her current work overseeing elections statewide.

Secretary Toulouse Oliver has been involved in politics and public policy for over two decades and has made public service the focus of her career. Her work has focused on increasing voter access, running efficient, secure, and fair elections, and bringing more transparency and increased ethical standards to the government.

Secretary Toulouse Oliver worked her way through college and graduate school. While earning her Bachelor’s and Master’s degrees in Political Science from the University of New Mexico, Secretary Toulouse Oliver worked for U.S. Senator Jeff Bingaman in his DC Office and on his re-election campaign in 2000. She also gained activism and organizing experience working with Native American tribes in New Mexico, fighting for reproductive justice, and protecting the Environment as the NM State Director for the League of Conservation Voters.

In addition to her elected position, Secretary Toulouse Oliver is the immediate Past President of the National Association of Secretaries of State (NASS), and has previously served NASS as President, President-Elect, Treasurer, and chair of the elections committee. She serves as a board member of New Mexico’s Public Employees Retirement Association (PERA), the New Mexico Martin Luther King, Jr. Commission, and the state Commission on Records and Archives. She is currently a member of the University of Southern California Annenberg Center’s Voter Communication task force, and an advisory board member for the Election Official Legal Defense Network co-founded by national election law experts Benjamin Ginsburg and Bob Bauer.

She is also a Ph.D. Student in Political Science at the University of New Mexico and is a W.K. Kellogg Foundation Community Leadership Network Fellowship alumna. Most importantly, she is the proud mother of two sons, Christian and Max.