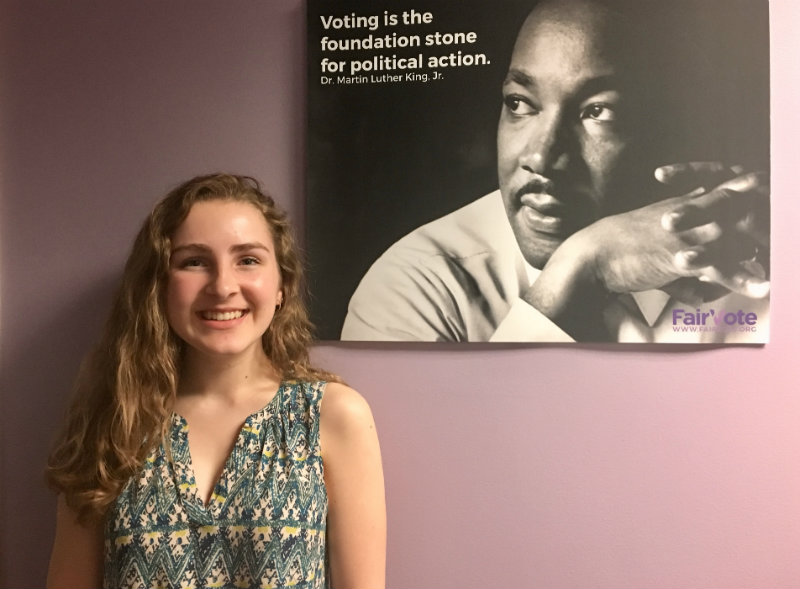 Four cities in the Bay Area—San Francisco, Oakland, Berkeley, and San Leandro—have made the switch to an electoral system called Ranked Choice Voting (RCV). RCV is a voting system that allows voters to rank candidates as their first, second, third choice and so on. If no candidate has a majority when votes are counted, the candidate with the fewest number of votes is eliminated, and ballots that have those candidates marked as their first choice are counted towards the candidate they selected as their second choice.

This process results in elections that are fairer and better represent voters’ preferences. By encouraging cooperation and civility among candidates who must take care not to alienate voters who could form their broader base, RCV discourages the divisive attacks and mud-slinging that dominate many of our elections today.

In the four Bay Area cities that have adopted RCV, women enjoy much greater representation on city councils than in the rest of the country. According to research conducted by the City Mayors Foundation, in the 105 largest US cities, women hold only 32.2% of city council seats.[2] In Oakland, women make up 69% of the city council. Of the nine women on the council of thirteen, four are women of color and one is the city’s first openly lesbian city councilmember. Mayor Libby Schaaf has been in office since January 2015.[3] In San Leandro, 43% of the council is female, and both the mayor and vice mayor are female.[4] In Berkeley, RCV has helped to elect a city council that is 70% women. On the city’s Rent Stabilization Board, an elected branch of their city council, four of the nine members are female and three of the four are women of color.[5]

San Francisco has been using RCV since 2004 to elect eighteen local offices.[6] As of 2018, 50% of San Francisco’s city council is female, and two thirds of the women on the council are women of color.[7] In the recent San Francisco mayoral election--a race that promised to be historic regardless of the result--London Breed, Mark Leno, and Jane Kim were all strong contenders. RCV provided like-minded voters the opportunity to rank the candidates in order of preference. Leno and Kim were aligned ideologically so they decided to work together to encourage their base to vote for the other candidate as their number two choice. Their strategy worked—Leno won the race due to the broad base of support he garnered through the support of Kim’s followers.

In Bay Area elections, RCV has proved to be incredibly effective in electing leaders who represent the interests of a majority of voters. RCV gives people a voice, and when people feel they have a voice, they are more likely to show up at the polls, get involved, and even run for office themselves. As a result of RCV, more people of diverse backgrounds and perspectives have become involved in politics. Through their cooperation and drive, these office-holders elected under RCV will move their constituencies toward the future with civility, passion, and care. As Jane Kim said in a statement on her Facebook page this Wednesday:

"I still feel like we won-- because San Francisco won. RCV, a system progressives fought for and implemented in 2004, allowed multiple candidates to run, put forward their vision and agenda and have a robust discussion about the future of our City.While I would like to be the individual putting forward a bold and progressive agenda for our City … I know a Mayor Mark Leno administration will do this work as well … We built a true coalition and I am proud of that. No single person did this. We did.

[1]The Impact of Ranked Choice Voting on Representation, p. 21 http://www.representwomen.org/our_research

[6] The Impact of Ranked Choice Voting on Representation, p. 11 http://www.representwomen.org/our_research