I hope you've had a great week! The primaries are now officially over, which means as of today there are just 38 days until the midterm election on November 8th. Our team is excited to track the women candidates for this cycle as we go into the general election. Now seeing the number of women who made it through the primaries and that many records were not broken this year like they were in the last 4 years, we are reminded of the need for better reforms to our electoral system to help women not just run for office, but to actually win these elections. 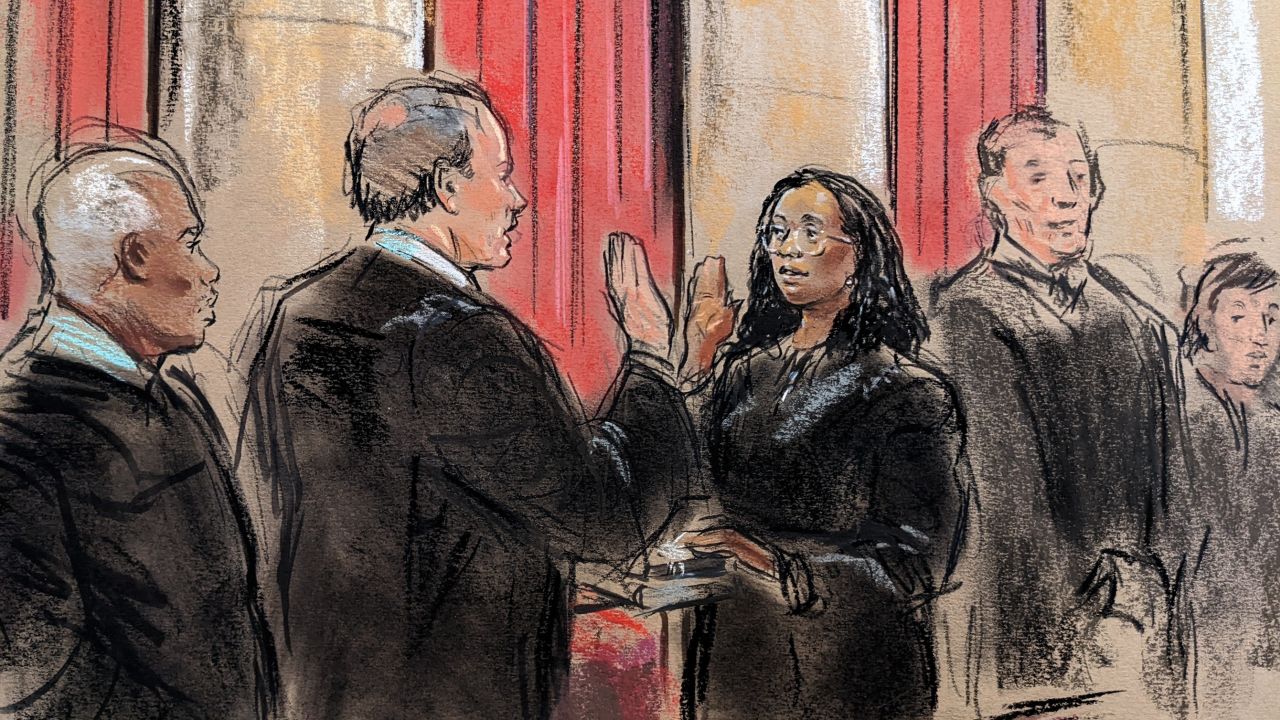 At a special ceremony outside of the Supreme Court, Justice Jackson took the judicial oath:

[The ceremony was] attended by President Joe Biden as well as legal luminaries from across Washington who gathered to celebrate the first time a Black woman has taken her seat on the highest court in the land...

The investiture was purely ceremonial, as Jackson has been on the job since June and already cast votes on emergency applications. But she has yet to sit for oral arguments, and Friday marked her debut in the regal chamber that will now be her professional home for the next few decades.

The upcoming term will feature cases where race plays a dominant role, including a challenge to college affirmative action plans as well as a dispute concerning the scope of a key section of the Voting Rights Act that prohibits voting practices or procedures that discriminate on the basis of race.

Jackson, the nation’s first Black female justice, will navigate those issues and others during her first term. Five months ago, she stood on the South Lawn of the White House after her confirmation and spoke about the “gifts my ancestors gave.” Quoting the poet Dr. Maya Angelou, Jackson added, “I am the dream and the hope of a slave.”

As of January 2022, President Biden has 42 confirmed federal judges with 78.6% of them being women. His predecessors confirmed women 42% (Obama) and 24% (Trump) of the time. In April 2022, Judge Ketanji Brown Jackson was the first African-American woman confirmed to the Federal Supreme Court. Previously, Associate Justice Sonia Sotomayor was the first and only woman of color to sit on the Supreme Court of the US. 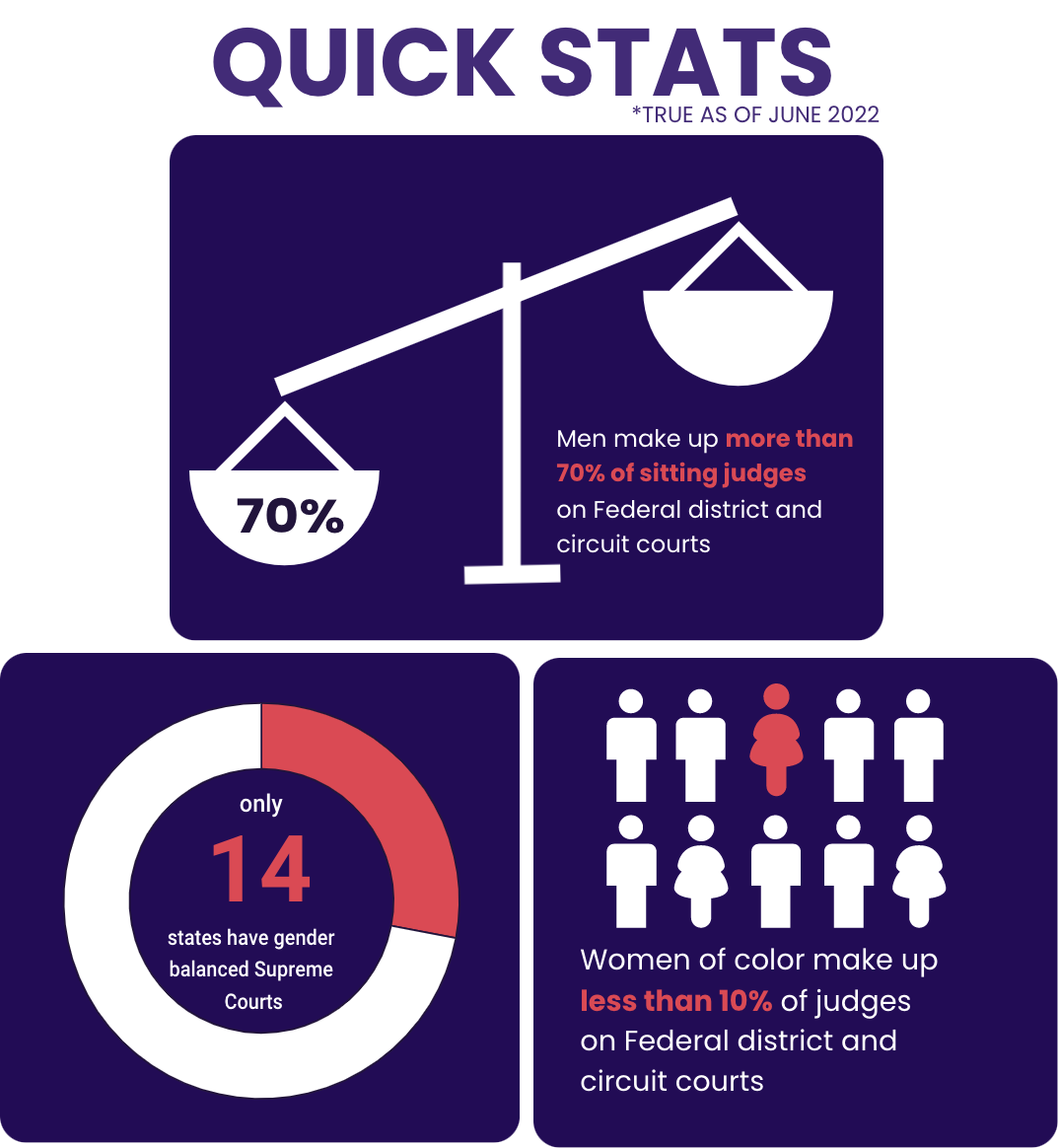 More information on women's representation in the judiciary can be found on our website.

Protests over the death of Masha Amini in Iran have not ceased, and women are at the forefront 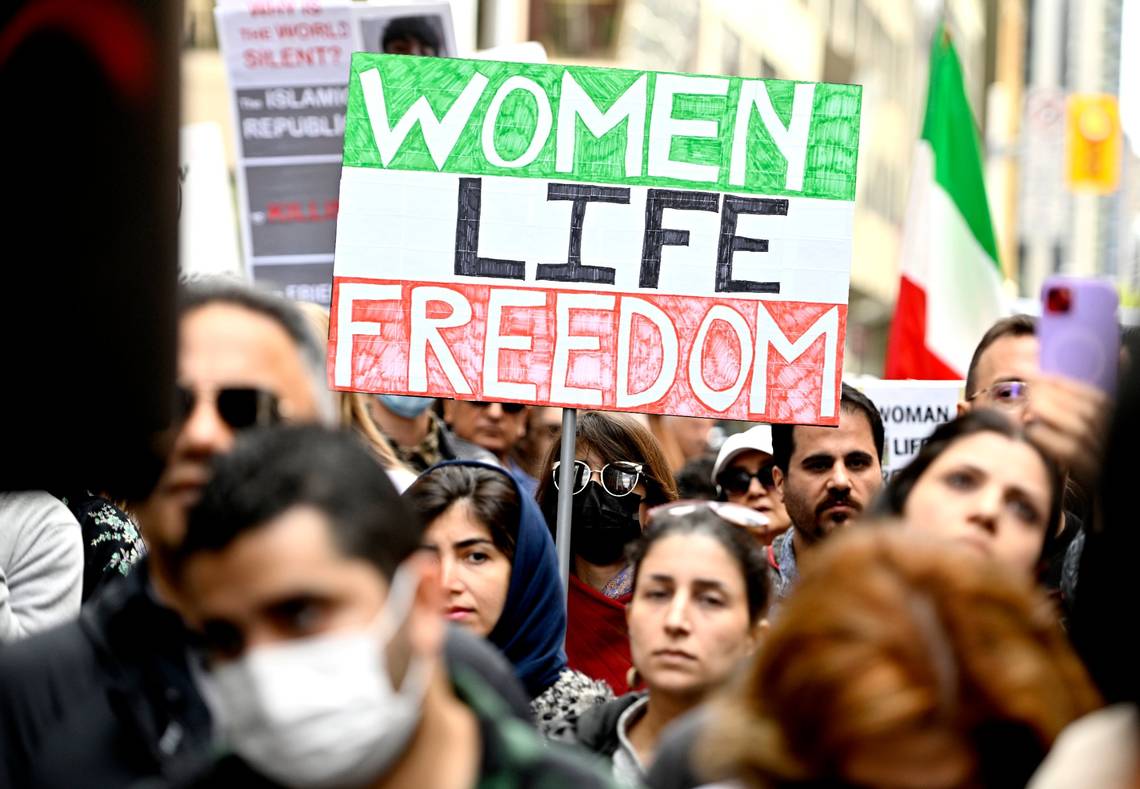 Members of the Iranian community and their supporters rally Sunday in Ottawa, the Canadian capital, in solidarity with protesters in Iran, after 22-year-old Mahsa Amini died in police custody for allegedly improperly wearing a hijab. (Justin Tang/The Canadian Press via AP)

Research Associate Steph Scaglia found this article from Democracy Now on the protests taking place in Iran. Strict dress codes for women have been in place since 1979. However, women across the globe are demanding justice for the wrongful murder of Mahsa Amini for allegedly violating this code:

These movements right now are absolutely led by women, but as have all of the previous movements in Iran. Women have always sort of played a central role within movement spaces in Iran, both before and after the revolution. And so what we’re seeing now is actually the natural culmination not only of women continuously taking up leadership within systems change in Iran, but also decades of state repression against women, and particularly focused on women’s bodies in public spaces.

But what is especially unique about this moment right now is that not only are young women — and we’re seeing this for the first time — their bravery is really, really energizing and exciting and inspiring — really on the frontlines, just being faced with all types of different government repression, from internet censorship to live ammunition to plastic bullets, and also these sets of protests have a bit of a more intersectional approach to them.

The central demand that women are chanting is for “Women! Life! Freedom!” which originally is a Kurdish slogan, actually, and has now been translated into Farsi and popularized across the country. And we see in the streets workers are coming out alongside students, Kurdish women, non-Kurdish women. And we see a lot of sort of a greater — a greater amount of Iranians from across class background coming together to demand both justice for Mahsa Amin, the abolition of the Gasht-e-Ershad, or the so-called morality police, and all of the systems that uphold it, and the state, as well.

These protests have been followed by "cut[ting] access to the Internet, cellular networks, Instagram and WhatsApp across much of the country." 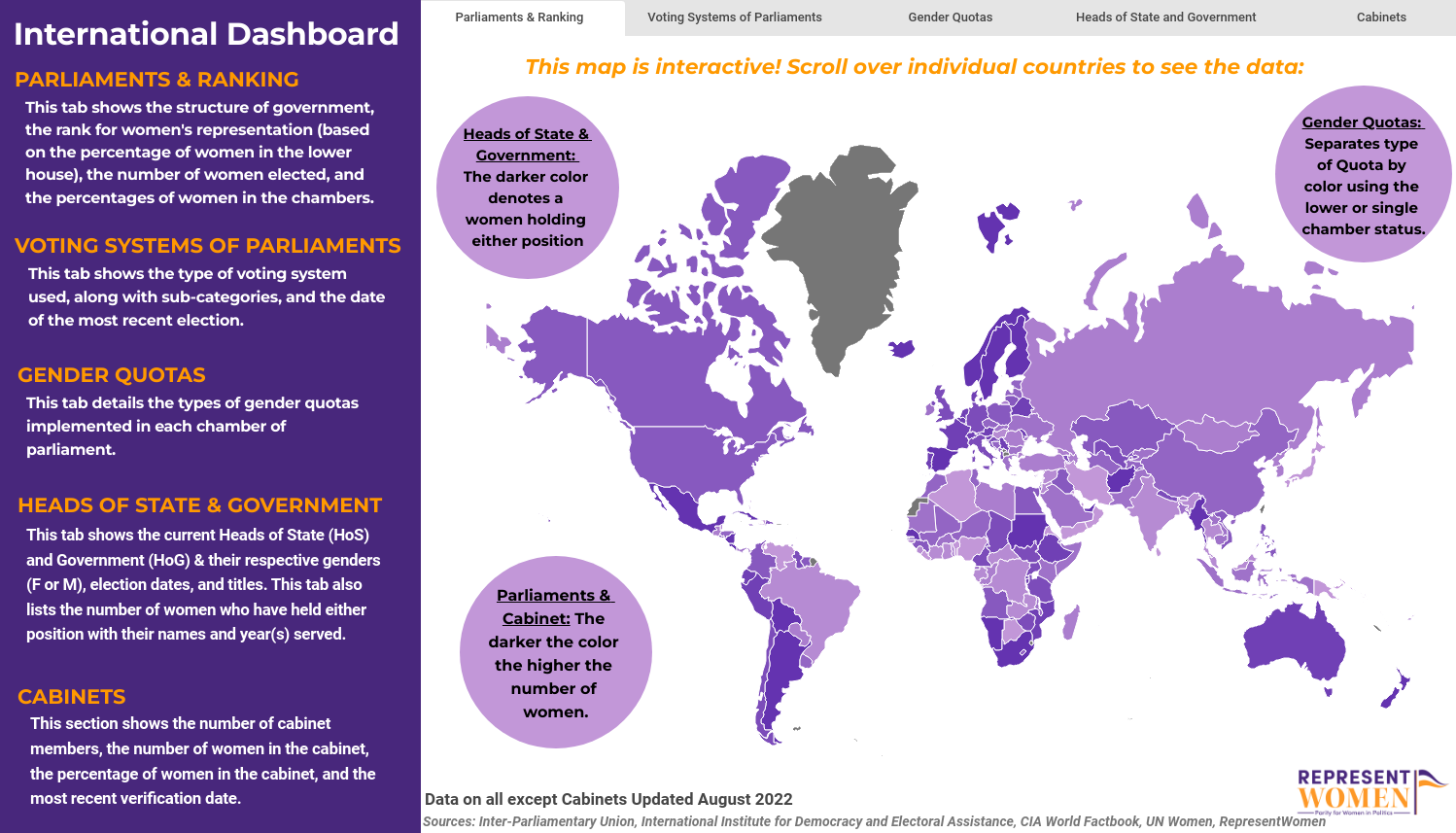 Steph also found an interesting article on how voters in areas of England and Wales who are traditionally supportive of the Labour party, were found to support a shift to a proportional representation electoral system: 47% supported the adoption of PR, and only 12% wanted to keep the current system of "first past the post."

But, Keir Starmer, the leader of the Labour party, "set himself against the change, saying it was "not a priority" and ruling out a post-election deal to bring in a new voting system."

“The whole country wants to ditch our outdated voting system, and the ‘red wall’ is no different," said Klina Jordan, chief executive of Make Votes Matter, who commissioned the poll.

"It’s obvious to the voters that a system which ignores millions of us isn’t up to scratch, and it’s time for Parliament to listen.”

In the countries that already have proportional representation, women tend to fair much better in elections:

Women are twice as likely to be elected in [those] countries ... than they are in a winner-take-all system. Across the 78 countries that use proportional representation, women make up 28% of legislative bodies on average, compared to 25% in the 38 countries that used a mixed system. This percentage under proportional representation is also higher than the American national average of 25% of the legislators.

RepresentWomen's International Dashboard (included above) shows how women fair globally. Head to our website to view the interactive version.

The city of Corvallis, Oregon will use RCV come November 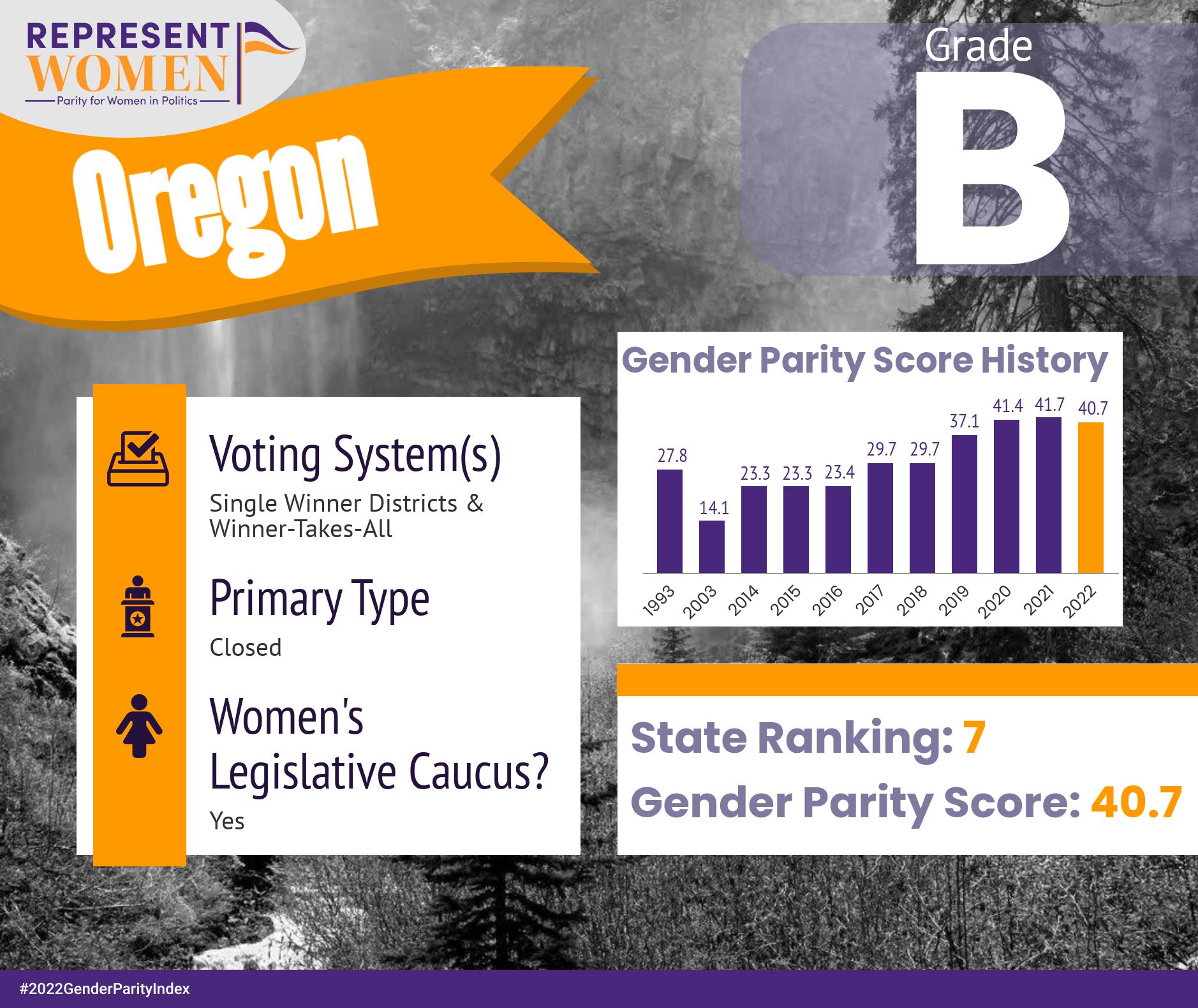 Corvallis voters may be somewhat familiar with the system, as it was used in a pair of Benton County commissioner’s races two years ago. Earlier this year the Corvallis City Council approved the use of Ranked Choice Voting in races for mayor or city council.

Supporters of the voting method say it’s the first time in the modern era that a city in Oregon will choose a mayor this way, though Portland used a similar system for a few years in the early 20th century. Some states have used Ranked Choice voting to select a governor or members of Congress.

An effort to enact Ranked Choice Voting more broadly in Oregon failed to gain the signatures needed to appear on this year's ballot, but backers of that effort said they will press lawmakers to take up the issue during the 2023 legislative session.

A record number of women running for governor this year 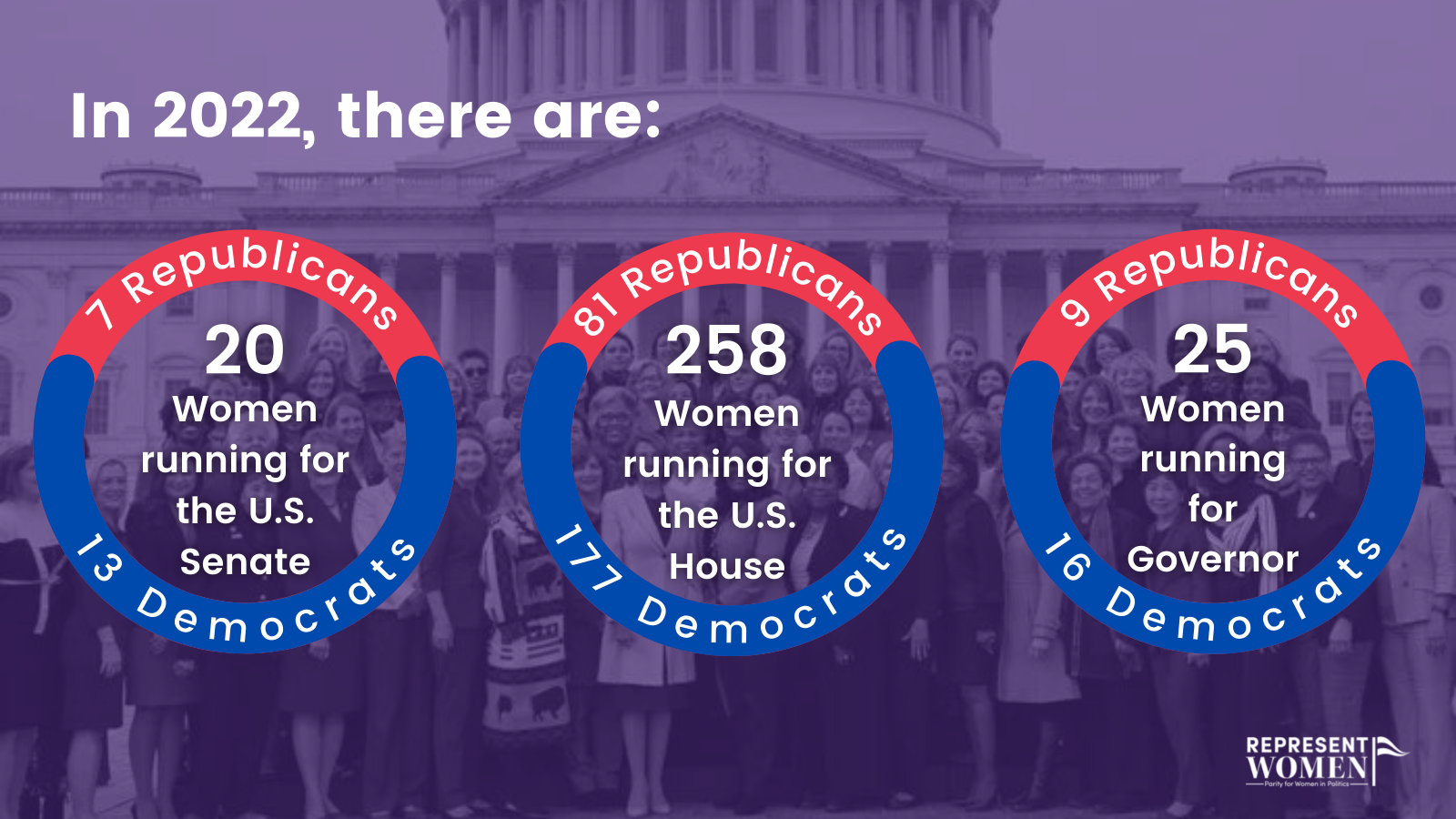 Earlier this week, CAWP provided an in-depth analysis of the women nominees for the 2022 elections. 2018 and 2020 were notable "record-breaking" years for women running for Congress. This year, while this was not the case, the momentum has not completely stopped:

...a record number of women are nominees for governor and state legislatures, while new records will not be set for women nominees for the U.S. House or the U.S. Senate in 2022...

As of 2022, 19 states have never had a woman governor. Among the nominees for governor are women who could become the first women elected as governor in Arkansas, Colorado, Georgia, Massachusetts, and New York. 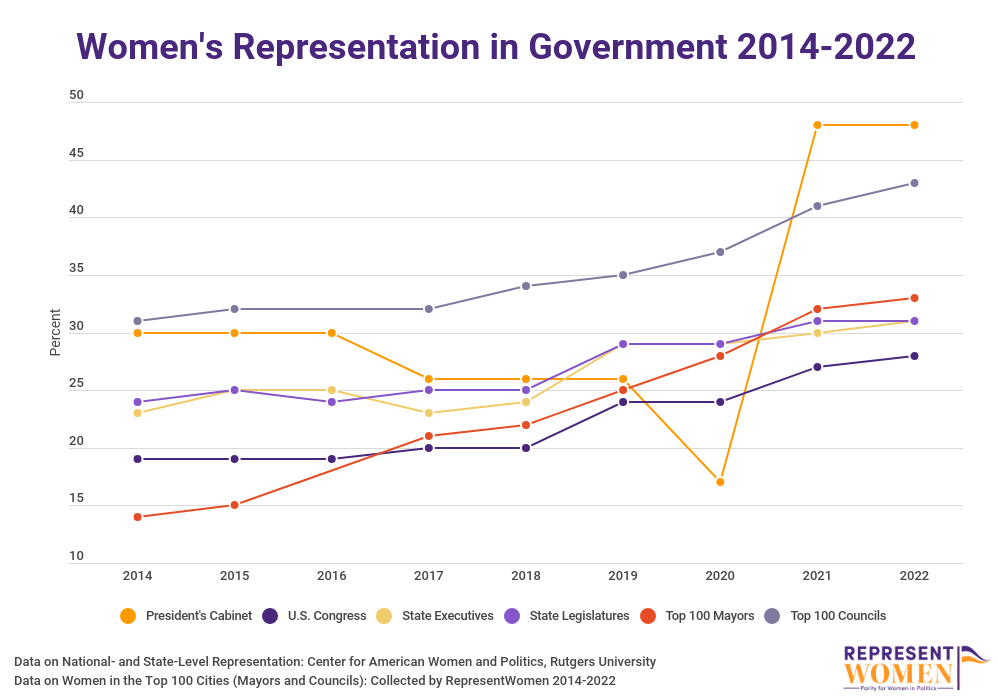 So what might explain the continued surge of women candidates, despite the slight drop off in numbers for Congress? Alissa provided this piece from the Washington Post that gives one explanation to what we've been seeing over the last few years:

When Trump was first elected, few analysts would have predicted that one legacy of his presidency would be a significant rise in the representation of women within both major parties. But change in the American two-party system often follows this back-and-forth pattern. Trump’s ascendance to the top of the GOP provoked a women-led opposition movement among Democrats, which in turn inspired a counter-response by Republican leaders who concluded that diversifying their own candidate ranks would prevent them from suffering a competitive disadvantage.

Both parties evolve as they react to developments on the other side as well as their own — just as Trump’s nomination itself represented a passionate Republican backlash against the presidency of Barack Obama.

Of course, it’s too soon to tell if the growth in female candidates will endure. But there’s one good reason to expect that it may continue for at least one more election: The Supreme Court’s June decision reversing Roe v. Wade was announced too late to affect the current field of candidates, since filing deadlines had already passed in nearly every state. But if Democratic anger at the Dobbs ruling fuels another upsurge of women running for office two years from now, Republicans could calculate that the best strategic response would be a further investment in recruiting their own slate of female nominees. When combined with Trump’s potential return to the electoral arena, that’s a formula for yet another Year of the Woman in 2024. 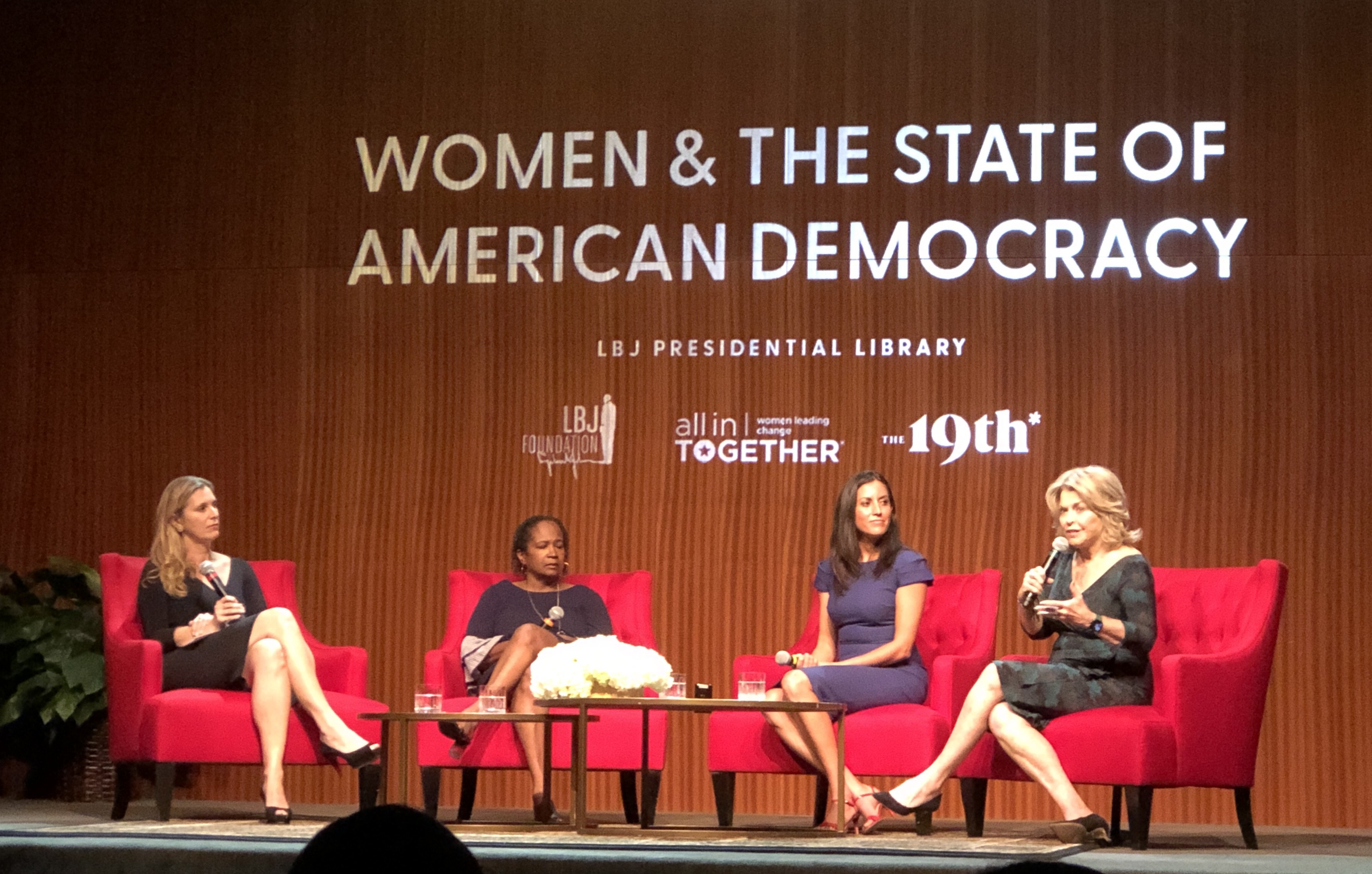 This week, I am in Austin, Texas for the Women and the Future of Democracy Summit hosted by our allies All in Together and 19th News! Our Development Director Nicole Bailey and I had an amazing time sharing RepresentWomen's work to identify both the barriers women candidates face, along with the structural reforms we can implement to build women's political power and a healthier democracy. 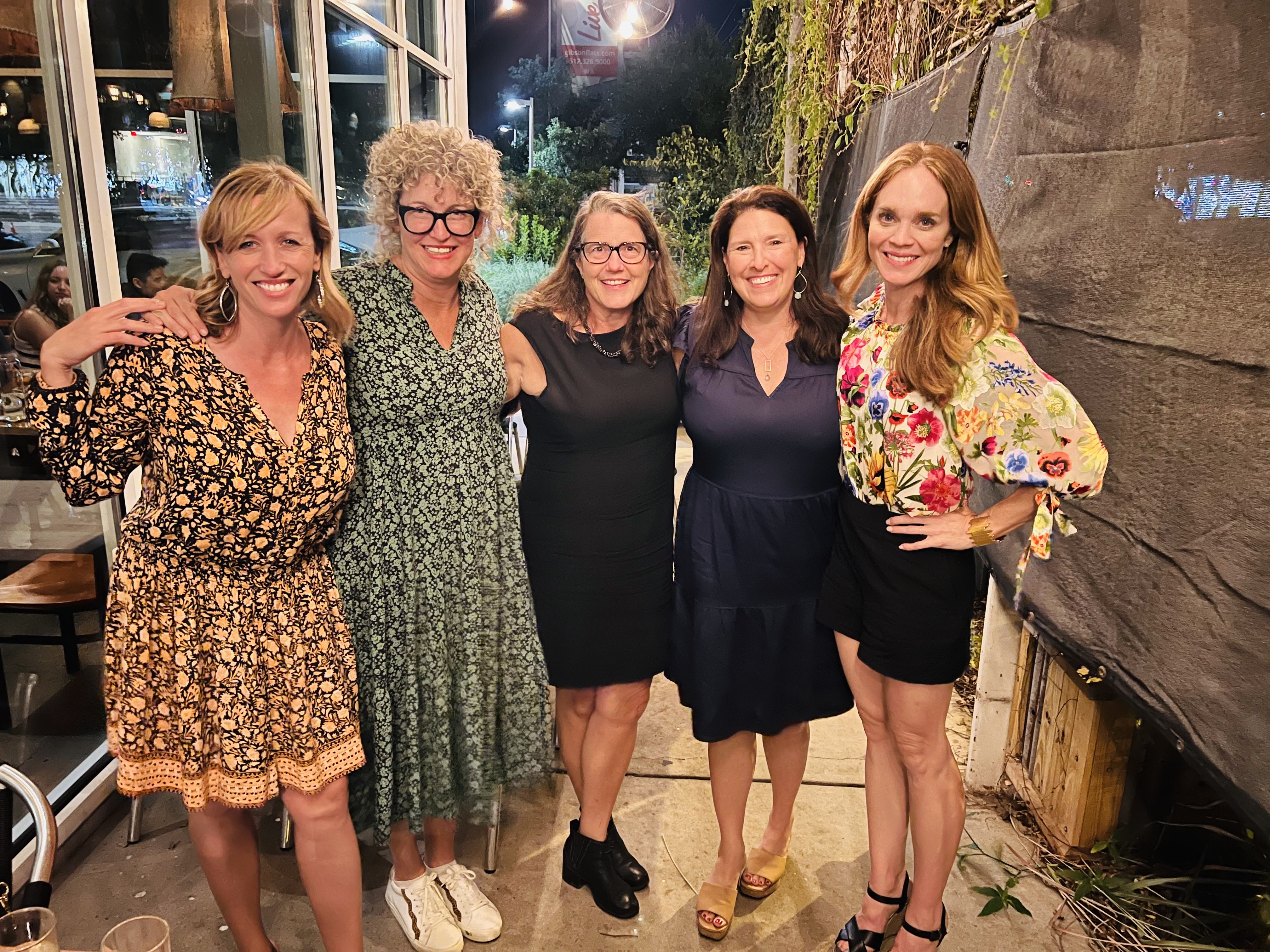 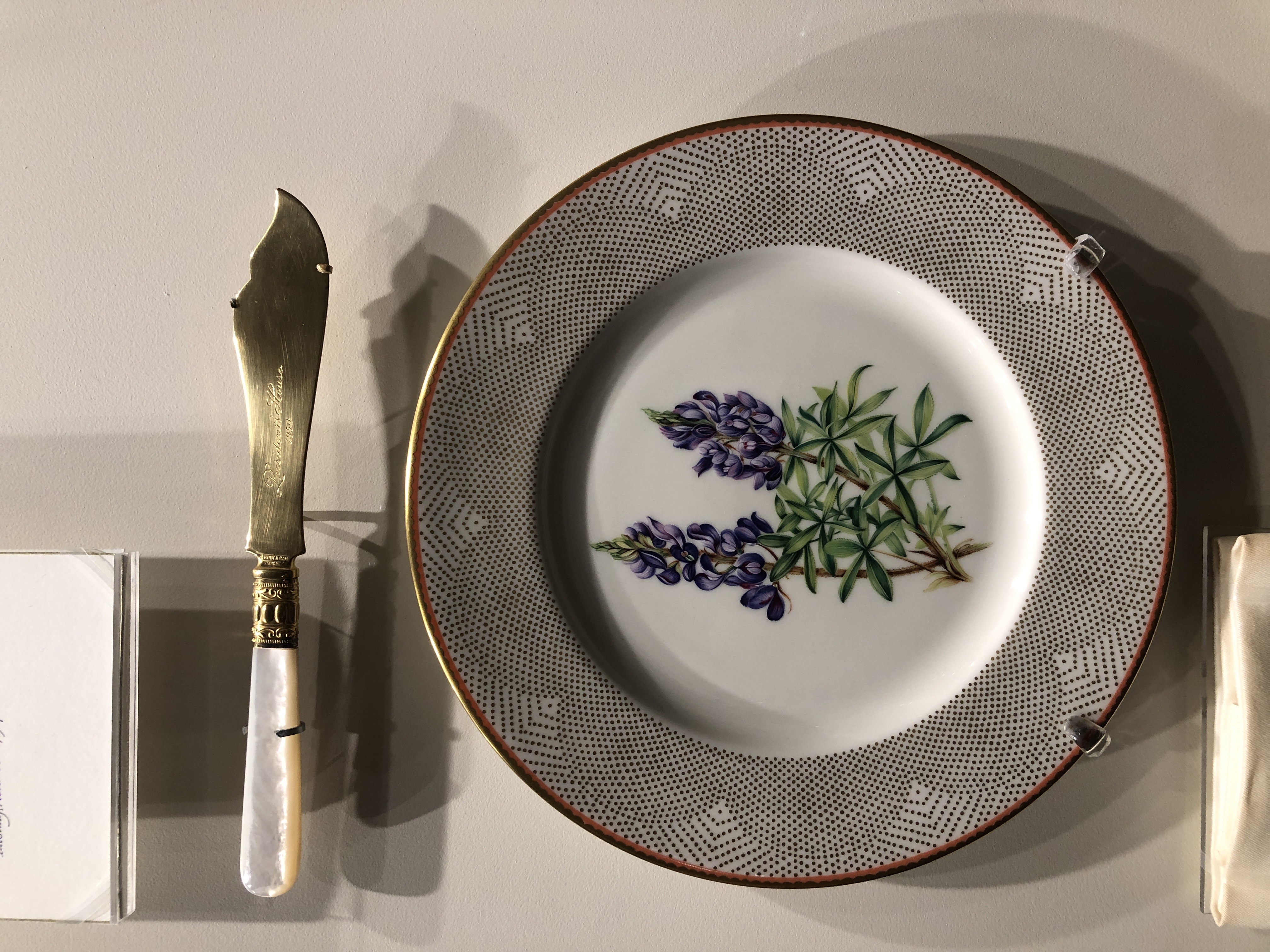 That's all for this week. As always, thanks for reading and have a great weekend!

P.S. For some more reading for your weekend, check out Lady Justice by Dahlia Lithwick. This book "is an account of some of the extraordinary women lawyers to whom this country owes a debt for their leadership and fearless advocacy during some of the darkest days of the Trump administration." Thanks to Yael Bromberg for the book recommendation! 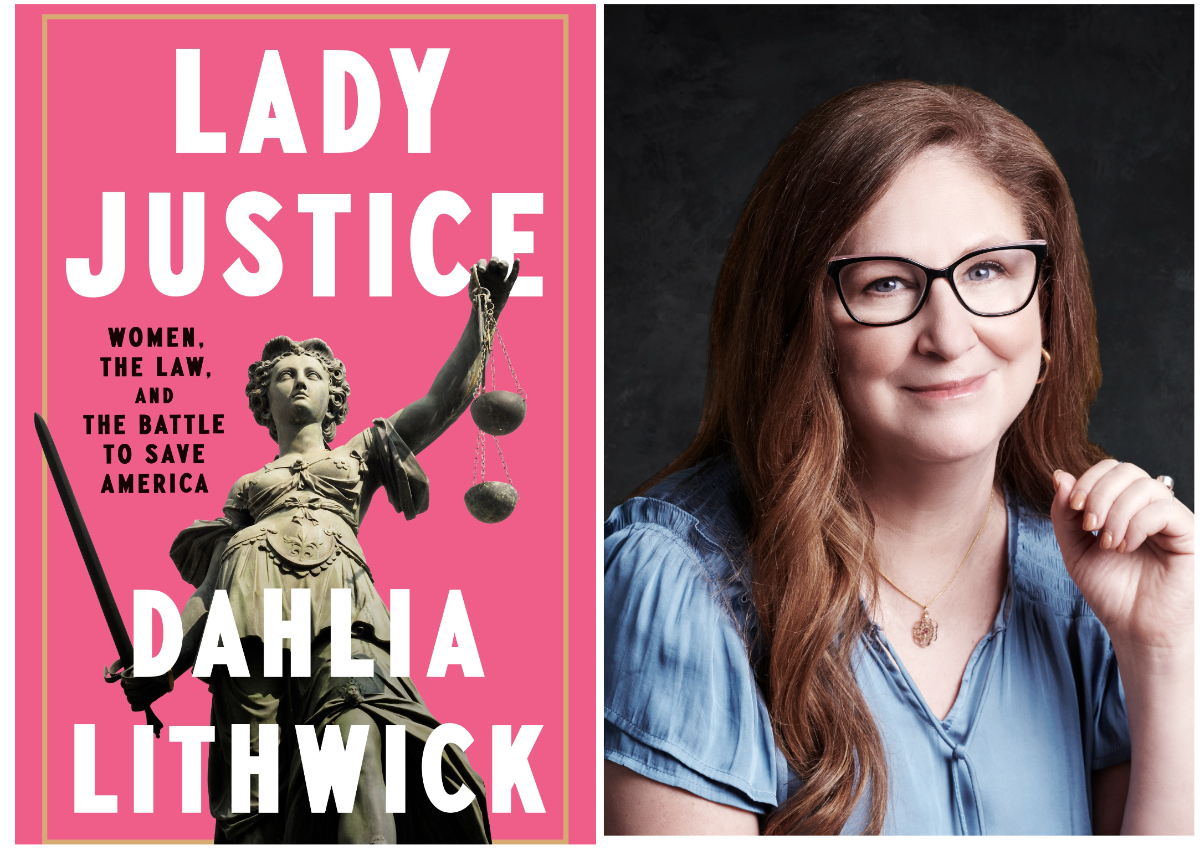