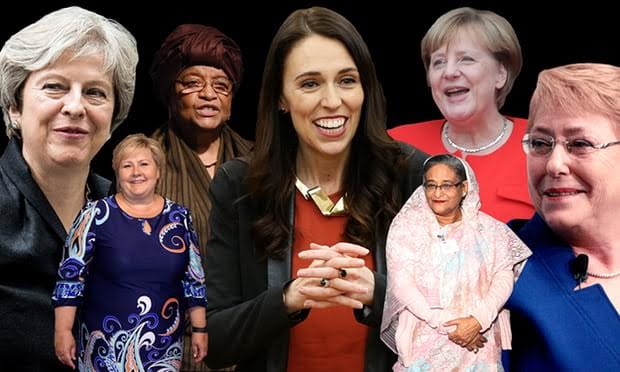 New Zealand has a new female prime minister Jacinda Ardern who joins just 12 other women heads of state world wide and at 37 is the youngest female head of state in New Zealand's history according to this excellent piece in The Guardian that also lists the other current women leaders.

It also means she joins a group of 12 other women who make up the world’s currently serving female heads of government, or 13 if you include Taiwan’s Tsai Ing-wen, who was elected as the democratically-ruled island’s first female leader last year. The countries the women lead represent less than 7% of the UN’s 193 member states.

Of the 13 women, six are heads of European countries, two are heads of South American countries and four are their country’s first female leaders. Europe counts the most women in power. Bangladesh leads in longevity – its prime minister Sheik Hasina has been in power for 13 years, accumulated over two terms. Marshall Islands president Hilda Heine is Ardern’s only female counterpart in the Asia-Pacific region and is relatively new to the job, having served just over a year.

In November, the group will shrink again as Liberian president and first female African head of state, Ellen Johnson Sirleaf, steps down after serving a maximum two terms in power. None of her potential successors are female. Doris Leuthard will also finish her tenure as President of the Swiss Confederation at the end of 2017 and will likely be replaced by the confederation’s vice president, Alain Berset.

My husband and I traveled throughout New Zealand in 1993 - as part of our honeymoon - to campaign for the mixed-member proportional voting system adopted that same year so I am especially pleased to see a woman in power there. Her win is also a confirmation that proportional voting systems create opportunities for women to serve and lead in greater numbers than our antiquated winner take all system which we have got to change!
Have a great weekend,