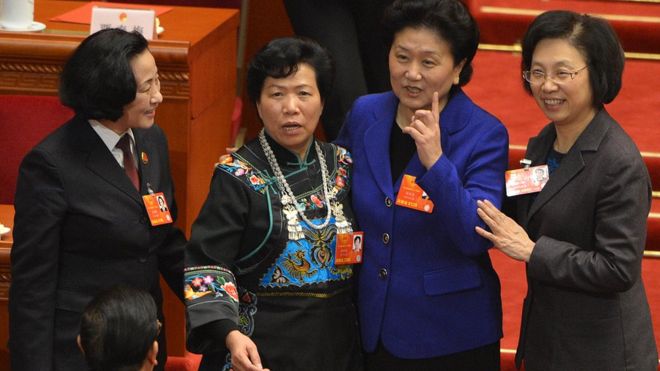 Dear all,
The BBC reported on women's representation in the Communist Party and in governmental positions in China:

Of the 89.4 million members of the Chinese Communist Party, just under 23 million are women - that's 26%.

And women make up 24% of China's National Congress - the sprawling national parliament. You don't have to be a Communist Party member to sit on that.

Women are less represented the higher up the political tree you climb.

After the last Congress in 2012, only 33 women sat on the Central Committee which elects the powerful Politburo - that's 9%.

Only two of the 25 members of that Politburo were women - 8%.

An update on Canada from the Montreal Gazette entitled "More Women Running But Gender-Parity Seems Far Off" reports on the status of women's representation:

“At this pace, will it take more than half a century to achieve parity at the municipal level, particularly in terms of candidates for the position of mayor?” Groupe Femmes Politique et Démocratie (GFPD) said in a statement. “It is time to act to correct this iniquity. It’s a question of democracy.”

A non-profit, non-partisan organization, the GFPD is lobbying for “a law guaranteeing gender parity within political decision-making bodies.”

The Himalayan Times reports that parties in Nepal filed their closed party lists for the upcoming elections and that all parties must adhere to a strict 50% quota for female candidates - elections are scheduled for November 26th:

All major political parties — the Nepali Congress, CPN-UML, CPN-Maoist Centre — and other regional and fringe parties submitted their list of PR candidates for all 110 seats of the parliamentary assembly and 220 seats of the provincial assemblies of seven provinces.

The Local Switzerland reports on an interview with justice minister Simonetta Sommaruga regarding the question of gender quotas to increase women's representation:

According to a story from Politico women are under-represented in public and political life across Europe - even in countries that have made a commitment to gender equity - the report concluded that proportional voting systems and gender quotas (targets) are key to electing more women - grounding Representation2020's constant refrain:

The Council recommended countries implement gender quotas in their legislation or in political parties. Countries that have such systems achieved a better gender balance than those that didn’t, especially when quotas are enforced with sanctions. Women’s representation increased significantly in countries with such systems since 2005, when the Council first checked up on countries’ progress toward meeting the 40-percent goal.

Salon covered FairVote's predictions for winners of the 2018 House races which faults the winner take all voting system and single seat districts for limiting competition and voter choice so thoroughly that's it is possible to predict winners in 86% of House races based on partisanship of the district alone:

Even though Democrats have a major statistical edge over Republicans going into the 2018 midterm elections, it's very likely that the GOP will still control the House of Representatives next year.

"We project that Republicans are likely to maintain control of the House even in a Democratic wave, unless Democrats have more than 55 percent of the national party preference — which no party has done in House races in decades," explained FairVote, a 501(c)(3), on Wednesday. "In a 50-50 year, Republicans would likely increase their share of House seats to more than 56 percent."

FairVote added, "Expect more than nine in ten incumbents to win in 2018, even with midterm election volatility."

The Fair Representation Act - HR 3057 eliminates gerrymandering, creates more open seats and partisan fairness and will elect almost twice as many women to the House in the first election - see this chart that shows impact of the #FairRepAct of the representation of women and people of color.

Pennsylvania ranks second-to-last out of all 50 states — ahead of only Mississippi — in electing women to representative positions in government, according to an organization called Representation2020.

The Maryland-based initiative ranked every state in the U.S. this year and gave the commonwealth an F, with a “gender parity” score of 6.5 out of a goal of 50 points.

The report noted Pennsylvania has no female U.S. senators, members of the U.S. House of Representatives or statewide executives; 19 percent of the state Legislature is made up of women; and relatively few women serve as mayors of cities and county commissioners.

I was pleased to learn that Californians for Electoral Reform have a Wilma Rule Award to honor the late academic who pioneered research into the connection between proportional voting systems and the election of women candidates.

Many advocates for women's representation hold the view that if more women simply ran for office, or if women candidates had more campaign financing, then far more women would be elected. But Professor Rule's research of electoral methods and women's representation around the world demonstrates the deficiency of that viewpoint. Her research and that of others showed unequivocally that if you want more women elected to your legislatures, the single most important change is to get rid of our 18th-century winner-take-all electoral system in favor of more modern "full representation" electoral methods. Steve Chessin, Californians for Electoral Reform

There is a campaign underway to collect super short (15 second) videos from fans of Ranked Choice Voting to help FairVote celebrate its 25th anniversary. It would be fabulous if you could record something quick and fun this weekend and Tweet it to @fairvote or post if on the FairVote Facebook wall! Thanks!

And finally, FairVote has a new app for Ranked Choice Voting that was used to choose a presidential candidate from a lineup of celebrities & billionaires which Oprah Winfrey won by a huge margin! See more results here and consider using the RankIt.Vote app at your next meeting or conference!
Have a great weekend!
Cynthia
Share
Topic:Weekend Reading