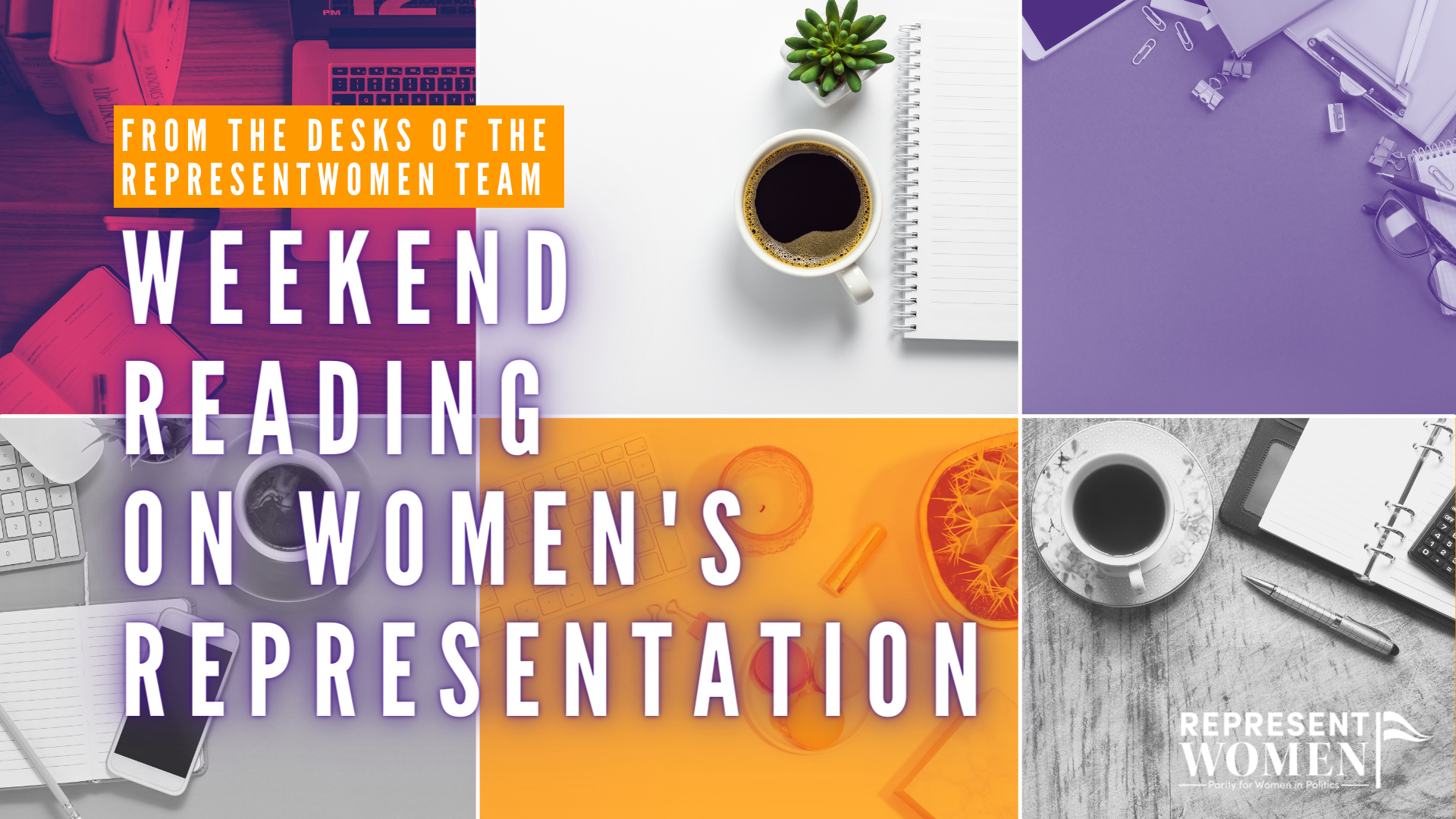 We are excited to share that RepresentWomen is growing! As Cynthia is away this week, this Weekend Reading is brought to you by our team.

First up, we have a piece from Katie Usalis, our Outreach Coordinator:

I recently asked a friend of mine why she thought there were so few women in politics. Her response was that it’s probably because politics just isn’t the place for women, that it’s more of a “man thing.” Recent research in the American Political Science Review reveals that these beliefs don’t exist by accident, but that girls are socialized to lose political ambition from a very young age.  The 19th*’s Barbara Rodriguez met with one of the authors to talk about how deep gender bias runs in American politics:

“[The team] kept having these conversations over and over again — there’s a lot of interventions that we’re seeing that are often very successful in trying to get more women to run for the state legislature level or local office. But we are not seeing dramatic changes in the actual overall level of women’s representation in the United States. By all accounts, we’re looking at maybe 2100 before we’re anywhere close to gender parity if we’re the most optimistic about levels of women’s representation.

We kept thinking maybe this actually starts much earlier than trying to recruit people that are in their 30s. So we set out to try to understand whether or not these gender gaps, in particular, in interest in politics and interest in holding political office, exist already among younger children, and we find that they do.”

The US is not alone in this. Gender bias exists all over the world, and can be especially powerful in countries like Mexico where there is a strong sense of traditional values instilled in the culture. Attitude barriers can be the toughest to change, and imagining changing the attitude of an entire nation or culture is overwhelming.

What is encouraging, though, is that countries (including Mexico) are taking important steps to update their electoral rules to remove the structural barriers that women face in politics. For example, Mexico amended their constitution in 2014 to incorporate legislated quotas for the Chamber of Deputies (House) and the Senate. The amendment states that political parties are required to guarantee that at least 40% of the candidates on the lists are of the same gender. Parties can embrace even higher quotas if they chose, and many do. Mexico also uses a mixed-member proportional representation system, which we know allows for a more representative democracy than our winner-take-all system. Is it working? Well, despite gender bias, women currently make up 50% of Mexico’s House and 49% of their Senate – so, yes!

Young girls in Mexico are growing up with a lot of women in political leadership. They see women making a difference in their governments and in the policies that affect their daily lives – and not just one or two special women, a whole slew of them! This kind of childhood experience is transformative and will be a powerful force against gender biases for years to come. We can learn from our neighbors around the world and adapt their winning strategies to fit what works best for us. With structural reforms, I believe we can achieve parity before 2100.

Katie recently joined the RepresentWomen team as Outreach Coordinator. She is passionate about the power of political representation as a structural catalyst to equitable growth and development. And about rock climbing.

Philadelphia could be the next major city in the United States to adopt ranked choice voting (RCV). Late last week, the City Council passed a resolution to consider using RCV for future municipal elections. According to Councilmember Derek Greene, the resolution will allow the Council to begin hosting hearings on ranked choice voting to determine how it is done in cities like New York and whether the system could be used to boost turnout and reenergize voters in Philadelphia.

In addition to improving turnout, ranked choice voting helps to level the playing field in crowded races. According to Jon Geeting in the Philadelphia Chronicle this week, Philadelphia’s upcoming elections in 2023 are expected to be very competitive, with the incumbent mayor term-limited and several members of the City Council hinting at leaving their own seats to run in the open mayoral race.

“Our first-past-the-post voting system isn’t the best voting system available in cases where there are large candidate fields and only one possible winner, since somebody can win with just a plurality of the electorate, who the majority of voters don’t support.

There’s a good argument that ranked-choice voting systems do a better job at this by ensuring the winner is somebody who has majority support, and they do this by making voters’ second-, third-, and fourth-choice rankings count for something.

By letting people rank their candidate preferences in order, the voting system can take into account people’s second- and third-choice candidate preferences, and reward the candidates who are most acceptable to a majority of voters. This also helps to remove the “spoiler effect” problem under first-past-the-post elections in cases where there are multiple candidates with the same constituency.”

In addition to producing fairer results, switching from a winner-take-all system to ranked choice voting is one of the best examples of a systems-based strategy for increasing women’s representation in the United States.

At RepresentWomen, our research shows that ranked choice voting creates a fairer process for women candidates. Unlike winner-take-all elections, which tend to foster negative campaigning and incentivize party leaders to tell prospective candidates (disproportionately women of color) to “wait their turn” instead of running, ranked choice elections incentivize alliance-building and enable multiple women to run without worrying about the “electability paradox” or splitting the vote.

While women currently hold 7 of the 17 seats on the Philadelphia City Council, the city has never had a woman mayor and few women have run for the role historically. If the predictions made by local journalists hold true, the 2023 election cycle could boast a record number of women running for mayor, and multiple open seats on the City Council could similarly attract a diverse slate of candidates. While it is too soon to tell if the Council’s recent resolution will lead to the adoption of RCV in time, the 2023 elections in Philadelphia will be worth watching.

Courtney Lamendola joined the RepresentWomen team in 2018 and has served as the Research Director for the last few years. In addition to conducting research on election systems and women’s representation, Courtney manages the internship program at RepresentWomen.

And lastly, let’s hear from Kaycie Goral, our Digital Manager, for an update on all things RepresentWomen:

On unpredictable days it’s hard to see where we stand in the bigger picture.

In the morning, we read news alerts through the rising steam of our coffee cups. We read emails received just in time for our mid-afternoon stretch.With subject lines that say “Hello Friend” or “only YOU can save us” coming from the offices of sitting congresspeople.We read sourceless (but pretty!) infographics on our phones scrolling through the nighttime.

This is constant evidence of our changed world and how we might interact with it, should we choose.

If you don’t know what the proper outrage is, if you don’t understand why the problem persists, and if you don’t see how we make it better, well, these constant reminders might make you feel a little stuck. So stuck that you might start to tune it all out and pretend that staying still in the muck is far better.

But, our team wants to give you a hand. We want to get you walking again, with data and direction.

We at RepresentWomen welcome change, but we never leave equality to chance.

Today, RepresentWomen itself is changing! Let’s do a roll call: 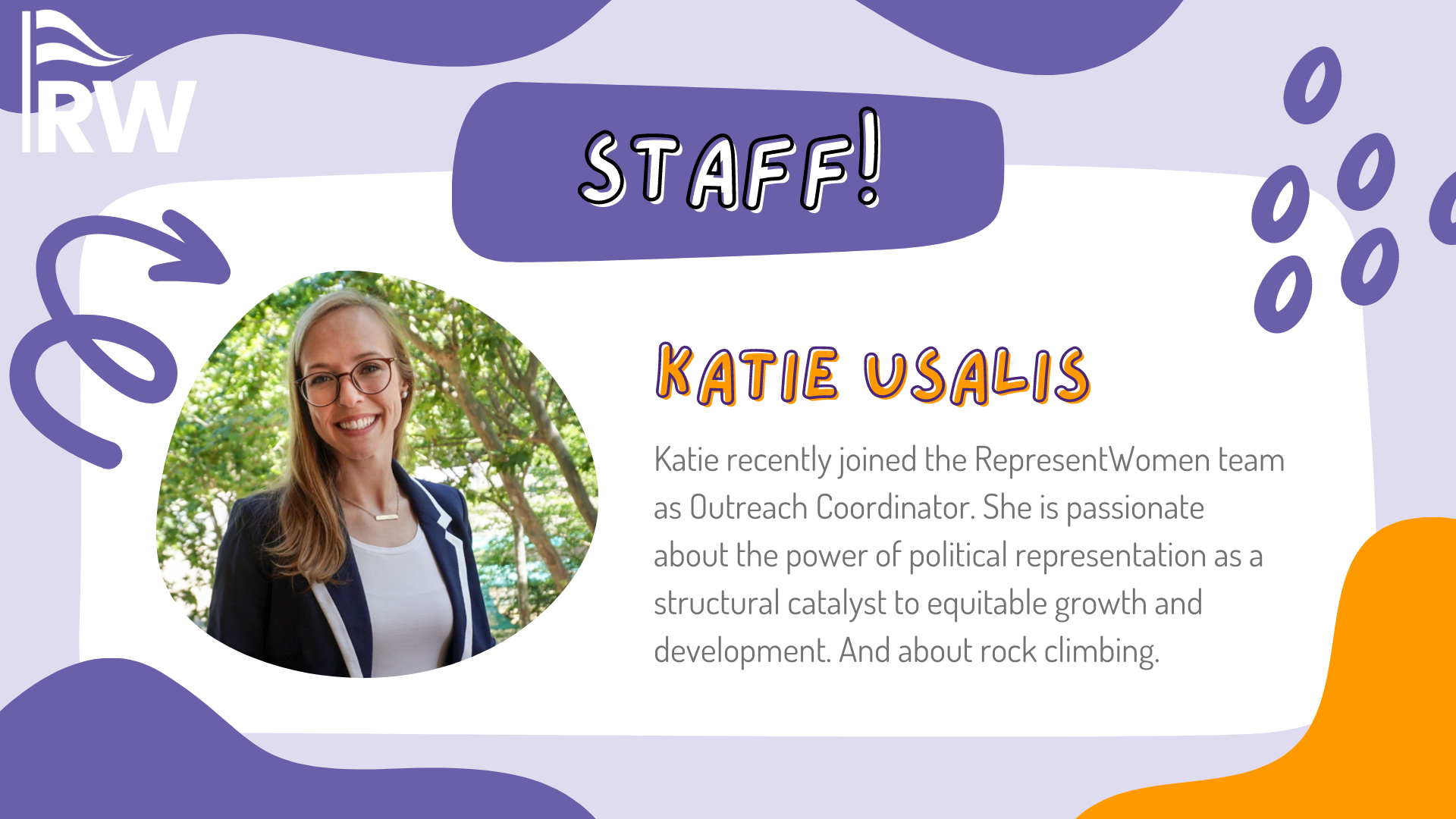 Staff First! Let’s introduce Katie Usalis, our new Outreach Coordinator.  You’ve already heard from her, and you know she’s fabulous. Katie’s latest piece “Political Accessibility: How helping one can level the playing field for all.” is featured in Gender On The Ballot, based on our Disabled Women’s Representation Research. 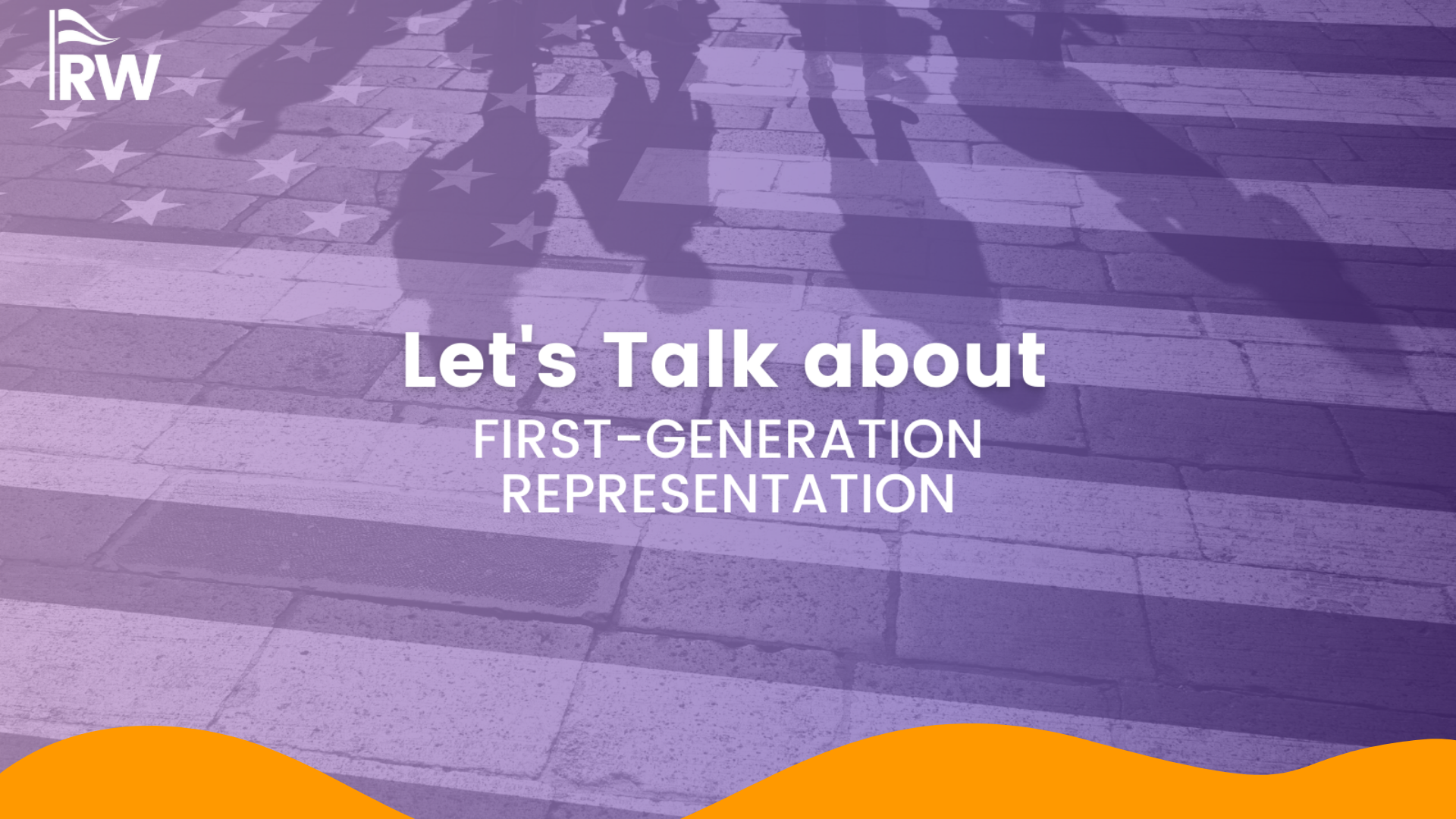 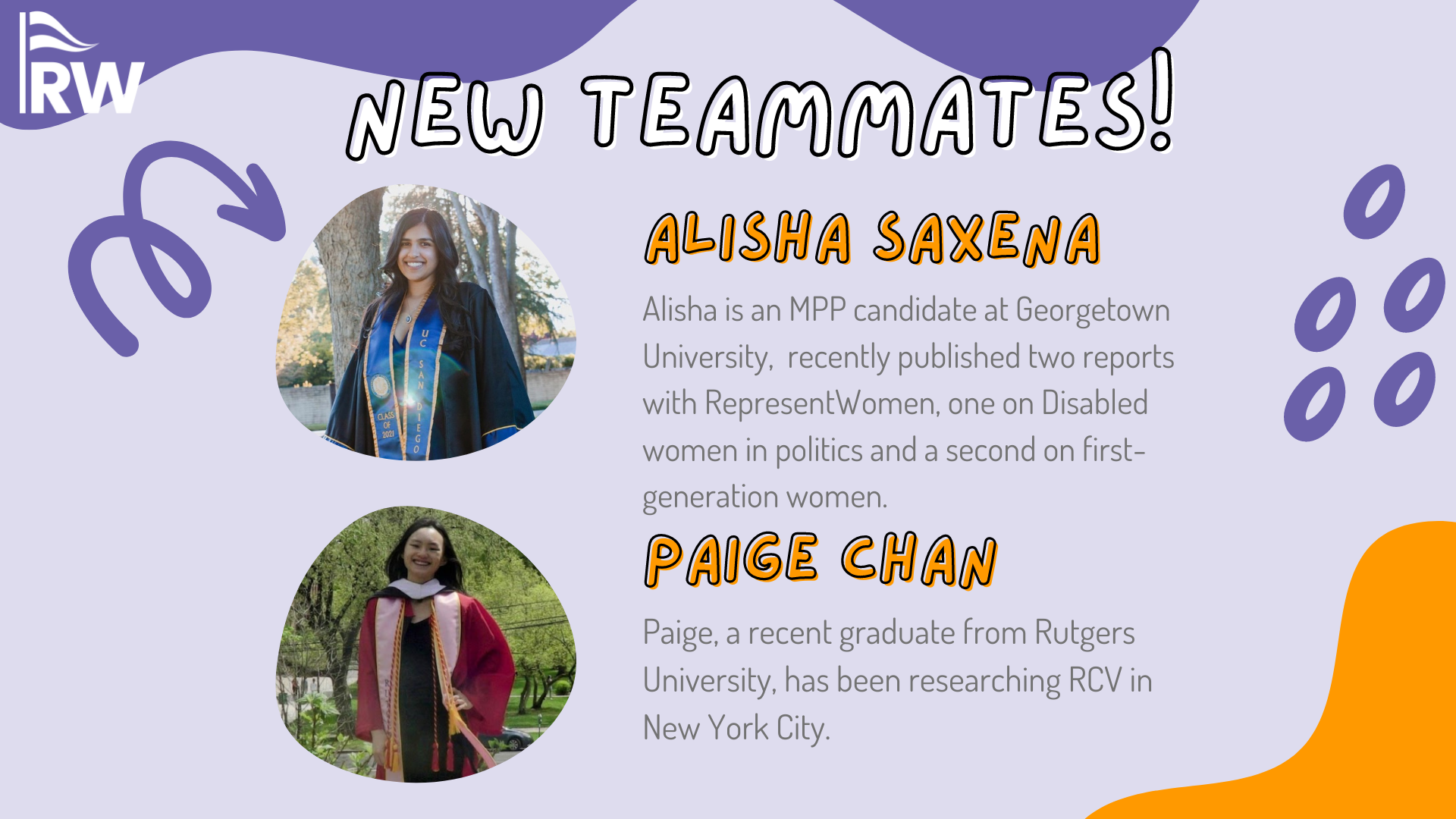 Paige, a recent graduate from Rutgers University, has been researching RCV in New York City. An MPP candidate at Georgetown University, Alisha recently published two reports with RepresentWomen, one on Disabled women in politics and a second on first-generation women. 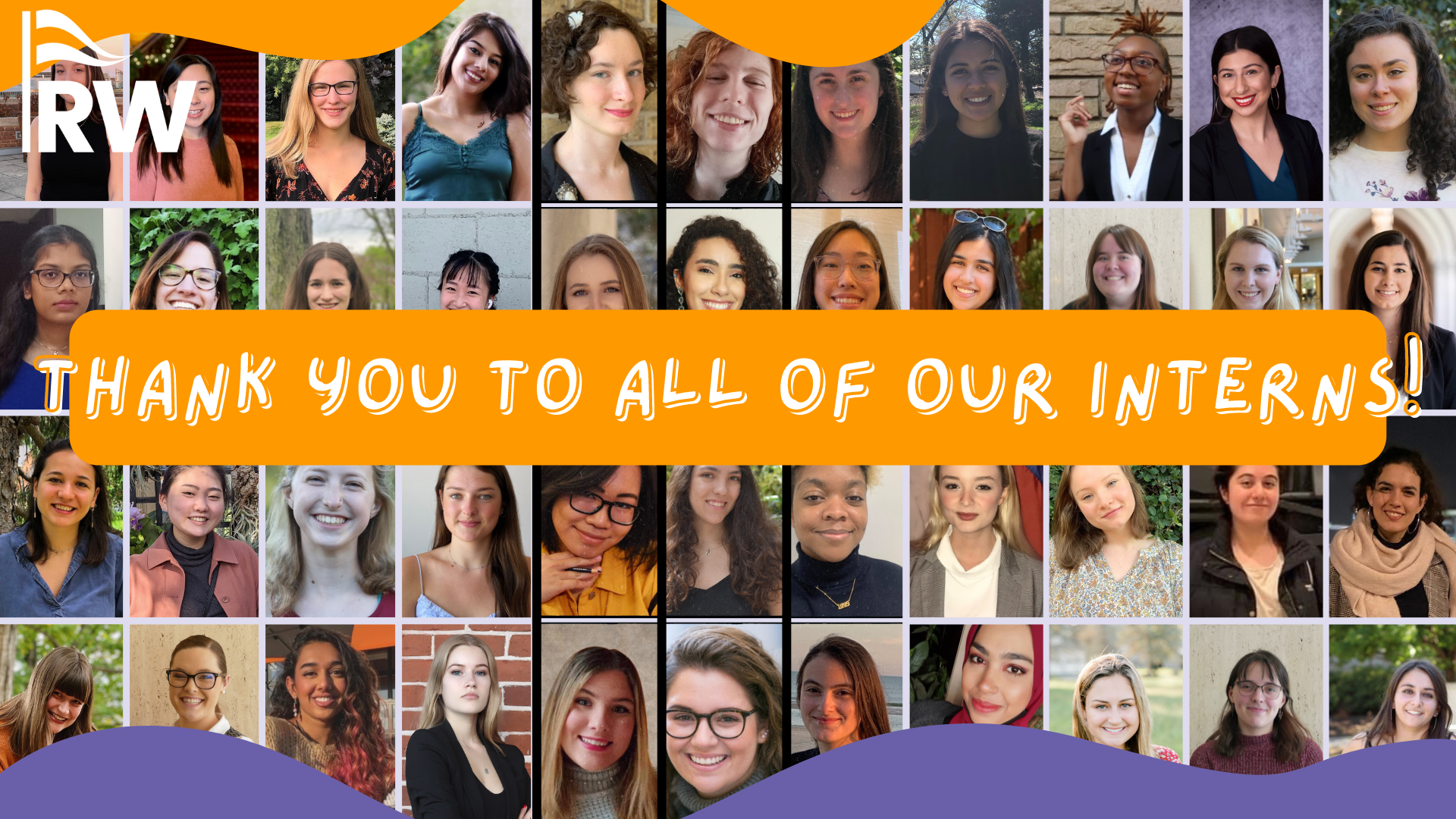 These two incredible staff members started their work with us as interns!

Their path shows the astonishing depth of talent our interns, both alumni and active, possess! Our team learns so much from our interns, and we are thankful for their impressive and profound work. It’s truly inspiring to help build a network of young people, young WOMEN, who care deeply about advancing women’s representation and building a better democracy through research and advocacy. 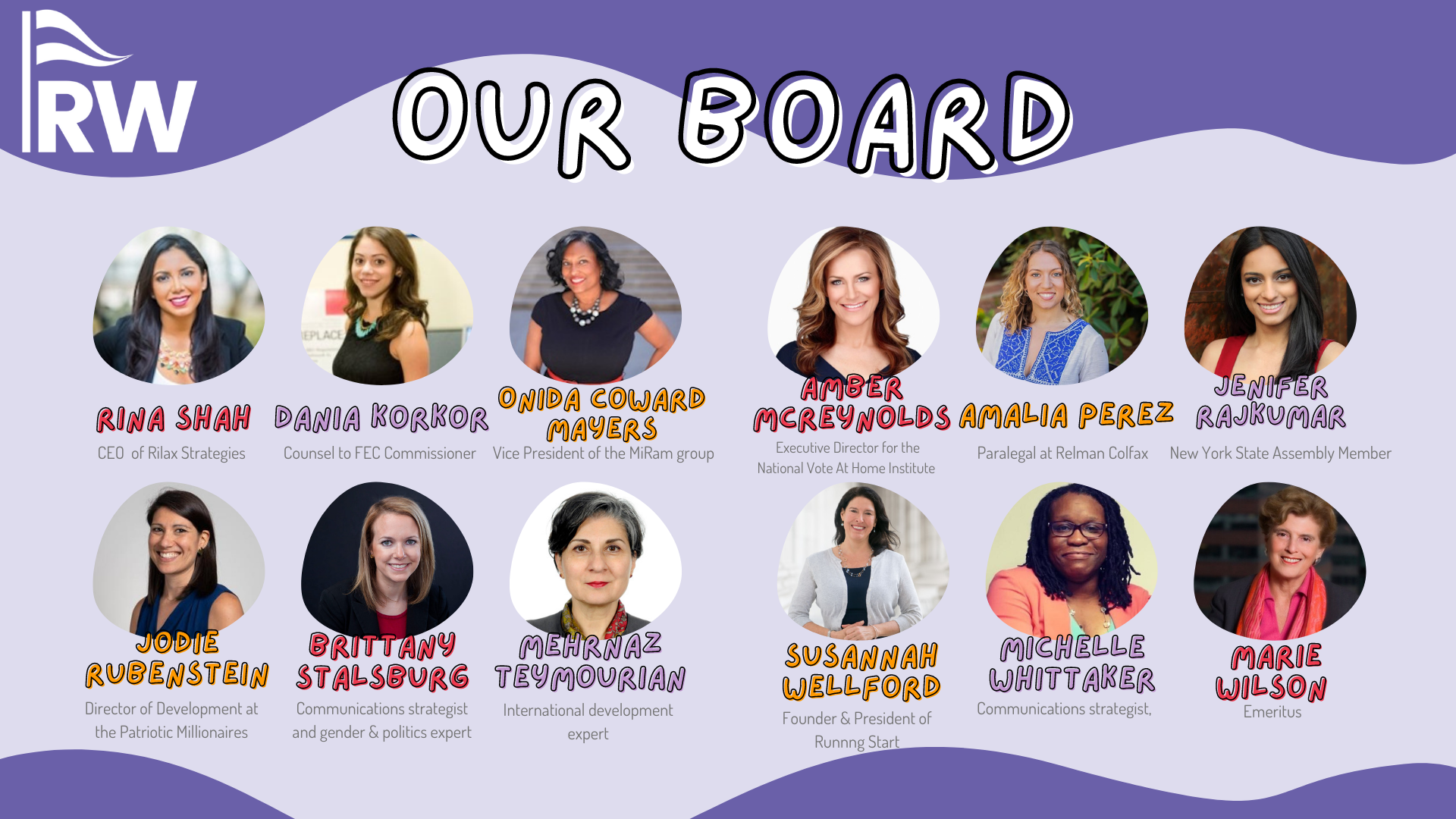 Speaking of impressive women, let’s give some love to our RepresentWomen board members! We are so grateful to be in the company of such outstanding women and having their support. These women include CEO’s, captains of foundations they’ve created, political executives, electeds, champions of causes, and advocates of democracy. These women who bring their diverse perspectives and expertise to the RepresentWomen board inspire and guide us, and our team thanks them wholeheartedly.

In an exciting development, RepresentWomen is working with an accoladed measurement and evaluation team to build our role as a changemaker in our field. Additionally, We are excited to collaborate with partners to build a successful and lasting movement around women’s political representation and systems strategies. As our RepresentWomen family grows, we hope to bring you all along on our journey, advancing women’s representation and building a 21st-century democracy together. 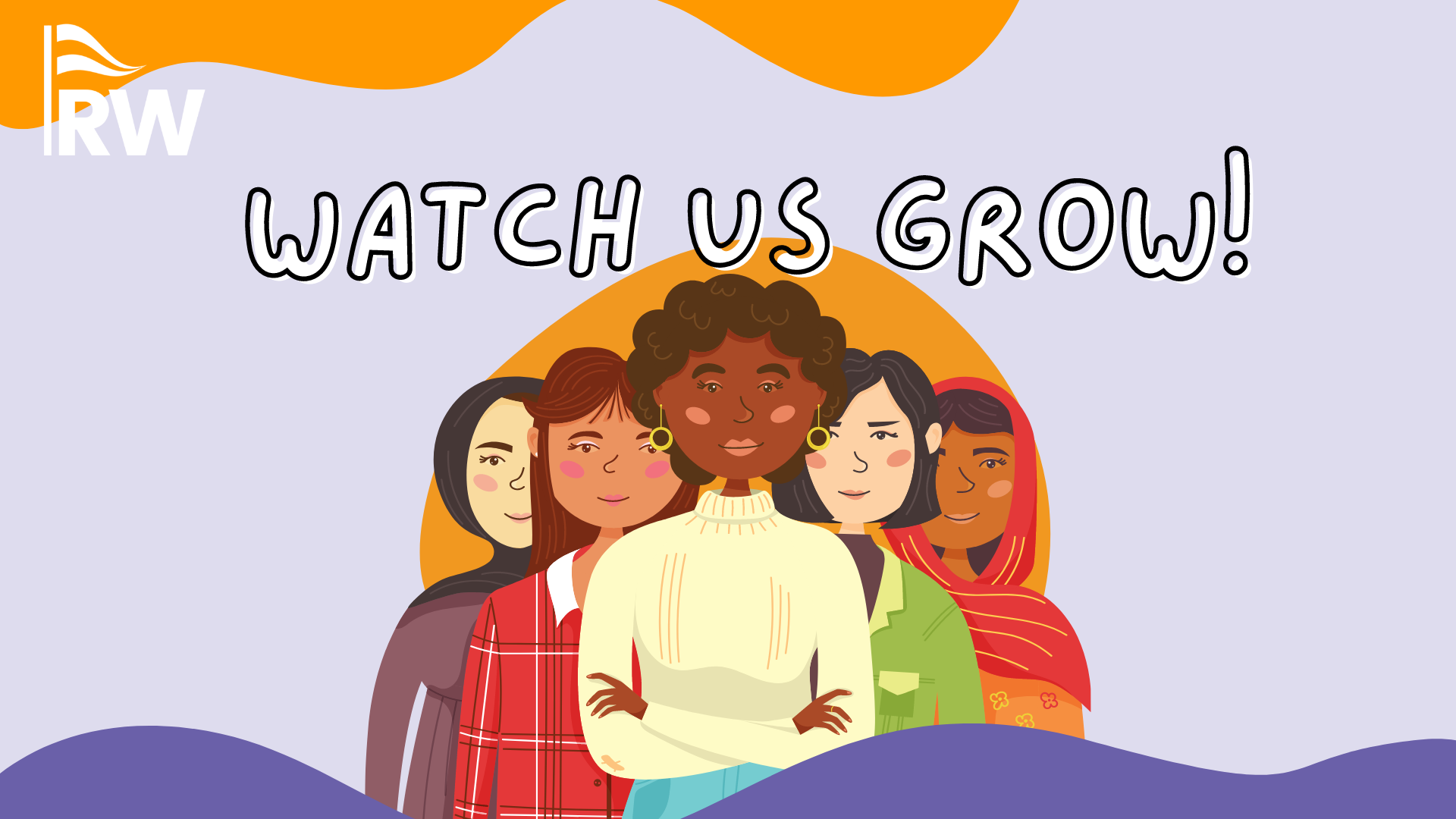 That’s it from me!

Next week you’ll get our fearless leader, Cynthia, back on your reading list. It’s been a pleasure, and from the whole RepresentWomen family, we hope you have a fantastic and inspiring weekend!

Kaycie Goral is the Digital Media Manager for RepresentWomen. She is a former Communications Fellow for RepresentWomen, a “Corona-Grad” from American University, and a creator of compelling digital storytelling for advocacy.