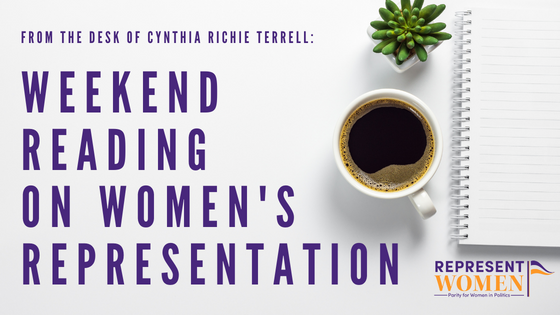 Over the past week, RepresentWomen has been mentioned and featured by various publications and organizations! From op-eds written by our team to our insightful research reports, we're grateful that more and more people are interested in the structural solutions to strengthen democracy and increase women's representation. 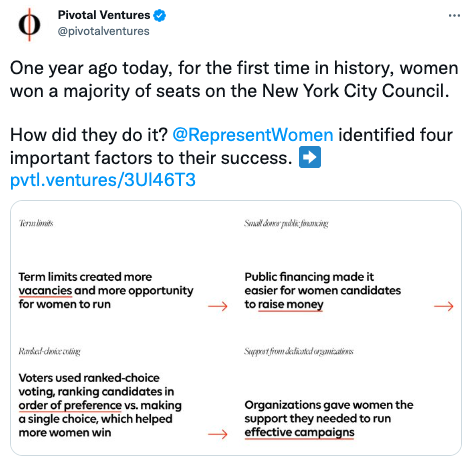 Our terrific partner Pivotal Ventures shared an article on What to Watch on Election Night, specifically in regards to women's representation. They cited our 2022 Gender Parity Index as well as our Why Women Won in 2021 ranked choice voting in NYC report as resources to help answer questions about our current political landscape.

Many of the policies that shape our day-to-day lives are set at the state level. Yet so far, only one state in the entire country has a female-majority legislature: Nevada. With a record number of women running for state legislature this year, we’ll be watching election results to see which states are getting closer to parity. According to the Gender Parity Index created by our partner Represent Women, eight states (New Mexico, Maine, Nevada, Washington, Michigan, Minnesota, Oregon, and New Hampshire) are critically close to reaching gender balance...

[A]n analysis by Represent Women showed that ranked-choice voting played a crucial role in electing New York City’s first female-majority city council. Twenty-five of the 31 women now on the council are women of color. And 27 of those women won their primaries through ranked-choice voting. (Another fact worth mentioning: Fifteen of those women attended candidate training through our partners at Ascend Fund.)

If more voters choose to adopt this way of voting, momentum for this promising reform will build—making it easier for women and people of color to get elected and ultimately benefiting our democracy as a whole.

Vermont May Send its First Woman Representative to Congress 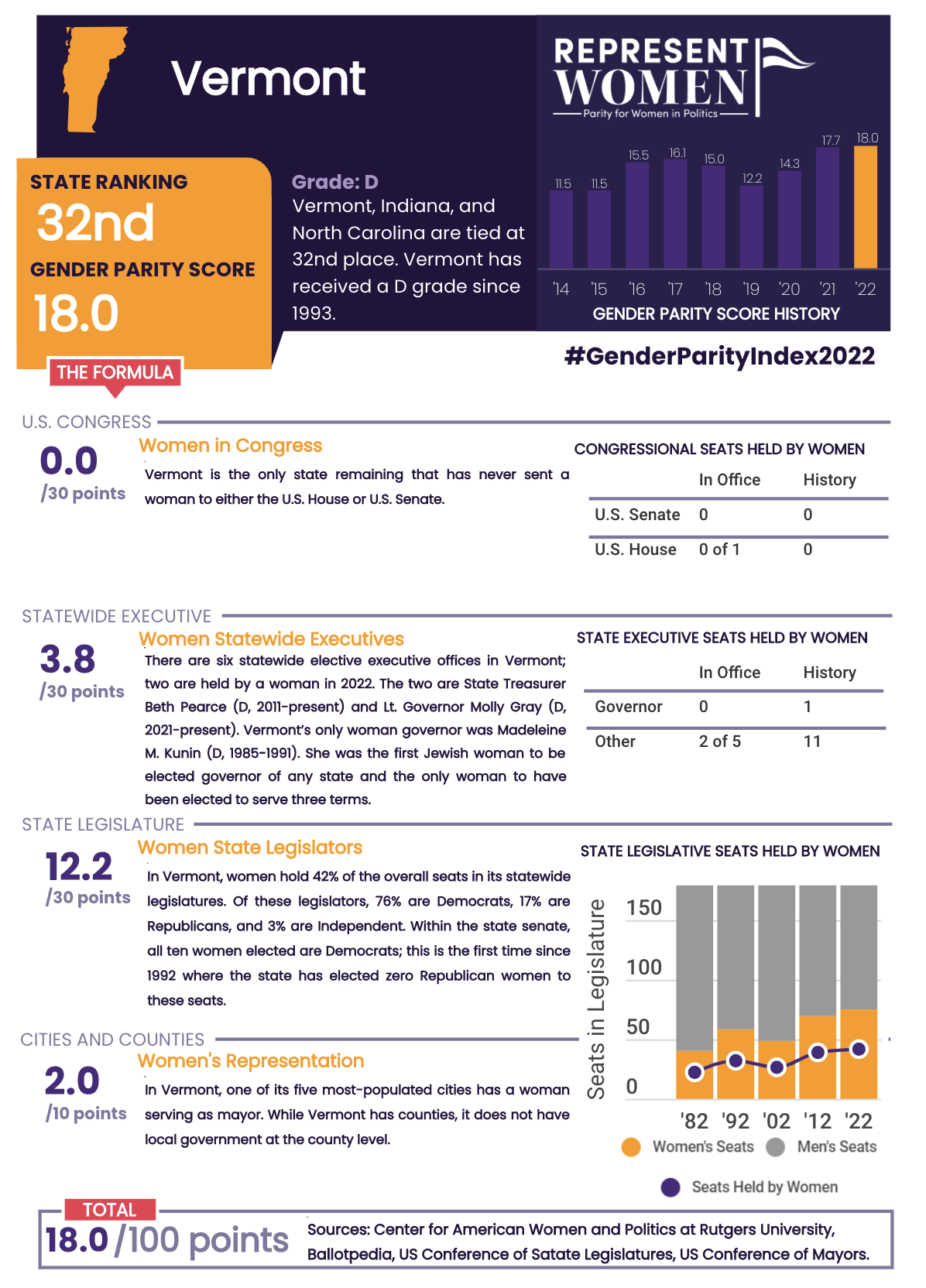 A quick Google search will tell you that Vermont is one of the Democrats' most loyal states; despite its Republican governor, VT has voted Democratic in the past five presidential elections. According to the Cook Partisan Voting Index, Vermont ranks second in terms of "most Democratic states in the US." But, this state has never sent a woman representative to Congress. With Becca Balint, a 54 year old Democrat, running for Vermont's singular House seat, that may change.

Balint is the heavy favorite in her race in November’s elections. If she wins, as polls indicate, she will break two major barriers: not only will she be the first woman to represent Vermont in Washington, but also the first openly gay person...

Balint, a former teacher, said the prospect of being the first woman elected to Congress from Vermont is both exhilarating and daunting. Asked whether liberal politics can coexist with male chauvinism, Balint paused briefly and fixed her gaze on her interviewer. “You’re asking me if there is still sexism?” she said. “Yes, there is.”

The story of why it has taken Vermont so long to reach this moment is an illustration of the hurdles that women still face when entering electoral politics. Some of the obstacles are straightforward — the difficulty of dislodging long-serving incumbents, who are more likely to be men, or the need to take time away from a paying job to mount a campaign, or the obligation for a partner to assume domestic responsibilities.

Notably, in the Vermont Democratic primary, four of the five candidates were women. In RepresentWomen's 2022 Gender Parity Index Vermont received a a D grade and sits at 32nd place out of 50. A large part of this grade is due to the fact that no woman has ever been sent to Congress.

Balint is also a strong supporter of ranked choice voting and cosponsored a bill (S.229) during her time in the Vermont Senate that would implement RCV in primary and general federal elections in 2024. RepresentWomen’s RCV Dashboard shows how localities that use RCV tend to have more balanced political representation in terms of both gender and race. 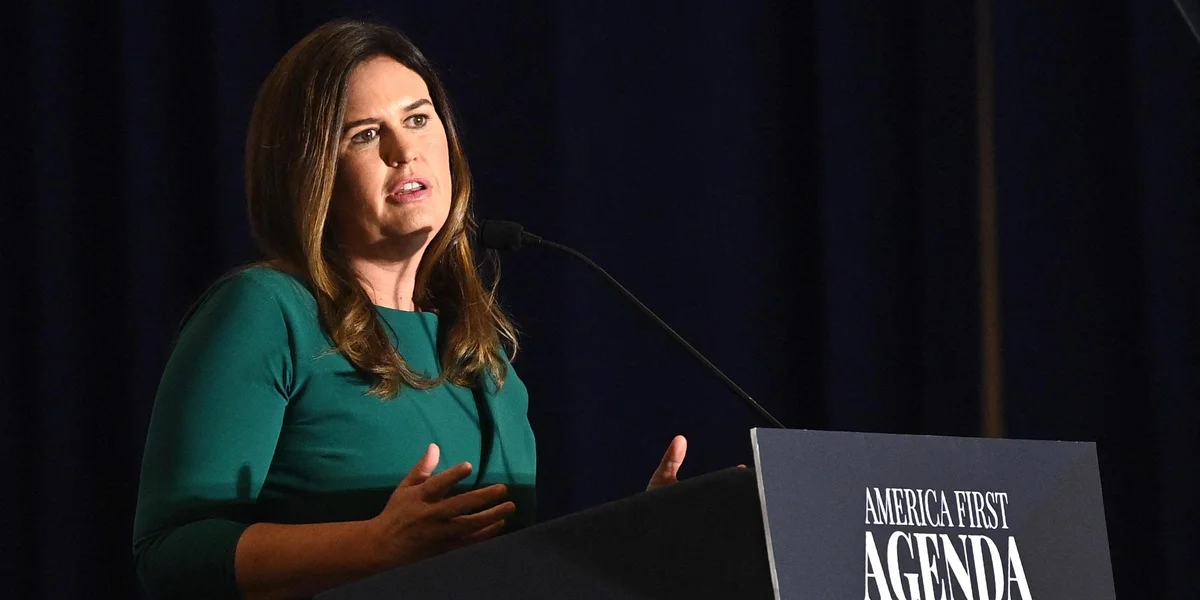 This week, The Fulcrum ran a piece written by our very own former Outreach Intern Jazmin Sanchez. In Could 2022 be the year we finally surpass our record for women governors?, Jazmin makes it easy and gives us a round up of strong shots, good odds, and some "you never knows" on the ballot for governor this fall.

If either of them win, we should have a new record.

Some long shots – but you never know:

As Jazmin says, this election could send a message to the nation that women are leaders in US politics who use their power responsibly and for the betterment of the nation. We at RepresentWomen call on all gubernatorial candidates to use their power to make democracy stronger by appointing a gender balanced cabinet – and you can join us! Use our Appointments Toolkit to access the resources you need to be part of the solution. 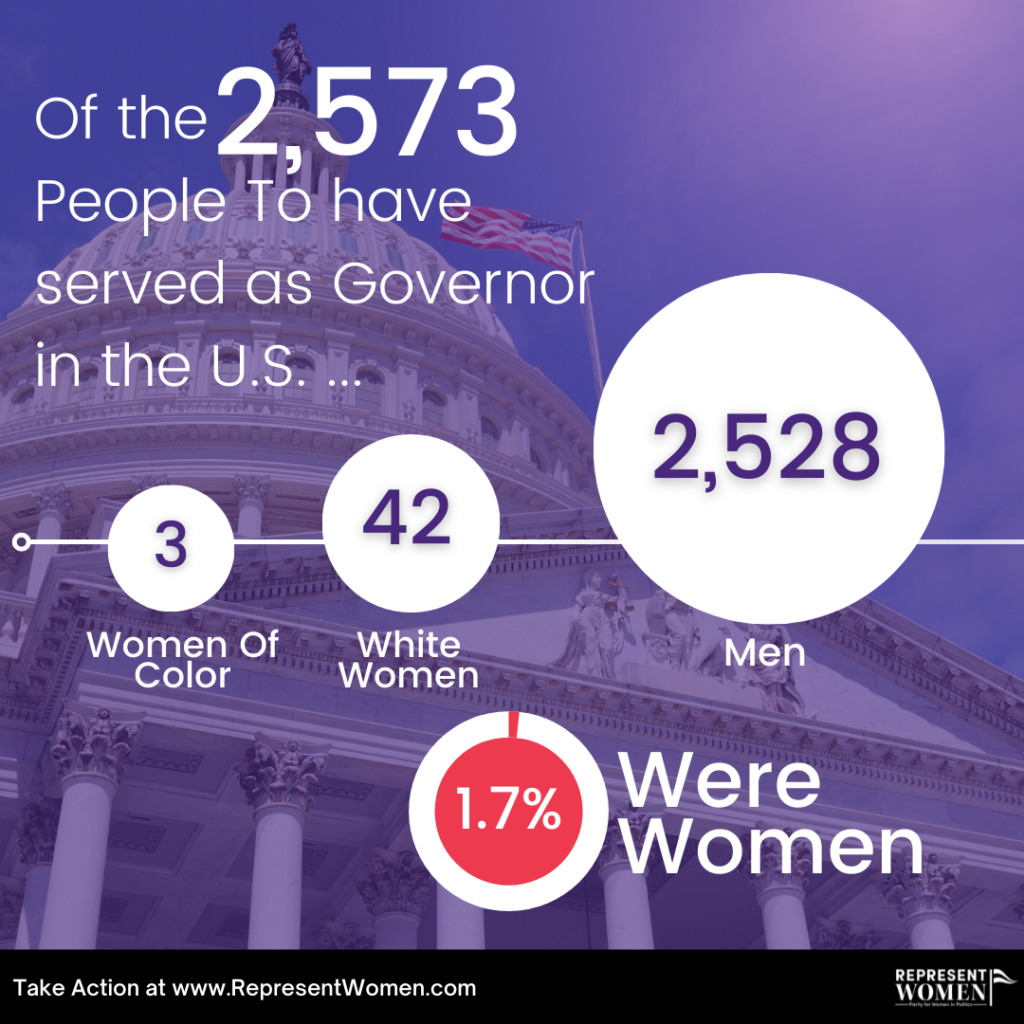 While it is a great milestone that so many women are running for governor, these candidates are seeking office within a system riddled with barriers. RepresentWomen's Communications Manager Alissa Bombardier Shaw also wrote an article on women running for governor that was published in Ms. this week. Alissa highlights why we need more women governors and what systems reforms are needed in order to make running, and more importantly winning, easier for women.

There is hope for gender balance in state leadership. Twenty-five women are running in this year’s gubernatorial elections and, fortunately, there are a number of structural solutions we can encourage them to implement to make gender balance a reality in our lifetimes.

1. Fund women candidates equally.
First, PACs need to fund women equally to men in open-seat races and create funding targets for women candidates, as described in RepresentWomen’s PACs and Donors report. Reforms such as these make it easier for women to run in elections where the playing field is far from level. 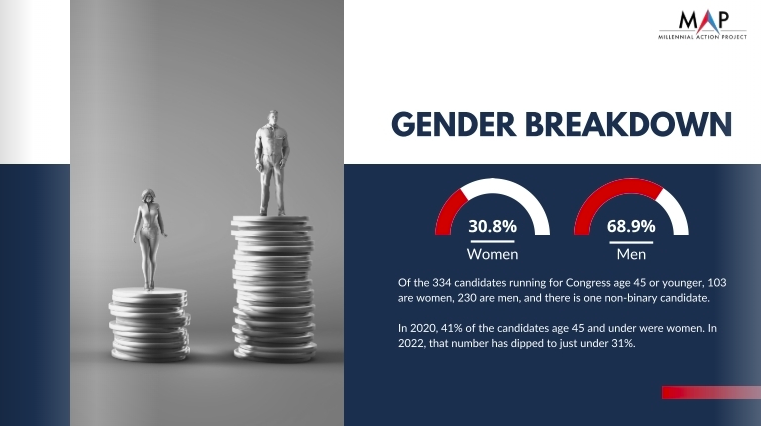 New research entitled Millennials on the Rise from Layla Zaidane, CEO of the Millennial Action Project (MAP) reveals that while more millennials and young Americans are running for office, the number of young women running has decreased since 2020:

With one out of every six candidates for Congress this cycle coming from the millennial generation — a 57% increase in the number of millennial candidates compared to 2020 — it's clear young Americans are running toward what needs to be fixed, not away from it.

334 candidates running for Congress (House and Senate) in November are age 45 or younger.  Of those, 193 are “true” millennials (91 of whom are 35 are younger).  This year we are seeing the first Gen Zers running - there are two on the November ballots...

Cynthia Goes Back to College! 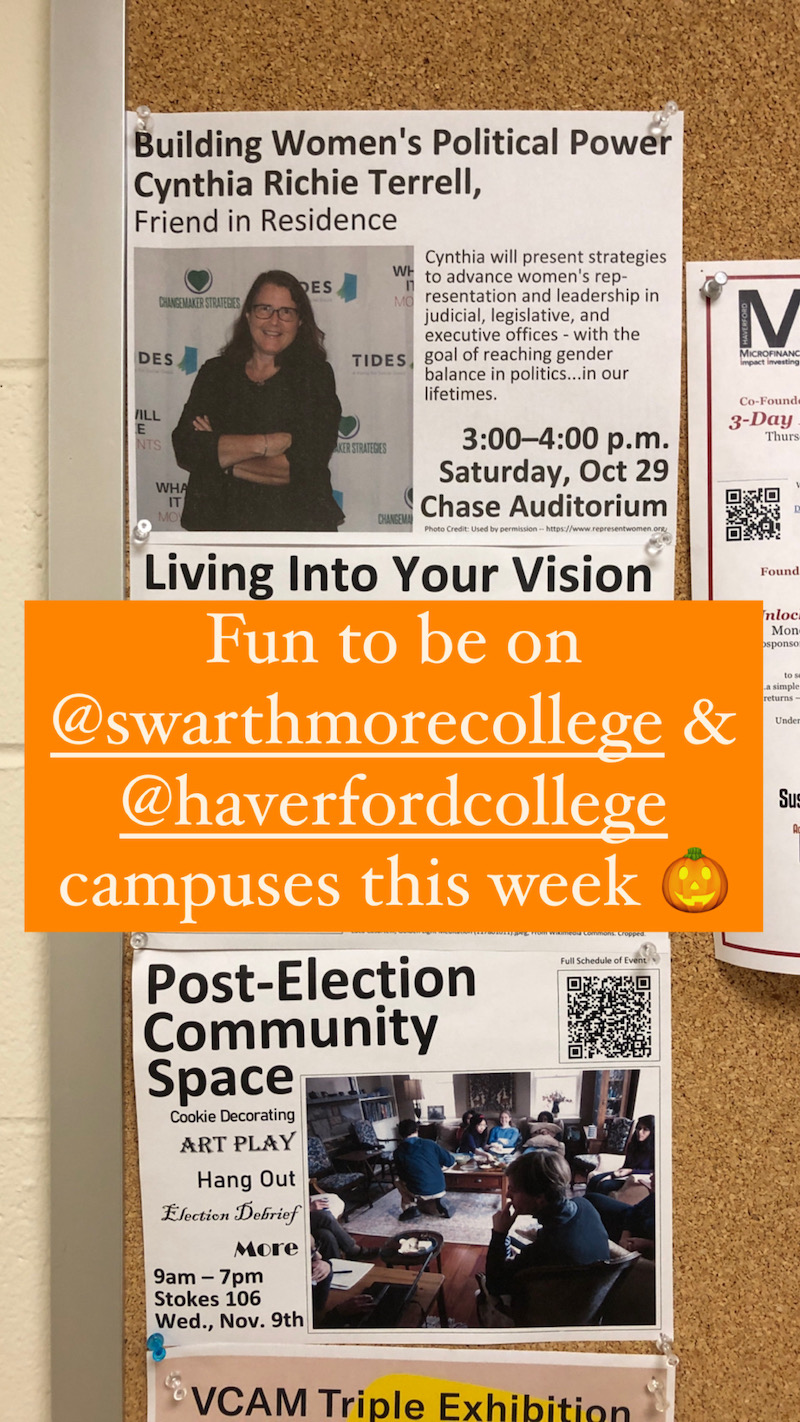 It's been great to be the Friend in Residence at Haverford College where I have spoken with students, faculty, and alums about the challenges facing our democracy and the opportunities to work together to ensure that all of us have a seat at the table where decisions are made. 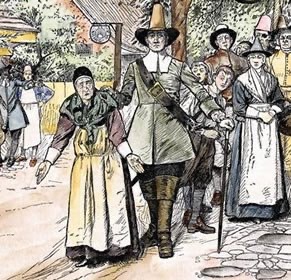 Susannah North Martin, my children's 10th great grandmother, was accused of being a witch, and hanged, in 1692. She was a property-owning widow who spoke her mind and was unapologetic about her beliefs. Susannah is an inspiration to me along with all the millions of women & girls who are speaking truth to power from Iran, to Georgia, to Alaska & all the places in between.

Finally, our fantastic partners at the Feminist Majority Foundation have prepared a guide to voting in the midterm elections that features a lot of great information for voters everywhere. 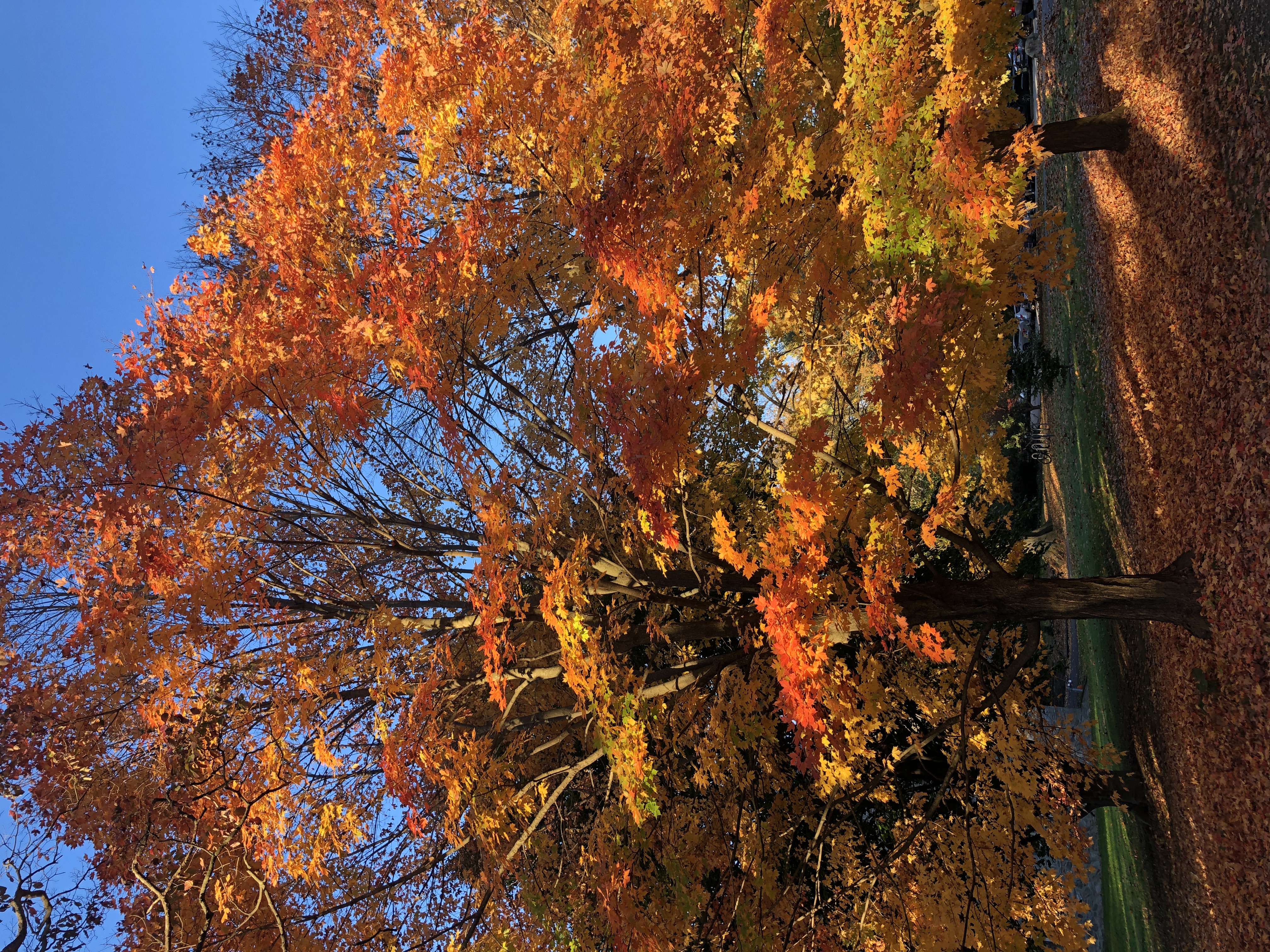 Many thanks to all of you for all you are doing this election season and the rest of the year to advance women's representation... and democracy.

P.S. In 2020, RepresentWomen created a planner celebrating women leaders of the past and present. We've decided to do the same for 2023! Like before, this years edition has key milestones for women, birthdays of over 1000 important women, and beautiful artwork. Use this form to order yours today! 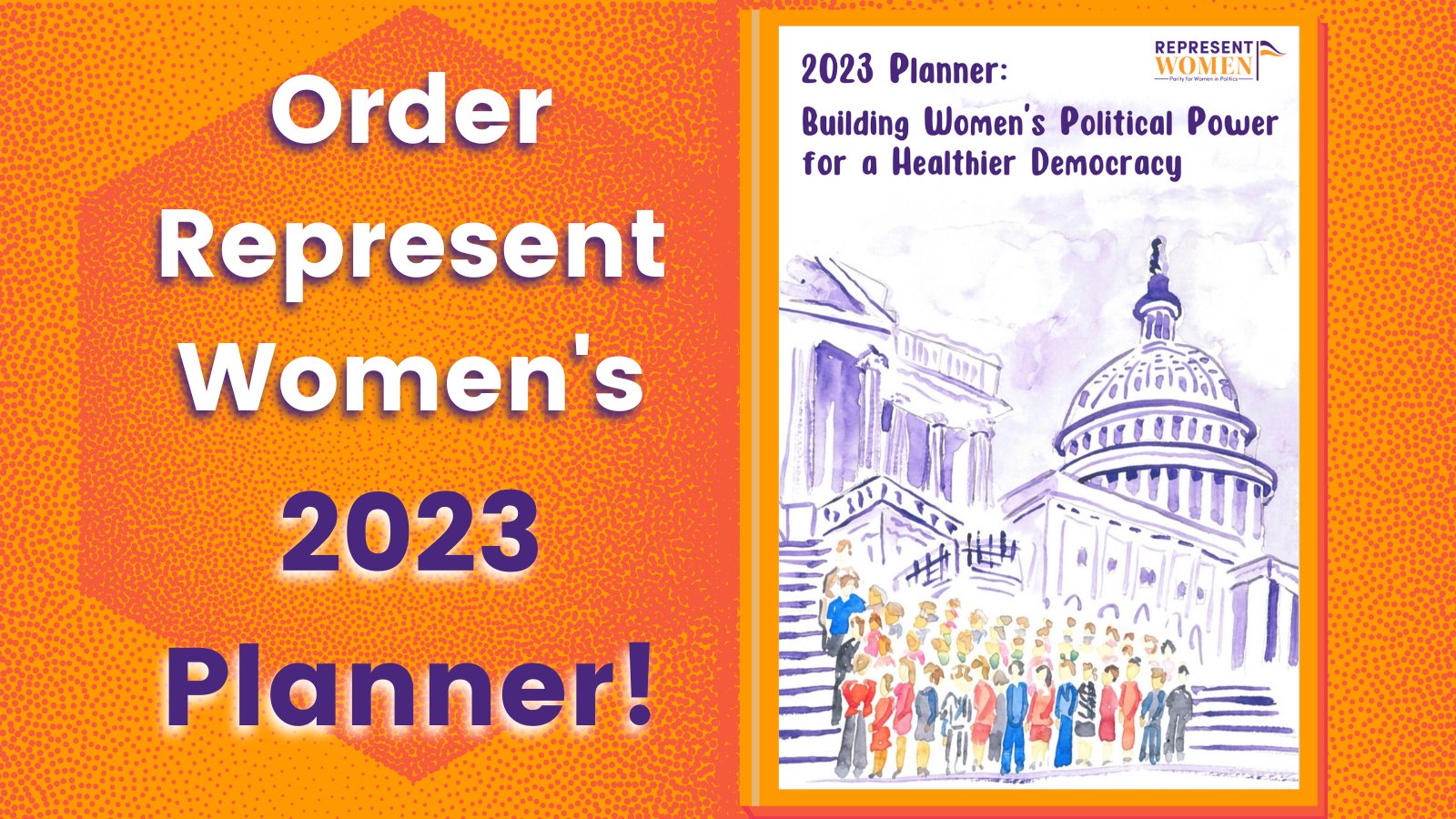