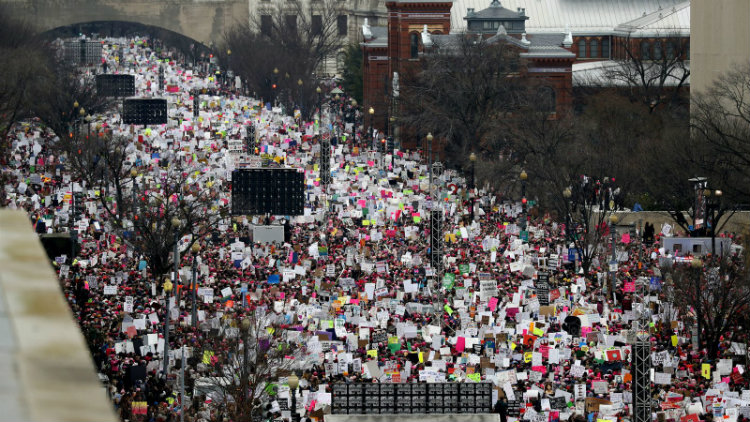 According to this story on the MintPress News the United States has fallen to 49 in ranking of gender equality in a new World Economic Forum report:

The U.S. has a significant gender pay gap and is one of few developed countries that does not have guaranteed paid maternity leave, which the WEF claims is a simple way for the U.S. to increase gender equality.

While a majority of the countries participating in the study are steadily increasing their gender equality, even the top ranked countries, Iceland, Norway, Finland, Rwanda, and Sweden have not achieved gender parity.

Japan dropped to 114th in gender equality in this same World Economic Forum report according to this story in The Japan Times while "Iceland topped the rankings for the ninth straight year, followed by Norway and Finland, according to the WEF, the organizer of the annual Davos meeting of business and political leaders. Rwanda came fourth, up from fifth, thanks to a rise in women’s economic participation."

Politico Magazine has a series of very interesting pieces by various authors on whether America "Will Ever Have a Woman President":

Will America ever elect a woman president? And what will it take?

We asked women (yes, all women) from a range of fields for their insights into why it hasn’t happened—plus when, and how, that could change. Their answers drilled into the structure of American politics, the power of family dynamics in our decisions, the shifting preferences of voters and the pipeline of women candidates themselves. And if partisan competition is the only certainty in American politics today, champions of women’s leadership have this to hold onto: Democrats and Republicans each claimed their party would get the first woman into the White House.

Politico has another piece that draws on data from the Wilson Center Global Women's Leadership Initiative Index released last week by the fabulous Gwen Young and her team:

According to the data, American women remain underrepresented in the civil service, the military, government and the board room, especially at the highest levels of power. Compared internationally, the index places the United States in the middle of the pack—sometimes falling behind countries with significantly less-developed economies. Electing a woman president could help, but that wouldn’t automatically fix America’s mediocre index score, which would require a more comprehensive push toward equality.

Governing had a good story on a number of the big mayoral contests happening next week - a number of which will or may produce a woman mayor:

November will bring considerable changes to the ranks of big-city mayors around the country. Incumbents are in trouble in several elections, while voters in half a dozen major cities will be selecting new mayors in open races.

There's no overarching set of issues driving local elections this year, but a number of the mayoral contests have similar themes, such as inequities in terms of growth between downtowns and poorer neighborhoods, and public safety complaints -- whether it's concern about rising levels of violent crime or inadequate responses to officer-involved shootings.

The Cut profiles a new web series on five women who are running for office in the US:

In the wake of Trump’s election, many women across the country were galvanized to take a more active role in the political system. Now, a new Topic web series called She’s the Ticket will chronicle the journeys of five women — Jennifer Carroll Foy, Christine Liu Chen, Crystal Murillo, Stacey Abrams, and Laura Moser — who are running for office in state and municipal races across the country. As the first episode points out, while women are more than 50 percent of the population, they comprise less than 25 percent of our elected officials. “We are the flame that will spark the fire for change,” says Jennifer Carroll Foy, who is running for a house delegate seat in Virginia. “If [Trump] can do it then I know I can do it.”

Egypt Today had an interesting piece by Fatma Al-Wahaidy on the use of gender quotas as a tool to increase women's representation - I have included a long excerpt because I think it's important for all of us to absorb this information:

Almost half of the countries across the globe, including developing and developed countries, are using the quota system to create equal representation among genders and to ease the access of women into political power. For example, some European Union (EU) countries like Belgium, France, Slovenia and Spain, introduced gender quotas by law, while some political parties in other EU countries adopted voluntary party quotas for their electoral lists. Also, in the Middle East, most countries apply the gender quota system, including Egypt, Palestine, Tunisia and Jordan.

The idea behind gender quotas was driven by the fact that in many countries around the world, women still don’t have access to education, safety, work, healthcare or political decision making.

But the question remains, do gender quotas really contribute to closing the gender gap and increasing women’s representation?

Opinions on the effectiveness of gender quotas vary based on their implementation and their effect, even among supporters of women’s equality as potential beneficiaries. Despite being controversial, gender quotas are the oldest forms of fighting structural discrimination against women and entrenched privilege built over time. As temporary measures, they help break down social, cultural and political barriers to the normality of women taking up prominent roles. This leads to changing the gender perspective of women’s societal roles beyond the traditional roles and compensates for discriminatory attitudes that undervalue women’s real abilities.

Our terrific allies, the Electoral Reform Society, gathered 100,000 signatures on their petition calling for proportional representation according to the this story. The first past the post voting system in the UK is very similar to to the winner take all system in the United States but they have elected more women in recent elections because of party quotas:

MPs will debate scrapping Westminster’s First Past the Post voting system on Monday 30 October 2017, after a petition calling for proportional representation reached 100,000 signatures.

The debate, scheduled to begin around 4:30pm, will see MPs from across the House discuss the motion: 'To make votes matter, adopt Proportional Representation for UK General Elections'.

The Electoral Reform Society  (ERS) are calling for Westminster to adopt a proportional voting system where seats match votes cast – such as Scotland and Northern Ireland’s Single Transferable Vote.

​And finally, I am thrilled to announce that the iconic cartoonist Sandy Boynton is a fan of Ranked Choice Voting and FairVote! Let me know if you would like a mug, shirt, or set of notecards!

Have a nice weekend!
Cynthia

P.S. There are a a number of municipal elections happening around the US next week but many of us are particularly focused on outcomes for women candidates in Virginia and New Jersey. Representation2020 has been tracking the status of women's representation in both those states which now both get a 'D' on our Gender Parity Index. Stay tuned for an update once the results are in!