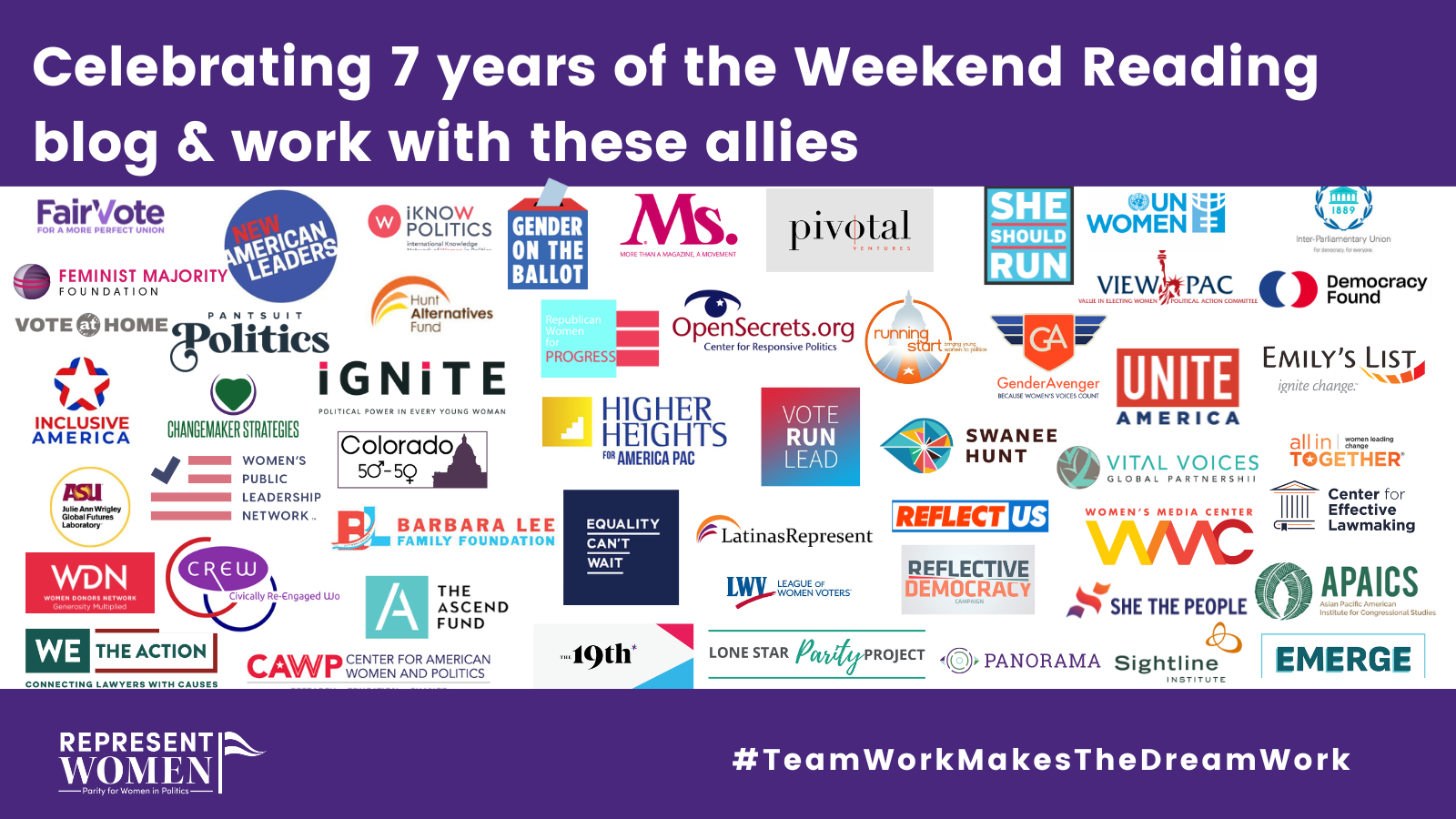 Many of us in the United States are taking a few days to enjoy time with friends and family so this week's blog will be short on content but full of gratitude.

I am grateful for a terrific team, a dedicated board, thoughtful funders, determined advocates, amazing allies, and courageous election administrators and elected officials who are working to build a 21st century democracy grounded in fairness & innovation.

Thanks to the many individuals and organizations for being part of the work to build women's political power.

I started writing this blog in November 2015 with the goal of elevating the work to advance women's representation and leadership in the United States and around the globe. In the years since, the blog has featured commentary on best practices for electing more women, suggested reading by women authors, & reported on electoral outcomes for women around the globe. It's been heartening to hear that the blog has been read and shared and in turn has helped to nurture and build a community of well-informed advocates. And the icing on the cake is that the blog - with all its quirky personality - has been picked up as a regular post by Ms Magazine. A library of the 360 (!!) previous blogs can be found on the (refreshed) RepresentWomen website. 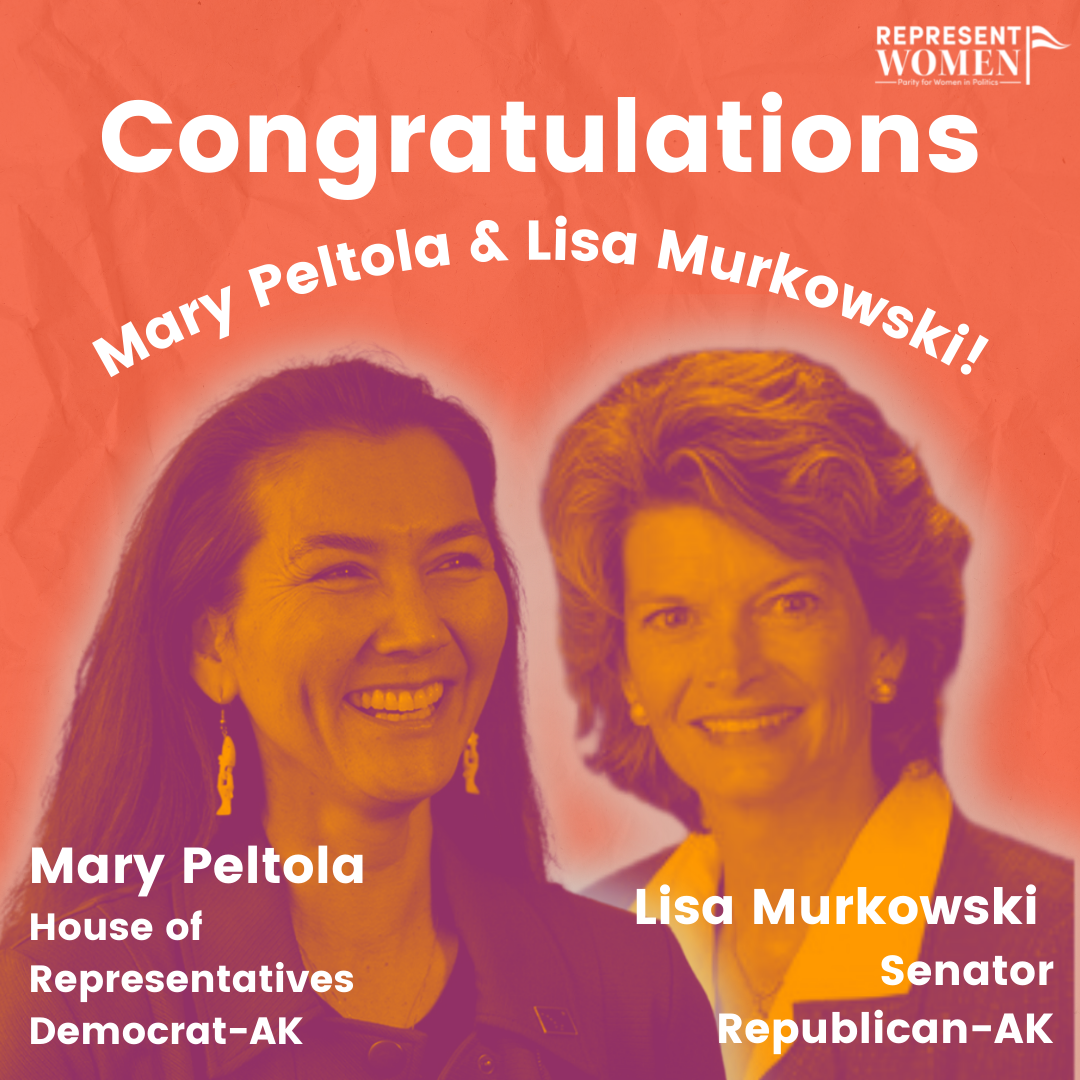 The results are in from several jurisdictions that use Ranked Choice Voting and women have won key races in Alaska - read more here about wins for Lisa Murkowski and Mary Peltola:

Democratic Rep. Mary Peltola on Wednesday became the first Alaska Native to win a full term in Congress, securing reelection along with Republican Sen. Lisa Murkowski, who both defeated challengers endorsed by former president Donald Trump after state officials finished a final round of vote-counting.

Peltola, who made history with her August special election win, and Murkowski, a senator for two decades, led after earlier vote counts. But the centrist lawmakers’ victories were not clinched until Wednesday, when the Alaska Division of Elections redistributed votes under the state’s new ranked-choice voting system.

At a victory party at a downtown Anchorage brewery Wednesday night, Peltola told reporters that Alaskans have given her a “a two-year contract.”

“And I will be happy to work for Alaskans again, as long as they’ll have me,” she said. Her win, she added, shows that Alaskans “wholeheartedly embrace nonpartisanship and working together.” 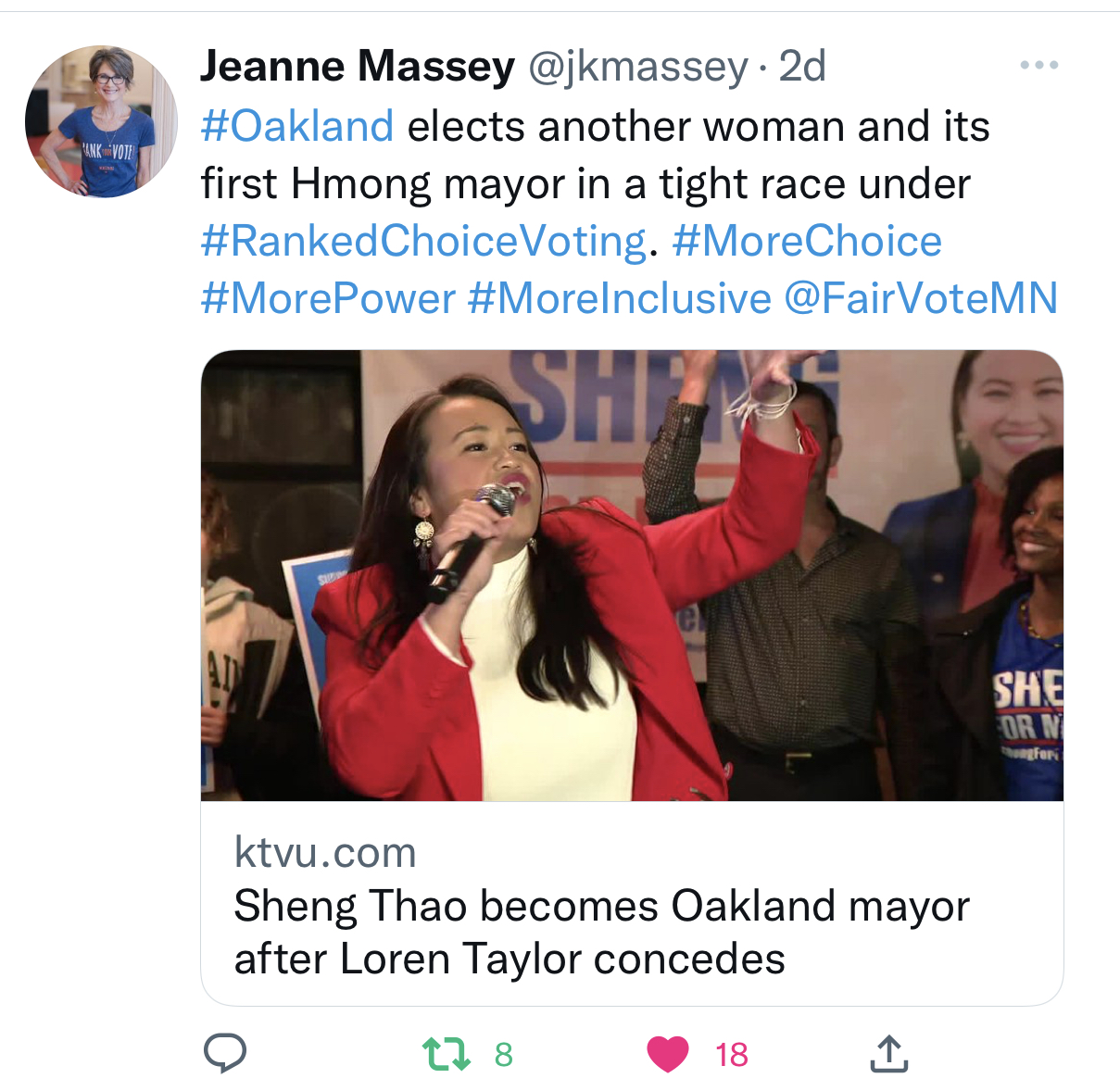 Sheng Thao has won the Oakland mayoral race - the first Hmong woman to do so. See FairVote MN CEO Jeanne Massey's Tweet above and this story on her win:

"I’m very excited to get to work as mayor in January, but I’m also very humbled to be here," Thao said in a statement after the final results were released. Fifteen years ago, she said, "I was living in my car with my baby. I’ve been through a lot to get to this moment, and have had so many people lift me up in order to get here."

Thao is the more progressive of the two candidates and is the first Hmong woman to be mayor of Oakland.

She is also a single mother and domestic violence survivor. She has repeatedly said that she knows what it's like to live paycheck to paycheck.

She was endorsed by many of Oakland's labor unions, including the firefighters' and tenants' unions. 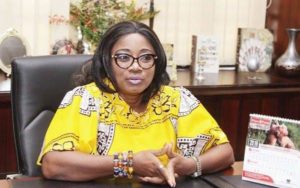 We can now add Sierra Leon to the list of countries who have embraced rule changes and system strategies to increase representation in politics! RepresentWomen's research shows that rule changes like gender balanced party recruitment targets are essential for achieving sustainable gender balance in US politics.

RepresentWomen ally and friend Akshi Chawla spotlights Sierra Leone in the latest edition of her publication, #WomenLead. Last Tuesday, November 15th, Sierra Leonean lawmakers unanimously passed a bill that will introduce a quota to ensure that at least one in three parliamentarians and local councillors are women.

"I'm so overwhelmed," Minister of Gender and Children's Affairs Manty Tarawalli said in parliament after the bill's passing.

She said that in spite of repeated setbacks in drafting and introducing the law -- which she presented to parliament on November 9 -- "the end justifies the means".

It will now go to President Julius Bio to be signed into law...

"We want men and women to work together in making society better," said Rugiatu Rosy Kanu, an opposition MP and deputy chair of a parliamentary committee on gender and children's affairs.

Ibrahim Tawa Conteh, another MP and member of the ruling Sierra Leone People's Party (SLPP), said that 52 percent of Sierra Leone's population is female, "but only 19 women out of 146 lawmakers are in this parliament".

He also called for a law "supportive of all women, not just for the educated" -- namely one enabling better female participation in chieftaincy elections, which is still banned in some parts of the country.

"The government wants to correct the mistakes made in the past for not recognising (women); we want to apologise to all women who suffered discrimination in society," said Matthew Sahr Nyuma, leader of the house and chair of the Information Committee. 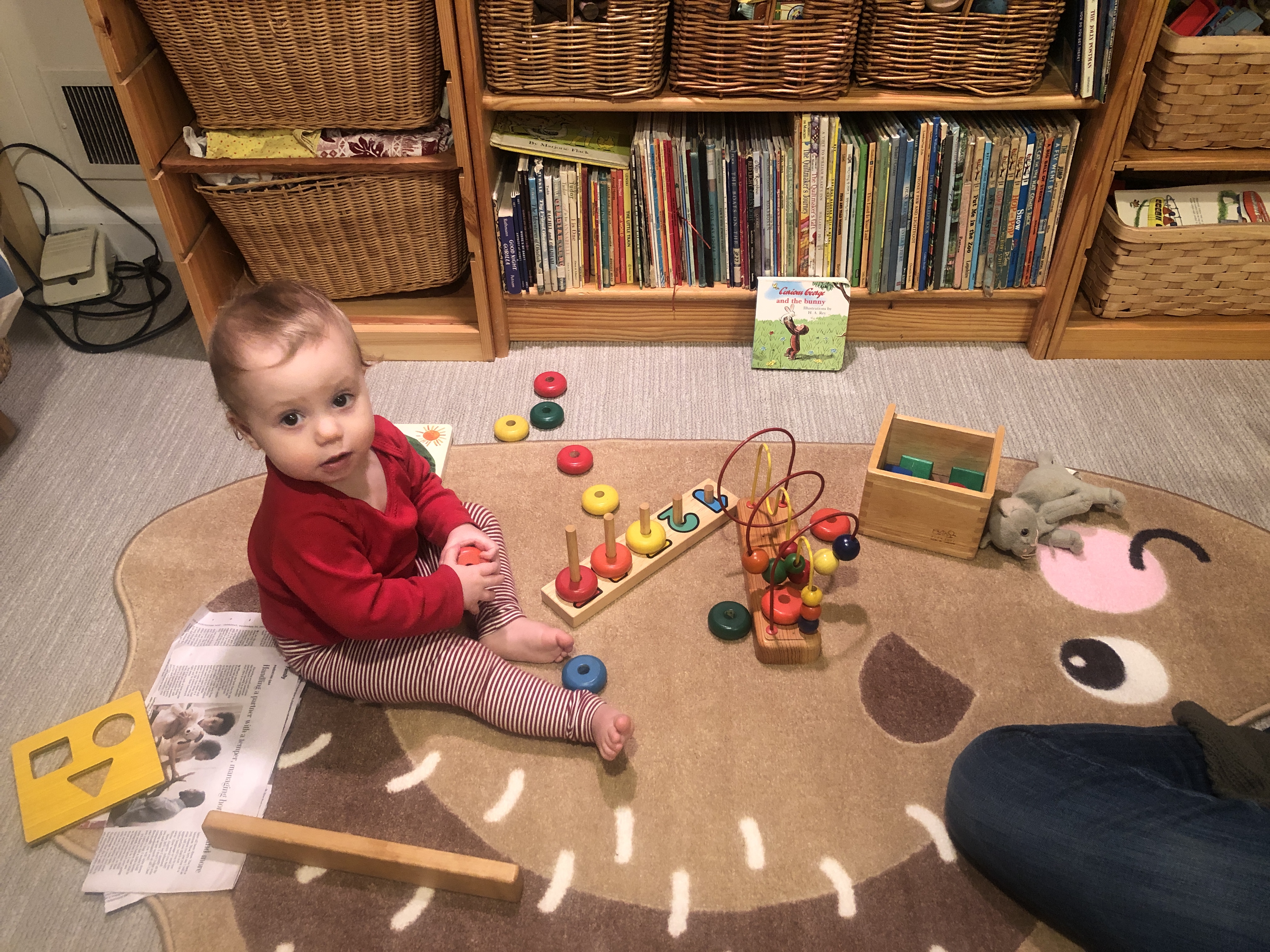 It's been wonderful having a houseful of children, dog, nieces and even a great niece.

Use this link to order a copy of RepresentWomen's 2023 Calendar of Women Leaders!

Have a lovely weekend,

P.S. There is still time to cast your vote in RepresentWomen's Favorite Pie Contest - using ranked choice voting, of course 😀 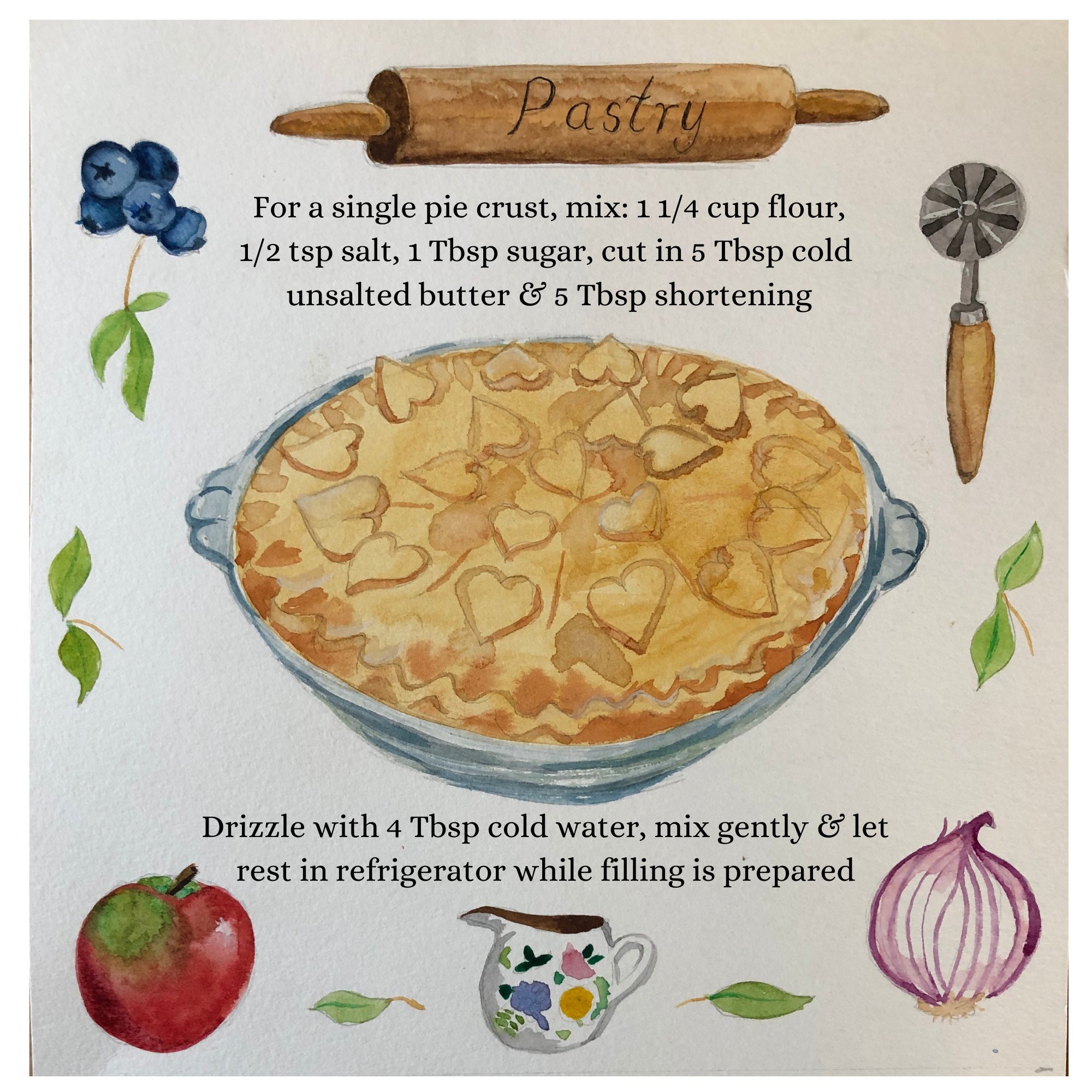