(Shirley Chisholm)
This week marks the 50th anniversary of Shirley Chisholm's historic election to Congress as the first African American woman to serve in the US House of Representatives - now half a century later, women of color comprise a large percentage of the women democrats in the House. 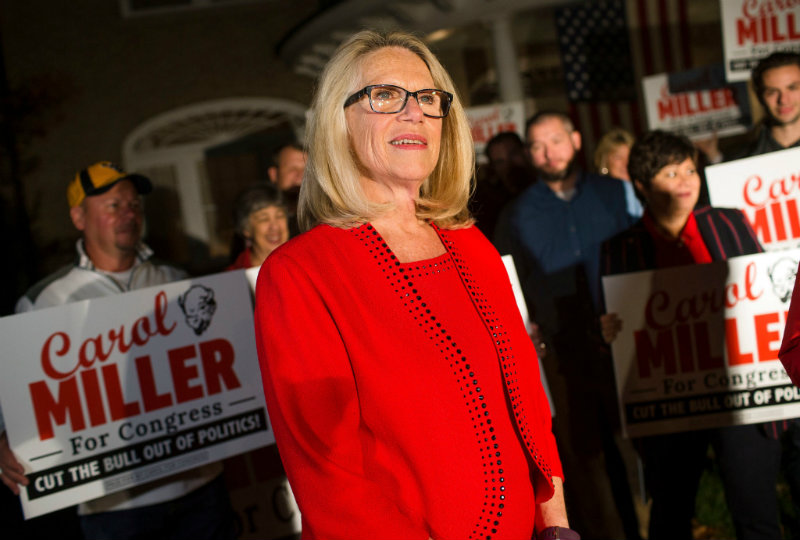 (Carol Miller of West Virginia is the only Republican woman elected to Congress for the first time)
While there will be lots of new, diverse, women in Congress and in state legislatures and that is SUPER EXCITING the vast majority of those elected are democrats: Susan Chira tracks the losses for republican women in The New York Times today:

It is the year of the woman, all right. But only for Democrats.

But that is not all: From Congress to governor to state legislatures, many more Democratic women ran in this cycle than Republican women. And that means fewer Republican women on the bench, gathering experience and credentials to move up to the next level.

As the incoming freshman class of the 116th Congress gathers in Washington this week for orientation, the only Republican woman attending was Carol Miller of West Virginia (she could be joined by a few others whose races are still too close to call).

Meredith Conroy writes on 538 about the partisan breakdown of the women elected to Congress - of the 123 women elected so far - with a few races still being counted - there will be just 19 republicans. I believe that true gender parity requires that all women are represented fairly in government:

According to ABC News projections and FiveThirtyEight analysis, 113 women U.S. House and Senate candidates — from both parties — are expected to be winners.1 And there are eight unresolved races with at least one woman candidate.2 The number of women winners is certain to grow to 115, because both of the major-party candidates in two of the unresolved races are women. In the other six races, two of the women candidates are favored to win — Republicans Cindy Hyde-Smith in Mississippi’s Senate runoff and Mia Love in Utah’s 4th District — according to FiveThirtyEight’s analysis.

Regardless, the 116th Congress will feature the largest class of female legislators ever. But there’s a sharp divide across party lines in this historic first. Of the 113 projected women winners, 98 are Democrats, and 15 are Republicans. (They will be joining 10 female senators who weren’t up for election this year: six Democrats and four Republicans.) It’s a sober reminder that this standout year for women is mostly a standout year for Democratic women. There were two excellent editorials in The New York Times this week that are grounded in conversations about reforms to strengthen our democracy by increasing the numbers of House members and electing them with Ranked Choice Voting in multi-seat districts which elect more women and people of color to office. I know many of us are focused on getting candidates elected in the next election cycle but if we really want to win parity we must digest and engage with medium and long term systems strategies that will help to deliver the representative democracy we all crave:

Multimember districts offer other important benefits, too. When three or five members of Congress all represent the same district, it’s much harder for politicians to gerrymander themselves and their party into permanent power. And experience from the states shows that more women and minorities get elected in multimember districts.

How easily could all of this be done? For starters, Congress would have to reverse a 1967 law prohibiting multimember districts. That law was passed at a time when there was concern that southern whites were taking advantage of multimember districts to dilute the electoral power of African-Americans, who had just secured the right to vote. But that problem goes away with the ranked-choice voting system described above. Congress could implement all these reforms, too — as in the Fair Representation Act, which was introduced in the House last year.

The result of all this is that the vast majority of voters, whether they live in cities, in suburbs or in rural areas, would have someone in power who represents them. This could help foster bipartisanship and compromise, as members of different parties would need to work together on behalf of their district’s voters. After all, both Democrats and Republicans need the potholes to be fixed.

Add in a larger House of Representatives, and you increase the opportunities for voters to be represented more in line with their numbers in society.

And that’s the whole point. When citizens feel that their voice is being heard by government, they’ll be more eager to participate, more likely to vote and more politically engaged over all. That’s what a democracy should look like — and in the long run, it’s the only way a democracy can survive.

Congratulations to a number of allies who held post-election events this week!
VoteRunLead held their #WomenAndPower2018 summit in NYC with a room filled with women from across the ideological spectrum stepping up to run - and get elected - to office! It was fun to be there with the RepresentWomen team and to catch up with Marie Wilson and Rina Shah - both RepresentWomen board members: 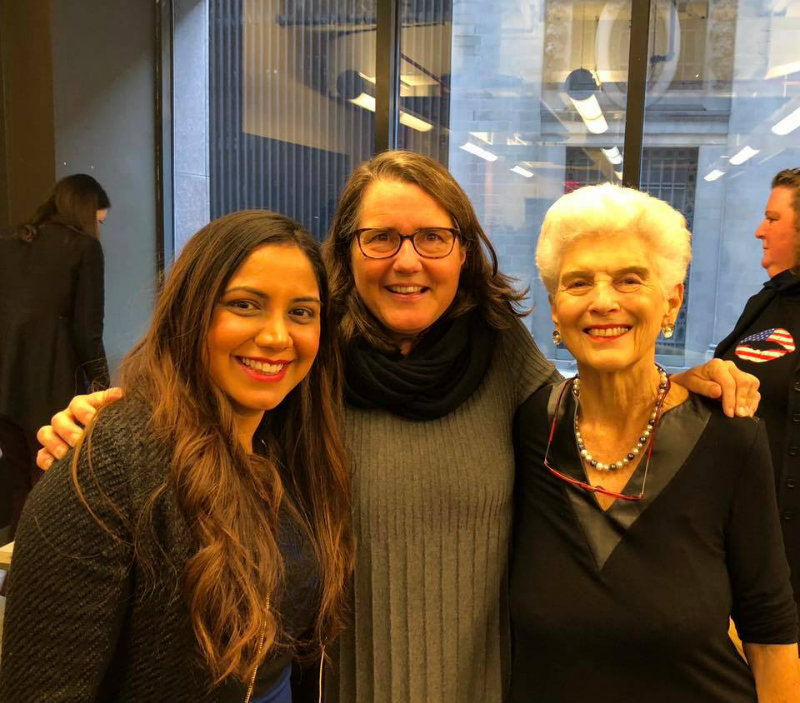 The Barbara Lee Family Foundation hosted an impressive event at the Washington Post offices n Washington, DC complete with a panel of experts on election outcomes and a number of newly-minted women members of Congress who spoke candidly about their impressions of their first week in the Capitol. 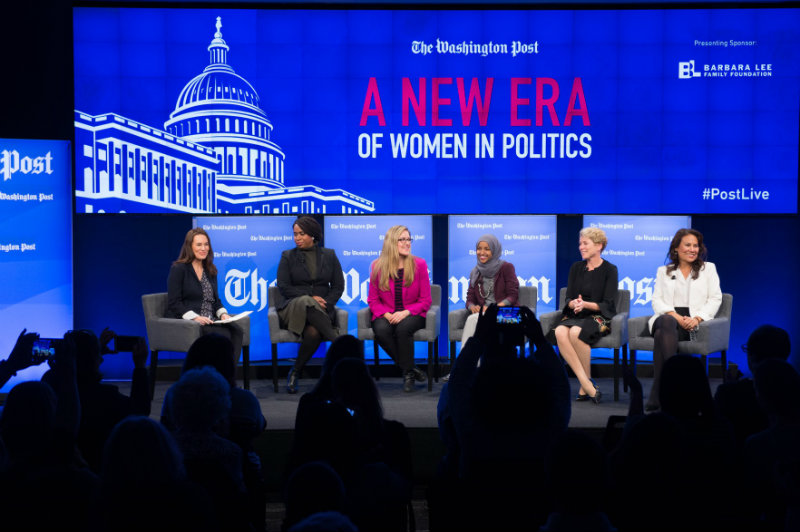 (Newly elected representatives Pressley, Wexton, Omar, Houlahan, and Escobar with moderator Libby Casey)
And for those of you still on the fence about Ranked Choice Voting (hope that's a small number) I think this story about the mayoral election in Phoenix, AZ will convince you that traditional runoff elections are antiquated and expensive and should be replaced with the 'instant runoff' system known widely as Ranked Choice Voting.
Phoenix, AZ Mayor: Phoenix held the first round of its nonpartisan special election on Nov. 7, and Kate Gallego led fellow Democrat Daniel Valenzuela by a wide 45-26 margin. However, because no one took a majority, the two former city councilors will face off again in a runoff on March 12.


The special was called after Democrat Greg Stanton stepped down as mayor in late May to successfully run for Arizona's 9th Congressional District, something he was required to do under the state's resign-to-run law. Gallego and Valenzuela were also required to resign from the city council to run in the special, which they both did. The Arizona Republic writes that while Gallego, who is the former wife of local Democratic Rep. Ruben Gallego, and Valenzuela agree on most issues, they differ when it comes to public financing of sports facilities. Gallego is against it, while Valenzuela is more open to it. Sandra Day O'Connor was also from Arizona and was the first woman to serve on the United States Supreme Court. I wrote this piece to honor her legacy but also to spur a conversation about all the many airports, libraries, bridges, streets, and other landmarks that we should agitate to have named after women to celebrate the approaching centennial of suffrage. I am thinking of using the hashtag #Campaign2Rename as a way to build awareness of the incredibly important role that so, so many women have played in this nation. I don't really have time for this project but please email me 10 names of women you think we should celebrate and I will make a list that we can begin to share with the sorts of people who make these decisions! Here is an excerpt of the piece:

Former Supreme Court Justice Sandra Day O’Connor’s decision to retire due to the onset of Alzheimer’s disease has reminded me of her remarkable career and legacy. Justice O’Connor’s trailblazing life — including the first woman to be majority leader of a state senate and the first woman to serve on the Supreme Court — deserves another first: first American woman to have an airport named in her honor.

When stunned to learn that no American airport is named after a woman, I began calling for Washington Dulles International airport to be renamed for Eleanor Roosevelt. But to me, it is most important to honor women, not score partisan points. Justice O’Connor deserves lasting recognition, both because of her place in history and her efforts to elevate civic learning for all Americans.

Hers is a quintessential American success story. She lived on a rural Arizona ranch as a child, without water or electricity, nine miles from the nearest paved road, yet she earned admission to Stanford and Stanford Law School. Despite being among the law school’s top students, her gender made finding a legal job difficult; she ultimately found a position as a deputy county attorney in San Mateo, California, by agreeing to volunteer and share an office with her secretary.

Stay tuned next week for a election results from Afghanistan and other news from around this precious globe.

With a few results still being tallied we know that there will be 9 women governors, women will make up over 27% of state legislators and at least 23% of the House of Representatives - putting us at 77th place among nations for women's representation - right behind Montenegro, Cabo Verde, and Bulgaria. It was a year of many milestones but we have still have a long way to go my friends.
Cynthia
P.S. I got to take a short elevator ride with Sen Gillibrand in NYC and she signed her book and told me to 'Be Heard' - I think that's good advice for all of us....