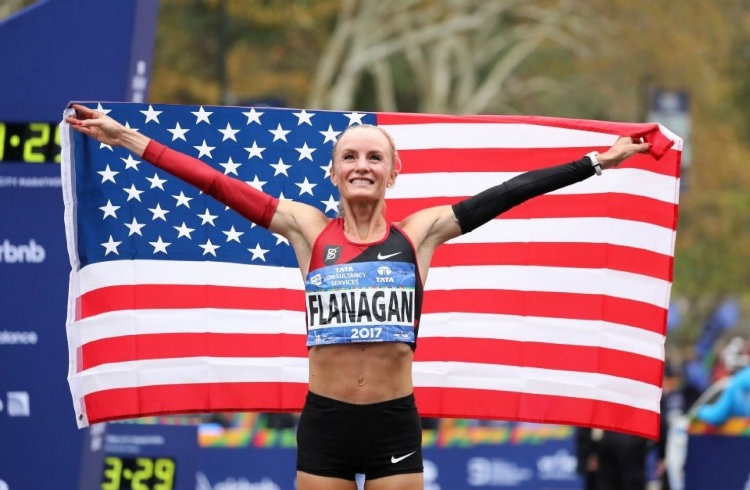 ​​The New York Times reported on the first American woman to win the NYC marathon in 40 years - advancing women's leadership on all fronts!

Women candidates made great strides in Tuesday's elections - both in record numbers of candidates - thanks to the great work of EmergeAmerica & its terrific state affiliates, Higher Heights, Latinas Represent and VoteRunLead among many others - and a record number of wins! The Center for American Women and Politics tallied the available results on their website. Ballotpedia tracks state legislative special elections, mayoral races, and municipal races as well.

Women of color won key races for:
While democratic women picked up a record number of seats - with several still to be determined through recounts and runoffs - only two republican women picked up seats in state legislatures: Serena DiMason in NJ & Emily Brewer in VA. It goes without saying, though I will say it again, that true parity requires electing women from across the partisan and geographic spectrum - we still have work to do! 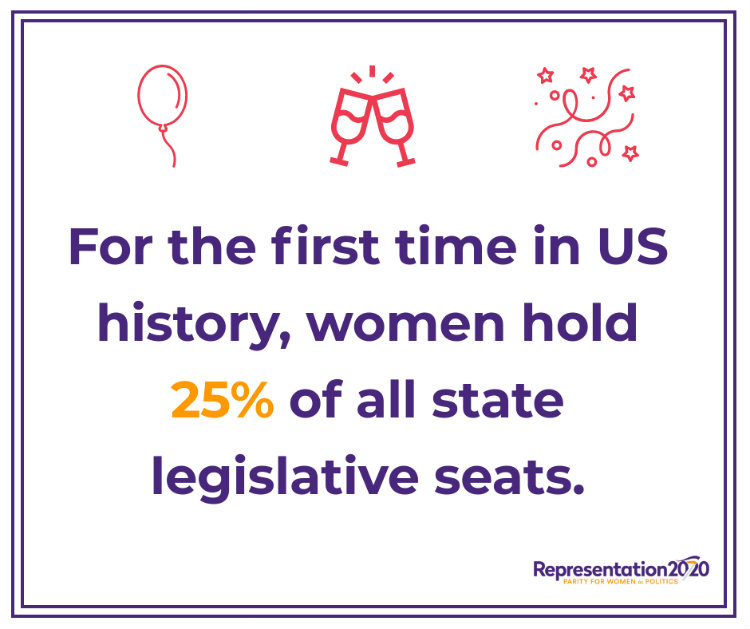 There were of course many stories on the election outcomes - here is a small sample:
The Barbara Lee Family Foundation had a terrific webinar yesterday featuring their new research on women running for office "Opportunity Knocks" - use this link to watch if you missed it!
A number of cities used ranked choice voting in elections on Tuesday with very encouraging results including record high turnout in every jurisdiction, many diverse candidates who ran & won, and the vast majority of voters using all of their rankings to express their preferences.
There is a terrific video featuring Minneapolis candidates & advocates including Jeanne Massey, Elizabeth Glidden, mayor-elect Jacob, and others that provides some great texture to the advantages of ranked choice voting systems.
I hope that those of you with international expertise can help us make corrections and updates to this spreadsheet that the Representation2020 team has created. We found pieces of  information at IDEA, the Inter-Parliamentary Union, and the Quota Project but have not found a source that combines the percentage of women elected, the type of voting system used, and the variety of quota - if any - in one place. Once we fill in the missing information we will design some infographics to make the data more digestible than the images below. Please send all corrections & comments to Toni Gingerelli - [email protected].
I hope to see some of you on Monday evening in New York City as FairVote celebrates our 25th anniversary by honoring Champions of Democracy Hendrik Hertzberg, Lani Guinier, Reihan Salam, T Clark Weymouth, Jeanne Massey, NY legislators Liz Krueger & Brian Kavanagh. Presenters include Jonathan Alter, Rashad Robinson, Rep Don Beyer, & a host of others! Please let me know if you would like to come and I will add you as my guest!
And Congratulations to She Should Run for a really terrific event on Monday complete with women representatives, business leaders, prospective candidates, and others from across the partisan spectrum!
I bet some of you are planning to attend VoteRunLead's terrific Run As You Are training in Minneapolis next week - please be on the look out for Representation2020 staffer Toni Gingerelli who will be attending and ready to talk about rules and systems changes, that complement current strategies, to elect more women faster!

I will end with this quota from Rashad Robinson, Director of Color of Change & former FairVote staffer who will be presenting Lani Guinier with a Champion of Democracy Award at FairVote's 25th anniversary celebration - we must seize this power to change the rules and run!


"Power is the ability to change the rules"
P.S. Please excuse this US-centric chart but we couldn't fit any more countries on these two pages! 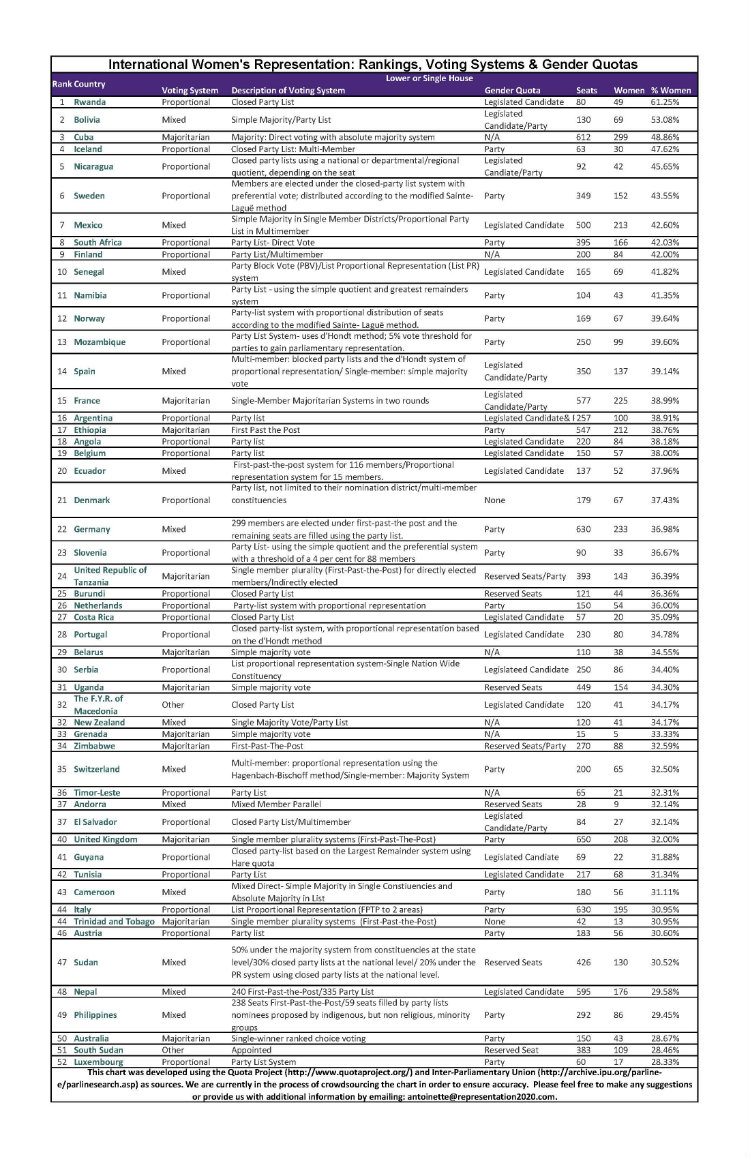 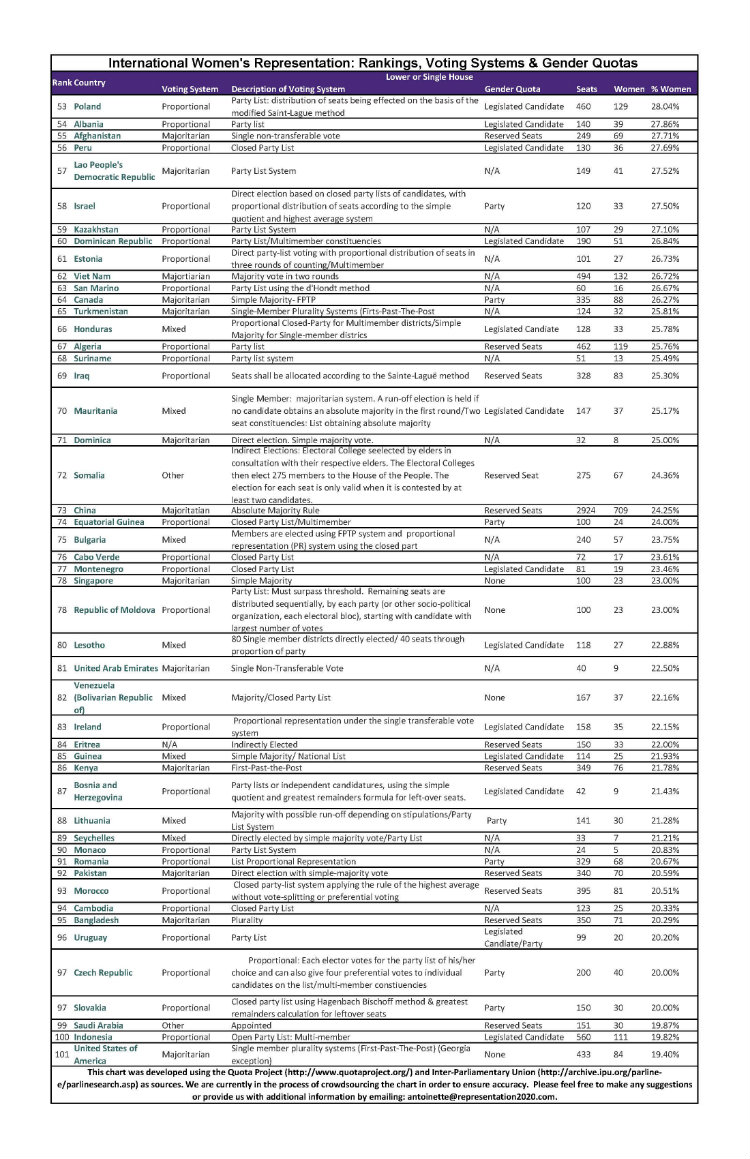