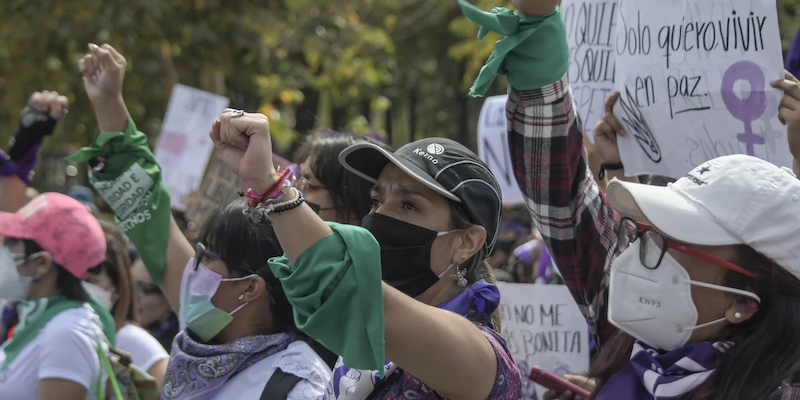 Dear friends,
Tuesday marked the day, each year, that is set aside to celebrate women, so in that spirit, this week's blog will highlight some perspectives on international women's representation.
RepresentWomen's Strategic Partnerships Manager Katie Usalis wrote this terrific piece for The Fulcrum on her reflections on International Women's Day:
March 8 was International Women’s Day, established by our foremothers in 1910 as a day for women to join together and fight for equal rights. Although it has essentially evolved into International Virtue Signaling Day by governments, corporations and groups across the globe that aren’t actually doing much for women’s rights, I think it is an important opportunity to reflect on the status of women.

The valedictorian of gender balance is …

Thanks to the hard work of the Inter-Parliamentary Union, we know there are continued global trends towards gender balance. Since 1995, the global average of women in elected positions has increased from 11 percent to 26 percent. While still a far cry from gender balance, it’s great news that we’re headed in the right direction. Also exciting is that the Americas lead the way in the race towards gender balance, with 34 percent average regional representation – the highest share of representation in the world! 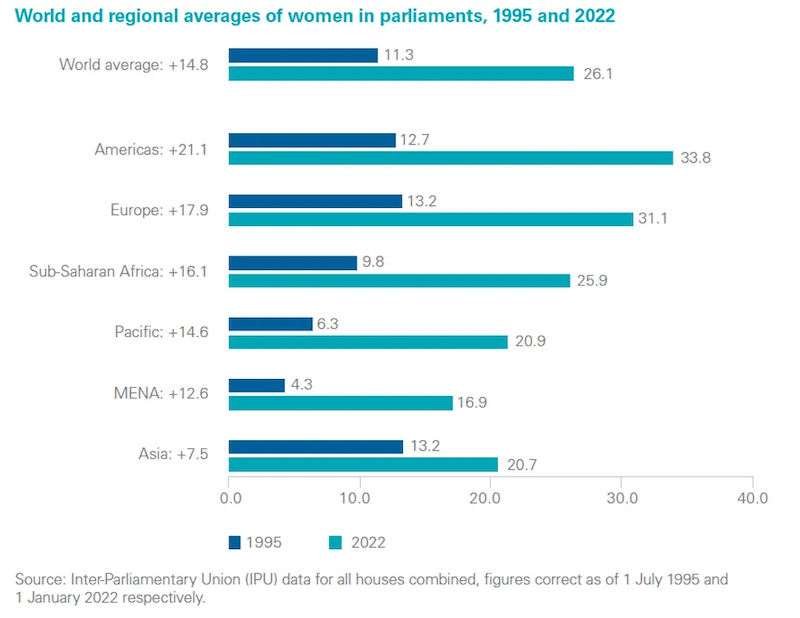 When I dug a bit deeper into these numbers, I realized pretty quickly that these gains in representation in the Americas are all thanks to our neighbors to the south: Mexico has 50 percent women in its government, Costa Rica has 46 percent, Argentina is at 45 percent … the list goes on. On top of that, Peru’s representation rates jumped by 14 percent and Chile’s by 13 percent — in one year! And the United States? In 2021, we dropped to 72nd in our global ranking for gender parity with a staggering average of 26 percent representation in Congress.
The United States is that classmate who actually brings the average down, and who all the other hardworking students glare at. The fact is, average representation rates in the Americas would be even higher without us.
The tools for success

So how are these countries achieving gender balance, and in record time? Oh I know, I know. It’s because the women running for office are more qualified and there’s just less gender bias there.

The democratic countries in the Americas that have achieved at least 40 percent representation in government have one thing in common: All of them have embraced policy tools that get at the root of gender imbalance. Most of them have adopted innovative gender quotas and modernized electoral systems that use proportional representation rather than winner-take-all voting. These system upgrades dismantle outdated structures fortified by built-in mechanisms that protect the status quo and keep diverse women out of office. These system upgrades clear out the cobwebs and create space for a 21st century democracy. 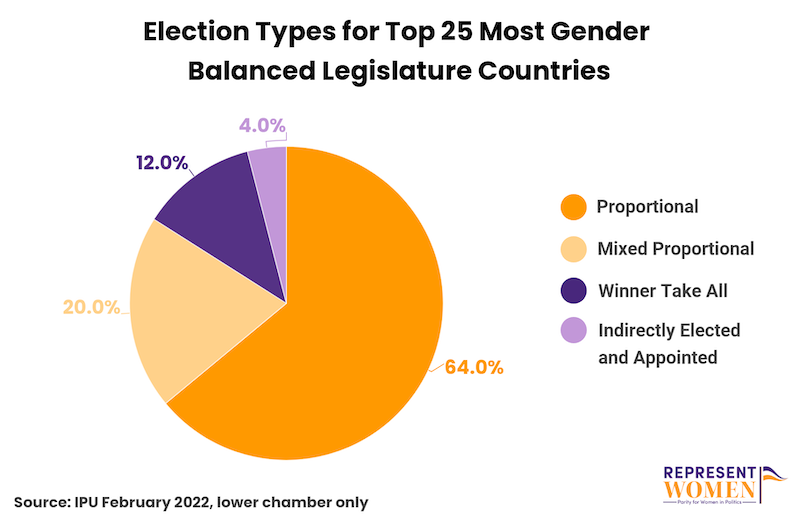 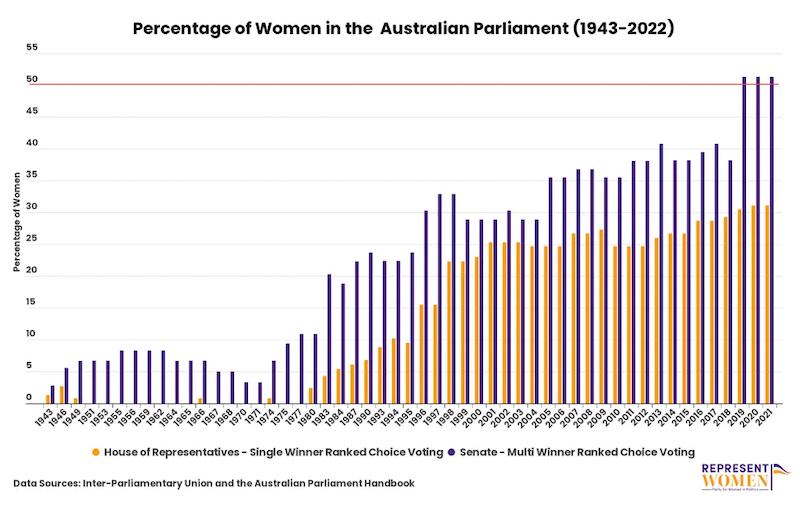 The urgency cannot be understated

Our current system was designed to protect the power of those already in office, and our history and culture has dictated that those incumbents are vastly white and male. To fan the flames of the incumbency advantage, redistricting has yet again shrunk the number of competitive districts, which we are already seeing the effects of in this year’s midterm elections. Add to this the fact that the United States is no longer considered a “full democracy,” and the urgency and necessity of reform cannot be overstated. 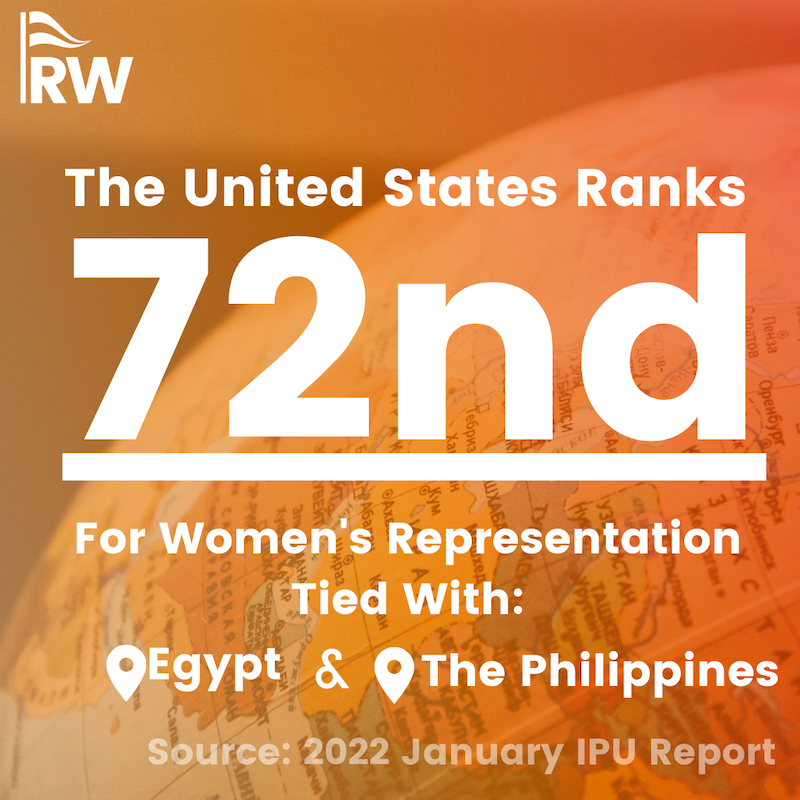 It is evident that we need the best and the brightest to tackle these challenges facing our democracy, and cutting women out of the equation severely limits the candidate pool. To overcome powerful systemic barriers like these we need powerful systems change. As seen in Australia, fair representation voting will produce continued progress and lasting effects. Add other critical reforms like expanding the House and we will create more open seats that women also have a greater chance of winning.

It’s time we clear out the cobwebs and bring our democracy into the 21st century. 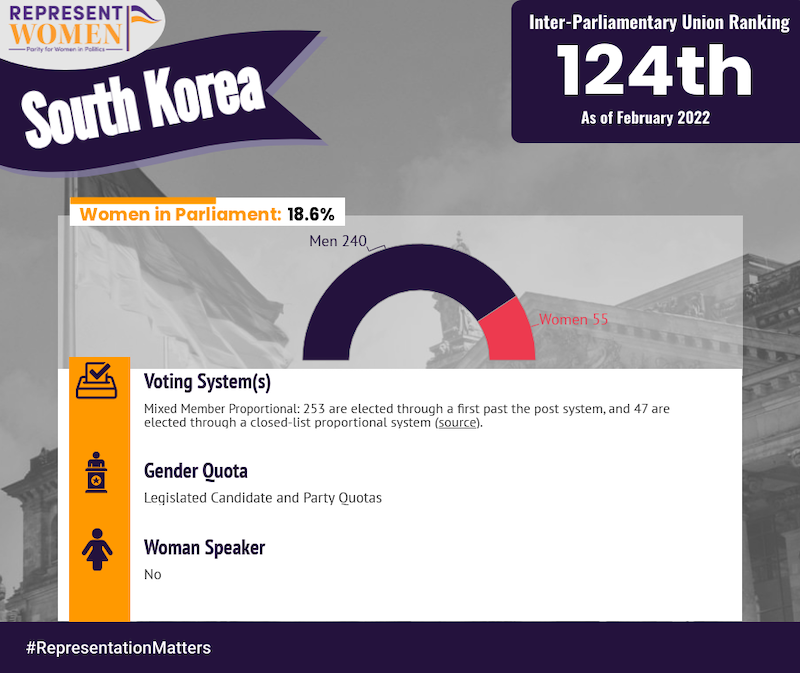 Women are under-represented in politics in South Korea (read more about the details in this piece by former RepresentWomen intern Cameryn Chan) but this week's election of an ultra-conservative may undermine women's rights even further as this article in The Washington Post warns. And just as a reminder about the importance of ranked choice voting, the winning candidate received a plurality of the vote after a liberal and a progressive candidate split the majority vote - just like the 2000 presidential election in the United States:
When Kim Ju-hee was at nursing school, her instructor told the class that “a nurse’s pretty face is part of the service that she provides,” which even for a woman from the conservative Korean city of Daegu was a bit hard to take.

Once Kim began working, she experienced constant sexual harassment and discrimination, prompting her to seek out the support of other women undergoing similar experiences. The 27-year-old then began to fight back, taking on night shifts so that she could be an activist by day, organizing protests against misogyny.

But she and other female activists in South Korea face an uphill battle, especially with a rising male “anti-feminist” movement, whose members stage counter-protests mocking and threatening the women — even as they are increasingly being courted by politicians.
A gender war has erupted among young South Koreans in their 20s, driven by conflicting perceptions of what it means to be truly equal in today’s society. A slow boil of aggrieved male backlash nurtured in the distant corners of angry Internet forums and private Discord channels has erupted to confront a galvanized women’s movement that is challenging decades of traditional attitudes — and the women are losing, experts warn. 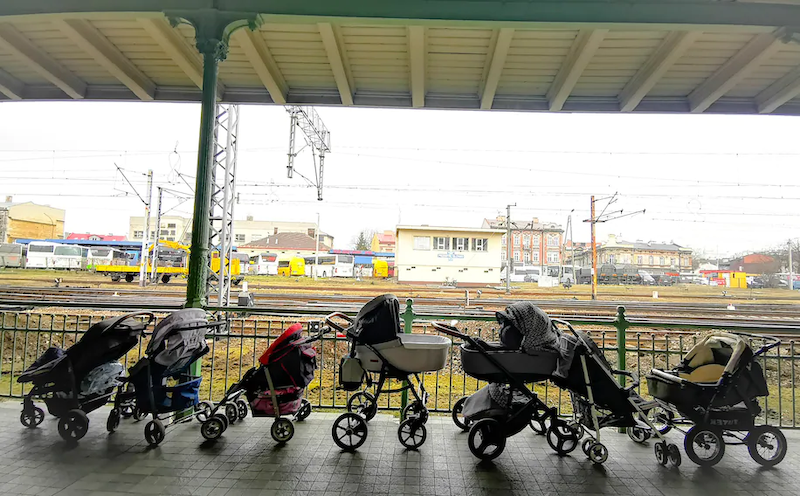 Strollers for refugees and their babies fleeing the conflict from neighboring Ukraine were left at the train station in Przemysl, Poland. (Francesco Malavolta/AP)
I was so touched by this column by Monica Hesse in The Washington Post that is a reminder of the role that many women play in keeping our global community going - just imagine if we had these same instincts represented in government:
More than a million Ukrainian refugees have now poured into neighboring Poland, most of them women and children. When Polish mothers learned of this, it seems, they went to the railway stations and border crossings where the refugees were arriving, and they began dropping off baby strollers. A photojournalist covering the conflict snapped a picture of seven empty ones waiting at the Przemysl Glowny station. In other images at other stations the strollers are filled with blankets and baby necessities. Some strollers look newer and some have a bald-tire scruffiness to them — these strollers have seen some miles, they’ve carried some exhausted young legs.

The strollers on the train platforms in Poland are needed because Ukrainian mothers arrived in Poland with only the clothes on their backs and the children in their arms. The trains or buses that evacuated them were too crowded for these women to bring their own strollers, perhaps, or maybe the women were forced to leave too quickly to have time to fetch them.

Or maybe it’s this: If you are a Ukrainian mother, maybe when an explosive device turns your neighborhood into rubble, when you see your fellow citizens fall in the street, when you learn exactly what munitions explosions smell like — maybe when that happens, your instinct is to grab your baby and hold him close to your own body as you run for your life, not to push him away in a pram.

The strollers on the train platforms in Poland are a symbol of what women know about war and their place in it. These Ukrainian mothers have arrived without husbands or partners because the men of Ukraine, ages 18 to 60, are prohibited from leaving. The men are staying to fight in the army. That is what men have always done in wars: They have fought and died. 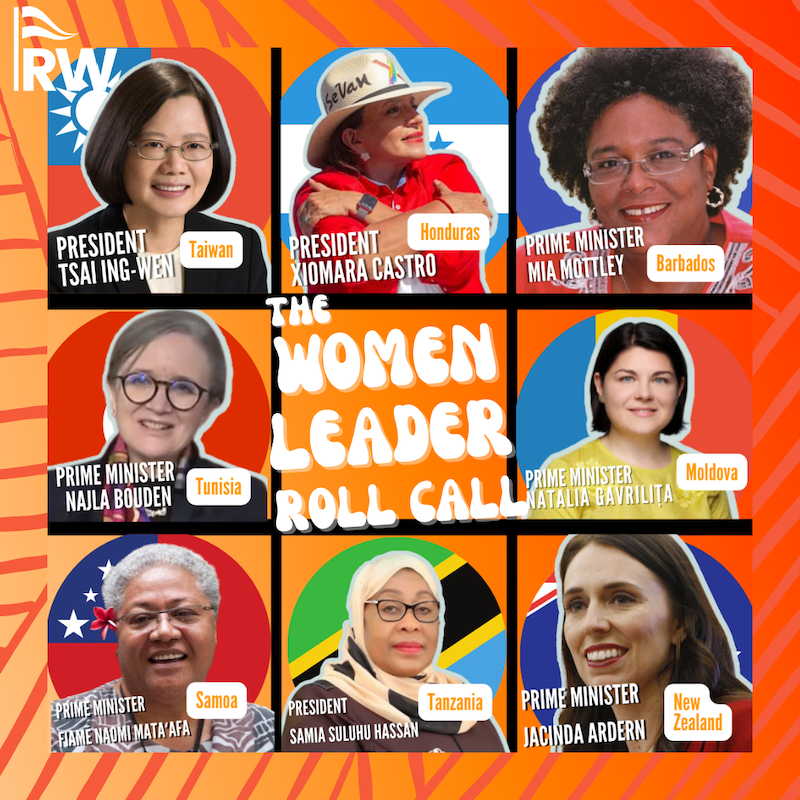 While the United States hasn't yet elected a woman head of state many countries have - we celebrate these women today and every day! Read more about women heads of state at UN Women and at Women Political Leaders. There are of course millions of women who are qualified but we must break the cultural, structural, and logistical barriers they face as candidates and elected officials in order for them to lead. 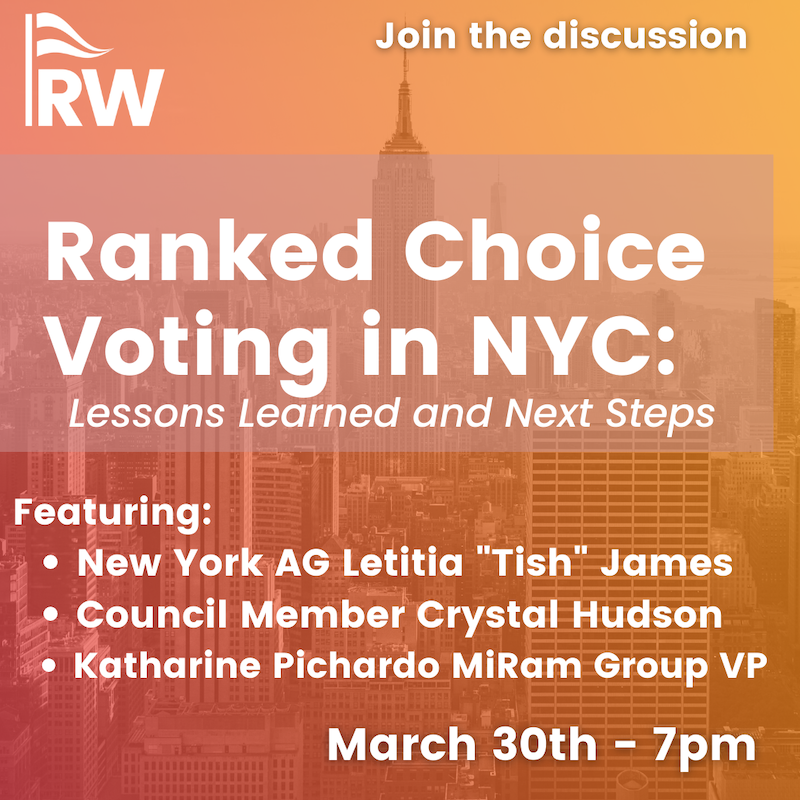 And if you'd like to learn more about how ranked choice voting is electing more women to office please join us on March 30th at 7pm to hear from NY Attorney General Tish James, NYC Council Member Crystal Hudson, MiRam Group VP Katharine Pichardo and others about this transformative reform! 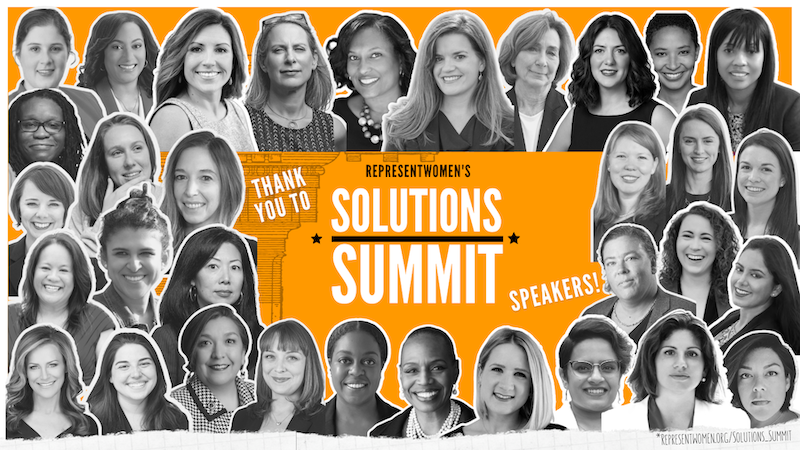 We've had an amazing inaugural #DemocracySolutionsSummit this week with over 45 women leaders discussing some of the most pressing issues facing our democracy. I am so grateful to the experts, the RepresentWomen teammates, and the participants that made the Summit such a success. Thanks all!
Until next week,
Cynthia
P.S. This year marks the celebration of the Harriet Tubman bicentennial and terrific ally Barbara Howard is focused on honoring her legacy with her image on the $20 dollar bill - I hope you will sign & share the petition. 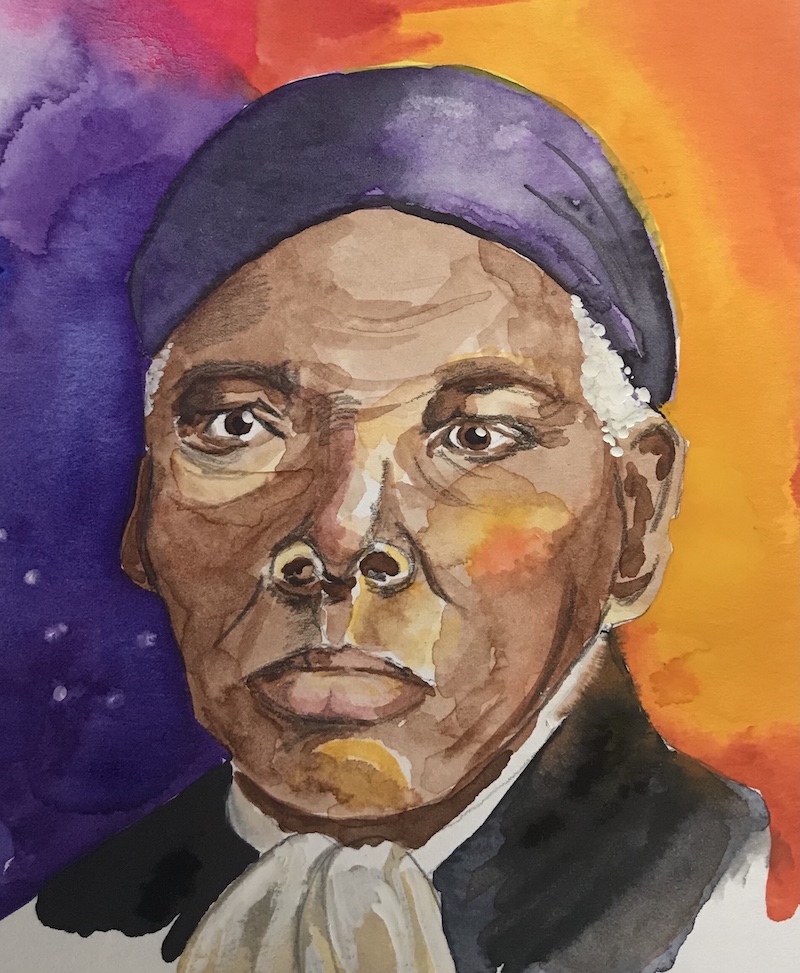