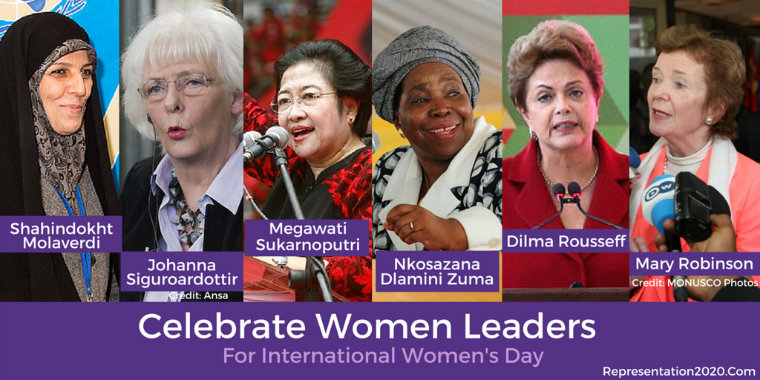 There were many great celebrations of International Women's Day this week - this Google Doodle - struck a a hopeful chord.

Political Parity conducted a webinar this week entitled: Sex, Bipartisanship, and Collaboration in the U.S. Congress.

The London School of Economics and Political Science published a terrific blog: "Merit vs Equality? The Argument that Gender Quotas Violate Meritocracy is Based on Fallacies."

The Center for American Women and Politics has partnered with GenderAvenger and the Women's Media Center to track the gender balance of analysts covering the presidential campaign. CNN scored higher than other networks in the first week.

Representation2020 created a map based on updated Inter Parliamentary Union data which ranks the United States 95th in the world for women's representation - the 94 nations that rank above the U.S. have employed structural solutions to move faster toward parity.

The World Post featured a story this week on Irina Bokova from Bulgaria who is the leading candidate to assume the position of U.N. secretary-general. There are six candidates for the position - two of whom are women.

The newly elected (feminist) prime minister of Canada announced that Canadian currency will feature the image of a woman by 2018, while the National Film Board of Canada committed 50% of its production budget to films by women. During his visit to Washington, DC this he exuded charm and at a Canada 2020 event said "It can't just be women who are feminist. We men need to be feminists too."

She Should Run released See Joan Run on International Women's Day - read more about this clever parody and order your very own copy and one to share!

A new book entitled Gender Quotas and Democratic Participation - looks like a must read - "Since the 1970s, quotas for female political candidates in elections have proliferated worldwide. Beyond increasing the numbers of women in high-level elected bodies and, thereby, women’s political representation, advocates claim that quotas foster gender-equal participation in democracy and create female role models. According to this reasoning, quotas also overcome barriers to women’s political participation, especially discriminatory practices in the selection of electoral candidates."