Stamps issued by the United States Postal Service to celebrate the 50th anniversary of Title IX
Dear fans of gender balance in politics,
This month marks the 50th anniversary of Title IX that prohibited sex-based discrimination in any educational program that receives financial support from the federal government. Adoption of Title IX has increased opportunities for women and girls in academic settings but there has been mixed success for women & girls in sports according to this story in FiveThirtyEight by Neil Paine:

The historical impact of Title IX extends far beyond the reaches of sports. The landmark legislation, which prohibited sex-based discrimination in federally funded schools and education programs, was passed 50 years ago this month. It coincided with enormous growth in educational attainment for American women1 and has been applied toward reducing sexual violence on campus and promoting transgender rights in recent years. But athletics have been at the center of Title IX from the very beginning. (Even the fight around it used sports as a battleground: Witness the early attempt by Sen. John Tower of Texas to exempt high-profile men’s sports from counting toward Title IX compliance.)2 Title IX challenged the long-standing notion that sports belonged to men — and men only. And its effects were felt both in the short term and over the half-century that has followed.

In 1971, the year before Title IX’s passage, fewer than 300,000 girls participated in sports at the high school level in the U.S., according to data from the National Federation of State High School Associations. That number represented just 8 percent of the boys participating in sports at that time, highlighting how few athletic opportunities existed for girls — a number reflected in college-level sports participation rates then as well. In the 1966-67 sports season, around 15,000 women participated in college sports at NCAA institutions (including recreational sports), or about 10 percent of the participation number for men. While college enrollment also skewed male in that era — men represented 59 percent of total postsecondary fall enrollment in 1970 — it was clear that women were severely underrepresented in the athletic ranks prior to Title IX’s passage. 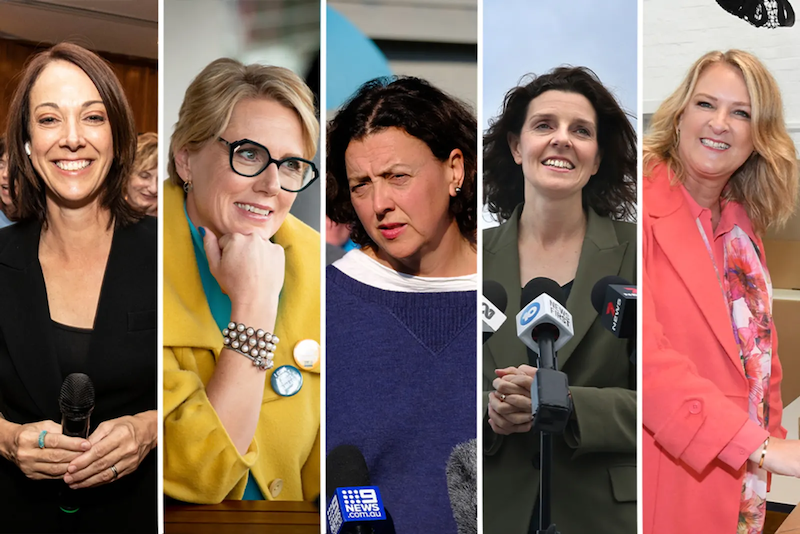 The votes have been tallied and it's official: there will be a record number of women serving in the Australian parliament - many of whom were elected to the lower house via ranked choice voting. While a number of women ran and won as "teal independents" -- read more on their races on Democracy SOS -- a number of traditional parties struggled to attract women voters as this story in the Sydney Morning Herald reports:
A record number of women will take their seats in the House of Representatives when the 47th parliament sits for the first time in July, but representation in the Liberal Party has gone backwards as it grapples with how to regain the faith of female voters.

Women will comprise 38 per cent of the chamber in the new parliament – the highest ever proportion on record – after 58 women were elected to the lower house, including 19 first-term MPs....

The election result has prompted a renewed round of soul-searching within the Liberal Party over how to better connect with women, as female voters steered clear of the party and five Liberal men were ousted by “teal” independents who campaigned heavily on gender equality. 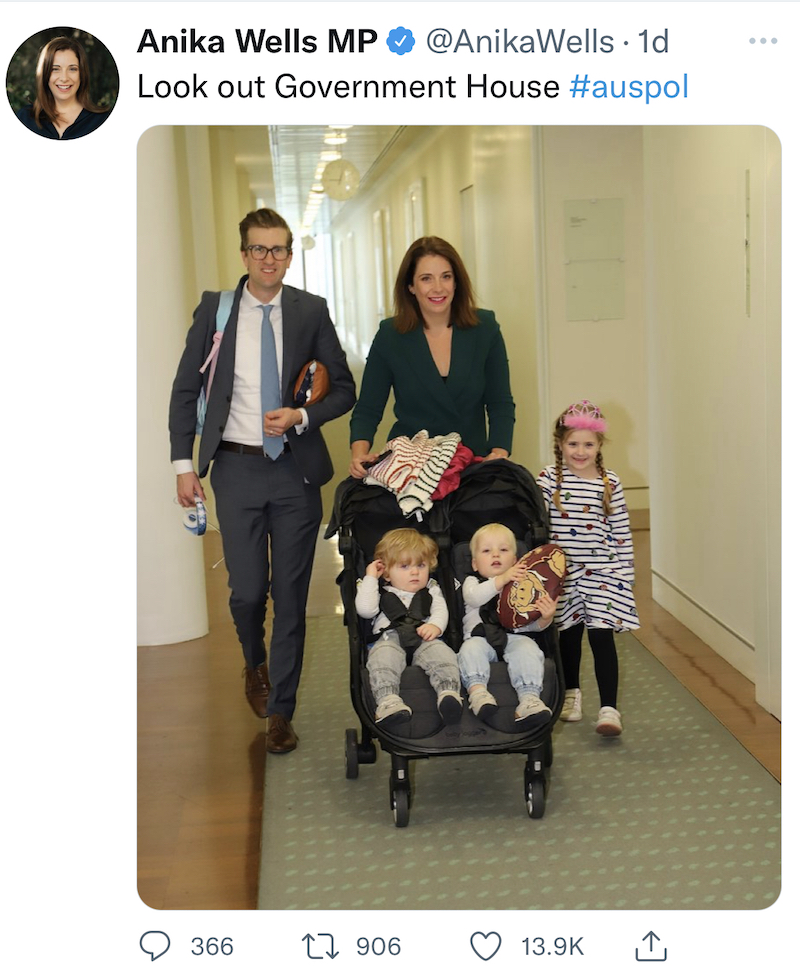 A record number of women will also be serving on Prime Minister Anthony Albanese's new cabinet in Australia according to this piece in The Guardian. This article in the The Conversation -- that quotes the amazing Karen Beckwith -- explores diversity within the new cabinet:
Prime Minister Anthony Albanese’s first cabinet is Australia’s most diverse ever. Not only do women comprise ten of 23 cabinet ministers (or about 43%), many have diverse race, ethnic and religious backgrounds.

A photo of the incoming Minister for Aged Care and for Sport Anika Wells walking through Parliament House with her three young children seems emblematic of the changes brought by the election.

While falling short of 50/50 representations, this is a cabinet that better represents the country it serves. It is widely welcomed and long overdue...
Claire Annesley’s book with Karen Beckwith, and Susan Franceschet, Cabinets, Ministers and Gender, shows significant changes in women’s representation often result from pre-election pledges made by a leader. For example, Canadian Prime Minister Justin Trudeau pledged a parity cabinet ahead of his election in 2015 and achieved this goal. The pledge is a powerful tool because many leaders are fully empowered to make their ministerial selections. 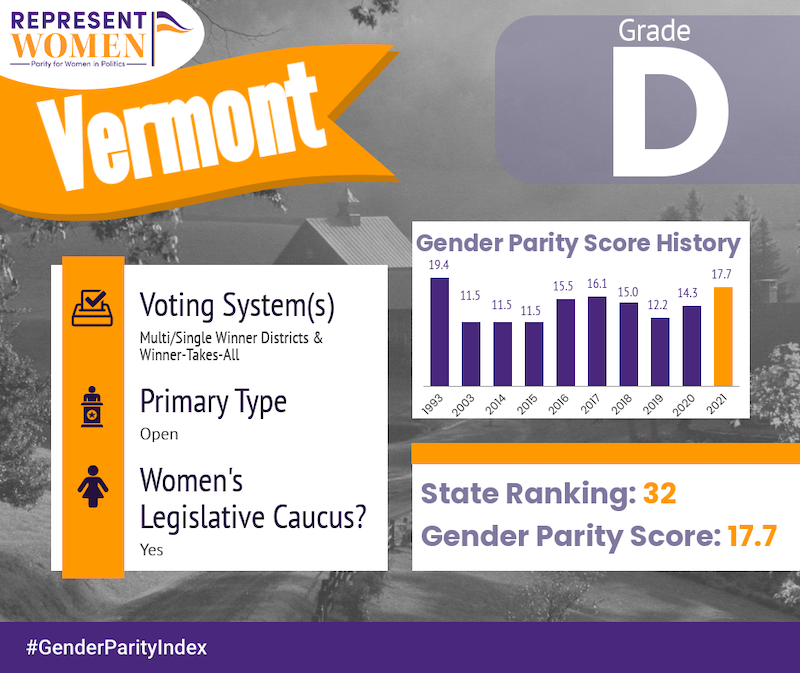 Vermont's scores on RepresentWomen's Gender Parity Index - support is growing in the Vermont legislature for ranked choice voting.
Vermont is the only state that has never had a woman member of Congress but that may well change this year according this story from AP:
With a rare opening this fall in its congressional delegation, Vermont appears poised to lose its distinction as the only state that has never been represented by a woman in Washington.

Three women, including Lt. Gov. Molly Gray and Senate President Pro Tempore Becca Balint, are among the Democrats competing in the Aug. 9 primary for the seat being vacated by the state’s lone U.S. House member, Democrat Peter Welch, who is trying to move to the Senate. The two Republican candidates registered to run in the midterm elections are also women.

Given Vermont’s liberal reputation, it might seem strange that it would be the last state to send a woman to Congress. But Vermont’s tiny population makes it one of a handful of states with the smallest possible congressional delegation — two senators and one House member. And like many states, Vermont has traditionally reelected its incumbents, who have happened to be white men who have ended up serving for extraordinarily long stretches. That includes Democrat Patrick Leahy, who was first elected in 1974 and is the fourth-longest-serving senator in history. 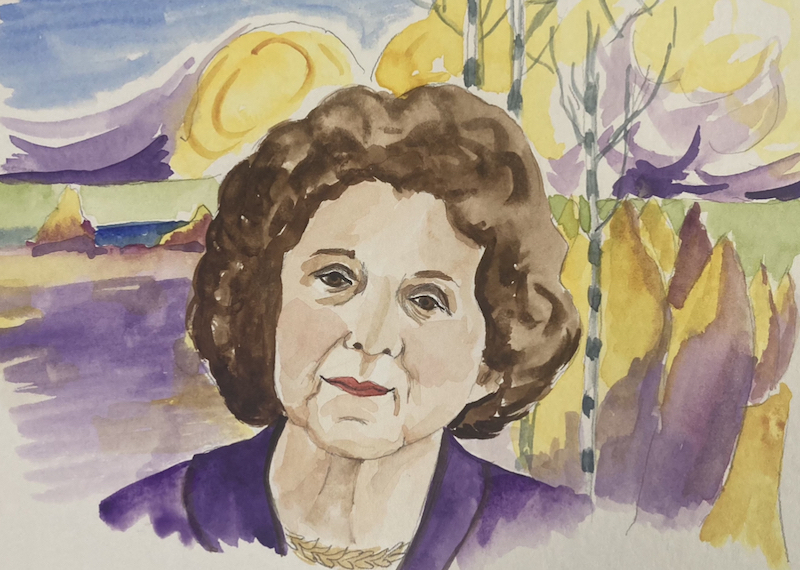 Legendary environmentalist Rachel Carson, painted by Melanie Humble
Rachel's Action Network, named in honor of Rachel Carson, has released When Women Lead that tracks the voting records of women in Congress on issues related to the environment. This incredible resource underscores the importance of electing more women to office if we are to make substantive progress on addressing the climate crisis:

In previous iterations of our report When Women Lead (in 2003 and 2011), we analyzed the voting records of federal legislators going back to 1983 using League of Conservation Voters (LCV) Environmental Scorecard data. We found that women in Congress vote for legislation supporting clean air, clean water, renewable energy, climate action, and public health much more often than their male counterparts (and similarly vote more often against legislation that would roll back these protections).

This update brings our analysis up to the present and looks further into the past. After comparing annual LCV scores each year from 1972-2021, we again found that women legislators vote for environmental protections more often than their male counterparts in both the House and Senate.

Climate change, pollution, food and energy insecurity, chemical safety, and biodiversity loss have become urgent global concerns that threaten lives and livelihoods in the US. If we want to make progress on protecting the environment and public health, we should help elect more women to public office, and support them during their tenure. 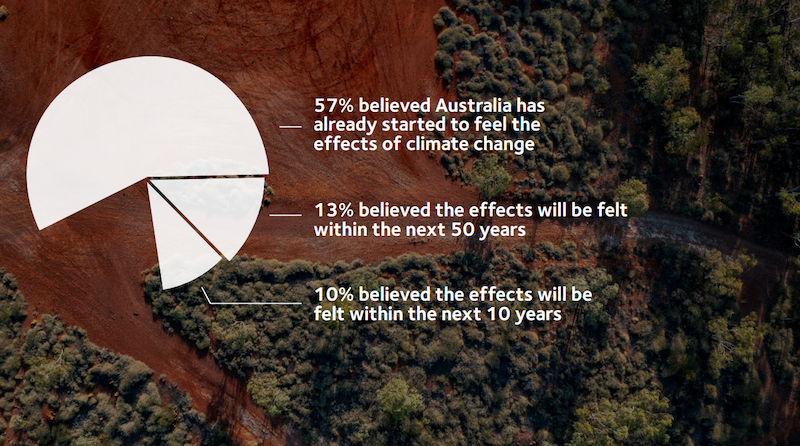 Results of a climate survey from Griffith University
Griffith University surveyed Australians about their views on climate change and found that the majority polled support more aggressive action to address the climate crisis. I mention this to highlight the role of Australia's ranked voting system and its power to elect representatives who align with majority opinion. In the United States our antiquated winner take all voting system prevents action on policies that majorities of Americans support from gun safety measures, to support for caregivers, to protecting reproductive rights, to taking meaningful action to preserve our planet. It's just that simple....

One of the most ambitious climate change surveys conducted in Australia has found three out of four Australians are concerned about it and support policies that limit its potential impacts.

“In terms of sample size, methodological rigour, multidisciplinary input and breadth of coverage, it was one of the most ambitious climate change surveys yet conducted in Australia,’’ said lead author Associate Professor Sameer Deshpande. 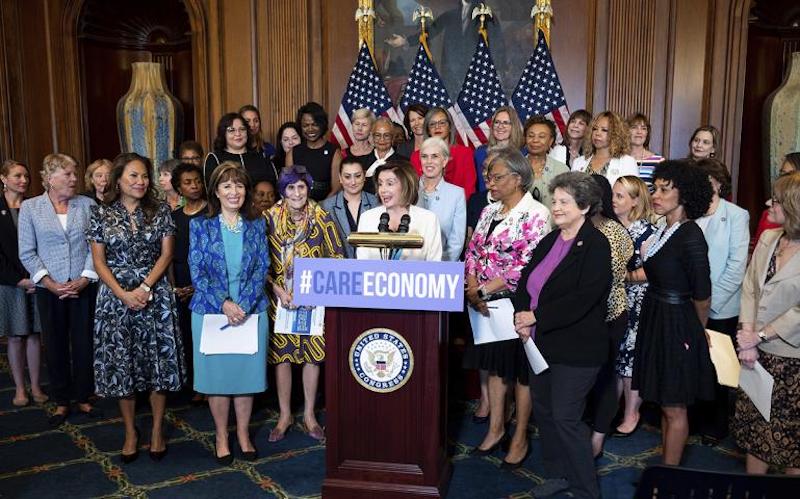 House Speaker Nancy Pelosi speaking at a Democratic Women’s Caucus press conference on the care economy. Photo by Michael Brochstein/Sipa USA via AP Images
Juliet Grable writes in the Sierra Club Magazine about the many women running for office in the U.S. on a climate action platform but given the limitations of our current voting system it will be hard to match the success of our friends in Australia:

In case you haven’t noticed, there are some kick-ass women running for office this year. Take Vermont state senator Kesha Ram Hinsdale, who wrote the state’s first environmental justice bill. If she wins her bid for the US House of Representatives, she’ll be the first woman of color to represent Vermont. Or look at Cheri Beasley, the first Black woman to serve as Chief Justice of the North Carolina Supreme Court, now running for a seat in the US Senate.

Beasley is one of the women of color running for US House and Senate seats being supported through the LCV Victory Fund. “We’re getting involved in these primaries because electing more pro-environment women of color is good for people and the planet – we desperately need Congress to be more representative of the electorate,” said Megan Jacobs, LCV Victory Fund senior national campaigns director, in a press release. “With increasing climate-fueled extreme weather events and rising energy prices, it is more important than ever to send strong climate leaders to Congress who support investing in clean energy, advancing environmental justice, and lowering costs for families.”

If we want to make progress on protecting the environment and public health, we should help elect more women to public office, and support them during their tenure, argues Rachel’s Action Network, a nonprofit dedicated to empowering pro-environment women to take political action. 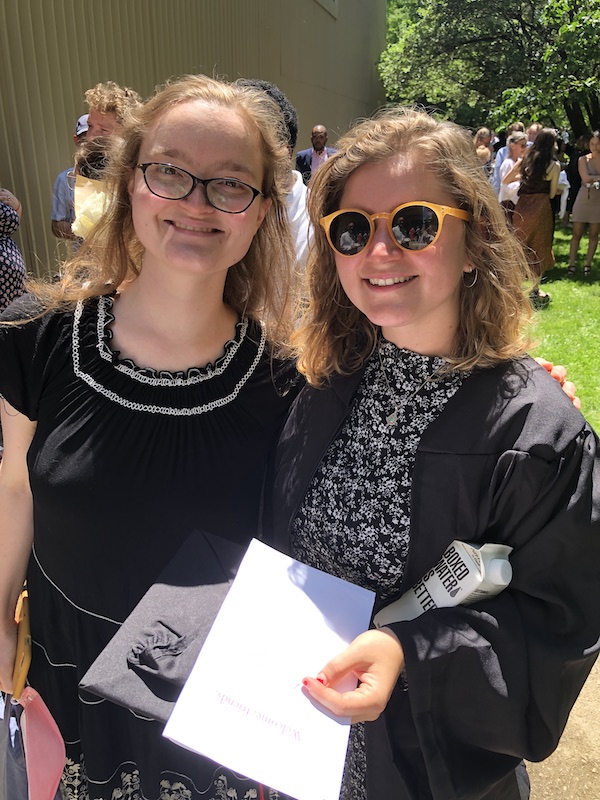 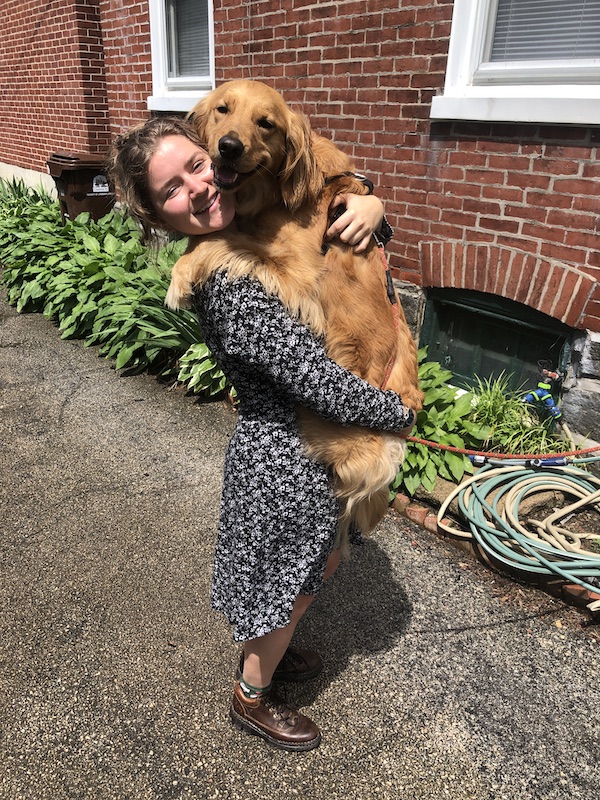 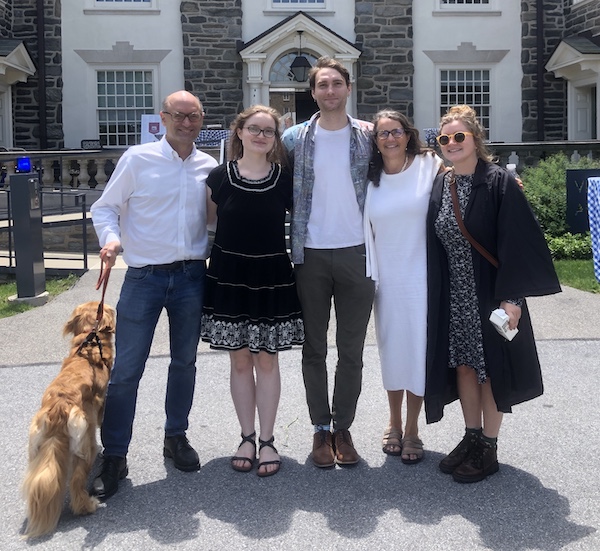 Rob Richie, Anna Richie, Lucas Richie, Becca Richie and our distracted puppy at the Haverford commencement.
My youngest daughter and her peers in the Haverford College class of 2020 graduated in person this last weekend and it was a joy to see. Here's to strong, adventurous, creative, problem-solving young women everywhere!
That's all for this week,
Cynthia
P.S. Don't forget to check out the team's book recommendations from LGBTQ authors: 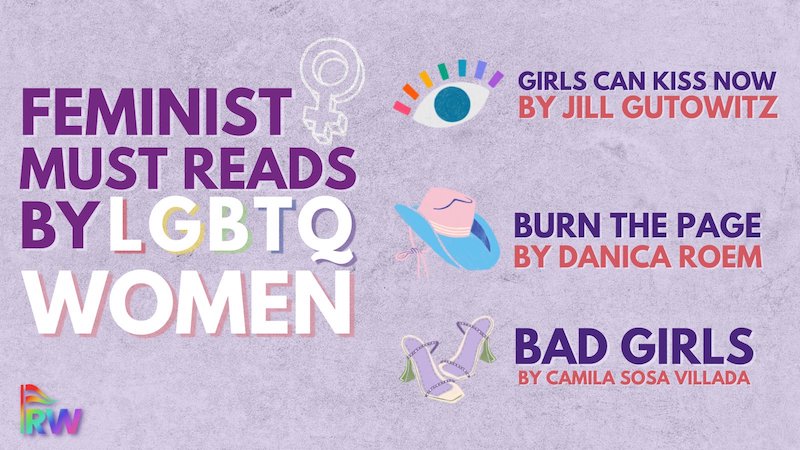