Jessica Gonzalez-Rojas, candidate for the NY state assembly
Dear women's representation enthusiasts,
It's been an eventful week in the world of women's representation with some great wins for women candidates in primaries held this week - including RepresentWomen board member Jenifer Rajkumar who will most likely win her primary for the NY state assembly along with ReflectUS ally Jessica Gonzalez-Rojas who maintains her lead as absentee votes are counted according to this story by Ese Olumhense and Christine Chung in The City:

González-Rojas said that while it was too early to claim victory, she hopes the margins will hold as absentee ballots get tallied up by the city Board of Elections.

Her campaign had strongly encouraged voters to cast their ballots by mail, she said — adding that she was “shocked” by the Primary Day and early voting turnout of nearly 7,000 people, out of nearly 37,000 active Democrats in the 34th Assembly District.

“I’m a woman of color in a five-way race against an incumbent in the middle of a pandemic,” González-Rojas said. “I feel good. I feel really good.”

Jenifer Rajkumar, a lawyer and CUNY professor, has a 25 point lead over incumbent Michael Miller, who has represented the 38th Assembly District — Glendale, Woodhaven, parts of Ridgewood — for six terms.

Political strategist Mia Pearlman said that Rajkumar and González-Rojas’ potential victories may have been precipitated by a changing electorate seeking representatives more emblematic of their communities. There was a very informative piece written this week by Richard Reeves for #19A, the Brookings Institute's series on Gender Equality, on women's representation in the Americas that examines the reasons that the United States lags behind Mexico and Canada in the World Economic Forum's Gender Gap report. The author includes a recommendation that the United States adopt ranked choice voting and multi-seat districts and that the president appoint a gender balanced cabinet in order to increase women's representation, which are all core to RepresentWomen's mission:

A step-change in female representation is needed to get close to equality within any reasonable timetable. But how? Mexico’s progress is the result of intentional policy changes. Since 2014, the Mexican constitution has required gender parity among candidates from all political parties for positions in the federal Chamber of Deputies and Senate (as well as and state congresses). The resulting transformation in representation is proof that “quota laws work,” according to Sofia Alessandra Ramirez from the Council on Foreign Relations.In fact, more than half the countries in the world now use some form of quota system to increase female representation. There is no evidence of a drop in the quality of candidates or legislators. If anything, quotas seem to improve the skills of leaders by, as one Swedish study brutally put it, reducing the number of “mediocre men.”

Quotas in politics are a great idea, but even if such a law could be passed in the U.S. it would be struck down as unconstitutional by the Supreme Court. Nothing, however, is to stop the major political parties from adopting such quotas themselves—like parties in many other countries. Anisa Somani suggests that some public funding of political parties could be tied to the adoption of such quotas, an excellent proposal.

Replacing the current “winner takes all” voting system with more representative approaches such as ranked choice voting or multi-winner districts would also result in greater female representation, among many other reasons for their adoption.

The fastest way to improve the U.S. ranking would be to for either President Trump or President Biden to follow Trudeau’s lead and appoint a balanced cabinet. Overnight, the global standing of the U.S. in terms of gender equality would be dramatically improved. Another area where progress is needed (and has gone backwards since 2016) is in the proportion of women in advisory positions, as Kathryn Dunn Tenpas argues in her essay in this series.

But the biggest prize of all, of course, is the White House. Although WEF gives each of the four main domains—economics, health, education, and politics—an equal weight, the sub-indicators for each are weighted differently. For the political empowerment score, most weight goes to the head-of-state indicator. And here of course the U.S. gets the lowest score possible: zero. By comparison, many countries closer to the top of the gender equality table have had women as political leaders for many of the last fifty years, including Iceland (22 years), Norway (16 years), Germany (14 years), and the United Kingdom (14 years).

Simply electing a woman as president would therefore transform the position of the U.S. on the international league table for gender equality. By my calculations, if Hillary Clinton had become a two-term president in 2009, the U.S. would be 36th in the world—not high enough perhaps, but a lot higher than 53rd.

Image Source: All In Together
Since it became law on June 23, 1972 Title IX has had an incredible impact on the creation and protection of educational opportunities for women and girls but it's also a terrific example of the enduring strength of systems strategies to advance equal opportunity. Maura Reilly writes about the history and the impact in this week's Seneca Falls Revisited blog:

During the passage of Title IX it became known for the protection and support it gives to women athletes at the high school and college level. In response to an attempted amendment which would have excluded sports programs from the purview of Title IX, tennis Hall of Famer, Billie Jean King became an avid proponent of the Bill and testified in the House of Representatives. As a result of Title IX, between 1974 and 2017, the number of women college athletes has increased from 300,000 to 3.1 million.

Although it is often best known for the protection of women’s athletics programs, Title IX includes wide-ranging protections for all individuals, regardless of gender identity or expression, including female, male and gender non-conforming individuals. Title IX has also become an avenue for enforcing policies regarding sexual harassment and assualt on school campuses. The protections for survivors of sexual assault increased under the Obama administration which enacted several new policies to increase enforcement and rights. However, many of these policies have been rolled back in recent years by the Trump administration.

The U.S. has a long history of institutional reforms, including Title IX, which address the systemic inequality groups face, rather than forcing the groups to change to fit an unequal and unfair system. While legislation like Title IX, the Civil Rights Act and the 19th Amendment have made incredible strides forward, our electoral playing field continues to unduly benefit white men. To achieve gender equality and parity, structural barriers women face must be eliminated with institutional and legislative actions like Title IX. The surprising links between the coronavirus, climate change, and inclusive governance.

The coronavirus pandemic has highlighted numerous vulnerabilities in global systems for health care and governance. And while it has become common to say COVID-19 is a disease that knows no borders, the fact that it disproportionately impacts people along social divisions such as gender, race, and wealth underscores the importance of discussing more just and sustainable conditions.

The pandemic—and the speed at which it has circled the globe—serves to remind us just how interconnected the world has become. In that sense, it is also an omen for how climate change can impact the planet, and the exponential nature of the threats faced by humanity.

How can countries create more resilient and equitable systems—not just for this crisis, but for crises still to come? What lessons can we learn? And what tangible measures can we take? Congressional candidates Aliscia Andews, Source: Josh Janney, The Winchester Star
It has been great to see the many uses of Ranked Choice Voting this year from the Indiana Republican party to the Kansas Dems to the Academy of Motion Pictures but it was particularly satisfying to see the use of RCV in the Republican primary in Virginia this week because a woman (Aliscia Andrews) emerged from a crowded field and won a significant majority of the vote, according to this story in The Winchester Star. Her win, and many other wins for Republicans around the country in RCV elections, shows that political operatives from across the ideological spectrum want fairer processes and outcomes:

On Saturday night, Andrews won the final round of voting in the 10th Congressional District Republican convention, securing the GOP nomination. The convention was held outside Shenandoah University’s James R. Wilkins Jr. Athletics and Events Center.

“I think we worked incredibly hard, but so did every campaign that was here today,” Andrews said in a phone interview afterward. “And I just am so humbled to be the nominee for the 10th District of Virginia.”

The convention was held drive-through style, with 1,240 Republican delegates filling out ballots in their own cars and handing them to a volunteer. Voting took place from 8 a.m. to 4:45 p.m.

Each delegate ranked their first, second, third and fourth choices. The ranked-choice voting was done to ensure that the Republican nominee for the 10th District race would be supported by a majority of the party, rather than a plurality. The votes were counted inside the Wilkins Center. I am excited to share with you the link to our new report PACs & Donors: Agents of Change for Women's Representation that examines donations to women candidates in the 2018 election cycle and explores strategies to encourage these gatekeepers to become agents of change. We relied heavily on our terrific partners at The Center for Responsive Politics for data and guidance - heartfelt thanks to Sheila Krumholz and Sarah Bryner:
This report provides an update to our 2016 report Individual and PAC Giving to Women Candidates , which examined the impact of individual and PAC donations on the success of women candidates during the 2016 Congressional elections. Our report found that Political Action Committees (PACs), both membership and leadership PACs, underfund women in both the Democratic and Republican parties. Additionally, while small individual donors favored women candidates, they do not make up the bulk of individual donations.
Although the 2018 Midterm elections saw a record number of women run for the U.S. Congress and win, women remain underrepresented. Women candidates continue to face many institutional barriers when it comes to being elected, including their actual and perceived ability to raise enough money to run effective campaigns. Our PAC report on the 2018 election cycle, analyzes the data collected by the Center for Responsive Politics , OpenSecrets project, with a gender lens. Our goal is to illustrate the impact funding has on women’s representation and the role money plays when it comes to the hurdles women face in politics.
Findings
Although, there are substantial differences when it comes to running during a Midterm election compared to during a Presidential election year, the institutional challenges women candidates face endure. To reach legislative gender parity, action must be taken by individuals and organizations to eliminate the barriers and allow women equal opportunity to run for office and win. The RepresentWomen team created a series of infographics to illustrate the rate at which these gatekeepers underfund women candidates that inform our work with PACs to set higher targets for the amount of money they give to women - especially challengers and republican women. Please let me know if there is a PAC or two that is of special interest to you and we can create additional infographics - here is a sample: Finally, congratulations to research champs at the Center for American Women and Politics who launched a new database on women in elected offices in the United States this week!
Have a great weekend,
Cynthia
P.S. And as always, don't forget to check out this week's must-reads from the team at RepresentWomen: 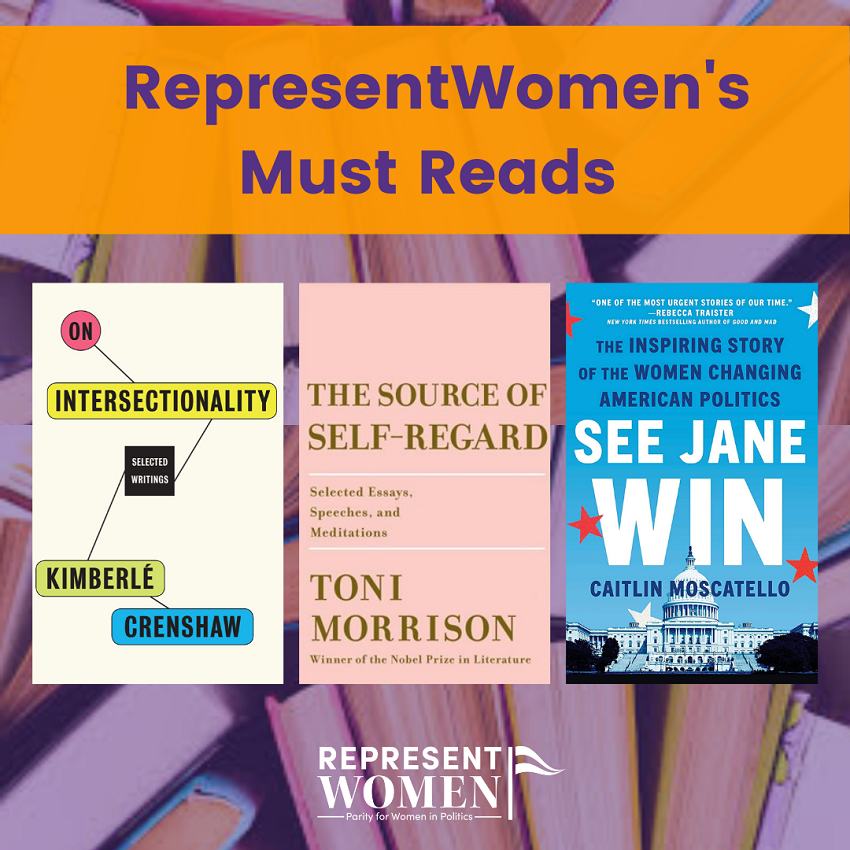