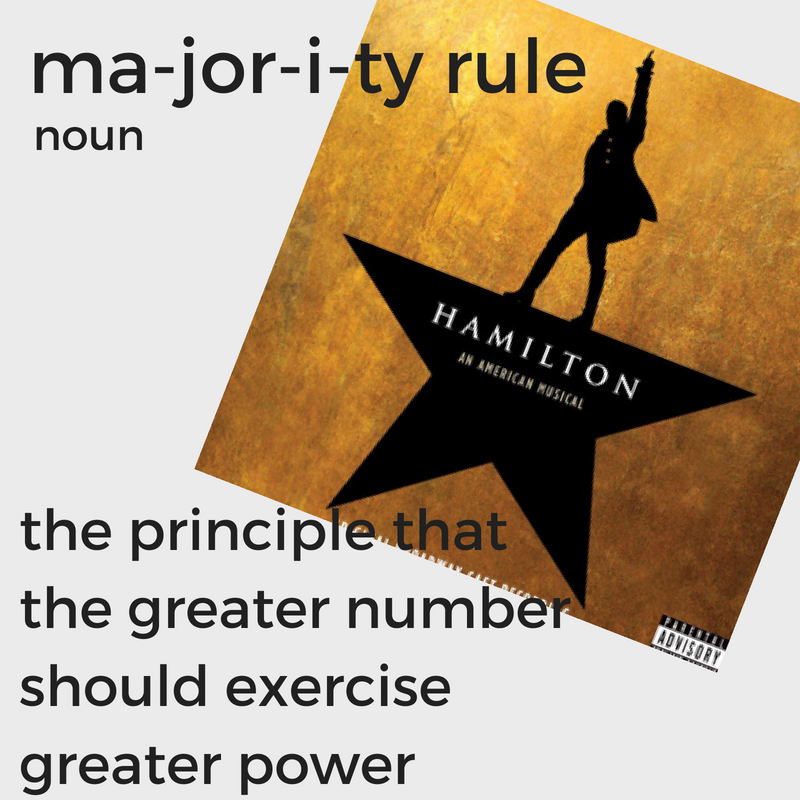 I have been thinking a lot about majority rule.
My daughter and I were among the fortunate who got to see Hamilton at the Kennedy Center this week. I was of course reminded of the errors of our 'founders' who institutionalized the oppression of women & people of color in our Constitution which was, and is, much heralded for its promise of representative democracy.
I was also reminded of the core belief in majority rule that the 'founders' wrestled with in designing our government, and that the lyrics from Hamilton challenge people to consider:
Are we a nation of states what’s the state of our nation?
I’m past patiently waitin' I’m passionatelymashin’ every expectation
Every action’s an act of creation
I’m laughin' in the face of casualties and sorrow
For the first time, I’m thinkin’ past tomorrow
In Federalist 10, Madison talks about majority rule as a way to prevent organized factions and local prejudices from hijacking a government ("If a faction consists of less than a majority, relief is supplied by the republican principle, which enables the majority to defeat its sinister views by regular vote. It may clog the administration, it may convulse the society; but it will be unable to execute and mask its violence under the forms of the Constitution.").
Jefferson was a big proponent of majority rule and there's a lot of statements from him arguing that it's necessary (e.g. "Absolute acquiescence in the decision of the majority, the vital principle of republics, from which is no appeal but to force, the vital principle and immediate parent of despotism, I deem [one of] the principles of our Government, and consequently [one of] those which ought to shape its administration." First Inaugural address, 1801; "Where the law of the majority ceases to be acknowledged, there government ends, the law of the strongest takes its place, and life and property are his who can take them." to Annapolis Citizens, 1809; "[Bear] always in mind that a nation ceases to be republican only when the will of the majority ceases to be the law." Reply to the Citizens of Adams County, Pa., 1808).
Our voting system was designed in part by these same 'founders' whose thinking was informed by 18th century norms and prejudices. The winner take all system used for most elections today creates perverse incentives where candidates are told not to run lest they split the vote, voters are often expected to settle for the lesses of two (or three) evils, and those elected often represent a plurality or minority of voters. This in turn creates a greater disconnect between government and the people. Winner take all voting & plurality rule enables the election of people whose views and policies are not supported by the majority.
But democracy can't just be - or be just - with simple majority rule. Founders like Adams and many others envisioned a government that was a 'portrait of the people in miniature' - led by the majority to be sure but inclusive of minority opinion as well. Our current voting system fails to deliver on this promise.
One of my favorite lines in talks I give is that women are really the only true majority - a majority of the population, certainly the majority of mothers, and in most industrialized nations the majority of voters. Yet this majority status has not afforded us equality in representation.
I mention all this because it provides some context for London Breed's historic win in the SF mayoral race making her the only woman mayor in our nation's top 15 cities and the 1st woman of color to be elected mayor of SF. As you may well know, SF uses ranked choice voting  - a system designed to maximize the chance that all voters will cast a vote for a candidate of choice.
Here is a good explanation from FairVote's deputy director Pedro Hernandez of how ranked choice voting - a system designed for the 21st century - impacted Breed's win:

With fewer than 7,000 ballots left to process, it is now clear that London Breed has been elected in a ranked choice voting (RCV) race as the next mayor of San Francisco by a vote margin of less than 1%. Mayor-elect Breed becomes the only directly-elected woman mayor in our 15 largest cities across the country, and of course the only one of those cities to have RCV, as well as the first African American woman mayor of San Francisco. Congratulations to Mayor-Elect Breed!

Despite the fact that RCV is working, there are powerful forces who have called for its repeal. Here’s an overview of why RCV has worked in SF:

Huge turnout: Voter turnout will end up around 52%, giving San Francisco its highest turnout for mayor in 15 years, much higher than statewide turnout in California.

Low error rate for RCV ballots: There are higher rates of voter errors in the governor and US Senate races in San Francisco. The city’s voters were six times more likely to invalidate their ballot voting for governor than when voting for mayor.

More representative of electorate: The percentage of voters having their ballot count in every round is higher than ever, with nearly nine-in-ten voters counting in every round from first to the last. In traditional runoff elections previously used in San Francisco, turnout declined on average by more than 30%.

Winner has a mandate from voters: Both London Breed and her main challenger Mark Leno were ranked first, second, or third by more than 60% of the voters.

Time to determine winner not connected to ranked choice voting: Election results are determined by the closeness of the race and the number of vote by mail (VBM) ballots. In another RCV race that was on the ballot, the winner was known on election night because it wasn’t close. But the mayor’s race was extremely close, and there was a tremendous surge in VBM ballots dropped off on election day, all of which needed to be inspected and verified. Running the ranked choice voting tally actually only takes a few minutes, which is why ranked choice voting results could be posted on election night and each subsequent day as more VBM ballots were processed.

Ranked choice voting won big in Maine this week with voters ratifying RCV for a second time after repeated attempts by the legislature, the courts, and some pretty fierce partisans to block it. The Portland Press Herald wrote "Passage of Maine's Ranked Choice Ballot Question Seen as Turning Point in Election History"
Mainers supported ranked-choice voting for the second time in two years by passing a people’s veto on Tuesday, making the state the first to overhaul its system for choosing candidates.

With 90 percent of precincts reported by Wednesday afternoon, Yes on 1 held a 54-46 advantage – a greater margin than when ranked-choice voting was first approved by referendum in 2016, albeit with a lower turnout.

“There is so much about our political system in Maine and in America that seems broken and I have to believe that history is going to remember yesterday as a turning point,” Yes on 1 campaign chair Dick Woodbury, a former independent state senator, said Wednesday. “Just about everything that is wrong is nudged in a better direction by this reform.”

Supporters, now buoyed by strong public support, hope to pressure lawmakers to pass a constitutional amendment that would mandate ranked choice for all state offices in the general election and also assist other states that might want to give process a try. Without an amendment, ranked choice would continue to be used only in statewide primaries for state and federal office, and for federal office in the general election.

Voters in Maine did get to test the system for the first time Tuesday, in the Republican and Democratic gubernatorial primaries, in the Democratic 2nd Congressional District primary and in a Republican state house primary. Some election clerks reported confusion, but there did not appear to be any major problems putting it into use.

“Ranked-choice voting changes the way we elect politicians to put more power in the hands of voters and restore majority rule,” said Kyle Bailey, the Yes on 1 campaign manager. “This race to the bottom and to the extremes is over. Today we’re writing a new chapter where candidates are encouraged to reach beyond their base … to build coalitions.”
Ranked choice voting has been introduced in dozens of state legislatures by republicans and democrats alike and is likely to be considered as a key component of the NY City Charter Commission proposal - which all points to the exciting reality that there is a growing acceptance that ranked choice voting may well be, as David Brooks wrote, The One Reform to Save America.
The New York Times editorialized in favor of ranked choice voting last weekend, while the Washington Post editorialized in favor of ranked choice voting just today. While The Economist writes that it's A Simple Reform that Might Fix America's Dysfunctional Politics.
Despite my best efforts and the incredible statistics, none of this coverage includes any discussion of the impact of #RankedChoiceVoting on women's representation and there are very few women engaged in promoting #RCV on social media platforms. Women are twice as likely to be elected to office in cities with ranked choice voting and 3 out of the 4 Bay Area cities with RCV now have women mayors. Please add your voice to the growing chorus of support for ranked choice voting.

Many thanks to Kelly Dittmar for giving me a chance to write about why ranked choice voting helps to elect more women on their great site Gender Watch.
Hats off to the terrific women who won around the country and in Virginia this week and the many of you who helped make them winners!
It's time for women to be represented - it's time for true majority rule.
Cynthia

​At the Kennedy Center with daughter Anna