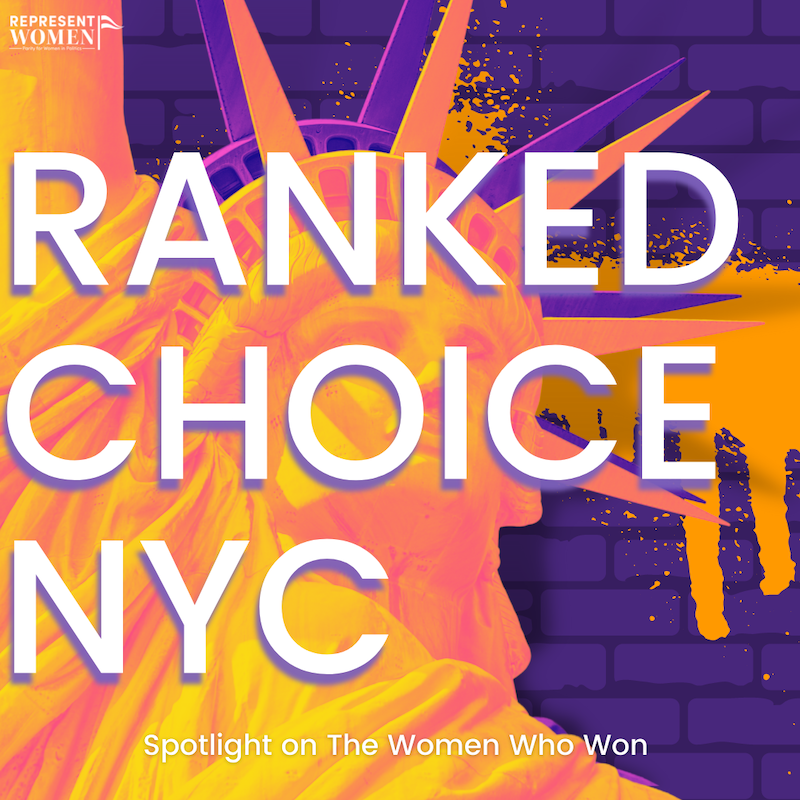 Dear friends,
The votes have been counted in the New York City primary and, while the city will have to wait at least another four years for a woman mayor, turnout was the highest its been in 30 years, 95% of voters found the ranked choice voting ballot easy to use, and women are projected to hold the majority of seats on the NYC council after the general election in November. 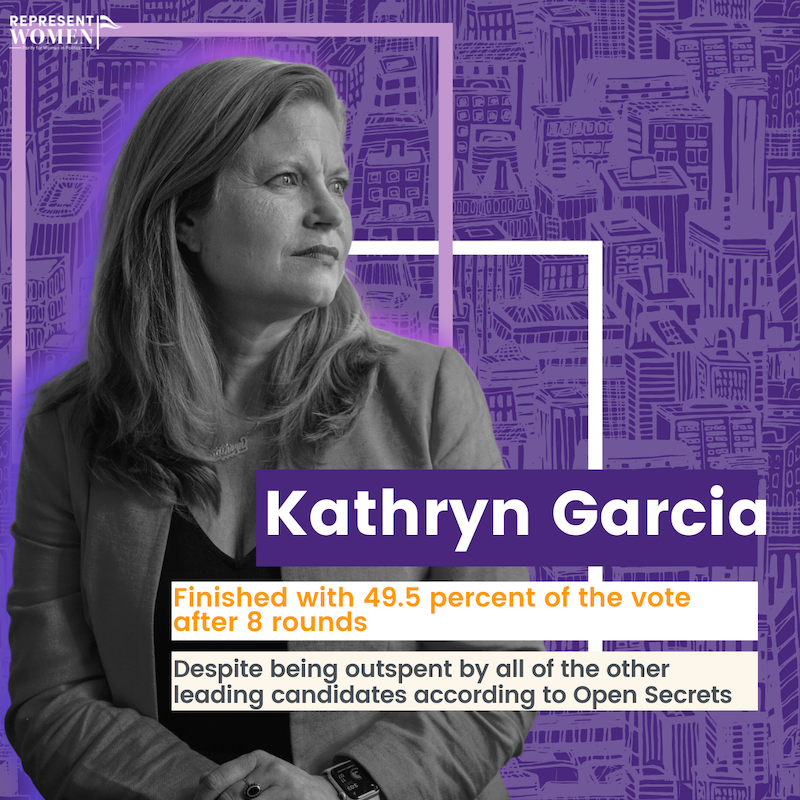 Maya Wiley and Kathryn Garcia both ran strong campaigns despite being outspent by a number of the male candidates -- Garcia came within a percentage point of becoming the first woman mayor of New York City. But, as Emma Fitzsimmons writes in The New York Times, there have been 109 male mayors of New York City and residents will have to wait a little longer for the chance to elect the first woman mayor:
It was a constant refrain for the two leading female candidates running for mayor of New York City: The city has had 109 mayors, and all of them were men. It was finally time for a woman.

The two candidates, Kathryn Garcia and Maya Wiley, had experience in government. They had major endorsements from unions, elected officials and newspaper editorial boards. They raised millions of dollars and gained momentum in the final weeks of the campaign.

New York is one of a handful of major cities where voters have yet to elect a woman as mayor, along with Los Angeles, Detroit and Philadelphia. Boston recently got its first female mayor, and women currently run more than 30 of the nation’s 100 largest cities.

Ms. Wiley and Ms. Garcia won more than 380,000 first-choice votes between them, or nearly 41 percent of the votes. Ms. Garcia finished just one percentage point behind Mr. Adams under the city’s new ranked-choice voting system.

But their loss felt like a missed opportunity for those who believed that New York would at long last elect a woman.

“I’m disappointed and sad,” said Christine Quinn, the former City Council speaker who ran for mayor in 2013. “I give a lot of credit to Eric Adams, but I want a woman to be mayor of New York. It is truly, truly disheartening.”
Antiquated winner take all voting rules for federal, statewide, and county offices in Maryland are a serious barrier to women's representation. In Montgomery County, MD where I live, there is just one woman on the county council, there are zero women members in the Congressional delegation from MD, and so far all the nine Democratic candidates for governor are men. Ovetta Wiggins writes about the lack of gender diversity in The Washington Post this week:
Some Democrats have quietly expressed frustration that their candidates are all men. On the Republican side, Kelly M. Schulz, who is Hogan’s commerce secretary, is vying to become the Republican nominee, along with Del. Daniel L. Cox (R-Frederick), a strong defender of former president Donald Trump, and former state lawmaker and perennial candidate Robin Ficker.

The Democratic field has racial diversity, with three Black men — John B. King Jr., a former U.S. education secretary who is also of Puerto Rican descent; Wes Moore, a former head of the Robin Hood Foundation; and Rushern L. Baker III, a former Prince George’s County executive — and one Hispanic man — Tom Perez, a former chair of the Democratic National Committee and former U.S. labor secretary. Ashwani Jain, a former candidate for Montgomery County Council who also is running, is the son of Indian immigrants.

But the Democrats lack gender diversity.

“It’s unbelievable to me,” said Terry Lierman, a former chairman of the state Democratic Party.

Lierman — whose daughter, Del. Brooke Lierman (D-Baltimore City), is running for comptroller — said the dearth of women seeking statewide office is “like a drought” in Maryland, which has not had a woman in its congressional delegation since January 2017.

Eberly said there is still time for a woman to enter the race.

“It is — at least according to the calendar — still early,” he said. 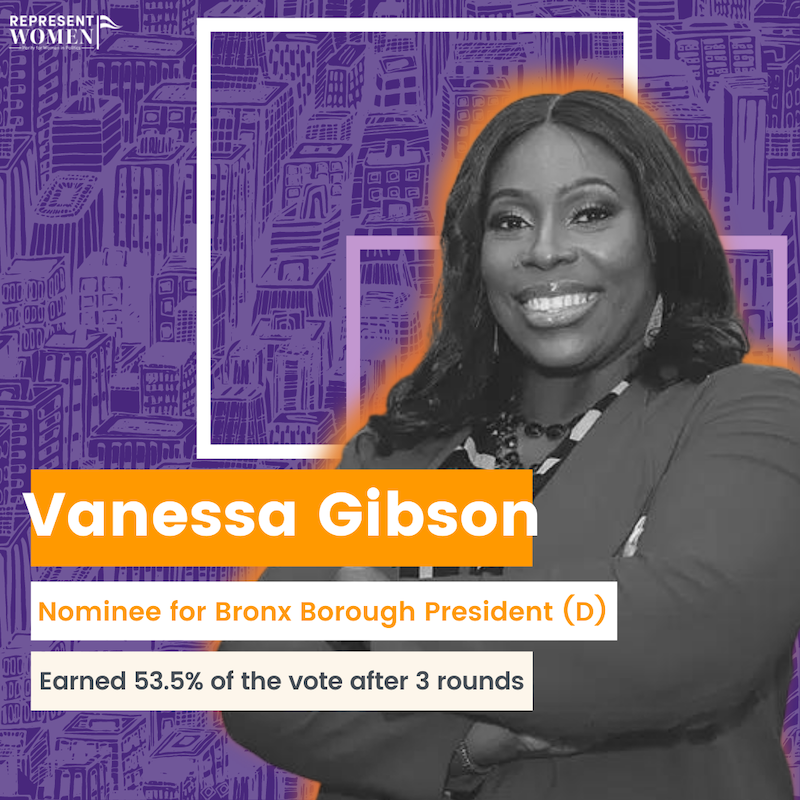 The Cook Political Report issued ratings for the upcoming gubernatorial races that suggest there isn't much opportunity for women to pick up many, if any, seats. Questions remain around whom the Democrats will nominate to run for Kate Brown's seat as she is termed out - this would be an excellent opportunity for the party to commit to fielding women candidates to fill her seat. There is also an open seat race in Pennsylvania where party officials and advocates could also prioritize the recruitment of women to run. Also in play are seats held by Democratic women in Maine, Kansas, and Michigan along with potential Democratic nominees in seats held by Republicans in Arizona, Georgia, and Florida. 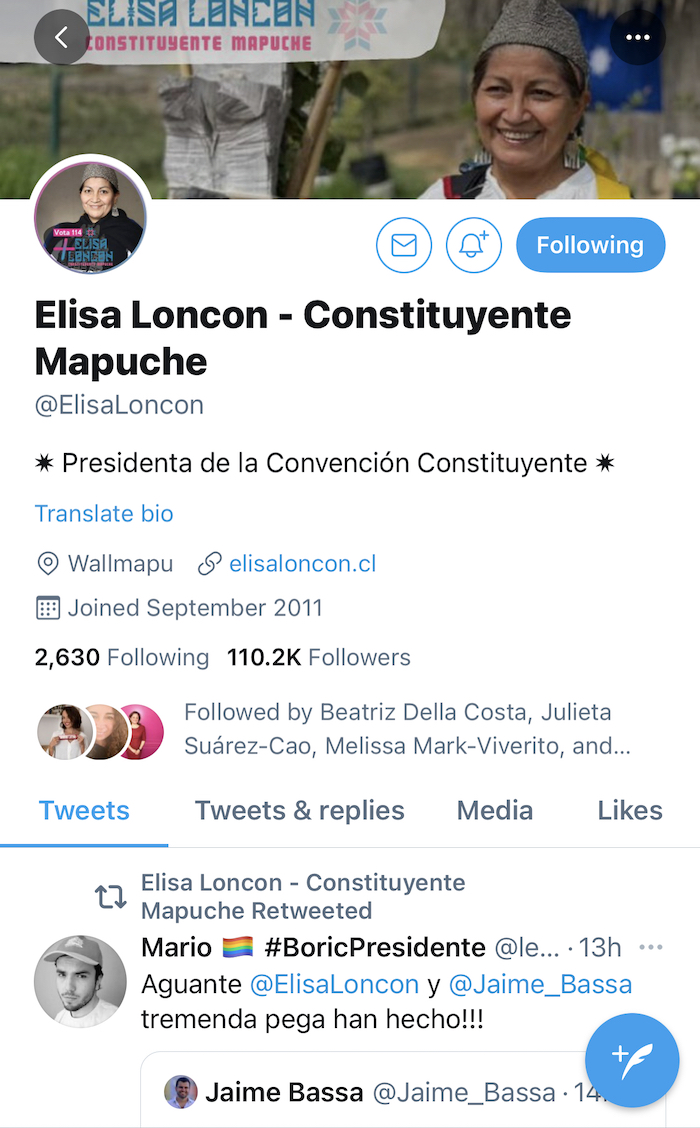 University professor and activist for Mapuche educational and linguistic rights Elisa Loncon, a 58-year-old independent constituent, was picked by 96 of 155 delegates, including 17 Indigenous people, who make up the constitutional body.

The delegates were elected to draft a new text to replace Chile’s previous Magna Carta, which was produced during the dictatorship of Augusto Pinochet.

“I am grateful for the support of the different coalitions that placed their trust and their dreams in the hands of the Mapuche nation, who voted for a Mapuche person, a woman, to change the history of this country,” Loncon said.

Fed up with the political status quo and urging systemic reforms, Chilean voters in May elected dozens of progressive, independent delegates to redraft the constitution – dealing a surprise blow to conservative candidates who failed to secure a third of the seats to veto any proposals. 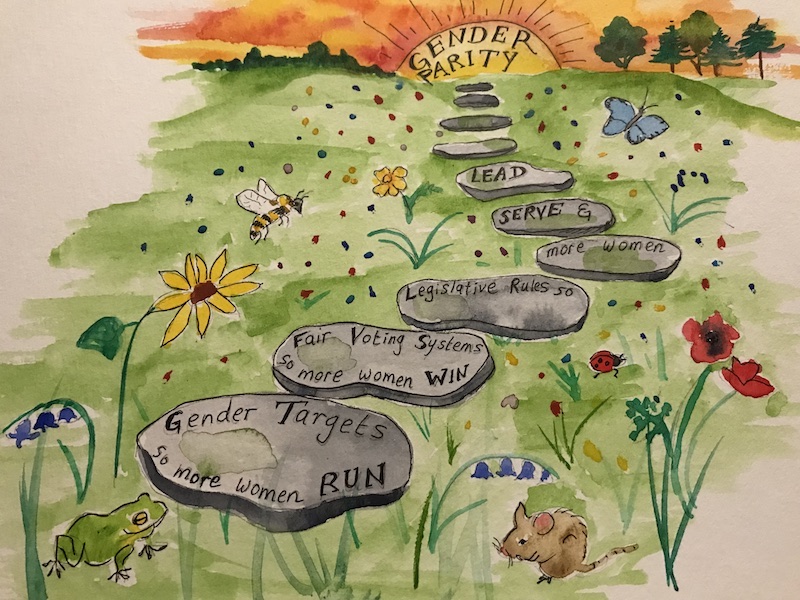 Steps to gender parity, painted by Melanie Humble, include gender targets or quotas so more women RUN, fair voting systems so more women WIN, legislative rules so more women can SERVE, and diverse slate requirements, replacement mandates, & other best practices so more women can LEAD.
In other news from around the globe, women's representation advocates in Malta are pushing for new gender quota legislation for local office according to this piece in Lovin Malta:
With a ‘gender quota’ bill for MPs set to kick in by the next election, the Labour Party has now set its eyes on local councils.

“The principle of strengthening equal participation of sexes on a parliamentary level should be extended to local councils with a mechanism that would be adequate for them,” the PL said in its latest policy document ‘100 Idea‘.

This particular proposal was also highlighted by PL deputy leader Daniel Micallef in his speech, who said that after the “historic parliamentary gender mechanism reform, we must see how it can apply for local councils”.

The ‘gender quota’ bill for MPs envisages an electoral mechanism which will automatically kick in if the lesser represented gender gains under 40% of the total seats.

Up to 12 seats, split evenly between PL and PN, would be added for women or gender-neutral people who failed to get elected in the first round, to ensure a minimum 40% representation of the underrepresented sex. This mechanism will only apply if MPs from two political parties are elected. 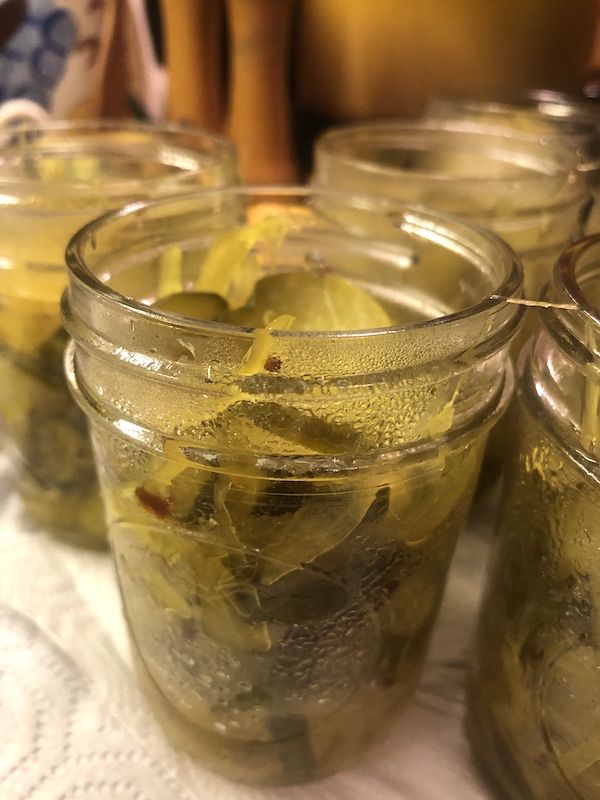 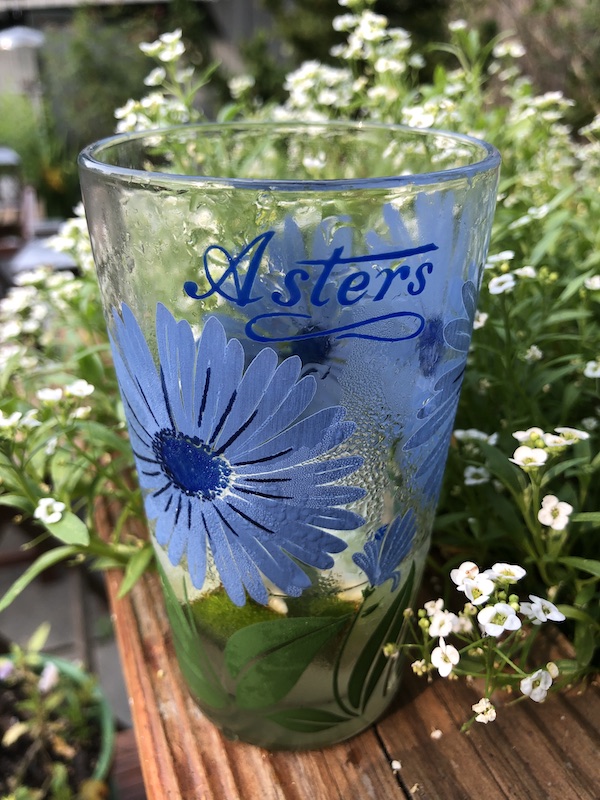 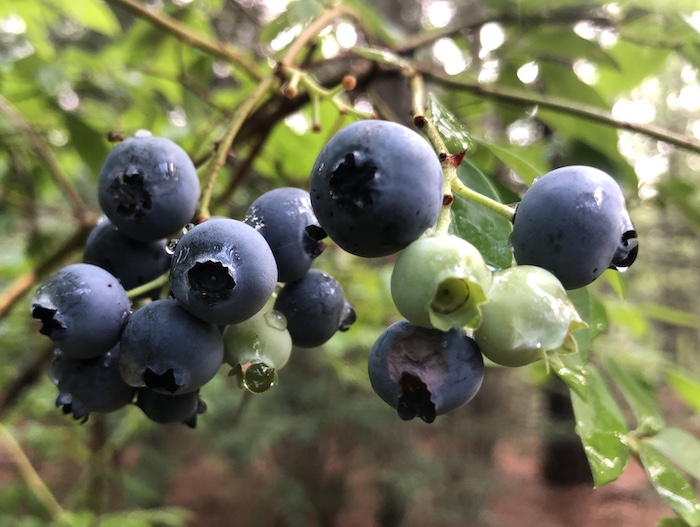 One final thought, each year when the focus of celebration is on the architects of the United States Constitution I am reminded of the contribution of the Iroquois men and women who built a system of representative government long before my ancestors landed on these shores. The system of democracy they designed appealed to William Penn who modeled his Pennsylvania experiment on the concept that everyone should have a voice in government. The Constitutional framers borrowed some of these same notions for their historic document but left out some key components relating to representation and equality. I am committed to legislative advances like the Fair Representation Act that correct some of the mistakes of the "founders" and help to build a 21st century democracy where power is shared and decisions are made by the true will of the governed.
Pickles, fruit tarts, and lime drinks are keeping me busy and happy this week, here's to a restful and productive summer,
Cynthia
P.S. Remember to check out suggested feminist reading from the team at RepresentWomen 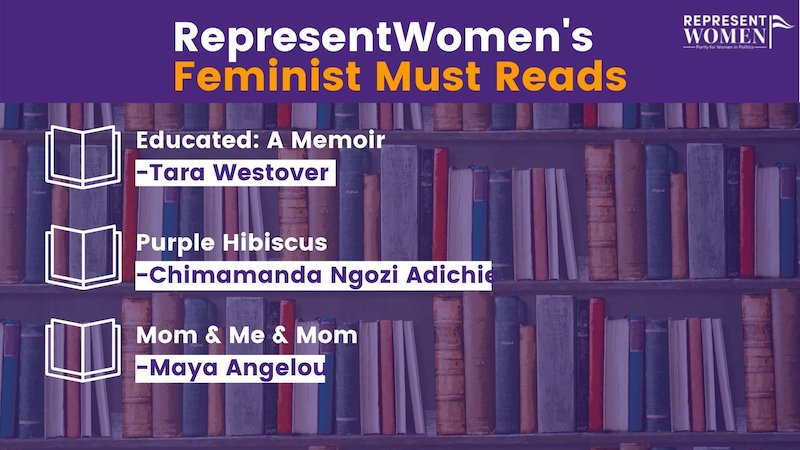