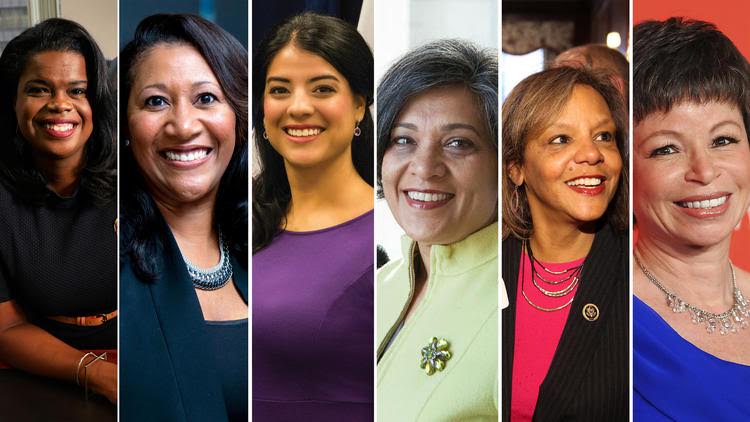 ​Speakers at the Galvanize launch in Chicago this week

This week marked the 169th anniversary of the Seneca Falls Convention where a group of women - who had been excluded from a abolitionist convention because of their gender - met to discuss women's equality. While it took another 70 years to win suffrage the bonds that formed in July of 1848 grounded the conversation that is still evolving today.

Many of us were reminded of the power of gatherings like Seneca Falls at the incredibly successful event that IGNITE and Running Start hosted in Washington, DC this week. Nearly every hand went up when the room full of diverse young women was asked if they plan to run for office. It was a thrill to be on a panel with other women's representation enthusiasts that included Erin Vilardi from VoteRunLead, Monica Ramirez from Latinas Represent, Kimberly Peeler-Allen from Higher Heights, Mindy Finn from Empowered Women, Erin Loos Cutraro from She Should Run, and  Larissa Martinez from RightNOW. Here is a link to our segment of the two day program that was packed with impressive and inspiring speakers.

Congratulations to the United State of Women team who launched the Galvanize program this last week - read this story in the Chicago Tribune about the launch:

Galvanize, ideally, will offer the inspiration and the training for more women to find a path toward leadership.

“The attendees at the United State of Women Summit last year made it clear that they wanted to keep learning, connecting and advocating beyond that room — they wanted to do it in their own communities,” Jordan Brooks, managing director and chief operating officer at United State of Women, said in a statement. “The Galvanize Program answers that call and will empower women across the country with the tools they need to be engaged, vocal advocates in elections and public policy debates both nationally and in their own backyards.”

Erin Loos Cutraro, founder and president of She Should Run wrote a great piece in The Hill this week about the launch of their campaign to recruit 250,000 women to run for office by 2030 - which is approximately half of the seats that are elected over the course of an election cycle or two in the United States. The #250KBY2030 campaign will help to build awareness of sheer magnitude of the number of seats that are elected and the women needed to run in them to reach parity! Congratulations on the launch of this aspirational campaign and the great press like this coverage on CNN.

VoteRunLead also had a packed week of Run As You Are trainings in Chicago, New York, and Providence with more events to follow in the coming months!

Other upcoming events include:

Here's to accelerating progress toward parity!

P.S. The terrific Representation2020 interns had a chance to interview some of the young women at the IGNITE/Running Start training this week about the Declaration of Sentiments - they produced this remarkable video.