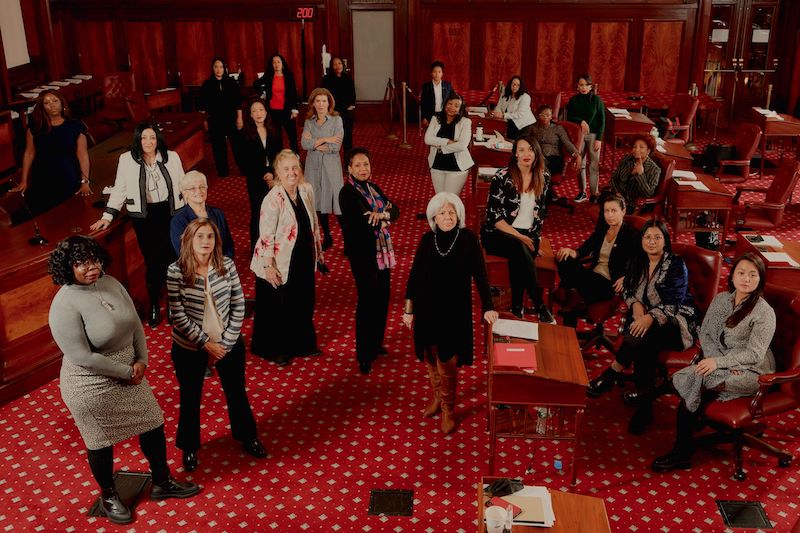 Dear friends,
As of this week, women hold 31 of the 51 seats on the New York City Council. While there was no single factor that led to this outcome the newest ingredient in the mix was the introduction of ranked choice voting and organizations like 21 in 21 that focused on using RCV in every part of the recruitment and endorsement process so that the women running knew how to use the system to their advantage. 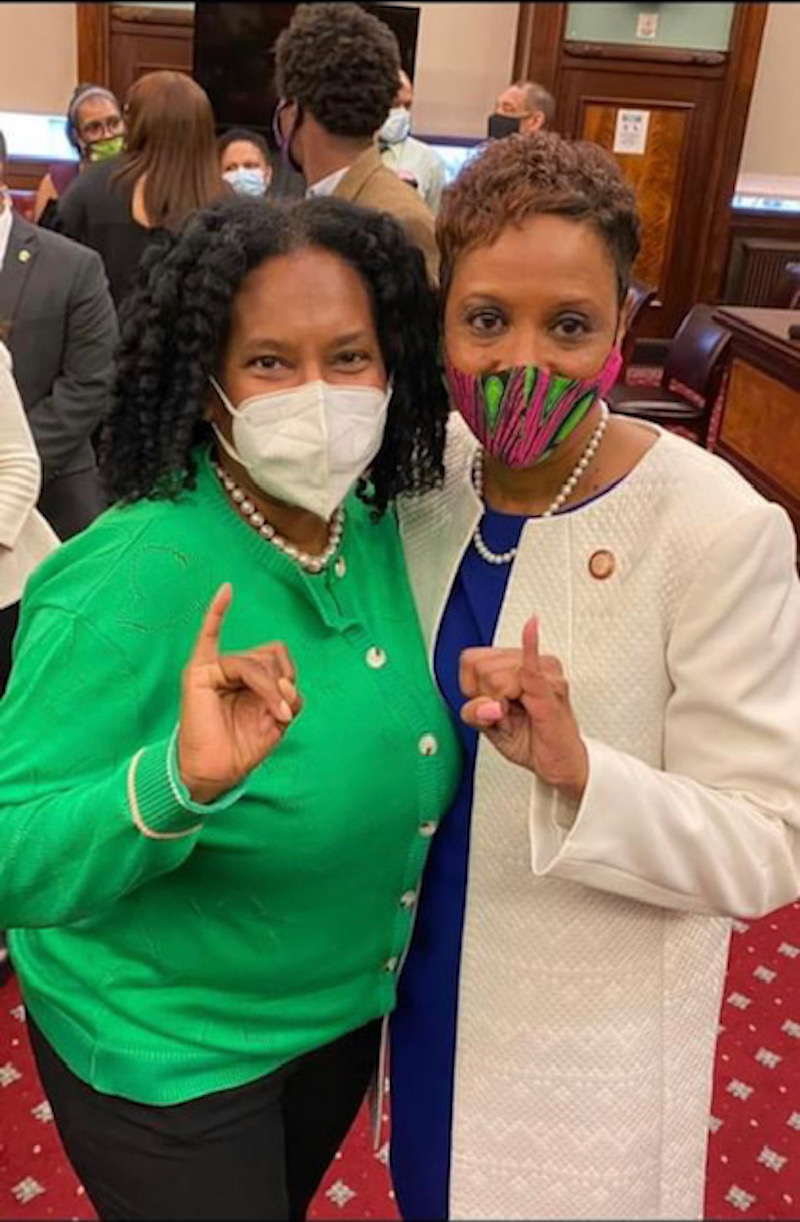 RepresentWomen board member Onida Coward-Mayers with incoming NYC Council speaker Adrienne Adams
My husband Rob Richie and I first started working with activists - including Onida Coward-Mayers pictured above - and elected officials to support ranked choice voting in NYC in the 1990s so I can attest that it has been a long process! I am excited to work with allies to learn from this process and build models for women's electoral success in cities across the United States. Read more about the women-led Council in Curbed:

Julie Won, a 31-year-old tech consultant who grew up in Queens, decided to run for City Council after her parents lost their income. It was the spring of 2020, and her mom, who worked at a nail salon, and dad, who worked odd jobs at a liquor store and a warehouse, suddenly became unemployed. They spoke mostly Korean, so Won tried to help them apply for public assistance. “We were going through all these government systems, but benefits never came through,” she recalls. This month, Won begins her term as a representative of several Queens neighborhoods, including Long Island City and Astoria. “If it weren’t for COVID,” she says, “I would have never made the pivot to run for office.”

For the first time in the city’s history, New Yorkers elected a City Council with a majority of seats (31 out of 51) occupied by women. The new Council, which is also a historically diverse group, is the result of several factors: the pandemic’s devastation of working-class communities of color; the city’s matching-funds program, which gives candidates $8 for every $1 they raise from any city resident, amplifying the effect of small donations; and the new ranked-choice voting system, which encouraged more candidates to run in party primaries and gave average New Yorkers more influence over who wins...

On December 8, right after new­-member orientation at City Hall, the women noticed that while the men’s bathroom is inside the Council chambers, the women’s is outside. “I said, ‘We should just put a sign on it and call it a gender-neutral bathroom,’” says Sandy Nurse, 37, a Panama-born carpenter and community activist representing Brooklyn’s 37th District. “And we’ll just take it over.” It will start there, with “simple things,” she says. And eventually, “we’re going to do things that the city hasn’t seen before.” 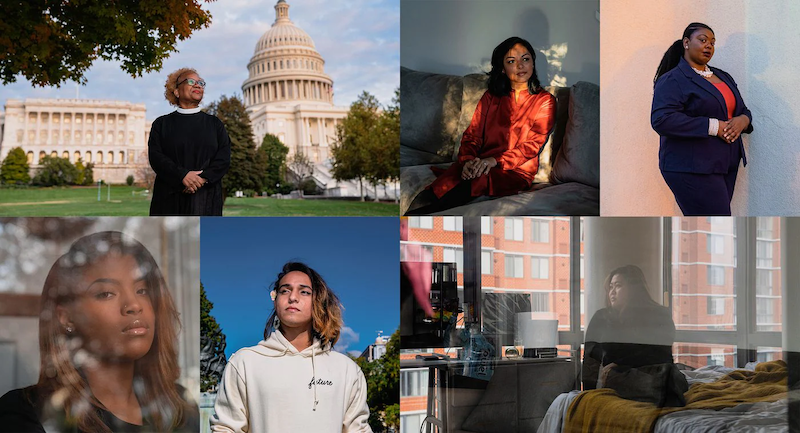 Shuran Huang
The Lily had a very interesting piece by Shuran Huang on women who are involved with voting rights - their profiles are a welcome reminder that the movement to build a 21st century democracy has many sheroes:
2022 is set to be a huge election year in the United States, not least because the midterm elections will determine the control of the House of Representatives and the Senate. During my seven years living in this country as a photojournalist (I’m originally from China), I have witnessed the shifting landscape of voting rights here.

A century after the passage of the 19th Amendment and one year after the Jan. 6 insurrection that shook American democracy, I have witnessed many women activists working at the forefront of the fight for equal voting rights.

Over the course of two months, I spoke to 21 activists, including an Indigenous attorney in Colorado, a grass-roots activist in Georgia and a youth mayor in D.C. Each one of them lent insights; here are their photos and stories. 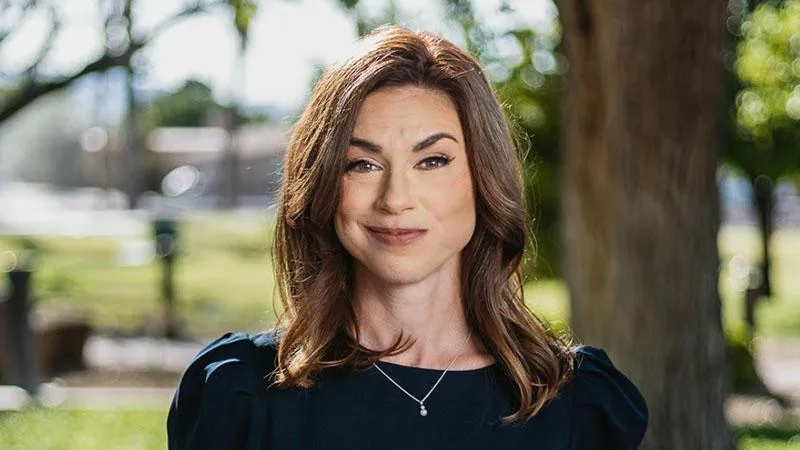 Newly elected Las Cruces councilor, Becki Graham
Barbara Rodriguez wrote this piece for the 19th* about the all-women city council elected via ranked choice voting in Las Cruces, NM - results like this are what I would like to see more of:
Becky Corran’s face will be new on the wall, as will that of Becki Graham. They’ll join Yvonne Flores, who won reelection in November, and three other women who were not up for election this year. The Las Cruces City Council, for the first time ever, will be all women.

Technically the chair of the council is the mayor, and opposite the wall of city council members is another wall of photographs revealing that only men have served as mayors in Las Cruces.

“It makes me think about how representation matters, and if there were one woman on that wall, what would it mean,” said Corran, who will be sworn in Monday along with the members starting new four-year terms. “That there will be all women on the wall on the other side — it’s going to be really exciting.” 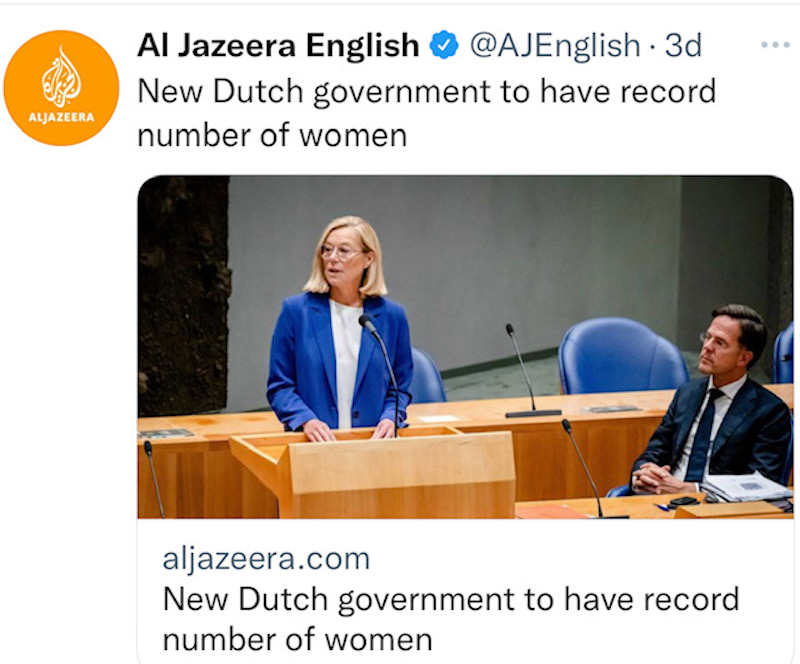 Women will hold nearly half of cabinet positions in the new government in The Netherlands according to this story in AlJazeera:
A record number of women are due to make up the next Dutch government after the incoming coalition published its list of ministers and secretaries of state on Sunday.

An unprecedented 14 of the 29 ministers and secretaries of state will be women, including 10 of the 20 ministers.

The four-party coalition will be sworn in on January 10 after reaching a deal in December – a record 271 days after elections in March – handing Prime Minister Mark Rutte a fourth term in office.

Dilan Yesilgoz-Zegerius, born in Ankara, is set to become minister of justice and security. The 43-year-old, who came to the Netherlands as a girl, was nominated by the centre-right People’s Party for Freedom and Democracy (VVD), to which Rutte also belongs. 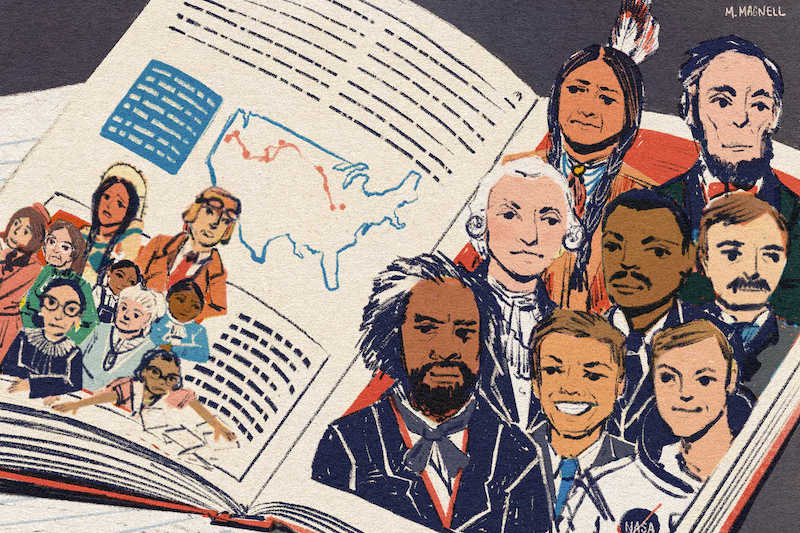 Molly Magnell for The Washington Post
High school senior Micaela Wells wrote this terrific commentary for The Washington Post on the dearth of women in her AP history class textbook that I suspect is true of the coverage of women in the vast majority of high school texts in the United States:
I’m a high school senior who recently completed AP U.S. History, whose curriculum is the national standard for advanced high school history education. Although my textbook — branded AMSCO, and published by a company called Perfection Learning — isn’t endorsed by AP or the College Board, it closely follows the official AP U.S. History curriculum.

In this advanced text is a 20-page chapter on World War II. As I read about President Franklin D. Roosevelt, the Pan-American conferences and the war’s impact on society, I came across a paragraph creatively titled “Women.” Merely a hundred words later, “women” were abandoned.

I was bothered that the writers had deemed 100 words sufficient for teaching students everything important about women during that era. What bothered me even more was my own lack of surprise.

Perhaps some would say of course there are fewer famously influential women than men throughout history, considering the cultural norms that long created gender-based divisions and hierarchies. But that’s a lazy assumption. Curious, I did the least I could do — Googled “important women in American history” — and obtained myriad results. Which raises the question: Why did the writers of my textbook neglect to do the same? Or if they did bother, why was the information excluded?

If education reflects our societal values — and if textbooks provide the foundation of our education — then AP U.S. History is perpetuating for all students the idea that women are comparatively worthless. Worse, it’s sending the message to girls that their stories and accomplishments don’t matter. 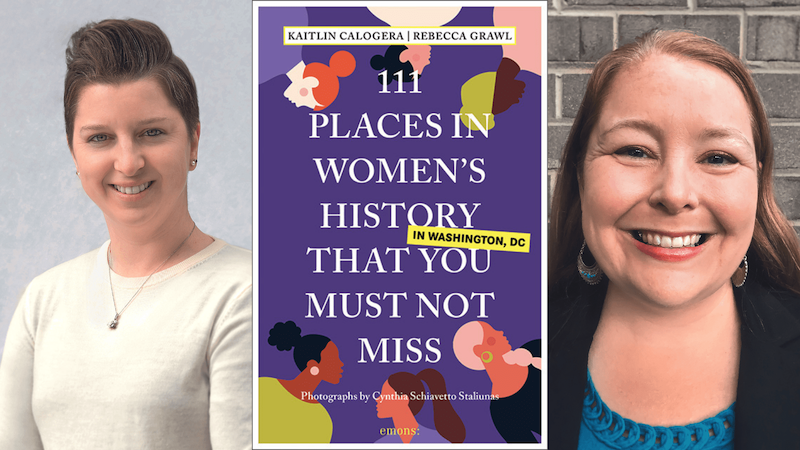 Kaitlin Calogera and Rebecca Grawl, authors of 111 Places in Women’s History in Washington That You Must Not Miss; image courtesy of Michelle Goldchain
I have been a fan of Kaitlin Calogera's a Tour of Her Own for several years so it was fun to see this piece in the Washington City Paper about the new book that she co-authored with Rebecca Grawl on landmarks for women's history in Washington, DC. This book seems like a perfect gift for your favorite women on Galentine's Day!
Kaitlin Calogera was inspired to launch A Tour Of Her Own in 2018—during a time when women were not just asking, but demanding, more representation in their everyday lives. After all, this was the peak of the #MeToo and “Time’s Up” era and a year after the Women’s March took place in D.C. and across the globe.

“When I was going out on tour delivering commentary, I became really mindful of what I was sharing and who I was highlighting,” says Calogera. “It just felt very natural to share women’s history.”

Calogera and Rebecca Grawl are both licensed tour guides who met after Calogera founded TOHO, the first tourism company in D.C. to focus exclusively on women’s history. Grawl is the vice president as well as both a member of the National Society Daughters of the American Revolution and alumnae and senior leader with the National Society Children of the American Revolution.

The two decided to co-write 111 Places in Women’s History in Washington D.C. That You Must Not Miss during the pandemic. They envisioned a hard copy extension of the work their tourism company does, which so far has focused on historical tours, special events, consulting, and virtual experiences. 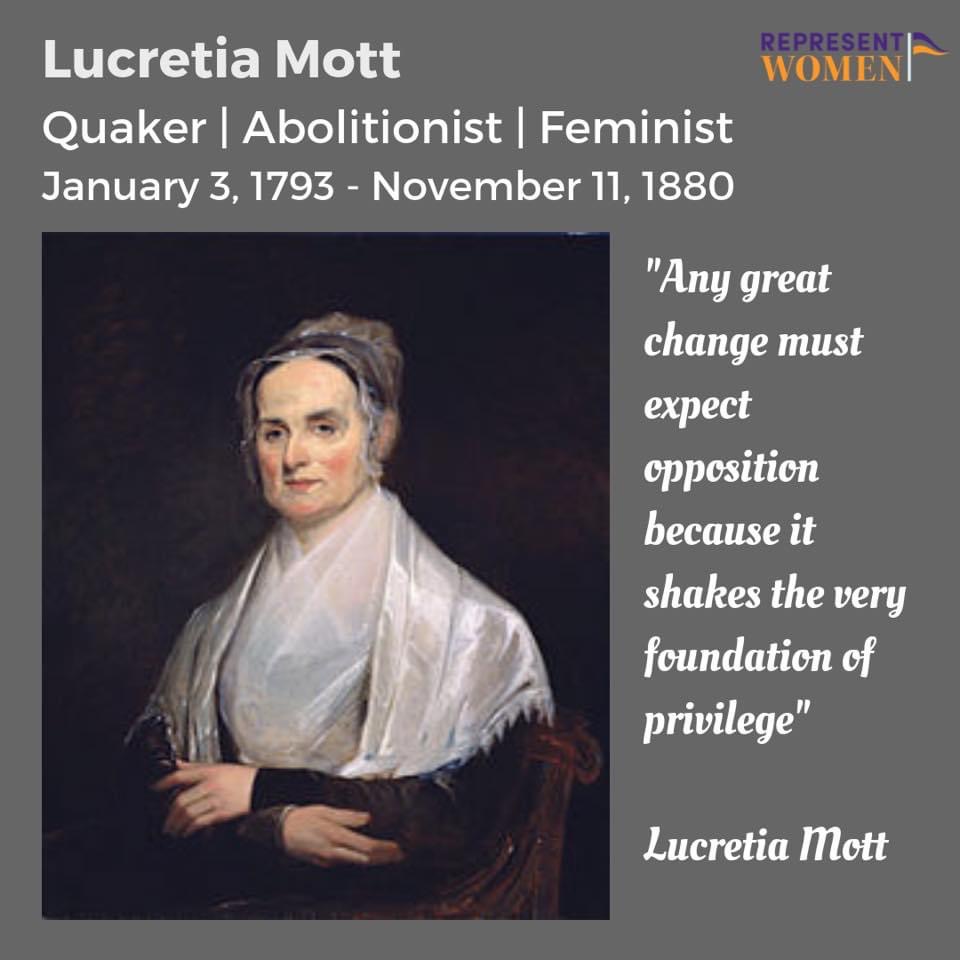 Lucretia Mott's birthday offers a reminder that Quaker women were encouraged to participate in worship & in meetings for business at a time when most women were not…as a fellow Quaker I admire this early example of how power can be shared, it’s really not that hard a practice. 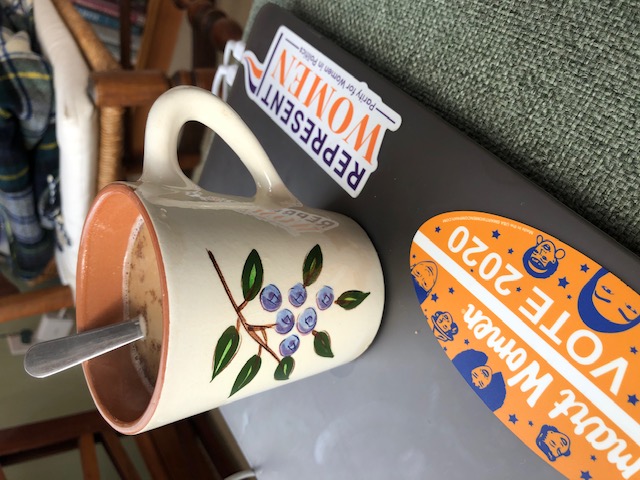 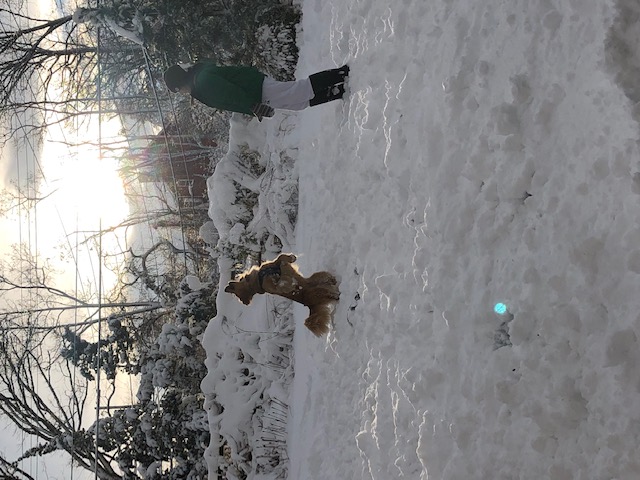 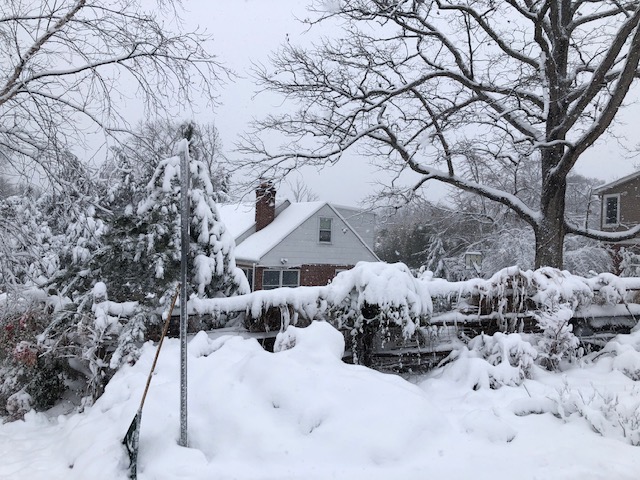 My knee is recovering, slowly, but it was fun to sip Postum and watch the children revel in the snow as it piled up outside!
Looking forward to our work together in 2022!
Cynthia
P.S. Ms Magazine asked a number of feminists about our wishes for 2022 - here is mine:

“My wish for the coming year is that we turn our collective anxiety about the pandemic, threats to reproductive rights, environmental collapse and assaults on our democracy into transformative work to elect more women to help solve these existential crises.

“We know that current strategies alone will not get us to gender balance in politics—in our lifetimes. And we also know that systems solutions to advance women’s representation including ranked choice voting, paid leave and gender balanced cabinets are viable, but we need massive collaboration and investment in these strategies to scale these reforms. So that’s my wish for 2022: investment in and collaboration around systems solutions to advance women’s representation and leadership.” 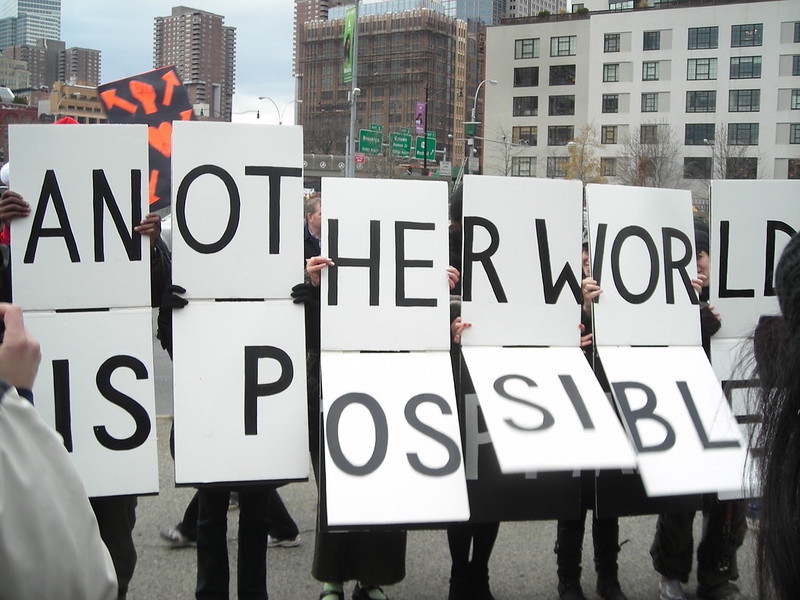