Senators Kristin Gillibrand, Kamala Harris, and Elizabeth Warren
Dear fans of women's representation,
There are now four women running for the democratic presidential nomination along with a number of male hopefuls - multiple candidates who appeal to the same constituencies are a recipe for split votes and 'winners' who get a tiny percentage of the vote in key early contests. A number of state party chairs are open to the possibility of using a ranked ballot to ensure that candidates emerge with broad support. My husband Rob Richie and my friend Rep Jamie Raskin write about the crowded presidential primary field and the ranked choice voting today in The Hill:
Current voting rules can also turn the goal of a “fair reflection” into a distorted funhouse mirror. To earn delegates, a candidate must exceed 15 percent of votes; all others are shut out. In caucus states like Iowa, backers of candidates below this threshold can move to a backup second choice to make their vote count. But “single choice voting” allows no backups. With a crowded field, more than half the vote easily could be cast for candidates below the threshold; it’s even possible that no candidate would qualify for delegates in some states. Expect finger-pointing among like-minded voters splitting the vote, tied to factors like shared ethnicity (African American Sens. Cory Booker and Kamala Harris), ideology (progressive Sens. Elizabeth Warren, Sherrod Brown and Bernie Sanders), and experience (several mayors may run).
Ranked choice voting (RCV) is the best way to allow greater voter choice without wasted votes and unrepresentative winners.  RCV was used successfully last year in Maine’s congressional election and has been adopted for elections in 22 American cities and counties and the national legislatures in Australia and Ireland and for most party leader elections in Canada, New Zealand and the United Kingdom.
The biggest news this week may be that the U.S.government shut down has ended - at least temporarily - which is an enormous relief for the millions most impacted and an interesting commentary on the key roles that women are playing. This piece in Politico describes the response from conservative women to the announcement and the leadership of the Speaker of the House that helped to force the decision. 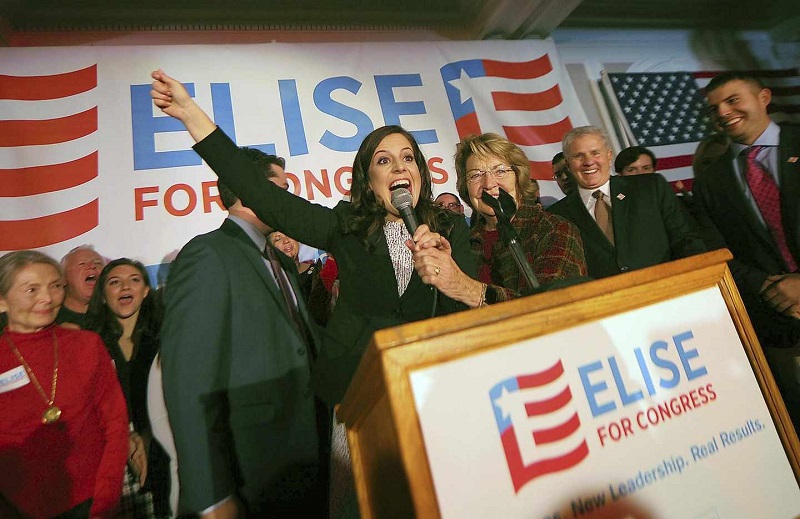 Sabrina Schaeffer, a member of the board of directors at RightNow & chair of the Leadership Circle at the Independent Women's Forum, had an excellent piece in Real Clear Politics about the need for more conservative women candidates:

Without more women, Republicans are going to continue to lose elections they could otherwise win. In the 2018 midterms, Democrats gained 41 seats in Congress; 13 female Democrats unseated male Republicans. That is a third of the seats Democrats won. Nearly one-fourth of the new Congress is female. Out of 127 female members, 106 are Democrats.

In the age of Donald Trump’s populism, Republicans already have a big barrier to overcome with many women. (At an event I spoke at recently, nearly every right-of-center participant worked to distance herself from the current administration.) But these women – and many more – are still committed to sensible, limited-government policies in which Americans of all races and creeds will have more freedom and opportunity. Kristin Rowe-Finkbeiner had a thoughtful piece "Pelosi and my Oma: Older women rule" on CNN about the strength and wisdom that 'older' women bring to all they/we do:
Just last week, as my cousin and I got ready for our Oma's 103rd birthday dinner, we looked at each other in the mirror and started talking white hair. Both of us are in the midst of midlife changes, and we are still struggling to embrace our aging.
Our Oma is all in though, and always has been. Just like Pelosi, who was born decades after Oma, she breaks the mold, proving that it's time to throw the negative framing of older women out the window. In fact, at 103, Oma is still smart as hell, gorgeous, witty, and has a youthful twinkle in her eyes.
We have a lot to learn from the women who came before us about aging, power and thumbing our noses at our nation's shortsighted thinking about older women....
As we age, we rise up in leadership and we get smarter.
We have to change our perspectives and recognize older women as just as smart and powerful as any of those "silver fox" older men.
Erin Forrest, the executive director of Emerge Wisconsin, shared this very informative piece on women in state legislatures by Hayley Sperling in the Cap Times:

More than a few national political observers hailed 2018 as another "Year of the Woman" following a previous declaration about the 1992 elections. While it may be simple to make such generalizations in national terms, determining how women fare in state-level elections is a different story.

Over the past three decades in Wisconsin, the number of women in each legislative class has been on average about one-quarter overall. The sessions with the most women were 1989-1990 and 2003-2004, each reaching 28 percent. The state's incoming 2019-2020 class fell just short of reaching that mark, with 27 percent women, according to an analysis by the Wisconsin Women's Council. A state agency aimed to promote and enhance the well-being of women, the 15-member council is appointed by the governor and the Legislature's leadership, and consists of both public and legislative members. 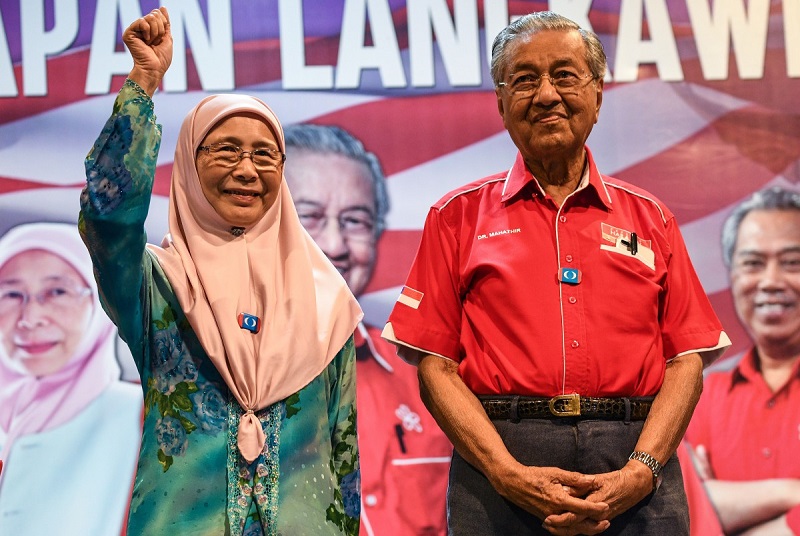 There was an interesting article on News Skills about the continued under-representation of women in parliaments in Asian nations:

An important point to be noted is that there are quite a few Muslim countries, which although have gender quotas, but continue to boost more male members in parliament. Countries falling under the categories include Kyrgyz (19.2 percent), Uzbekistan (16 percent), Indonesia (17.1 percent) and Jordan (15.4 percent).

The growth of women’s parliamentary representation is based on a combination of various socio-political variables, including Gross Domestic Product (GDP) per capita, electoral system types, gender quotas, the share of Muslims in the population, the female-male ratio in the workforce, the degree of democracy, and perceptions of corruption...

Muslim societies with a significant number of female MPs have a reserved seat policy as a form of gender quota: Afghanistan has 27 percent seats reserved for women, Saudi Arabia has 20 percent, Iraq reserves 25 percent, Pakistan 17 percent, and Bangladesh has 14.3 percent.

While an article on Ghana Web reports on the momentum building in Ghana for a 30% gender quota for women candidates and the need to 'gather courage' to advance women's representation:

A gender advocate, Comfort Darbo, has backed an appeal made by Ghana's Speaker of Parliament for government to consider increasing women participation in local governance in the country.

Professor Michael Oquaye, had called for more efforts on affirmative action to maximize the political influence of women in terms of decision making in the country.

He advocated that all the major political parties in Ghana currently controlling political affairs must gather courage and reserve quotas for women in their strong areas.

Finally, a number of sister organizations are co-hosting Running Start's Young Women to Watch Awards on February 12th at the Canadian Embassy in Washington, DC! Buy your ticket here or let me know if you'd like to attend as a guest of RepresentWomen! 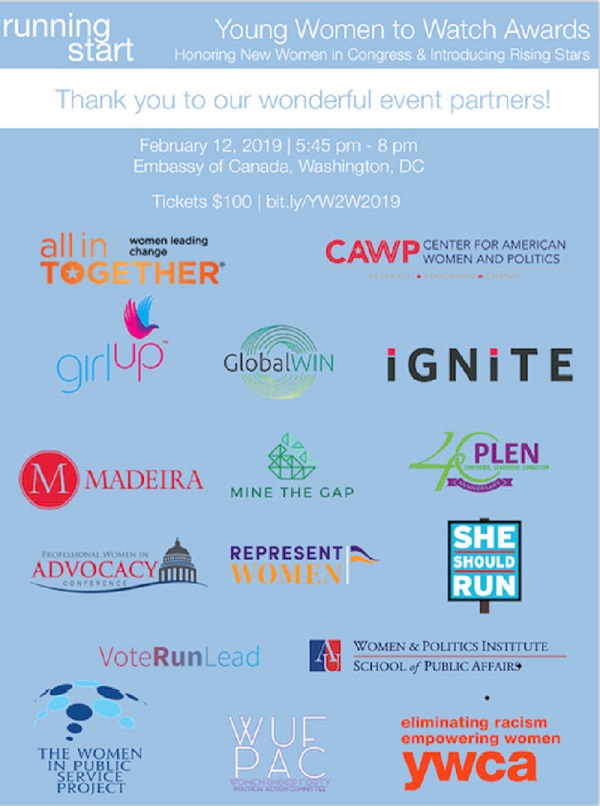 All the best for a great weekend,
Cynthia
P.S. This week we celebrated the birthday of Martin Luther King, Jr who wrestled so capably with designing effective, multi-faceted strategies to advance civil rights - I am glad to working with so many of you to craft strategies that weave together the many threads of our work into one strong, cohesive movement.