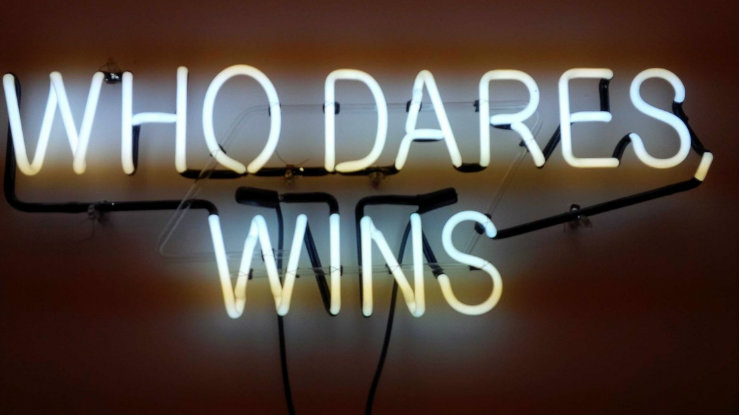 (from the fabulous offices of Whitman Insight Strategies - seems like a fitting challenge to us all!)

I hope you have all had a great week and that those of you in the path of this blanket of snow are safe and sound. How fortunate we all are.

Exciting news on gender parity from Iceland this week - Cassie Werber from Quartz writes that "Iceland could be the first country to close its gender gap completely." I know that several of you have spent time there and I plan to take my daughters there in June to celebrate their graduations from high school and college. Sounds like more of us should be planning visits there to study their success and soak in the good gender balance vibe.

Another good international story is this piece from the New York Times on The Push for Gender Equality at the Davos World Economic Forum, and Beyond. I know listserv member Laura Liswood has attended that forum for many years - perhaps she can update us on progress toward parity at Davos?

There was a very interesting interview on Huffington Post with Iris Bohnet, a professor at Harvard's John F. Kennedy School of Gov't, who spoke about The Surprising Way Portraits of Powerful Women Change the Mindsets of Girls.

There were several stories of interest here at home this week.

The Star Tribune editorial board writes about Wilhelmina Wright who was elevated to the federal bench - the first African-American women to serve in that capacity.

Marianne Schnall has a piece on Mogul in which she shares Gloria Steinem's thoughts on Have We Made Any Progress Toward Gender Equality? Steinem is on tour now to discuss her bestselling memoir, My Life on the Road.

The Progress Index reports that Lashrecse Aird is the youngest woman to have been elected to the Virginia House of Delegates.

Another book caught my eye that you may want to review is Broad Influence: How Women Are Changing the Way America Works by Jay Newton-Small.

And in NFL news, the Buffalo Bills named Kathryn Smith  to be the team's "quality control-special teams coach." Secretary of Labor Tom Perez, a Buffalo native, praised the decision saying "Congrats, Buffalo Bills and Kathryn Smith for shattering the glass ceiling! Kathryn will be a great addition to the team. Proud to see my home team making history and paving the way for greater equality in the NFL."

Many thanks to Brittany Stalsburg and Bernard Whitman of Whitman Insight Strategies who hosted a lovely reception for Representation at their offices in NYC on Wednesday. I look forward to many more opportunities to conspire with groups large and small about new strategies to transform the political landscape within our lifetimes.

P.S. This piece on Bustle reminds us of 5 Women Civil Rights Leaders You Should Know!