Members of the Virginia House of Delegates cheered for Delegate Jennifer D. Carroll Foy, center, a sponsor of a resolution to ratify the Equal Rights Amendment.Credit...Julia Rendleman for The New York Times

Dear all,
One hundred year ago, suffragists - who were nearly all Republicans (including my Quaker ancestors) - were on the brink of winning the franchise. Soon thereafter, emboldened by their success with suffrage, Alice Paul and Crystal Eastman wrote the first Equal Rights Amendment which was introduced in Congress in 1923. Despite opposition from human rights stalwarts like Eleanor Roosevelt, support for a modern ERA grew through the 1960s & 1970s until it was a standard plank in party platforms of both the Republican and Democratic parties.
Representative Martha Griffiths - the first woman elected to Congress from Michigan - re-introduced the ERA in Congress in 1971 where it was approved by the U.S. House of Representatives on October 12, 1971 and by the U.S. Senate on March 22, 1972.

After passage in Congress it was sent to the states for ratification which triggered an intense period of organizing led by Molly Yard, Ellie Smeal, Gloria Steinem and many others to ensure passage. This clip from a piece in The New York Times relays that primary opposition to the ERA was not from the masses nor from either major political party but instead from one woman, Phyllis Schlafly:

The undoing of the E.R.A. is largely considered the handiwork of one woman: Phyllis Schlafly, a proudly anti-feminist Republican, who rallied housewives to fight the amendment in the 1970s.

Her argument was mostly that women already had equal rights, but also that the E.R.A. would tear apart the traditional family structure and strip women of remaining privileges, such as having separate bathrooms and college dormitories for men and women. These are the same arguments opponents have made in recent years as E.R.A. efforts picked up steam. As most of the readers in the United States know by now, the state of Virginia, with a new surge of women's leadership, passed the Equal Rights Amendment this week as this story from the Washington Post reports:

Both chambers of Virginia’s General Assembly passed the Equal Rights Amendment Wednesday, fulfilling a promise that helped Democrats seize control of the legislature and marking a watershed moment in the nearly century-long effort to add protections for women to the U.S. Constitution.

The lopsided votes capped an emotional week in which Democrats — particularly female lawmakers, who now hold unprecedented positions of power in Richmond — celebrated history in the making.

The House gallery was packed beyond its 102-seat capacity, with Virginia first lady Pam Northam and her daughter, Aubrey Northam, making a rare appearance to bear witness. ERA supporters attended from around the country, many wearing sashes from long-ago marches for women’s equality.

“What happens in Virginia impacts the entire country and will reverberate across the globe,” said Betty Folliard, the founder of ERA Minnesota, who traveled to Richmond to watch the votes.

While the future of the ERA is unknown at this point this is a real milestone for the thousands of advocates who have spent a lifetime working for this basic assurance of equality. In 1992, I had the opportunity to run a campaign for a state ERA in Iowa which turned out to be quite an experience. The Clintons were both campaigning in the state and Pat Robertson, Phyllis Schlafly, and poured resources into the state to oppose the measure. I even got to debate Ralph Reed on Larry King Live! We lost that campaign but I got the chance to work with Kathy Spillar, Dolores Huerta, and Ellie Smeal from the Feminist Majority - and I got this nice mug that still sits on my desk reminding me of the work that came before us and the work ahead. There was very encouraging news this week from Gabrielle Fitzgerald at Panorama who announced the launch of the Ascend Fund to advance women's representation and leadership in the United States. It was great to see this news coverage of the announcement on NBC:

Panorama Global, a nonprofit group, is sponsoring recruitment and training programs for women running for elected office across the country.

The Ascend Fund, announced on Tuesday, is the latest venture for Panorama Global to get involved in gender parity in elected offices. The group received its seed money from Melinda Gates’ investment and incubation company Pivotal Ventures.

Chief executive officer and founder Gabrielle Fitzgerald told NBC News that the fund is one of their “biggest and most prominent” grants yet, and is actively looking to work with nonpartisan and nonprofit organizations that recruit and train women to run for office.

“There are barriers that exist that make it hard for women to run for office,” Fitzgerald said. “It requires you to be away from home, and oftentimes today, women are still the primary caregivers.”

Fitzgerald continued that aside from systematic barriers that preclude women from running, the lack of female candidates creates a pipeline problem for possible recruits.

Two groups have already received three-year grants: New American Leaders and Vote Run Lead. New American Leaders focuses on recruiting and training people of color, immigrants and refugees to run for state legislatures. While they work with both men and women, they will only use money from The Ascend Fund on programming for women. (From the Ascend Fund announcement)
There was a sobering story in The Independent about the under-representation of women in politics in the UK that cites a new report from the Fawcett Society and quotes from one of the UK's leading experts on women's representation Sam Smethers:

Men dominate every sector of public life and equality for women remains “generations away” because progress on gender equality is “dismally slow”, a report has found.

The Fawcett Society says the under-representation of women in politics, the law, trade unions, the civil service, charities, professional institutions, and sports bodies is “consistent and persistent”.

The leading women’s rights charity’s 2020 Sex and Power Index found gender equality was “alarmingly” worse for women of colour who are totally absent from senior positions in many sectors.

Sam Smethers, Fawcett Society chief executive, said: “Despite much lip service about the importance of having women in top jobs, today’s data shows we are still generations away from achieving anything close to equality. We are wasting women’s talent and skills.

“Small, incremental changes in women’s representation are not good enough. For years, we have been told that equality for women is just a matter of time and we should be patient.

“But at this rate, our great-grandchildren will still be producing data that shows women missing from the top of public life and business. We have seen that real change can be delivered if there is a willingness to make it happen. That means quotas, targets and policy interventions to remove the barriers to women’s progression.” And more sobering news, NPR reports on the 41 women who should be in the Rock and Roll Hall of Fame - including Dolly Parton - pictured above, who is not:
The latest round of Rock & Roll Hall of Fame inductions were announced today, and Whitney Houston is the only woman honored. This visible problem offers yet another chance to decry the gender imbalance within Cleveland's canonizing institution, an inequity that's been reported again and again, most powerfully by my friend and colleague Evelyn McDonnell, who crunched some numbers recently and came up with a staggeringly low percent of representation for women.
Since feminists began throwing light on this subject, many have made lists of potential women inductees, but perhaps these efforts haven't gone far enough. In the spirit of aggressively pointing out the obvious, here's a playlist list of women who could be in the Rock and Roll Hall of Fame, consisting (mostly) of artists who issued debut recordings in every year represented by the inductions so far. You'll note that this challenges narrow definitions of rock and roll — which is exactly what needs to happen, and is happening, as the Hall strives to remain relevant and historically accurate. Women have long expanded frameworks that otherwise wouldn't accommodate them. Gender balance at the Rock & Roll Hall of Fame solves more than just a simple numbers problem – as diversity in practice always does. 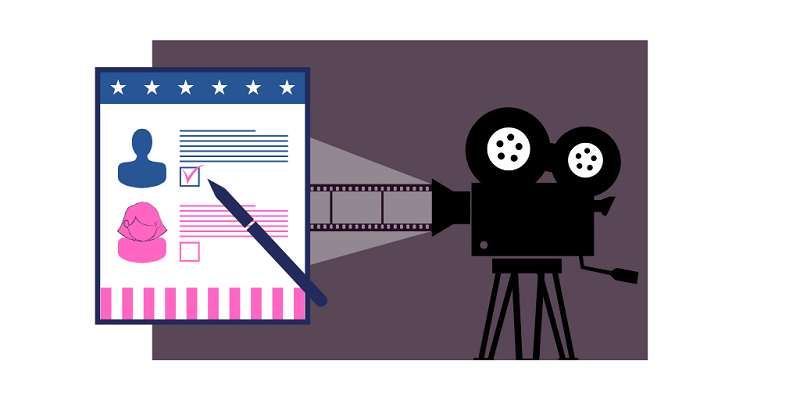 Women also have a very difficult time breaking into segments of the entertainment industry - especially those without clear female categories as are used for Best Actress and Best Supporting Actress in the Oscars and the Golden Globes. RepresentWomen fellow Maura Reilly wrote this great piece on the challenge for women directors:

In 2019, 12 of the 14 women-directed movies landed on the list of 100 top-grossing films of the year; and yet the 2020 Oscar nominations released this morning are only 31 percent women, and only one woman-directed film was nominated for Best Picture. Many of the 12 women-directed films also received higher scores on Rotten Tomatoes than Tarantino’s Once Upon a Time In Hollywood, which received Oscar nominations for Best Picture, Best Director and Best Original Screenplay. The Oscar categories of Best Picture and Best Director were hotly anticipated following the shut-out of women directors and their movies in the Golden Globes held earlier this month. However, the Oscar nominations show little improvement, no woman was nominated for Best Director and Greta Gerwig’s Little Women was the only female directed Best Picture nomination.

The absence of women from some of the most sought after film and television awards comes on the heels of clashes over the continued need and role of gendered categories in award shows. The disavowal over gender-specific categories for awards comes as a response to the growing number of performers nominated for awards who are gender non-conforming and transgendered, who often feel constricted by the gender binary award categories. Many feel the requirement of being nominated or submitted for nomination in a gendered category is unfeeling and archaic. Asia Kate Dillon, an actor known for their role in Billions, said on the topic “at this point, it feels unacceptable and unnecessary.”

Dillon’s argument is sound, it is unacceptable that we force individuals to conform to often antiquated ideas on gender in award shows; but, the elimination of gender-specific award categories can suggest Hollywood no longer has a gender inequality problem. As Vanity Fair writer Mark Harris puts it, “merging gender categories would create cosmetic definition of equality in an industry where we know that equality does not exist […] It’s placing this huge bet that sexism is so solved that it doesn’t need to be paid attention to.”

In fact, several award shows which have done away with gender categories fail to nominate and award women at the same rates as men. The Television Critics Association (TCA) changed their gendered awards to “individual achievement” for drama and comedy in 1997; in the past 22 years, men won 28 of the individual achievement awards, 15 for drama and 13 for comedy. In 2017, TheWrap found of the five gender-neutral awards given by the TCA, BAFTA and MTV, two-thirds of nominees have been men, and men have won 70 percent of the awards. Men are overwhelmingly winning “gender-neutral” awards not because they produce inherently better work and more of it; but because our culture’s gender-neutral state is default-male.

That's all for this evening,
Cynthia
P.S. I had a fabulous visitor from Australia this week -  women's representation champion and elected official Coral Ross. She is incredible and she left me this koala.