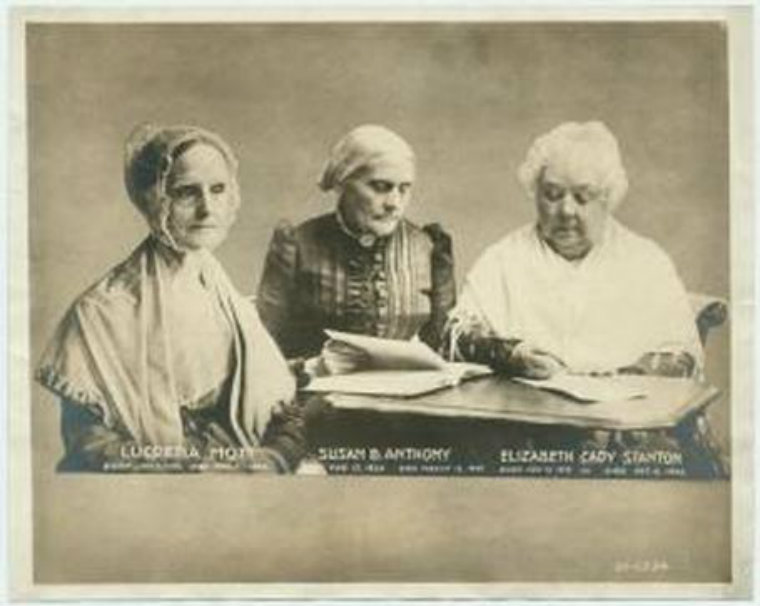 Susan B. Anthony - champion of women's suffrage and equality lived from February 15, 1820 to March 13, 1906. Her arrest for voting in 1872 led to a very public trial. In 1878 she and Elizabeth Cady Stanton petitioned Congress for the right to vote - this amendment, widely known as the Anthony Amendment, became the 19th Amendment to the U.S. Constitution in 1920.

The issue of women candidates dominated the news this week.

Brittany Stalsburg of Whitman Insight Strategies had a great piece today in HuffPost Politics on the roll of gender in the presidential race entitled Hillary Clinton Supporters Are Not Stupid For Caring About Gender. Read and share if you are so led!

South Carolina governor Nikki Haley endorsed Marco Rubio this week - making her an obvious choice as a running mate. She would make a formidable VP candidate if Rubio were to win the nomination.

MAKERS published a list of Reasons Why Women Need to Be In Politics - I think we all agree with number eight - "every time another woman runs for office, she shows the women and girls around her that it's a viable, important opportunity."

The New York Times asked readers "Tell Us: Is It Important to Elect a Woman as President" - thousands replied - and their responses are as thoughtful as they are varied.

Two sources delved into the question about support for women candidates between and within political parties.

FiveThirtyEight asked voters a series of questions designed to ferret out differences between the two major parties and among candidates within the parties. The contrasting views are fascinating and worth a careful read.

FairVote and the College of William and Mary partnered with YouGov to conduct an online national survey of 1,000 Republican and independent voters, with innovative presidential candidate rankings and detailed analyses of voter opinion on electoral reforms. You can find a summary and a link to the full report - that shows how use of ranked choice voting would impact outcomes in the Republican nomination contest - here.

I was particularly struck with respondents' answer to our questions about changes in the composition of Congress by 2030. There was general support for a more representative Congress, including more women, racial minorities and third parties. Of those with an opinion, fully 81% support more women in Congress. Although only 13% of respondents strongly favored more women, just 2% strongly opposed it. Support across most demographic categories is reasonably constant. Differences that stood out for me include: 88% of women favor it, as opposed to 75% of men, and 12.1% of men expressed clear opposition to it as compared to just 3.6% of women; strong support is 19% for those under 30 as compared to 12% for those over 30. Only 3% of Ted Cruz backers strongly supported it as opposed to more than 20% of backers of Jeb Bush, John Kasich and Rand Paul.

In international news, Democratic Audit UK reports on the work of Mary Nugent and Mona Lena Krook whose works dispels myths around quotas and women candidates.

I saw Michael Moore's latest movie Where to Invade Next - while the movie has a great overall message there is an especially powerful segment on women's equality in Iceland that brought tears to my eyes. Jane Fonda, Gloria Steinem and others reflect on the status of women in the U.S. after the trailer on the website. One of the Icelandic women interviewed has this to say " If the world can be saved it will be women who do that." Indeed...

Finally, in October of 1975, women in Iceland who were feeling unrepresented and powerless went on strike - over 90% of women participated. Read the inspiring story about the event that changed the landscape for women in Iceland!

Have a great weekend,

P.S. Three cheers for the Institute for Women's Policy Research which was named a "Top Think Tank" by a Univ of Pennsylvania study. Stay tuned for their release of the groundbreaking Status of Women in the South report at Spelman College on February 26th.

The Democracy Studies program at The Ohio State University is hosting an all-day session on Women in American Democracy on Monday, March 7 in Columbus, Ohio. Check out the website for more information about speakers and registering.