Last week I wrote to you from northern California and I am still in California! It has been a busy week of racing around the Bay Area for terrific meetings with allies & reformers. A number of you wrote last week that you would like to get plugged into the systems reform work - my goal for 2019 is to make that happen! Stay tuned for more on that!
This weekend I am working with FairVote staff to organize three events that you are welcome to attend if you are anywhere close - please join us as my guest:
There have been a bevy of stories on the women elected to state and federal office in November, 2018. Here are a few of the pieces that caught my eye:
This story in the Martinsburg Journal reports that women now compose 40% of the congressional delegation from West Virginia which is due in part to higher numbers of women winning in the state's multi-seat districts. The states that use multi-seat districts tend to have more women running for statewide executive and federal offices because more women run and win at the state legislative level. Read more about the impact of multi-seat districts in this pieceby RepresentWomen intern Shayna Solomon.

The Friday before election day, Carol Miller — soon to be elected as the next U.S. representative for the 3rd Congressional District — took the stage after being introduced by President Donald Trump to the crowd at Huntington Tri-State Airport for one final rally.

Standing nearby was the first woman elected to the U.S. Senate in West Virginia history, Sen. Shelley Moore Capito, who had warmed up the crowd at the start of the rally. With Miller’s election on Nov. 6, West Virginia’s five-member congressional delegation is now three men and two women.

“Having 40 percent of our congressional delegation women is, I think, a great statement about the respect that West Virginians have for women as women leaders in public service,” Capito said. “I’m just proud that West Virginia is one of those states that have broken through that barrier.”

Miller, a Republican from Huntington, is a six-term member of the West Virginia House of Delegates. First elected in 2006, she is the majority whip for the House. She defeated state Sen. Richard Ojeda, D-Logan, 56.37 percent to 43.63 percent according to unofficial vote totals from the West Virginia Secretary of State.

There was a very interesting piece in Forbes by Dr Audrey Murrell about the impact of women's leadership across various sectors:

A great deal has been written about the pathways and barriers to women’s advancement into leadership positions. Concepts such as the glass ceiling, concrete walls, sticky floors and career labyrinths have received significant attention in research and popular media. The recent advancement of women into key leadership roles in business, higher education and government are seen by many as positive signs of change.  For example, the College of William & Mary, the second oldest institution of higher education in the U.S., recently named Katherine Rowe its first-ever female president. The recent midterm elections witnessed a record 110 women elected to Congress, including several “firsts”: the first Native American woman, Muslim woman, Somali-American woman, openly LGBTQ woman, youngest woman and African American woman representing Massachusetts are all headed to Congress next year.

A terrific piece in Elle Magazine by Jill Filipovic profiles the women elected to the House this year - the graphics are amazing:

It was Ayanna Pressley, at the airport, who finally got to me. This past November, two years after Donald Trump lost the popular vote but still won the White House, a record number of women swept to victory in the midterm elections. When they are sworn into Congress on January 3, among them will be the first Muslim congresswomen, the first Native American congresswomen, and the first African American congresswomen from New England—Jahana Hayes and Pressley. En route to freshman orientation in Washington, DC, Pressley tweeted a photo of herself at the airport, looking jaunty in an olive coat and page-boy cap. The photo caption referenced the movie Mr. Smith Goes to Washington, but Pressley advised her followers to “scratch that,” and replace Mr. Smith with “Sandy Pressley’s daughter, Mrs. Ayanna Soyini Pressley Harris.” She then thanked the late Shirley Chisholm, the first black woman elected to Congress and a 1972 presidential candidate.

And this piece from Politico discusses women's representation in the world behind the candidates - I worked for years in the campaign world and can attest that these very real barriers exist:

POLITICO Magazine interviewed more than 50 women for this article, seeking to understand how and why they feel shut out of the high profile and often lucrative business of politics. Most of the women spoke on condition of anonymity for fear of losing business—or worse, clout. They are Democrats and they are Republicans. They are pollsters, spokeswomen, television ad makers, fundraisers, direct-mail vendors, digital strategists, donors, lobbyists, candidates and even sitting members of Congress.

Over and over in interviews, they portrayed an enraging, often futile struggle to be taken seriously by colleagues and candidates alike—including by candidates who are themselves women.

“There’s a sense of shame in feeling like you’re just not wanted,” said a former Democratic fundraiser.

They frequently describe themselves as left out of the most important big picture decisions on campaigns—“they won’t let us in on the sexy part of politics” is how the former Democratic fundraiser put it. They fret about the opportunities they’ve been denied on major statewide campaigns, if not presidential races. They shudder at the thought that sexism has cost them hundreds of thousands of dollars (if not millions) over the course of their careers. They stew about the solid advice and creative ideas they’ve offered that have been ignored in favor of those from men.

And finally, here is a piece from Vox that provides a very good rundown on the new Congress about to begin its work:

The midterms swept in a historic new class of diverse lawmakers who are due to dramatically reshape the centuries-old government body and transform not only the kinds of policies that end up being prioritized but also how Congress actually functions on a day-to-day basis.

The incoming class of lawmakers now has a record-breaking number of women, people of color, and LGBTQ representatives — and they’ve already begun to shake things up. Because so many of the new House members are mothers with small children, for example, the Capitol is now adding baby-changing tables in the members-only bathrooms and considering possible changes to its working hours, Politico reported. 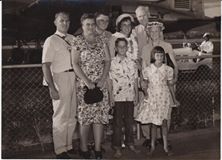 (Aunt Helen leaving Hawaii to attend college on the Mainland - after WWII)
Today is of course the anniversary of the attack on Pearl Harbor. Growing up I was mesmerized by the story of my dear aunt Helen - whose birthday it was - running home from Quaker Sunday school along the ridge above her home in Honolulu  while the Japanese planes flew low enough for her to see the men inside. Her family had had and maintained deep connections with the Japanese community during and after the war. I am reminded that the world is complex, that peace is precious, and that nurturing relationships across communities and cultures is central to our ability to survive and thrive.
All the best for a relaxing weekend as we confront the headwinds of serious challenges to to our democratic institutions.
Warmly,
Cynthia
P.S. It has been great to visit with a number of you in this last week - so energizing to meet in person - thank you! Donna Hall, director of WDN, holding her prize Resistance by Design scarf featuring women electeds :) 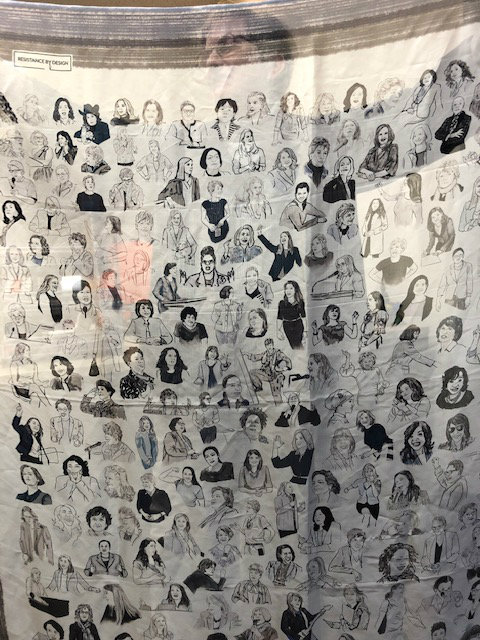