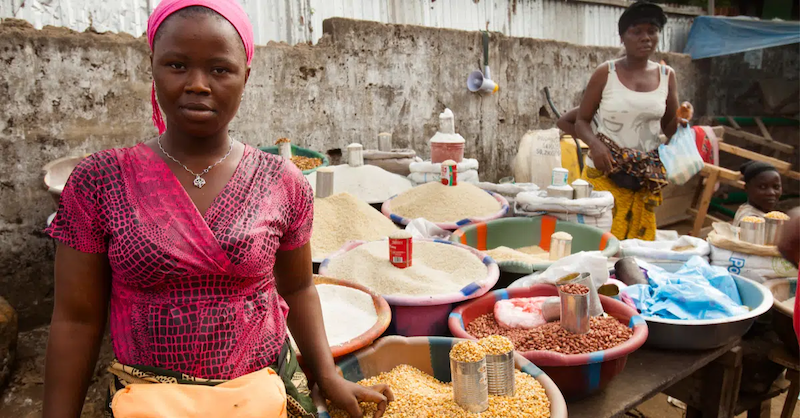 Many women around the world—as with these traders in Liberia—work in the informal economy (ImageArc/shutterstock.com)

Dear fans of gender balance in politics,
Those who are concerned about the health of democracy in the United States - which I believe should be all of us - would do well to read this sharp piece by

Irune Aguirrezabal about a new social contract based on meeting the needs of women:

It is imperative that the new social contract embodying the emerging economic, political and cultural paradigm is built, conceptually and in practice, with a clear understanding of the reality of women worldwide. For once, women’s social citizenship must be embraced. This means overcoming the public/private—male/female dichotomy and addressing as a global emergency public spending, including through public-private partnerships. The goal would be to ensure co-responsibility in the use of time, in caring and domestic tasks.

The ‘Cornwall consensus’ provides us with a glimpse, in governance terms, of an associated ‘gender-parity democracy’, which must be founded on three principles. Of course two are freedom and equality, but freedom must also mean freedom from gender-based harassment and violence, and equality must mean substantive gender equality, with men and women having the same conditions and opportunities to develop their personal and professional lives—which necessarily implies the masculinisation of care.

The third principle is both an objective and a tool to achieve substantive gender equality and freedom. It is gender parity—equal voice and influence in decision-making. 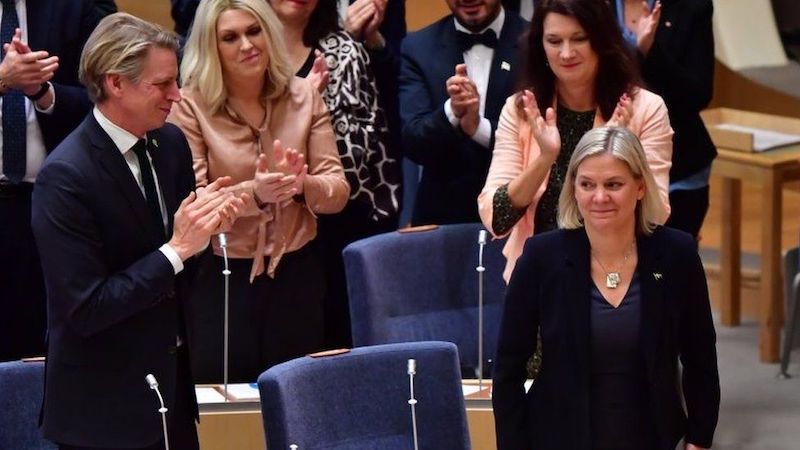 Electing more women to executive leadership positions is central to building government policy that reflects women's perspectives so I was glad to read that Sweden's first woman prime minister is back in office after a brief hiatus:

There are around two dozen current female heads of state or government, according to U.N. Women, the U.N. agency focused on gender equality. Around half of those women head European countries, and the agency said gender parity in high political office will not be reached for another 130 years at the current rate.

Andersson won her second tilt as prime minister by a narrow margin, and experts predict that next year’s election will also be a difficult race. At Monday’s news conference, however, she painted an upbeat view of the political future. 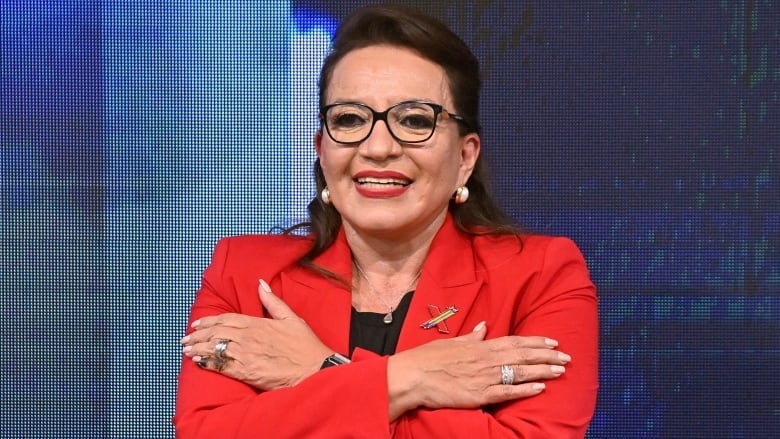 President-elect of Honduras Xiomara Castro
Voters in Honduras just elected a woman president for the first time ever according to this story in The Washington Post:

Castro, 62, will be the first female president of the Central American country. The wife of Manuel Zelaya, a former president who was removed from office by the military in 2009, Castro ran on an anti-corruption platform with promises to end what she deemed a narco-state.

Castro has said she would prioritize migration in talks with the Biden administration, but has referred to it “as a social fact and as a right” — an outlook which seems to diverge from the U.S. focus on deterrence. Biden has so far struggled to find leaders in Central America to partner with the administration on migration policy.

Castro will return to the presidential palace more than 12 years after her husband’s ouster. Zelaya, whose leftward political shift brought him closer to Venezuela’s Hugo Chávez, drew the rancor of the country’s political and economic elite. He was forced by soldiers onto a plane bound for Costa Rica.

Zelaya was his wife’s campaign manager. His role in her government remains uncertain. 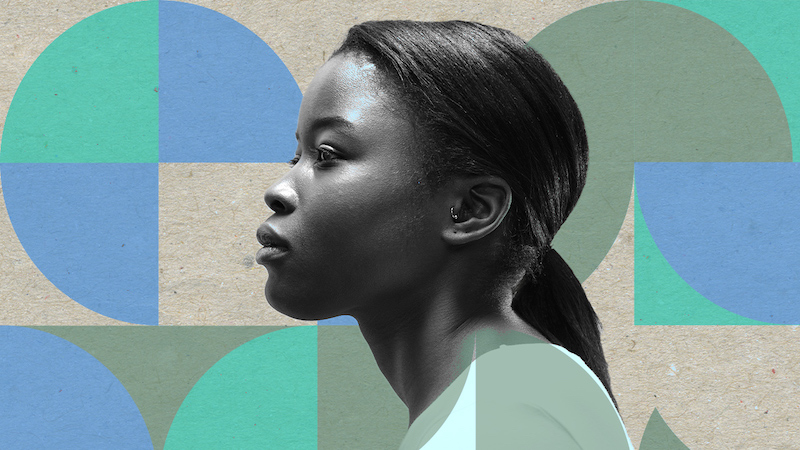 There was an excellent article in the Harvard Business Review by Siri Chilazi, Iris Bohnet, and Oliver Hauser about a new strategy called the gender proportionality principle to achieve gender balance in the corporate sector:
Consider the following scenario: A company’s entry-level workforce is approximately half women and half men, but the proportion of women drops slightly at every level. Only about 38% of managers are women, then 33% of directors, 28% of senior vice presidents, and 21% of C-suite executives. A deeper dive into the data reveals that the drop-off of women is primarily driven by gender disparities in promotion rates, not gender differences in hiring or retention.

If this scenario sounds familiar, it’s because it is. We borrowed the specific numbers from the latest McKinsey/Lean In Women in the Workplace study, which reflects average demographic realities at 317 North American companies. The report underscores the fact that career advancement, rather than recruitment, is where many companies need to target their efforts to further gender equity in their organization. While efforts to diversify the “pipeline” remain important, especially in industries like tech and finance, if companies are not able to develop and promote the women they hire, it will be very difficult for them to reach gender parity, or anything close to it, at senior levels.

To address this challenge, we’ve identified a concept that’s as simple and straightforward as it sounds: the gender proportionality principle (GPP). Importantly, it is also achievable and, in our experience, often widely supported across organizational ranks. 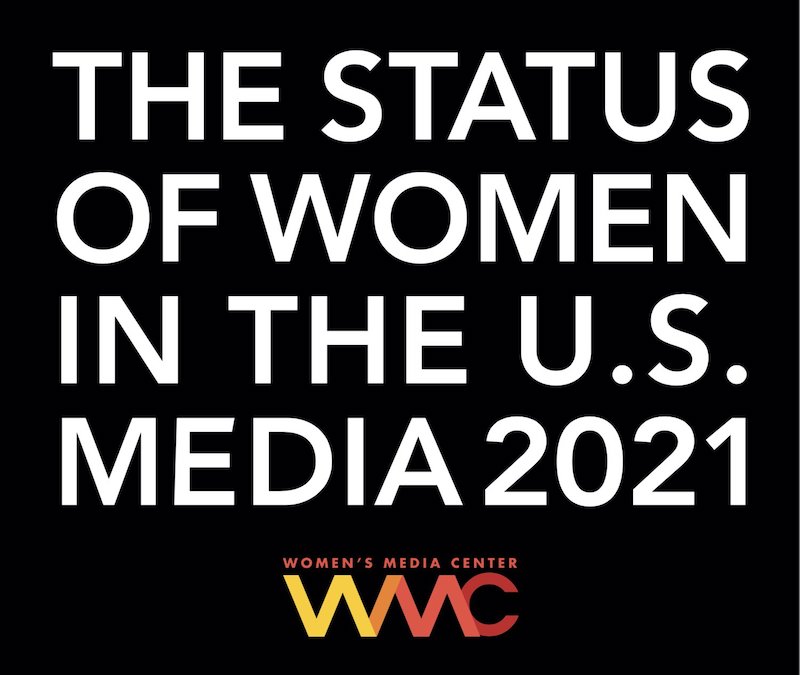 The Women's Media Center released a new report on the status of women in the media in 2021 that calls for greater focus on ensuring more women and people of color are represented in the media:
In the foreword to a new report titled "The Status of Women in the U.S. Media 2021" compiled by the Women’s Media Center, Julie Burton, president and CEO, notes that the report "draws data from 110 studies (and features over 350 charts) that together tell us the standing of women across all media, including legacy and digital news platforms, film, television, radio, technology, literature, and more."

She wrote: "What this new report shows is that in all realms of media, representation and visibility of women are sorely lacking. The implications of this relative lack of power and visibility are profound for media and for democracy." 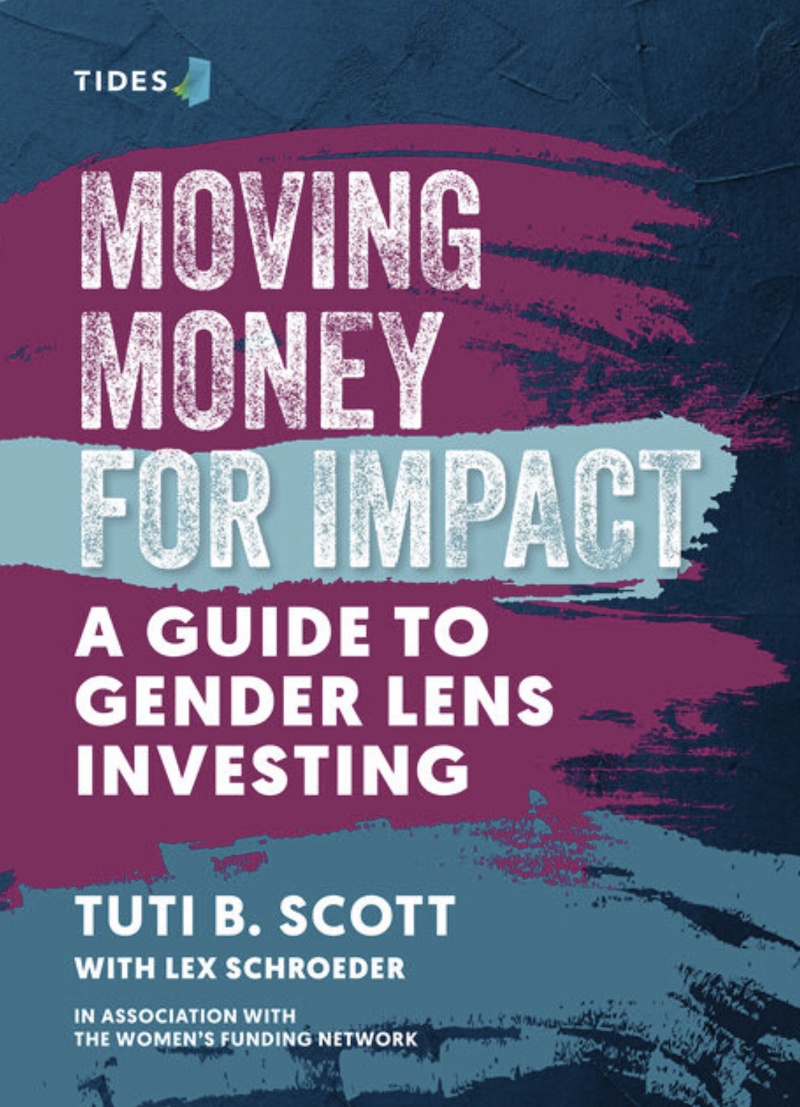 Tuti Scott's guide to Moving Money for Impact
I was very glad to read this article on CNBC about the growing reach of gender lens investing - my friends Tuti Scott and Kristin Hayden are helping to lead this vital and transformative work:
At investment manager Nia Impact Capital, pushing for gender equity is an ongoing endeavor.

The firm’s $470 million Global Solutions Equity Portfolio consists of 50 companies that not only have women in leadership positions but also offer products and services that are beneficial to women and girls (such as breast cancer research).

Nia votes all proxies, as well as talks to companies specifically about diversity, inclusion and gender issues, and shares best practices related to fair pay, diversity and recruiting techniques.

“We’re engaging actively with every company, bringing our investor voice as a right and responsibility as far as what the world needs,” said Kristin Hull, CEO and founder of Nia. 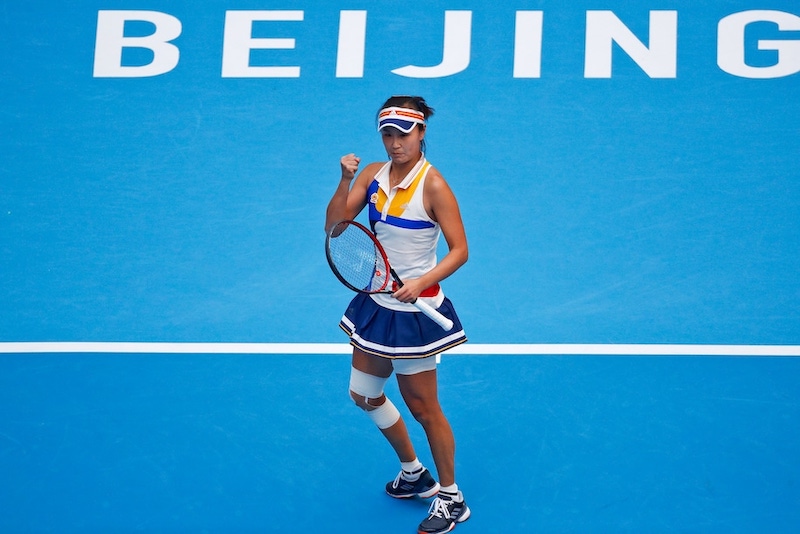 The WTA suspended all its tournaments in China because of concerns about the safety of Peng Shuai. (Andy Wong/ AP File)
Women are flexing their considerable financial power in professional sports as well. Sally Jenkins wrote a very compelling piece for The Washington Post about the decision by the Women's Tennis Association to forgo tournaments in China in protest of human rights abuses:
The WTA stands up in decency, while the rest of sports bows to China’s tyranny Now the rest of the world needs to kick China off the sports circuit, too. The decision by the Women’s Tennis Association to forgo playing tournaments for the benefit of the Party-State is a prescient and powerful move that ought to trigger a broader moral blockade. China’s regime is the modern equivalent of an apartheid, and as Arthur Ashe proved in his brave day, the way you end an apartheid is to isolate, embarrass and ostracize it. Sports boycotts work.

The WTA just made it a lot harder for other organizations to unembarrassedly coddle or cooperate in China’s governmental brutalism, slavery, detentions and repressions such as the one Peng Shuai apparently experienced after accusing one of President Xi Jinping’s allies of sexual assault.

It will cost the WTA a billion dollars or more to suspend tournaments in China until former doubles champion Peng “is free, safe, and not subject to censorship, coercion and intimidation,” as chief executive Steve Simon said in a statement. If it seems unlikely that Simon should prove a tougher leader than various heads of state or the complicit International Olympic Committee, just remember what Ashe once said: “True heroism is remarkably sober and very undramatic.” 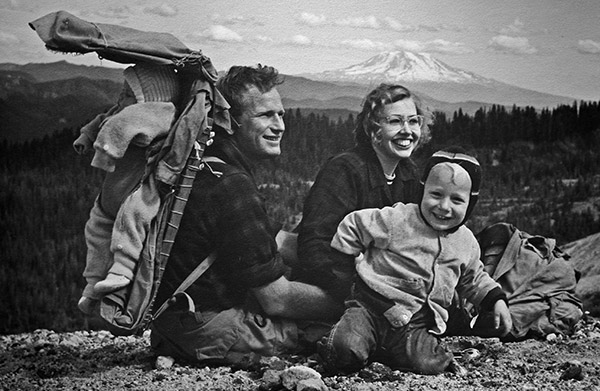 Jolene Unsoeld with her husband Willi and son in Nepal
The first woman I helped elect to Congress, Jolene Unsoeld, died this week at her home in Olympia, Washington....Jolene was an extraordinary person who served in Congress with passion and integrity. She and her mountaineering husband Willi Unsoeld - who also founded Evergreen College - made quite a team and raised four amazing children. Her race in 1990 was the most expensive in the country that year, and she was vilified for being an environmentalist, yet she persisted, and won. I will really miss her but her leadership inspires the work ahead. Thank you Jolene.

I hope that you might consider investing in equality by donating to RepresentWomen in 2021! We just completed a strategic planning process and are building our capacity for maximum impact in 2022! Thanks in advance for your support! 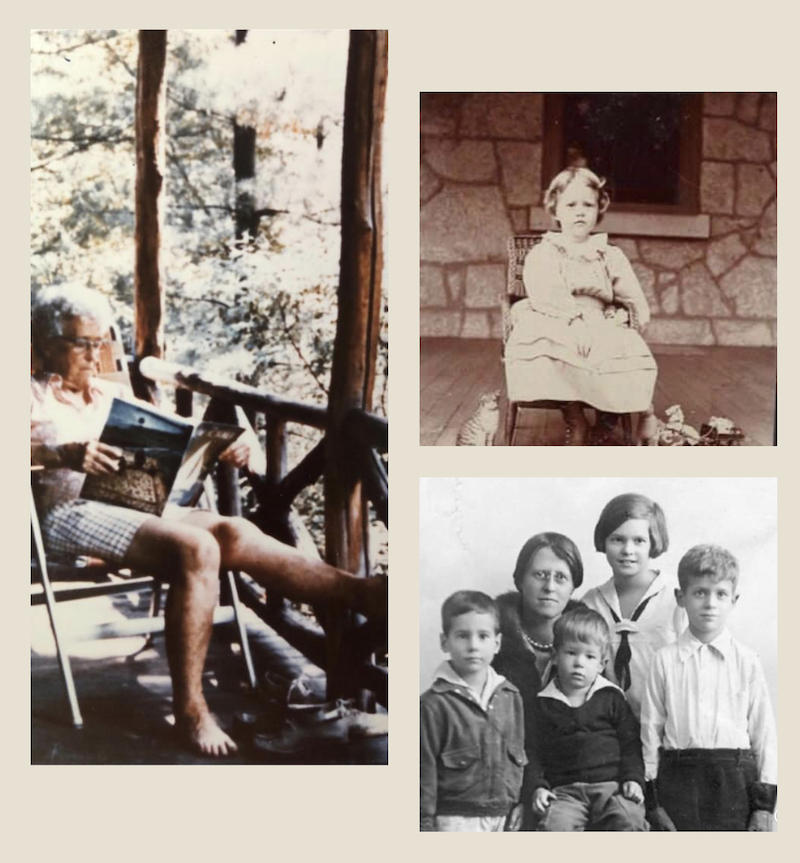 My grandmother Rebecca Carter Nicholson was born on December 2, 1889 into an austere Philadelphia Quaker family but filled her life with art & poetry, tromping & canoeing in the NJ Pine Barrens, working alongside my grandfather to found & support various Quaker institutions, & lived in DC while my grandfather worked at the REA during the Roosevelt administration. She is pictured above at our family Cabin, on the porch of her childhood home in Germantown, & in a passport photo with her children Carolyn, John, Francis, & Christopher (en route to Switzerland) who are great grandparents to the 5th generation who may never meet each other but I hope feel a family kinship through our shared history.
That's all for this week my friends,
Cynthia
P.S. Hope you'll check out RepresentWomen's suggested reading: 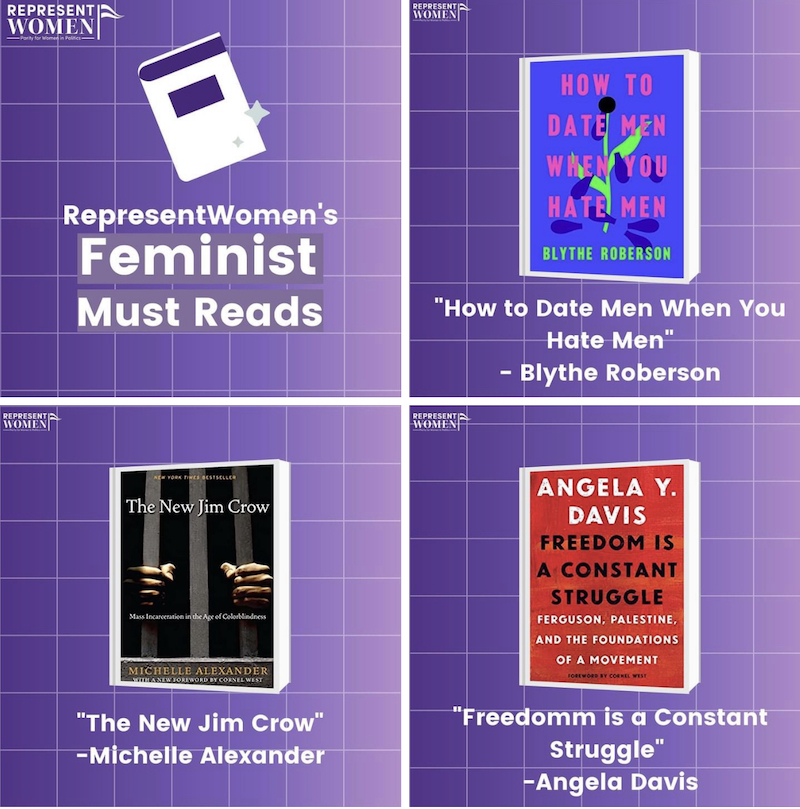