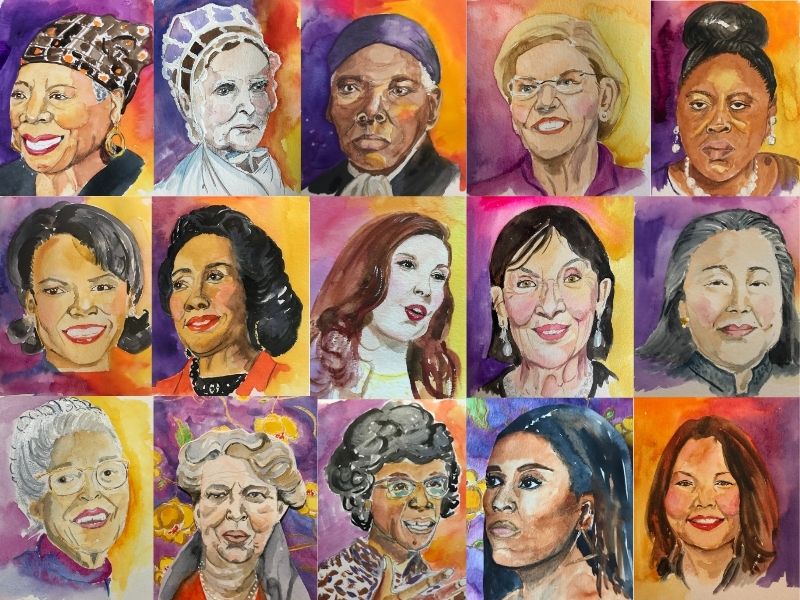 As we celebrate Women’s Equality Day commemorating the passing of the 19th Amendment, we must recognize this complicated milestone and acknowledge its connection to today’s limits on what can be achieved and who participates in our democracy. It must mark women’s continuing efforts towards achieving full equality, as we fight for the same educational and economic opportunities, work to close the gender pay gap, and contend against discrimination and harassment. It must serve as a reminder that the fight for the full participation of women of color in our democracy is far from over. The early suffragettes sought guidance and modeled many of their tenets from the Matriarchal Society and clan mothers of the Haudenosaunee Confederacy, believing that women voting would bring about political, economic, and reproductive freedom, and Black suffragettes focused on human rights and universal suffrage — the same issues we are still fighting for today. So, we can’t just celebrate equality while continuing to put our hopes — from voting rights to reversing the “she-cession” to our bodily autonomy — in the hands of others. We must demand the majority now.

We deserve nothing less than the majority in a truly reflective democracy. Women are 51% of the population and the majority of voters — with Black women’s voter participation the highest and women of color a growing powerful voting bloc — yet we are less than one-third of our nation’s leaders. It’s time to move from activists to lawmakers to seize the rights and the opportunities that were given to us. The fastest and most effective way to make our democracy more reflective and achieve these policy goals is for more women, especially women of color, to run for state legislatures, reaching a majority in each and every statehouse.

Why the legislature? Because the state legislature is the most consequential office of this decade. Billions of federal funds are being funnel through state legislatures for infrastructure, health, housing, farming and education programs. Nearly thousands of bills are being proposed on critical issues from restricted voting rights to access to abortions to caps on living wages, and they are being debated, decided, and made into law. With only 31.9% of state representatives and 28.4% of state senators being women, it’s inconceivable that our state governments could successfully serve everyone in this country without women playing a major role. In fact, out of the 7,383 total legislative seats, women of color occupy an abysmal 8.2%.

We need to be laser focused on adding more women to the state legislatures, and we need to do it now. Our situation is a blatant contrast to countries like Rwanda, Cuba, Bolivia, and the United Arab Emirates, which are the only countries with 50 percent or more women in parliament in single or lower houses. The United States ranks 66th out of 193 countries for the same measure. While not solely responsible, our low ranking can be traced to our lack of intentional infrastructure or initiatives towards getting more women into political office compared to some other countries that have quotas or recruitment programs for female representatives. 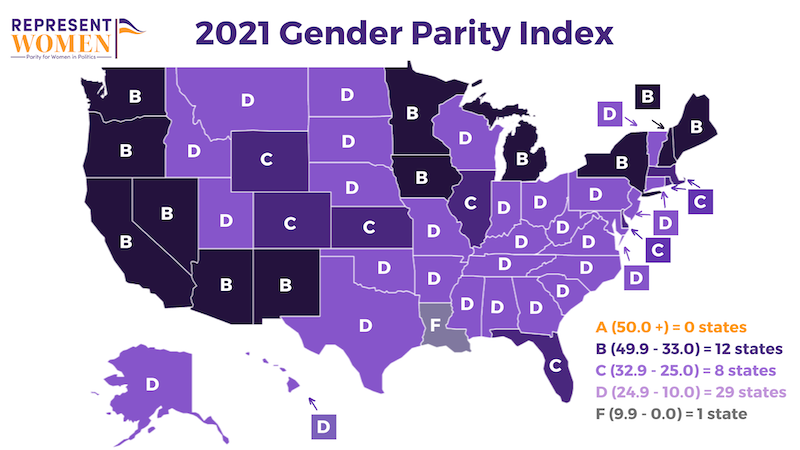 Many thanks to Courtney Lamendola & the RepresentWomen interns who collected the data for the 2021 Gender Parity Index that is now live! While no state gets an "A" on the Index this year, 12 states get a "B" and 8 states earned a "C" grade. Despite the popular narrative that women are making big gains in representation in the United States, the majority of states get a "D" on the Index in 2021. Please click here to learn more about the methodology for the GPI and click here to find out more about women's representation in your state. Here is the Maryland graphic that shows the impact of having zero women in the congressional delegation or in statewide executive office: 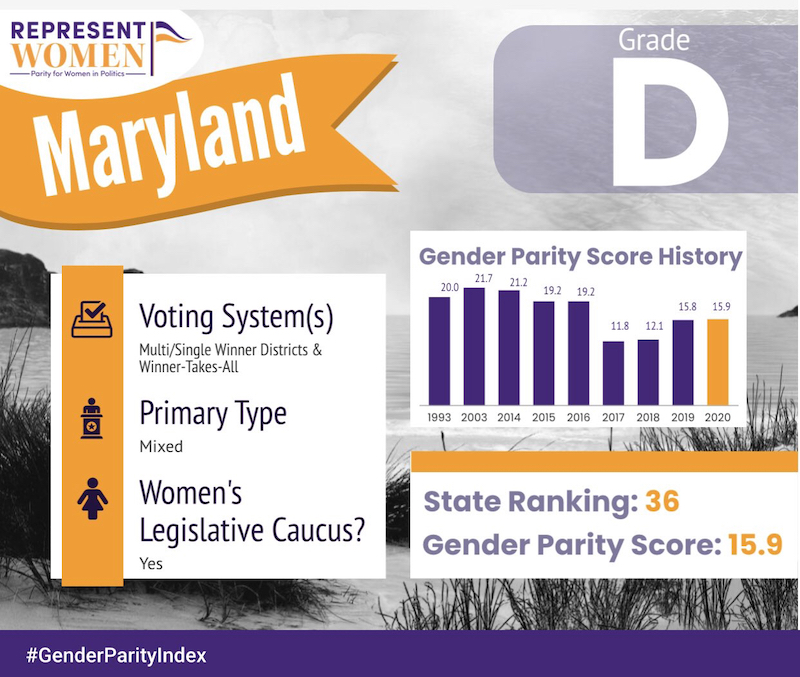 RepresentWomen's Gender Parity Index was the topic of this piece in The Fulcrum by Sara Swan:

While Kathy Hochul's induction this week as the first female governor of New York marked a significant milestone for women's representation, there has been little progress elsewhere in the United States to improve gender equity in politics.

Succeeding former Gov. Andrew Cuomo, who resigned following several accusations of sexual harassment, Hochul joins eight other women currently serving as governor. Only 44 other women in the nation's history have held that office, and 19 states have never had a woman governor.

Thursday marks Women's Equality Day, but over the last year, the U.S. has seen meager improvements in the number of women serving at the local, state and national levels. According to a report released Monday by RepresentWomen, just under one-quarter of all major elected officials in the country are women — an increase of less than 1 percentage point from 2020.

Each year the nonpartisan organization RepresentWomen uses its Gender Parity Index to analyze underrepresentation in politics. States are ranked based on how many women currently hold, or within the last two terms have held, elected office.

Globally, the U.S. ranks 67th in legislative gender parity. While women make up 51 percent of the country's population, just 27 percent of House members are women. Other countries, the RepresentWomen report notes, have reformed their electoral systems to advance women's political leadership at a faster rate.

"To reach and sustain gender parity in our lifetimes, we must pivot toward systems reforms," said Cynthia Richie Terrell, founder and director of RepresentWomen. "Changing rules and systems in the fight for equality is part of the American tradition. From the 19th Amendment to the Americans with Disabilities Act, we have a precedent of systemic and structural solutions to ingrained inequality." 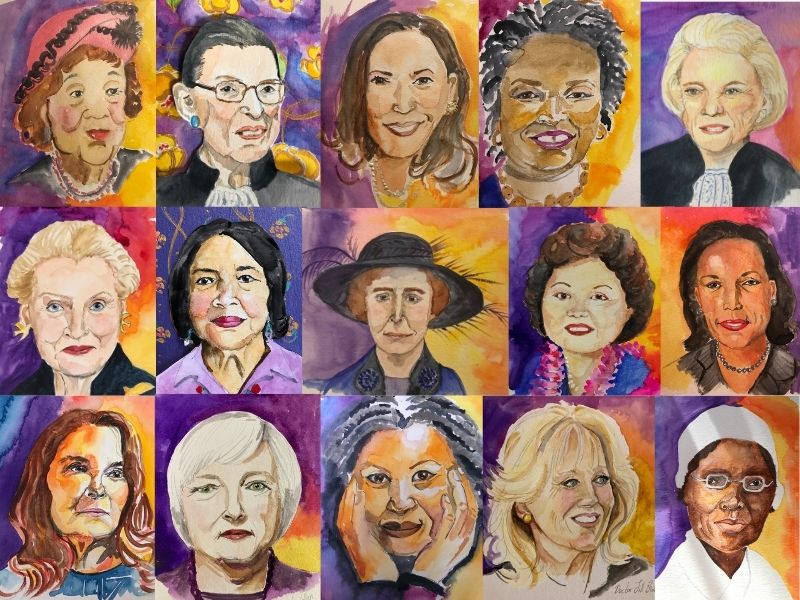 “We celebrate their extraordinary courage and resolve, and rededicate ourselves to the work we still have ahead of us to protect voting rights across our country,” Biden’s proclamation reads.

In his proclamation, Biden lauded the strides the nation has taken over the last century to advance access to the franchise, from the Voting Rights Act to efforts to secure voter protections for Americans who speak languages other than English.

Such voter protections have been particularly critical for women, he said, “who often face increased caregiving demands and take on a disproportionate amount of low-wage and inflexible work, making it harder to take time off to vote in-person or wait out longer lines at the polls.” Women and LGBTQ+ people are also hardest hit by voter ID laws, as a result of name changes or IDs that don’t accurately reflect a person’s gender. 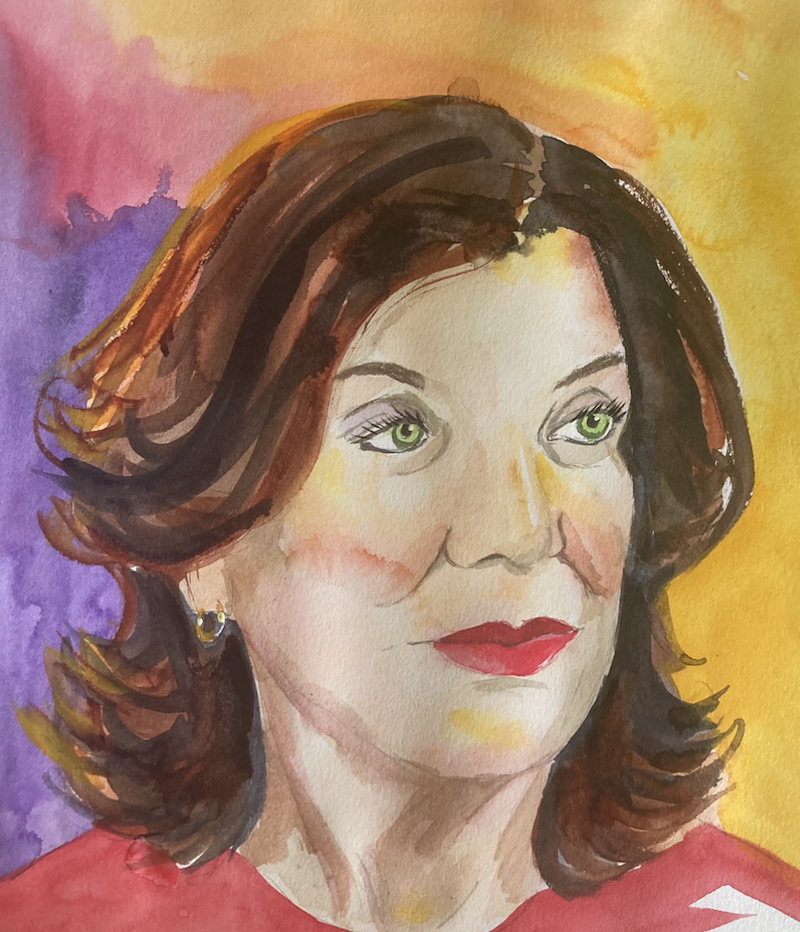 New York governor Kathy Hochul, painted by Melanie Humble
According to this story in The New York Times, NY governor Kathy Hochul has appointed 2 women to top leadership positions in her cabinet in addition to her selection of Brian Benjamin as her lieutenant governor:
A day before Kathy Hochul becomes the first female governor of New York State, she announced that her top two aides will be women, too.

Karen Persichilli Keogh, who is known in political circles by her initials “KPK,” will become secretary to the governor, the highest-ranking appointed position in the state. She will succeed Melissa DeRosa, who was the first woman to hold the position. In a tweet, Ms. DeRosa described Ms. Keogh as a “superstar.”

Ms. Keogh’s appointment, along with the selection of Elizabeth Fine as Ms. Hochul’s counsel, means that a trio of women will be at the helm of the executive branch roiled by allegations of sexual harassment by the outgoing governor.

Both Ms. Keogh and Ms. Fine are longtime political hands whose experience in New York City and Washington could help Ms. Hochul navigate the state’s opaque political waters.
Finally, there were two international stories that caught my eye this week:
And one more story, this one from The Hill, on the new woman head of the AFL-CIO:
The AFL-CIO on Friday elected longtime labor advocate Liz Shuler as its new president.

The election comes after Richard Trumka, who led the labor federation for more than a decade, passed away earlier this month.

“This is a moment for us to lead societal transformations—to leverage our power to bring women and people of color from the margins to the center—at work, in our unions and in our economy, and to be the center of gravity for incubating new ideas that will unleash unprecedented union growth,” Shuler said in a statement Friday. 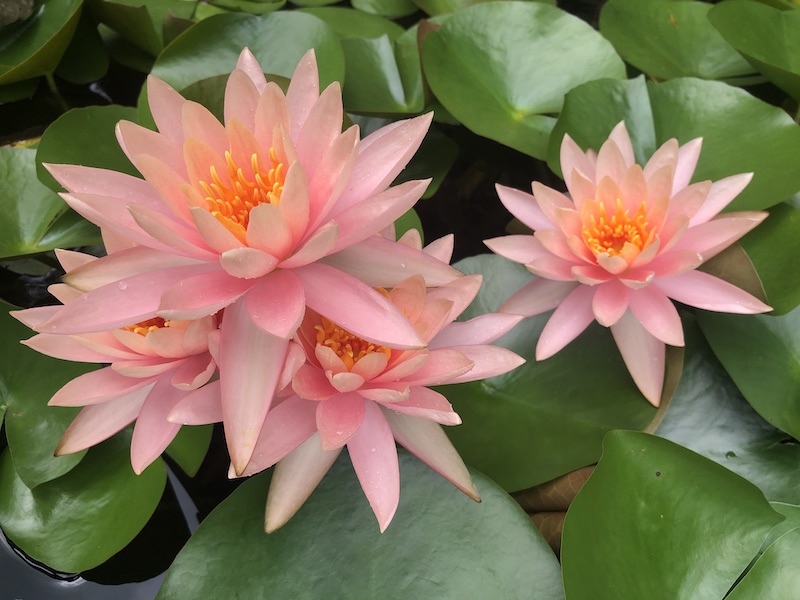 The waterlilies in my little pond are putting on quite an end-of-summer show! I am looking forward to all we can accomplish together in the months ahead,
Cynthia
P.S. We had another terrific class of interns this summer who are now returning to their campuses - some for the first time in a year - we wish them the very best! 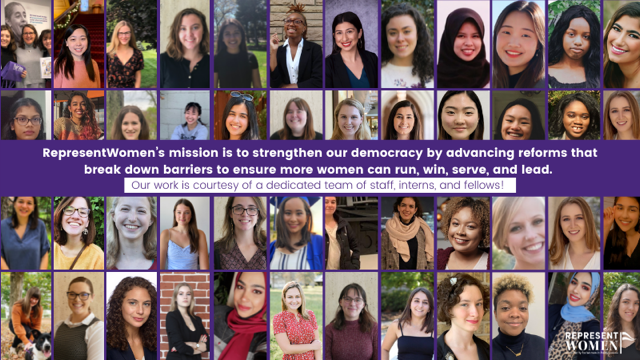