The observance of Women’s Equality Day not only commemorates the passage of the 19th Amendment, but also calls attention to women’s continuing efforts toward full equality. Workplaces, libraries, organizations, and public facilities now participate with Women’s Equality Day programs, displays, video showings, or other activities.

Joint Resolution of Congress, 1971
Designating August 26 of each year as Women’s Equality Day

WHEREAS, the women of the United States have united to assure that these rights and privileges are available to all citizens equally regardless of sex; and

WHEREAS, the women of the United States have designated August 26, the anniversary date of the certification of the Nineteenth Amendment, as symbol of the continued fight for equal rights: and

WHEREAS, the women of United States are to be commended and supported in their organizations and activities,

I am spending the weekend with an amazing group of legislators and reformers in Rochester, NY - yesterday a number of us had a remarkable tour of Susan B Anthony's home where she lived for 40 years. An incredible docent from the Susan B Anthony House & Museum regaled us with tales from Anthony's work for temperance, abolition, and suffrage - it was a very memorable afternoon: 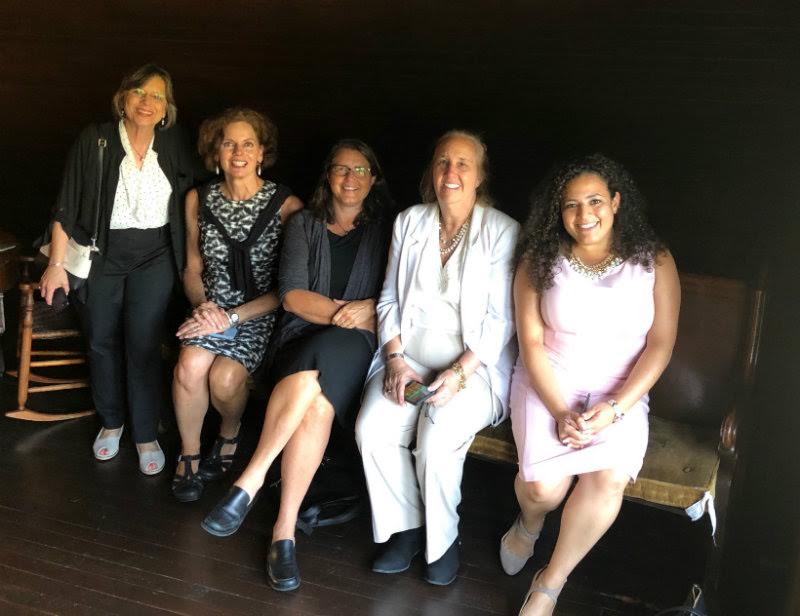 Women are continuing to win primary contests in the United States at an unprecedented rate - we will of course know more this fall and after the 2020 elections about how many of those seats women are able to win and retain but as of August 2018 the Center for American Women in Politics reports that:
Following primary elections in Alaska and Wyoming, women have secured 2,669 major-party nominations for state legislature seats across the country in 2018, according to data from the Center for American Women and Politics (CAWP). The previous record, set in 2016, was 2,649. Twenty-three women in Alaska and twenty-six in Wyoming claimed victory in their primary elections on Tuesday night, pushing the total number of state house nominations to 2,184 (the highest in history) and state senate nominations to 485. As of Wednesday morning, ten women candidates for Alaska’s state legislature are in contests that remain too close to call.
These new breakthroughs join a growing list of high-water marks for women in politics this year, including the most women filing for gubernatorial (62), U.S. House (476), and U.S. Senate (54) races and the most women winning nominations for governor (14), U.S. House (200), and U.S. Senate (19). Seven states still remain on the 2018 primary calendar, so these record numbers may not have crested yet.
“Today’s new record could indicate a break from the stagnation in the number of women’s state legislative candidacies we’ve seeing since the mid 1990s,” says CAWP’s director Debbie Walsh. "Without more women running, women can’t make gains at this important level of office.”
The Washington Post covered the 'groundbreaking diversity' of female gubernatorial candidates in this election cycle:
Stacey Abrams gained national prominence this year when she became the first African American woman to win a major party nomination for governor. If she wins in November, she will make history once more. But Georgia’s Democratic nominee is not the only woman who is breaking barriers at the gubernatorial level.

In fact, the field of female candidates for governor in the 2018 election cycle is unprecedented in its diversity.

This year, 36 states will hold elections for governor. Out of a total of 14 women who have won their primary so far, five gubernatorial nominees are women of color. In addition to Abrams, there is Michelle Lujan Grisham (D) in New Mexico, who was the first Latina woman elected to Congress from the state; Paulette Jordan (D) in Idaho, who would become the first Native American governor if elected; Hawaii Republican Andria Tupola, who is of Samoan and Native Hawaiian descent; and Lupe Valdez (D) in Texas.

According to the Pew Research Center, the majority of Americans think that more women running for Congress is a good thing:
Women are running for Congress in record numbers this year, and most Americans say this is a good thing. But there’s little consensus among the public about how – or whether – things would change if more women were elected, according to a new Pew Research Center survey.

Looking beyond 2018, more than four-in-ten Americans say they personally hope a woman will be elected president in their lifetime, but there is some evidence that whether a potential female president is a Republican or a Democrat matters.

About six-in-ten Americans (61%) say it’s a good thing that more women are running for U.S. Congress this year than in the past, while a third say this is neither good nor bad. Just 5% see this as a bad thing.

Women are more likely than men (68% vs. 54%) to view the increased number of female congressional candidates as a positive development, but views are divided even more sharply along partisan lines. Eight-in-ten Democrats and Democratic-leaning independents say it’s a good thing that more women are running; about half as many Republicans and Republican leaners (39%) say the same. To be sure, more women are running on the Democratic side than the Republican side.

While most Americans say it’s good that more women are running for Congress this year, fewer than half say that, if there were more women there, Congress would do a better job of dealing with the country’s problems (39%); the tone of the political debate in Washington would be more respectful (36%); or that there would be more openness and transparency in government (34%). About half or more say that the number of women in Congress doesn’t have much to do with each of these areas.
Amidst all the exciting news about historic numbers of women running for office there are of course many challenges that women continue to face.
The Washington Post wrote this piece about the difficulties that female candidates face raising the money necessary to run viable campaigns:
Even as a record number of women run for office this year, female congressional candidates overall are lagging behind their male counterparts when it comes to pulling in campaign cash, according to a Washington Post analysis of federal campaign finance reports.

Men running for the House had collected almost 17 percent more on average than their female counterparts by the end of June, The Post found in its examination of candidates who showed viability by raising at least $50,000.

One group of female candidates who outraised their male counterparts: Democratic women seeking office in districts that lean left — a sign of the enthusiasm in the base to support women this year. In those districts, women collected an average of $97,000 more than men, The Post found.

While Claire Cain Miller wrote in the Business Section of The New York Times about the costs of motherhood that are on the rise - this piece is worth a read because these costs have an enormous impact:
An economic mystery of the last few decades has been why more women aren’t working. A new paper offers one answer: Most plan to, but are increasingly caught off guard by the time and effort it takes to raise children.

The share of women in the United States labor force has leveled off since the 1990s, after steadily climbing for half a century. Today, the share of women age 25 to 54 who work is about the same as it was in 1995, even though in the intervening decades, women have been earning more college degrees than men, entering jobs previously closed to them and delaying marriage and childbirth.

The new analysis suggests something else also began happening during the 1990s: Motherhood became more demanding. Parents now spend more time and money on child care. They feel more pressure to breast-feed, to do enriching activities with their children and to provide close supervision.

A result is that women underestimate the costs of motherhood. The mismatch is biggest for those with college degrees, who invest in an education and expect to maintain a career, wrote the authors, Ilyana Kuziemko and Jenny Shen of Princeton, Jessica Pan of the National University of Singapore and Ebonya Washington of Yale.

Finally, RepresentWomen interns put together this flyer about the role of Quakers at the Seneca Falls Convention held 170 years ago when the conversation about a women's right to vote was launched and these graphics about passage & ratification of the 19th amendment 98 years ago.

Have a terrific weekend wherever you may be!
Cynthia
P.S. Don't forget to save the date of October 11th for a RepresentWomen celebration in Washington, DC!