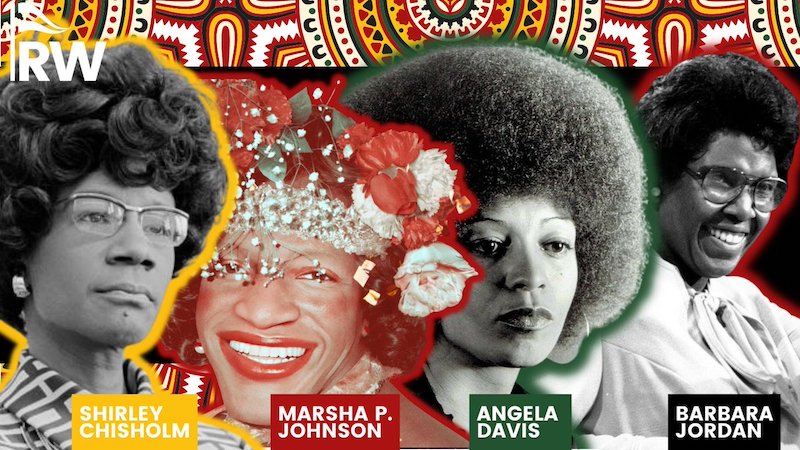 Happy Black History Month!
While there are countless Black women whom we should celebrate in February, the team at RepresentWomen has chosen four to highlight this week:
Shirley Chisolm began her legislative work when she was elected to New York's state legislature in 1964. In 1968 she ran for her district's seat in the United States House and won, becoming the first African American woman to serve in the body. Once in Congress, Chisholm championed expanding welfare programs such as food stamps and worked to protect reproductive health. She also co-founded the National Congress of Black Women. In 1972, she was the first African American woman to run for the Democratic Presidential nomination, winning 152 electoral votes.

Marsha P. Johnson was an outspoken advocate for LGBTQIA+ rights and was a crucial figure in the Stonewall Riots of 1969. Johnson was a founding member of the Gay Liberation Front and co-founded the activist group Street Transvestite Action Revolutionaries. Johnson was active at gay rights rallies throughout life and was present at the first Gay Pride rally in New York City in 1970. Johnson was also a familiar presence at other radical political actions. Johnson actively spoke to raise awareness about violence against the LGBTQIA+ community and participated in AIDS-relevant activism with AIDS Coalition To Unleash Power (ACT UP).

Angela Davis is an activist, author, and scholar who has contributed many great works about Race, Class, Feminism, and the United States Prison System. As a Marxist, she was a longtime member of the Communist Party USA (CPUSA). In 1991, she left CPUSA and founded Committees of Correspondence for Democracy and Socialism. She has been a prominent voice for social justice activists and scholars by continually speaking out against the prison industrial complex, a term that she coined. She believes in prison abolition, a society where prisons are no longer necessary, focusing on rehabilitation and not incarceration.Today, Davis is a professor at the University of California, Santa Cruz.
Barbara Jordan was an American educator, lawyer, and politician. She was the first Black woman to be elected to the Texas State Senate and later became the first southern African American in the United States House of Representatives. She served as the chair of the committee on immigration reform. She played a prominent role during the impeachment hearing for Richard Nixon. She is known for eloquent opening speeches and was the first woman keynote speaker at the Democratic National Convention.

Notable Black women wrote President Biden a letter to express their support for his commitment to nominate a Black woman to fill the vacancy on the Supreme Court according to this piece on CNN by Jasmine Wright:
More than 100 influential Black women leaders thanked President Joe Biden in a letter for honoring his promise to nominate a Black woman to the Supreme Court, who if confirmed, would be the first to ever sit on the bench.

The letter, delivered to the White House Friday, is intended to both praise the president and express their readiness to mobilize around the eventual Black woman nominee ahead of what's expected to be a rough confirmation process.


"We believe that it's important that Black women show our appreciation to the President for unequivocally keeping his word on this promise that he made during the campaign and to lay down a marker that says, 'This woman, we will have her back,'" Karen Finney, a senior Democratic strategist and CNN contributor who helped craft the letter, told CNN in an interview. "It's also an expression joy."

The letter applauded Biden for "seizing this moment in history to lead with a vision of America at its best and ensuring that the leadership of our democracy reflects a diversity of lived experiences at the highest levels." 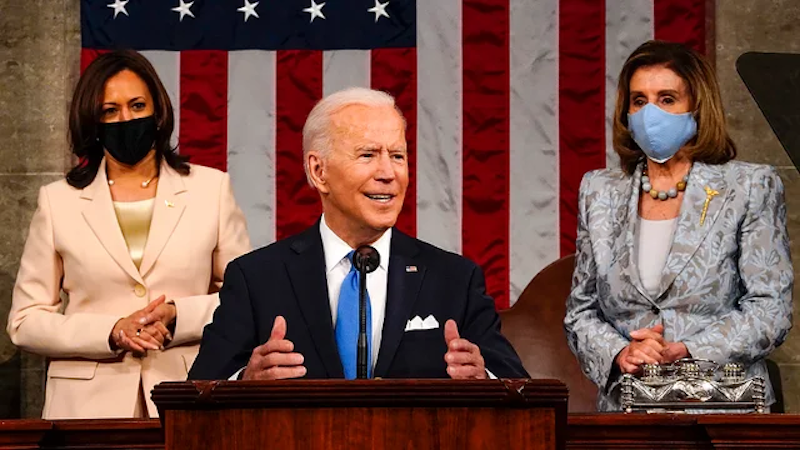 From The Hill
Lindsay L. Rodman wrote an excellent piece in The Hill about President Biden's reliance on his old-boys network especially on matters of national security and the under-representation of women's voices in the Biden administration:
The Biden administration deserves significant credit for the progress it has made. But we are not at gender parity. For women who see and experience these power imbalances, statements that we are at-or-near gender parity feel like gaslighting.

I often get asked why gender parity is so important in national security leadership. My first inclination is to think: Really? In 2022 are we still questioning why over 50 percent of the population should have access to the same options and opportunities? But, I get asked the question often enough that I always attempt a straightforward answer.

First, it leads to better decision-making within leadership teams, as has been shown time and again. But, you do not see the benefits of gender inclusion until you achieve critical mass; one woman is not likely to make a difference. Second, we are leaving over 50 percent of the talent on the table, untapped or under-tapped. Third, over 50 percent of tomorrow’s potential leaders are less likely to strive for these positions if they seem unattainable. Fourth, there is the issue of fundamental fairness. Fifth, we are willfully ignoring what other democracies are embracing. The United States is an embarrassing 41st in the Council on Foreign Relations’ Women's Power Index. I could go on… 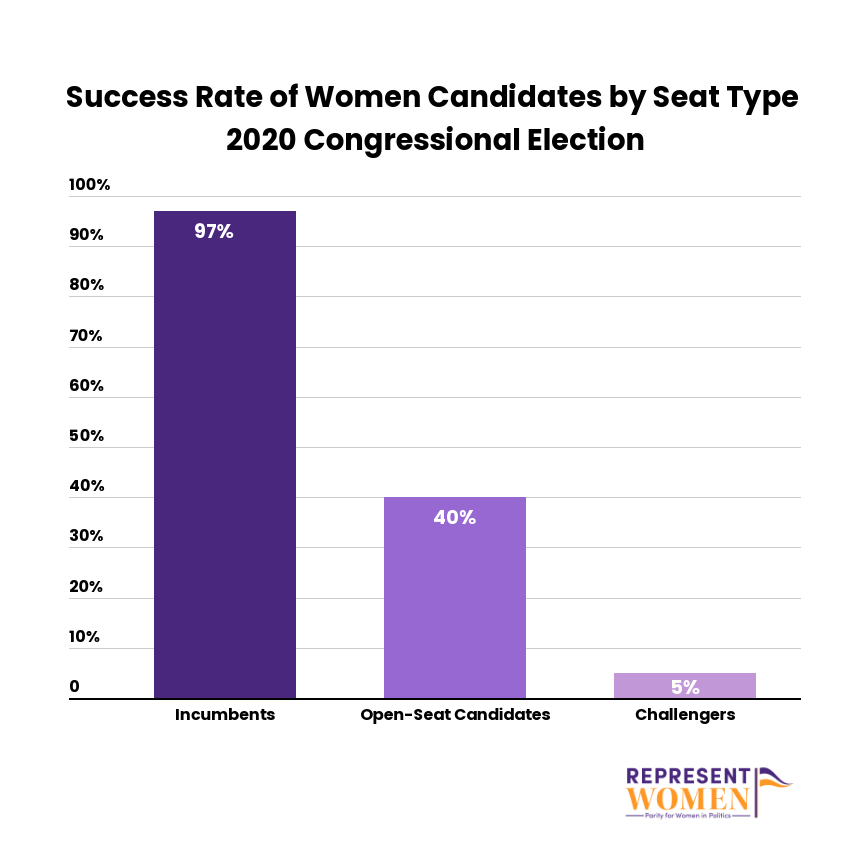 The chart above illustrates that women running as incumbents have a powerful advantage while women running for open seats won 40% of those races in 2020 but just 5% of women who run as challengers in 2020 won.
ReflectUS Coalition CEO  Tiffany Gardner and Amanda Hunter, executive director of the Barbara Lee Family Foundation, co-wrote an article for Newsweek on the power of incumbency:
Incumbency is a tool of political power—one that protects the status quo. People who hold office longer are often more influential, have larger political networks and build substantial campaign funds which are used to support their political party and advance their agenda. Political parties benefit because incumbents in non-competitive districts cost less to re-elect than candidates running for the first time, yet incumbents still raise significantly more than challengers. This saves parties money for their competitive races.

There are solutions to this problem. For instance, many states have sought to dismantle the power of incumbency by enforcing term limits and placing restrictions on campaign contributions. Congress has yet to establish term limits, meaning more men rise to power and hold their seats longer as they become fixtures in political spaces.

Women incumbents can overcome the challenges they face. But the power of incumbency has real consequences for women, as first-time candidates or incumbents themselves. When working within a broken system designed to protect the status quo—men's political power—it is important to be clear-eyed about the feedback loop of incumbency. If our nation ever expects to reflect a representative democracy, incumbent protection can no longer be the standard. 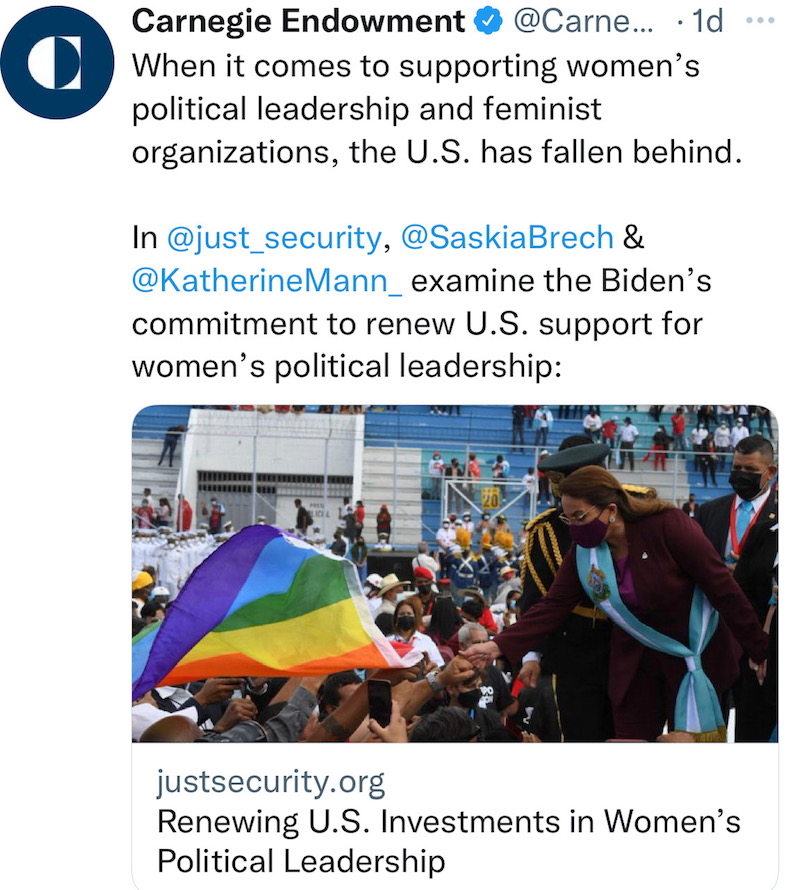 Saskia Brechenmacher and Katherine Mann wrote a compelling piece for the Carnegie Endowment's online forum, Just Security, about the imperative for "an integrated approach" to advancing women's political leadership:

Globally, attacks on democracy and struggles over gender equality are often intertwined.Of course, women’s political representation alone does not automatically strengthen democracy, especially since autocrats can co-opt women’s leadership to consolidate their political power. Nor do multi-party elections alone ensure the empowerment of women or other marginalized groups. But feminist groups and women’s movements are often on the frontlines of struggles against rising authoritarianism and militarization, from Sudan to Thailand to Myanmar. Moreover, many of the hurdles undermining gender equality in politics – such as entrenched socioeconomic and ethnic hierarchies, the use of violence to advance political goals, and personalistic and corrupt governance – are, at their core, failures of democratic governance, which have profoundly gendered effects.

Looking ahead, it is therefore critical that gender equality is integrated into the Biden administration’s broader democracy agenda. Interventions focused on women’s political participation are often too small in scale and too short-term to create lasting change. Frequently, they are also insufficiently integrated into higher-level diplomacy and the parallel domains of development and security assistance. Although many donor governments and democracy assistance organizations have made formal commitments to “gender mainstreaming,” these are not necessarily backed up with the necessary resources, staff, and high-level leadership. The Women, Peace, and Security (WPS) agenda exemplifies this trend. The U.S. government now has a comprehensive policy framework focused on WPS implementation, yet the agenda as a whole remains undervalued, underfunded, and weakly integrated into parallel foreign policy processes such as the Global Fragility Act.

To overcome this challenge, the Biden administration should ensure that newly launched global initiatives – such as USAID’s Partnerships for Democracy, which seeks to help governments going through democratic openings deliver tangible services to citizens – are also used as opportunities to reinforce gender equality and women’s leadership. The administration’s global and country-level democracy strategies should similarly integrate a strong gender lens, drawing on the ambitious commitments set out in the National Strategy on Gender Equity and Equality and the expertise of the Gender Policy Council. Lastly, the administration can do much more to institutionalize attention to gender across the national security and foreign policy apparatus, by requesting more gender- and WPS-focused funding from Congress, launching agency-specific implementation plans (with budget requests) for the national gender equality strategy, and including gender experts in National Security Council meetings and policy processes focused on broader democracy and conflict challenges.

There was a very interesting report from The German Marshall Fund by Corinna Hörst, Sabrine Dao, Pelle Geertsen. Sarah Rahman & Mekayla Tucker on women's representation and political power in the European Parliament:
In order to understand why gender representation in the European Parliament remains imbalanced, it is necessary to unpack and analyze the institution, including its committees and subcommittees, and country and political groupings. With the mid-term rotation in committee chairs due in early 2022, now is a good time to look more closely at the gender balance in this institution.

In 2019, 308 women were elected to the parliament, taking women’s representation to its highest level of 41%, a figure that with Brexit later dropped to 39.5%. Only Finland and Sweden have a majority of women MEPs, while Denmark, Latvia, Luxembourg, and Slovenia have achieved parity. This shows that gender mainstreaming is not fully internalized at the member-state level, making it more difficult for the least equal countries to follow the EU’s standards toward gender equality in their parliamentary representation.

The representation of women differs across the political groups in the European Parliament. The most gender-equal one is the Greens/European Free Alliance group with 49% of its MEPs being women, followed by other left and center groups, with the more right-wing groups—Identity and Democracy, the European People’s Party, and the European Conservatives and Reformists—having higher male representation.
Milestones 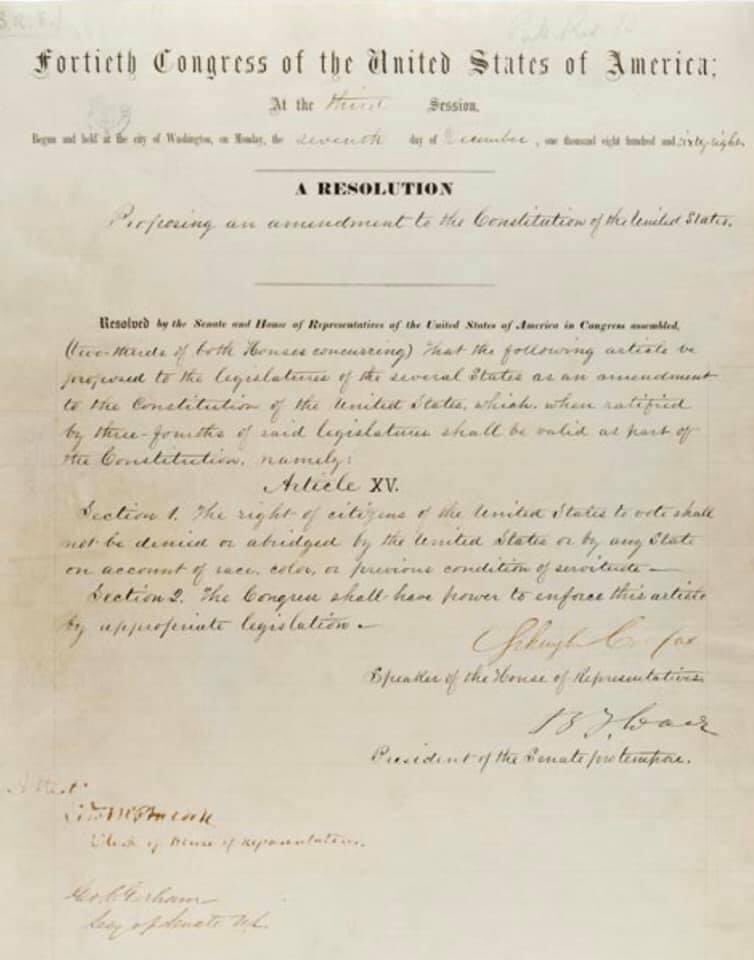 The 15th Amendment to the United States Constitution, that granted Black men the right to vote, was ratified on February 3, 1870. 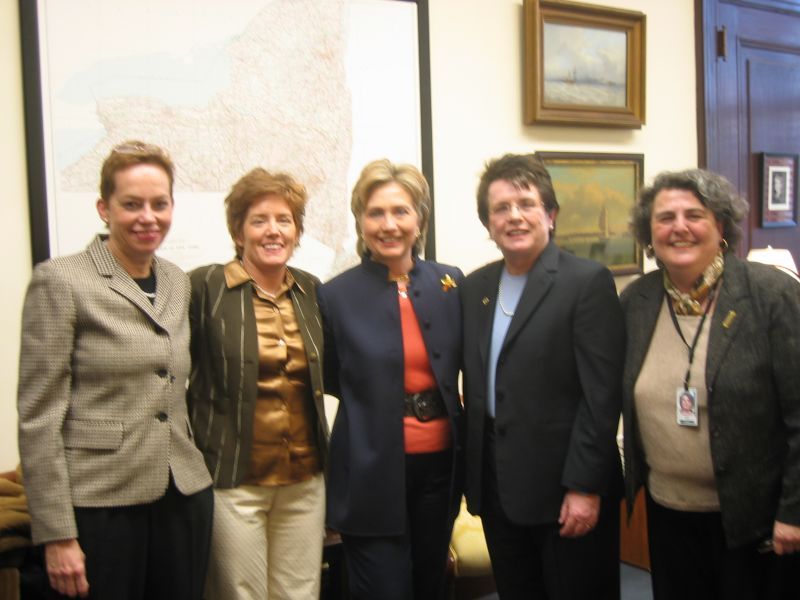 Photo from Tuti Scott's LinkedIn page
Amazing ally and women's rights advocate Tuti Scott shared an amazing post about Title IX on National Girls and Women in Sports Day that was held this week:
50 years of Title IX is being celebrated across the country today on National Girls and Women in Sports Day.  The image is a flashback from 22 years ago when Founder Tuti Scott was advocating for the federal civil rights law Title IX on NGWSD with fierce leaders including Billie Jean King and Senator Clinton.  With more than 15 trips to DC, Tuti and the !Women's Sports Foundation leaders and staff and other advocates had extensive conversations educating so many congresspeople and, yet, today 51% of the population is still not resourced equitably nor protected from harassment inside federally funded institutions. 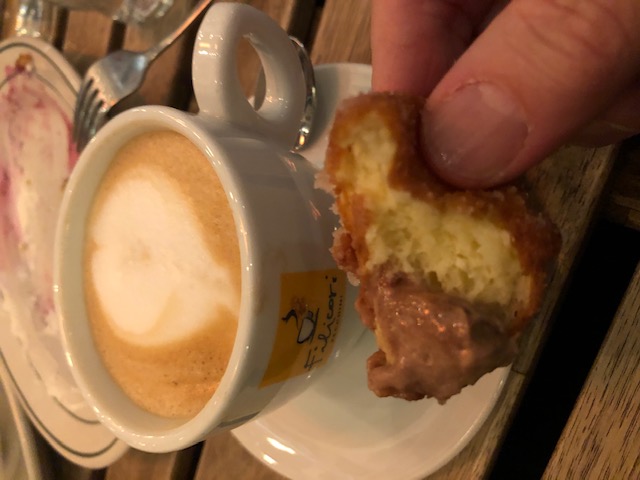 Delicious Bombolini at Rosemary's on the Lower East Side of NYC!
That's all for this week my friends,
Cynthia
P.S. Check out this week's suggested reading from the team at RepresentWomen and register now for RW's Democracy Solutions Summit! 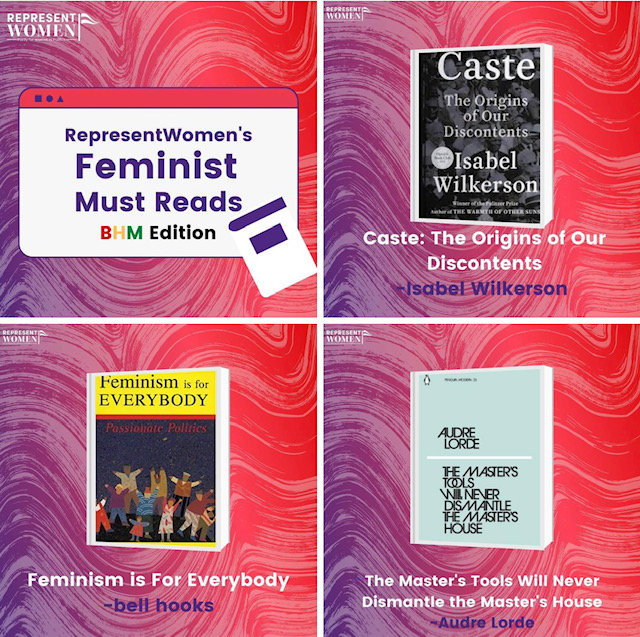