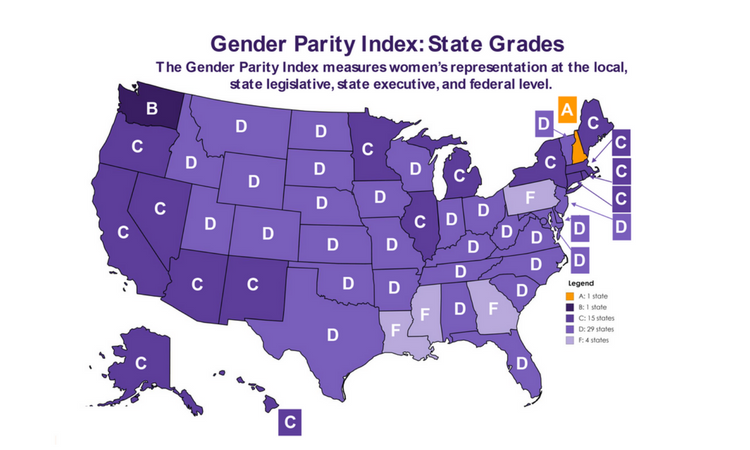 Representation2020, a nonprofit that advocates for institutional reforms to level the playing field for women candidates, enabling them to run, win, serve, and lead effectively, has released its latest analysis on the underrepresentation of women in elected office, quantified through the Gender Parity Index (GPI). The GPI rates women’s recent electoral success at the local, state, and national levels, and the 2017 report finds that women are underrepresented at all levels of government.

According to the group, as of June 2017, the median Gender Parity Score is 18.6 out of 100, barely up from the 2015 score of 18.1. The GPI ranks New Hampshire first and Mississippi last in women’s political representation. Out of all 50 states, 33 have a Gender Parity Score below 25, giving them a grade of D or F.

Because of their unique status as a territory, the U.S. Virgin Islands did not receive a formal score, but the GPI still tracks their progress towards gender parity. On the federal level, the Virgin Islands represent women better than many states. The current delegate to the U.S. House is a woman, Stacey Plaskett (D), and her predecessor, also a woman, served from 1997 to 2015.

However, the Virgin Islands have never elected a woman as governor. Currently, only three of the 15 state legislative seats are held by women. In order to progress towards gender parity, the Virgin Islands can adopt structural reforms and increase their efforts to recruit, train, and support women candidates for office, says Representation2020.

“Changing rules and systems to create equality is part of the American tradition,” notes Cynthia Richie Terrell, Representation2020 founder and director. “To win gender parity in our lifetimes we must pivot to system reforms that include gender targets for PACs and political parties so more women run, fair representation voting systems so more women win, and updated legislative practices so more women can serve and lead.”