RepresentWomen’s latest research concludes that commitment to gender-balanced appointments will increase women's representation today and for decades to come.

Takoma Park, MD - (July 7th, 2022) Represent Women released a Gender Balanced Appointments Policy Toolkit, analyzing the barriers and impacts of political appointments. Today, men make up the majority of state cabinet members, while women are consistently underrepresented. The strategies outlined in this new research are proven to correct this underrepresentation. 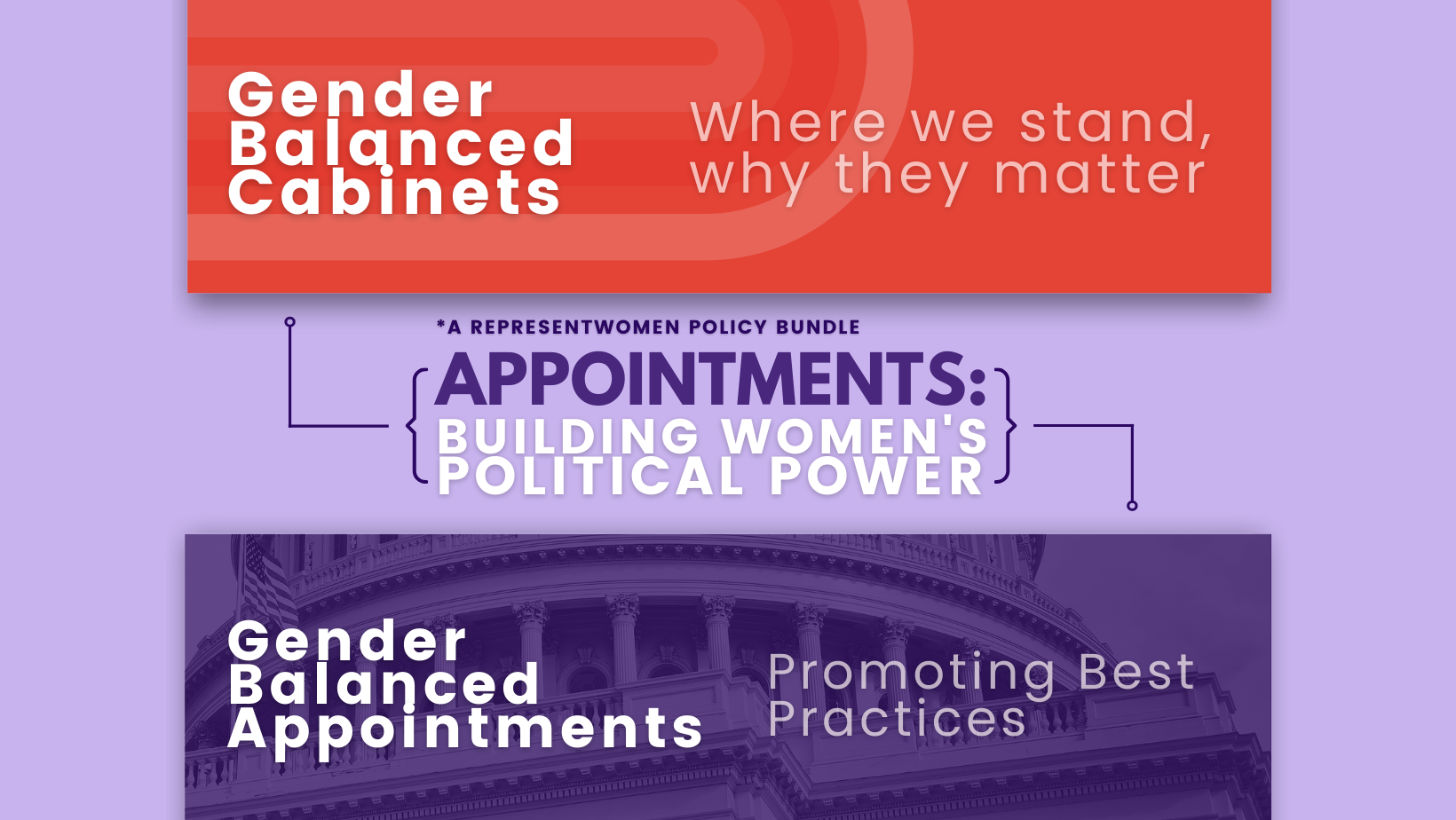 Based on recent political events, state governments and cabinet members hold an increasingly vital position of power: running state agencies and serving as trusted advisors to the governor, helping them make crucial decisions. In nearly all states, cabinet members are appointed by the governor. In addition to their impressive qualifications, many women bring a necessary perspective shaped by their lived experiences as women in their states. RepresentWomen asserts that appointed positions are an integral and viable pathway to future party leadership and elected positions. Increasing gender diversity in the cabinet improves women's representation in the present and for decades to come as more appointed women move further through the electoral pipeline.

On the importance of this work, RepresentWomen research Director Courtney Lamendola said, “Executive appointees include some of the most powerful leadership positions in the country, but it isn’t always clear who these appointees are and how they are selected - especially at the state and local levels. In light of recent Supreme Court rulings shifting power from the federal government to state governments, it is more important now than ever to know who holds power in each state and what needs to change to bring more women into positions of political power and leadership.”

For the first part of this policy bundle, RepresentWomen analyzed the demographic makeup of  state cabinets in their latest report, “Gender Balanced Cabinets: Where We Stand and Why They Matter." For all but one state researched (Florida, which elects its cabinet), the governor appoints all or most cabinet members. The average state cabinet has a membership of less than 40% women. Only 12 states have achieved gender balance in their cabinets.

RepresentWomen’s report assesses various factors regarding the gender make-up of state cabinets. Political leaning is highly correlative, with republican led states appointing more male-dominated cabinets. Geographic location does not seem to impact whether a cabinet is gender-balanced – states from the Rockies, the coasts, to the heartland all have a wide range of gender representation.

However, demographic-wise, Women governors are more likely to create gender-balanced cabinets. On average, people of color make up less than 40% of state cabinet members, and the gender of governors has little impact on whether their cabinet will reflect a state's diversity. Unlike gender, which is consistently male-dominated across the country, race varies significantly from state to state.

With this research, Representwomen asserts it is essential that women have an increased role in shaping a state's services, from the lowest to the highest levels of government. Activists and gatekeepers alike must move forward with intentional actions and data-backed best practices to appoint more women to cabinet positions. Greater representation of all women won’t happen through mentorship alone; governments and gatekeepers need to advance rules changes that ensure more women are considered and selected for these offices.

On RepresentWomen’s work to promote gender-balanced policies, Programs Director Katie Usalis Said, “Learning from other initiatives is critical for grounding our program work in evidence-based strategies. Understanding possible paths for reform and key ingredients for effective practices helps ensure our work in advancing gender-balanced appointments is viable, scalable, and transformative. We know this resource will be as useful to the women's representation and democracy reform movements as it is to us!”

If you’ve found RepresentWomen’s research impactful, please consider making a donation! Our work relies on the generous support of people like you. Please visit representwomen.org/donate to support our work and help us achieve gender-balanced cabinets in our lifetimes!

RepresentWomen, founded in 2018, is a research-based advocacy group that promotes the use of data-driven strategies to identify and eliminate the structural barriers women face in seeking elected office and advance women's representation and leadership in the United States. Our worldwide research on women's political representation aims to fill knowledge gaps in gender equality and electoral reform sectors. With our study, we work in concert with our allies to address political barriers women face in politics to ensure that more women can RUN, WIN, SERVE & LEAD.