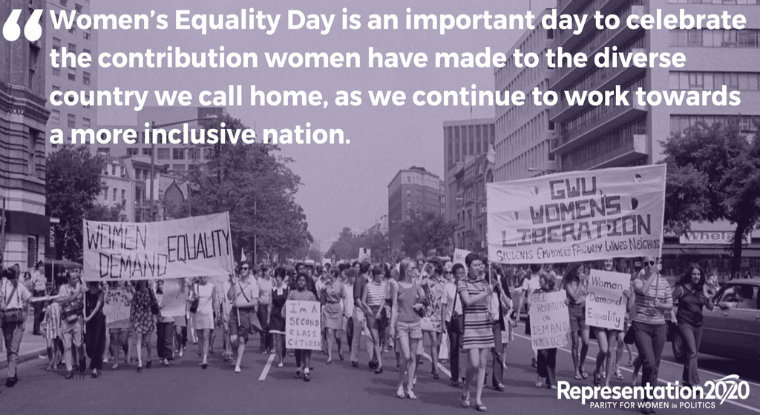 “If we get a government that reflects more of what this country is really about, we can turn the century -- and the economy -- around.” - Bella Abzug

Today marks the 45th annual Women’s Equality Day, decreed by a joint resolution of Congress in 1971. August 26th holds a special significance in the fight for women’s equality for multiple reasons, all of which contributed to lifting women up in the United States. Most historically, on August 26th, 1920, the 19th Amendment was signed into effect by the Secretary of State, following ratification by two-thirds of states. The 19th Amendment, after a nearly 100 year fight, affirmed that “The right of citizens of the United States to vote shall not be denied or abridged by the United States or by any State on account of sex.”

This was a major culmination of the fight for women’s rights and women’s equality, enfranchising most women in the United States. August 26th also marks the date of, exactly 50 years after the ratification of the 19th Amendment, the Women’s Strike For Equality March, in 1970. This was an event that spanned the nation, bringing together women to further the fight for equality.

The fight for women’s equality in the public sphere ostensibly began with the Seneca Falls Convention of 1848, which Representation2020 previously wrote about here. Suffragettes like Elizabeth Cady Stanton and Lucretia Mott, who had spearheaded the Convention, continued to work towards women’s suffrage, among other rights, including recognition of equality between men and women, and equal access to commercial and financial tools. The latter half of the 19th century was full of nonviolent movements to achieve equality: rallies and protests, newspaper and journal publications, and other advocacy initiatives to push for passing legislation to allow women to vote.

Finally, in 1919, this work came to a head. Legislation submitted in 1878 that would pave the way for women to vote was finally approved by Congress, and was given to the states for ratification. On August 18th, 1920, Tennessee became the 36th state to ratify the amendment, fulfilling the two-thirds rule for an amendment to be added to the Constitution, and on August 26th, 1920, the 19th Amendment was enacted. While not the defining measure of women’s enfranchisement, as many women of color faced other barriers well into the mid-20th century, the passage of the 19th Amendment marked a huge step forward for women in the public sphere. Representation2020 has written about the 19th Amendment in more detail here.

Fast forward 50 years to 1970 - the state of women has improved, albeit not as quickly as one would hope. Women have been elected to the House and the Senate, but only one Cabinet position has been filled by a woman at this point in history: Frances Perkins as Secretary of Labor in 1933, under Franklin Roosevelt. A majority of domestic housework falls on women, regardless of whether they hold positions outside the house or not, a sentiment outlined by feminist Betty Friedan in her 1963 book The Feminine Mystique. Time reported that “virtually all of the nation’s systems - industry, unions, the professions, the military, the universities, even the organizations of the New Left — [were] quintessentially masculine establishments.”

So how did feminists of 1970 take action? They organized a strike on the 50th anniversary of the passage of the 19th Amendment, on August 26th. Sponsored by the National Organization for Women, feminists across the country organized what was meant to be a “work stoppage,” where women would stop doing household tasks, such as cooking and cleaning, to draw attention to unequal pay and the unfair division of labor in American society. The largest march was in New York City, where women flooded Fifth Avenue, the Wall Street Stock Exchange, and the Statue of Liberty, calling for equality. Across the country, from Washington DC to Detroit to Los Angeles, women were joining the cause, taking to the streets to demand equal rights.

The events of August 26th, 1970 inspired Bella Abzug, a prominent feminist leader and US Representative from New York, to propose Women’s Equality Day to Congress. In 1971, the bill promoting the holiday was passed, and each sitting-President has issued a statement regarding Women’s Equality nearly every year since then.

Women’s Equality Day commemorates the work done by feminists in American history, while encouraging progression of women’s equality in both the public and private spheres of life. It is an important day to celebrate the contribution women have made to the diverse country we call home, as we continue to work towards a more inclusive nation.